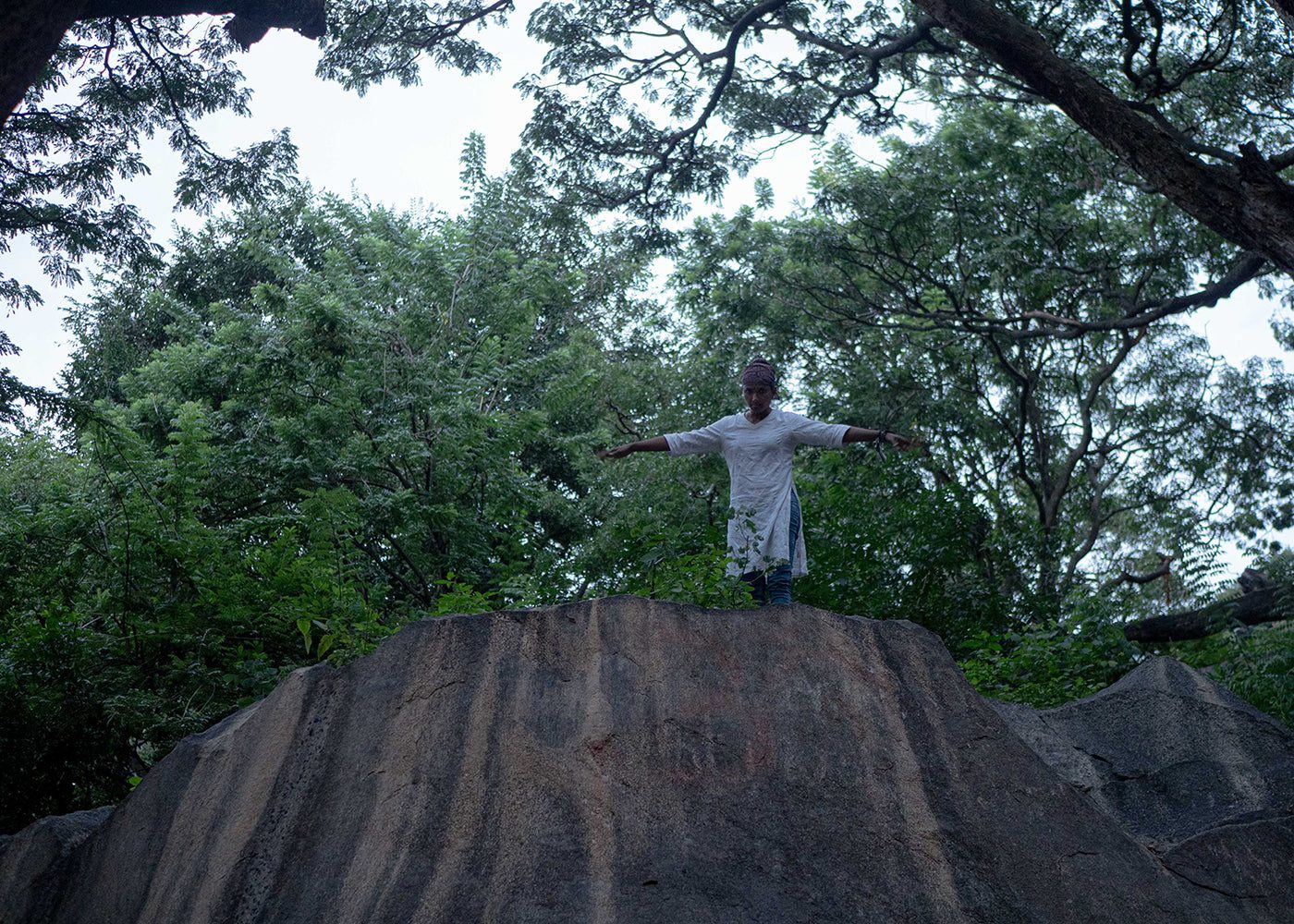 Commissioned by Fuel and directed by filmmaker JJ Abrahams, this intensely personal film, “Salt & Sugar” for Dance International Glasgow is beautiful, but bracingly unsentimental. At forty, critically acclaimed choreographer and dancer Hemabharathy Palani is looking back and taking stock of her life thus far. This film isn’t a linear, autobiographical piece though—it is lyrical and dense, showing Palani dancing, teaching and exercising in a variety of locations, such as forests, shimmering grassy fields and indoors in practice studios.

Fusing Bharatanatyam, that most exquisite form of traditional Indian dance, with contemporary dance, Palani’s body is testimony to lived experience. As a child, her voiceover says, she wanted to learn kung-fu, but was told she couldn’t because she was a girl. So instead dance became the means of self-expression—a way to rebel against the perceived limitations of femininity. She blends yoga and ballet too with her intial form of Kuchipudi dance, which she first learned as a child, but she finally settled mostly on Bharatanatyam. The individuality of improvisation is something that very much appeals to her, being able to create her own pieces through instinctive decisions on the placement of a hand, arm or leg. This speaks to her need for autonomy.

The exacting tilt of a head, the angular arms and hands, and all the small, skittish little leaps of Bharatanatyam, rely on complete control of the body. These moves weave shapes in the air, tell stories related to Hindu gods and goddesses, and are fuelled as much by facial expressions, as leaps and kicks. Palani kicks a leg out wearing white, covers herself in a diaphanous shawl and then flexes in more fluid, looser movements. She creeps through empty-looking cities, and is followed by the cameras into a classroom where she teaches steps to small children. This is all interspersed with clips of routines from old Bollywood films that take her back to her adolescence, and her first kiss in a cinema.

Yet there are many moments of visual poetry too—a hand curled into a ball is compared to a fluffy dandelion, the swish of red skirts seem abstract through close-ups. Freedom found within dance leads to many metaphors—of flowers, fire and ever-running water—elemental things. When she first encountered racism as a child, her mother was brokenhearted, but her father simply said, “Imagine the eyes without a black eyeball,” teaching her to embrace her beautiful skin colour.

Dance itself transcends the ignorance that is the backbone of prejudice, as it speaks to universality, to being human. As Palani herself says of self-acceptance, “Experiences have to travel through the body—it all has to go in and flow out. If it gets stuck in your body, that’s going to be dangerous.”

At times, I am reminded of the sharp contrast between this film, and the work of older choreographers and their film work for cinema and TV—for example, Anne Teresa De Keersmaeker and Sharon Eyal all appeared in films as older choreographers, and their work is still evolving, live and on screen. But the key focus here is on Palani herself, not her dancers, nor a retrospective of her work. She seems to be too much rooted in the here and now to indulge in any kind of nostalgia.

And the title itself is neither esoteric; nor a reference to anything mystical or profound—simply, it’s that Palani says that she has been training rigorously, and would like to get a six pack, and so her brother advised her to do it, and keep training every day, but to “cut out the sugar and salt!” Sometimes, the advice that resonates the most is the simplest.