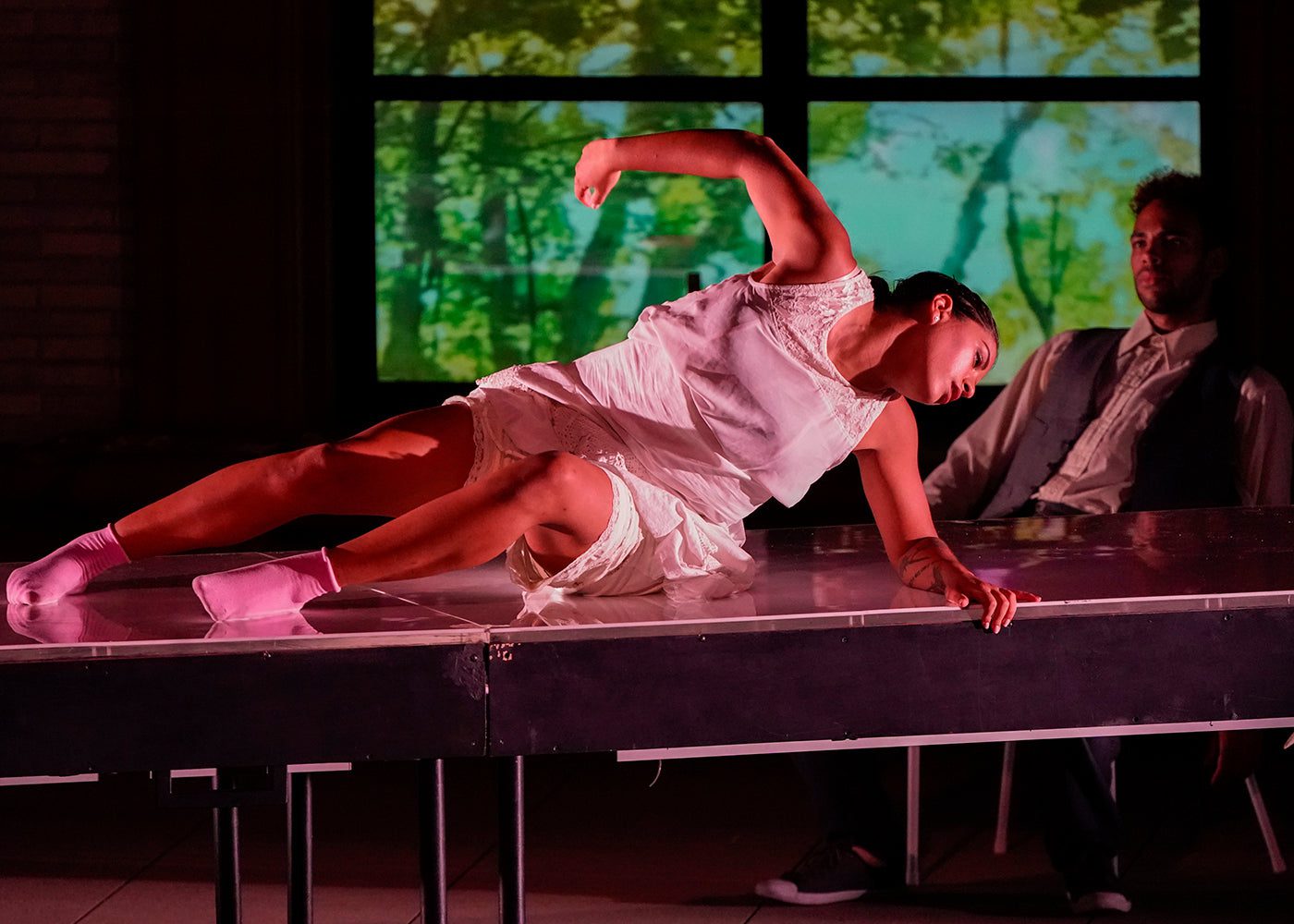 A pop-up performance of Heidi Duckler's “The Chandelier”

In real estate, it’s all about location, location, location. And so it’s been with Los Angeles-based site-specific goddess, Heidi Duckler, who founded her eponymous troupe in 1985. The intrepid choreographer has staged more than 200 works in places as far flung as Australia, Russia and Hong Kong and in such disparate—and iconic—L.A. locations as an abandoned jail (“C’opera,” from 2006, which took place at the Police Academy), “Governing Bodies” (2010), set at City Hall and, more recently, “Hildegard Herself,” a gorgeous 2019 work inspired by 12th-century abbess, composer and mystic Hildegard von Bingen, performed at the 1925 Gothic Revival-style St. John’s Cathedral.

And while Duckler’s abundant talent, commitment and resilience have served her extraordinarily well in melding dance with architecture, when asked to mount a piece on a stage—in this case, “The Chandelier” at the Wallis’ pop-up outdoor stage—her efforts proved less successful. (Originally slated to premiere at the venue in the spring of 2020 as a site-specific dance, it had to be radically reimagined by Duckler as a static, so to speak, work of art.)

Based on and inspired by Clarice Lispector’s 1946 Brazilian novel, The Chandelier (translated by Magdalena Edwards), published when the author was only twenty-three, because of the physical constraints of the very nature of a stage, was, perhaps, part of the reason the audience was unable to fully engage with the 70-minute creation.

A coming-of-age story featuring an isolated and disconnected protagonist, Virginia, danced beautifully by a heartfelt Nicole Flores, the thirteen scenes would have resonated more if Duckler had provided context in the form of projected translations or voice-overs to clue the socially-distanced spectators in on the scenario. After all, it’s difficult enough to animate a book’s monologues through bodies, much less discern characters through fragments of dialogue in order, as Duckler has noted, “to create a moving portrait of a family living amid the ruins of a colonial society.”

Composer/cellist Isaac Takeuchi set the mostly melancholy, if a kind of one-note tone, which was amplified and performed live to his own score where additional sounds such as winds, reeds or percussion might have helped. That said, Duckler created an amiable environment by making use of a funky hanging chandelier and two of her own light tables for the five performers, who reliably moved on, under and around them. Adding Kaitwan Jackson and Jessica Emmanuel, dubbed the “Nucleus,” who did heavy-lifting duties operating a free-standing retractable clothes line, and the work took on a “Project Runway” feel.

Seriously, Snezana Petrovic designed the garb, which ran the gamut from millinery fare, kitschy socks and cocktail/evening gowns to tennis whites, with more costume changes than seen at a Lady Gaga concert. In addition, several frocks, including those worn by Mother, a splendid Himerria Wortham, emitted the white magic vibe of Bahian Candoblé (a descendant of the African diasporic religion that developed in Brazil during the 19th century). Other Mother attire also appeared to typify the world of Orixás, ancient Brazilian deities that function, so Encyclopedia.com says, as “intermediaries between humans and the supreme being.”

Nothing, however, could have precluded Mama’s daughter from coming to, shall we say, a very bad end. Regardless, the mother/daughter duets were striking in their fervor, enhanced, as well, by some jazzy footwork. So, too, were the moves of Virginia’s brother Daniel (Javan Mngrezzo), whose outreached arm motif, coupled with his angsty elongated strides, added to the atmosphere of futility.

Okay, so Virginia yearns for big city life, descending into the world of clubbing, men and alcohol—lots of it, with hints of the date rape drug Rohypnol coming to mind—all leading to—no surprise—a debased ménage à trois. And it matters not that one of the dudes is Virginia’s boyfriend, Vicente (Alejandro Perez), who also, as it happens, enjoyed the company of Adriano (Adrian Hoffman), with this male duo looking as if they were conjoined—no kidding—by sucking on what looked to be the ends of, well, a French baguette, perhaps inaugurating a new type of fetish, baguettism.

Talk about disjointed storytelling! But it was clear that Virginia went home with both Vicente and Adriano—the trio deployed agreeable unisons, with table-bound pirouettes and gymnastics-like drunken staggerings—although she ultimately ends up with her true(?) love, Vicente, their neo-tango moves a study in obsession. The digital program notes indicate that in this scene, “ . . . love was like the inside of closed eyes,” with Virginia and Vicente also offering missionary position hook-ups before she passes out, literally, under the table.

“Chandelier” also featured Kam Ying Lee’s welcome projection designs through one of the Wallis’ paned windows. From 1950s sci-fi-like film imagery and green foliage to rain and Kara Walker-esque silhouettes, these served the production well, with our protagonist soon believing she was pregnant, “ . . . her body was aching, she’d vomited with wide, sad eyes,” enacted by, yes, Virginia retching.

More bad news ensues, with our gal not only learning that her grandmother has died, as scissors and family pictures are strung along the clothesline, but that she is also confronted by a bevy of stethoscope-bearing doctors, the cast wielding, as well, a long, translucent piece of white fabric: Virginia’s fantasy wedding veil or a future strait jacket?

There was one lone translation, recited in voice-over by Paula Rebelo (the work began with an introduction, that was, unfortunately, in Portuguese), that proved an apt metaphor for Virginia: “She was the dark room itself,” while additional props included twigged headdresses (shades of Frida Kahlo) and sand. But whether the latter was meant to symbolize the sands of time, the earth or a beach, one couldn’t tell.

What was evident, though, was Virginia’s death: As the tables were pulled apart and the sounds of trains reverberated from the score (think the final scene of Anna Karenina), Virginia, writhing in pain as she is caught between the slabs then coming together, is violently crushed.

While Duckler’s best work is defined by environments, “Chandelier” was decidedly hampered by this fixed location. Coupled with the lack of background information, the piece, though ambitious and skillfully performed, disappointed because it failed to deliver that jolt of emotion we seek from a live performance. One longs to see the work as it had originally been planned, with Duckler directing her dancers not only through their paces, but also through surprising—and unique—spaces.

Previous
Beyond the Muse