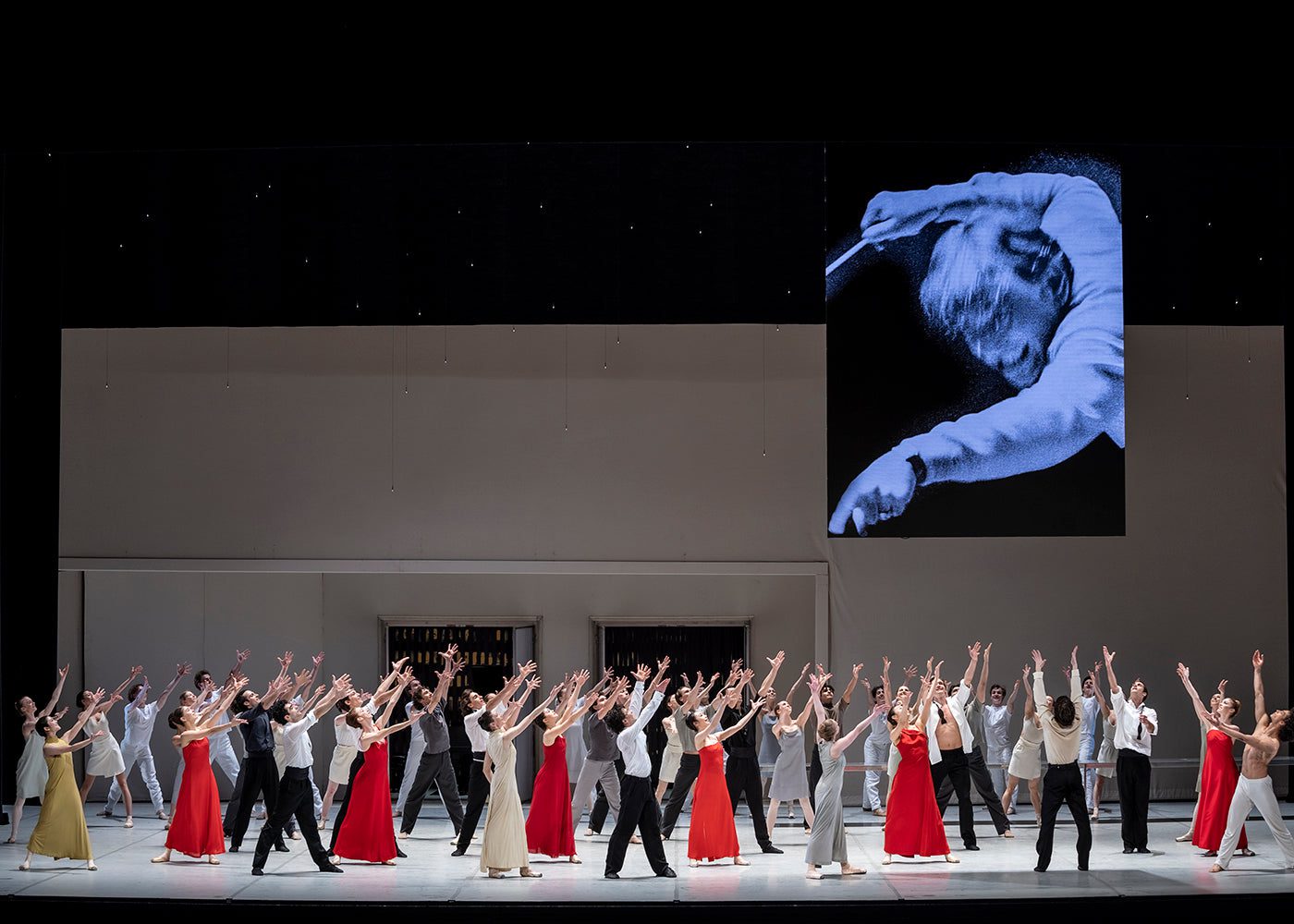 Calling all dance junkies! Seriously, after being deprived of live performances for more than two years—save for the occasional outdoor terpsichorean pleasure—Angelenos were treated to heavy doses of balletic feasting when Hamburg Ballet made its debut at the Music Center this month.

Not only did the troupe, which has been directed by Wisconsin-born, German-based John Neumeier since 1973, perform Bach’s sublime “St. Matthew Passion” in a Los Angeles Opera production that featured 42 dancers onstage during the four hours (solo singers were in the pit alongside the orchestra, led by LAO’s stellar music director James Conlon), but the company also mounted three performances of the West Coast premiere of “Bernstein Dances.”

The Neumeier “Passion” bowed in a church in Hamburg in 1980 and in New York three years later, while “Bernstein Dances” premiered in 1998. As for the former, there is a timeless quality to the opera that, in this case, proved to be primarily a ballet, but with “Dances,” which Neumeier dubbed a “revue” and dedicated to his friend, the late great composer/conductor Leonard Bernstein, the choreography occasionally seemed stale and, well, out of step with the times. (And what times they are, what with Covid literally still in the air and the Russians waging a heinous war on Ukraine.)

Bernstein’s music (Garrett Keast led a stellar LAO orchestra), with its joyous and jazzy rhythms and eminently hummable tunes, does lend itself to dance. But the narrative, which tracks Bernstein’s career from his earliest dance works and Broadway shows up to “Mass,” proved problematic, diving into the composer’s personal, i.e., sexual, life in somewhat of a glib, if heavy-handed and predictable fashion (the Bernstein figure—Christopher Evans in the closing night cast—kissing another man).

With an array of costumes designed by Giorgio Armani, including pristine whites, evening garb for both men and women, with steamy red gowns for some of the gals, as well as form-fitting dance trunks for the dudes and purple bras and suit jackets for the ladies, added to the changing moods of the opus, which was bookended by the lively—and recognizable—overture to Bernstein’s 1956 “Candide.”

Beginning with large projections of the musician conducting, with his dance double first seen slumped over a piano—and David Rodriguez as Bernstein’s guiding angel, “Love,” the work also featured singers CJ Eldred and Dorothea Baumann crooning throughout. Initially warbling, “Who Am I,” from “Peter Pan” (1950), with accompaniment by onstage pianist Sebastian Knauer, the vocalists signaled that the onset of Bernstein’s journey—psychological and otherwise—was, literally, underfoot and underway.

Wasting no time, music from “Facsimile,” Jerome Robbins’s 1946 ballet about an amorous triangle featured the marvelous Emilie Mazoń and an athletic Jacopo Bellussi, as well as Evans and Rodriguez, and soon segued into a pastiche of tunes from “Wonderful Town” (1953). With lyrics by Betty Comden and Adolph Green, including, “Why, oh why, oh, why did I leave Ohio”—the number was fun and quirky, but it strained credulity to imagine Lenny, as he was affectionately called, a country bumpkin.

Nevertheless, we’re now in the glorious burg of New York (Reinhart Wolf’s projections featured, among other images, the Twin Towers—here a mournful reminder of their absence—and the Brooklyn Bridge), with dancing to match: Exuberant shoulder-twitching, helium balloon-like leaps and entrechats were on full display, while Mazoń was a standout, her articulated feet and arched back embodying the fervor and electricity of the Big Apple.

Bernstein’s spiritual side, which was meant to be conveyed in selections from “Mass” (commissioned for the opening of the Kennedy Center in 1971; choreographed by Alvin Ailey), was not as convincing—women in meditative lotus poses, for example. But the close of Part I, dubbed, “Success—A Success Story,” was so beautiful it hurt, the heart aching, as it were, for both the emotional sustenance and relief that art can provide.

The troupe delivered in spades, with “Something’s Coming” and “Symphonic Dances” from “West Side Story” (1957), the perfect musical setting for validating their artistic mettle. Here were Madoka Sugai, Ida Praetorius, Karen Azatyan, Yaiza Coll and others, offering extraordinary one-legged balancing poses, six-o-clock extensions and the deepest of pliés. The men, including Evans, Marc Jubete and Ricardo Urbina, deployed deft lunges, while the iconic finger-snapping motif resonated.

Partnering was divine, though the blatant phallic imagery of the Empire State Building was almost risible. But it was the urgency in both the music and the movement that was particularly potent, leaving one to believe that there truly is, “a place for us, someday a place for us…” from the anthemic, “Somewhere.”

Part II opened with “Fast Forward,” the dancers performing to the overture of “Candide.” Executing lovely unisons and dreamy lifts, the latter featured women held aloft as if they were exquisite hood ornaments, which, for this reviewer, embodied the essential Panglossian idea that, yes, this world is, “the best of all possible worlds,” as the character expressed to his charge, Candide, in Voltaire’s 1759 novel of the same name.

The “Flashback” sequence harkened back to “Wonderful Town,” with “The Story of My Life” the soundtrack to a night of partying. The very, very long table (shades of the dictator Putin, unfortunately, came to mind, no matter that Rodriguez was perched atop it and moving stealthily), added to the atmosphere intended to symbolize Bernstein’s struggle with his sexual identity. Flowing into the last sequence, “In the Evening…and Through the Night,” the men, oozing a Fred Astairish quality, with the ladies equally glamorous, slinked about to the backdrop of Bernstein’s complete, “Serenade After Plato’s Symposium.”

The throbbing score for solo violin—a fabulous Tai Murray—string orchestra, harp and percussion, was enticing, with the number intercut by Knauer’s solo keyboard playing (“Five Anniversaries” for piano). Neumeier, who was also responsible for the stage design and lighting concept, filled this section’s dance vocabulary with couples doing some fine tango-esque moves, the occasional Nijinksy-like jeté (intimations of Jerome Robbins’ “Faune,” also came to mine) and male-male duets.

But at two and a half hours, “Bernstein Dances,” is a tad long and doesn’t get to the crux of the composer’s life in a veritable dance drama, one that fully distills his character, the musical highs and the troupe’s technical prowess notwithstanding. When Lenny’s picture descended, however, it was only fitting that the performers hail the American genius who gave the world so much, before launching into a series of intoxicating curtain calls to the always effervescent “Candide” overture.