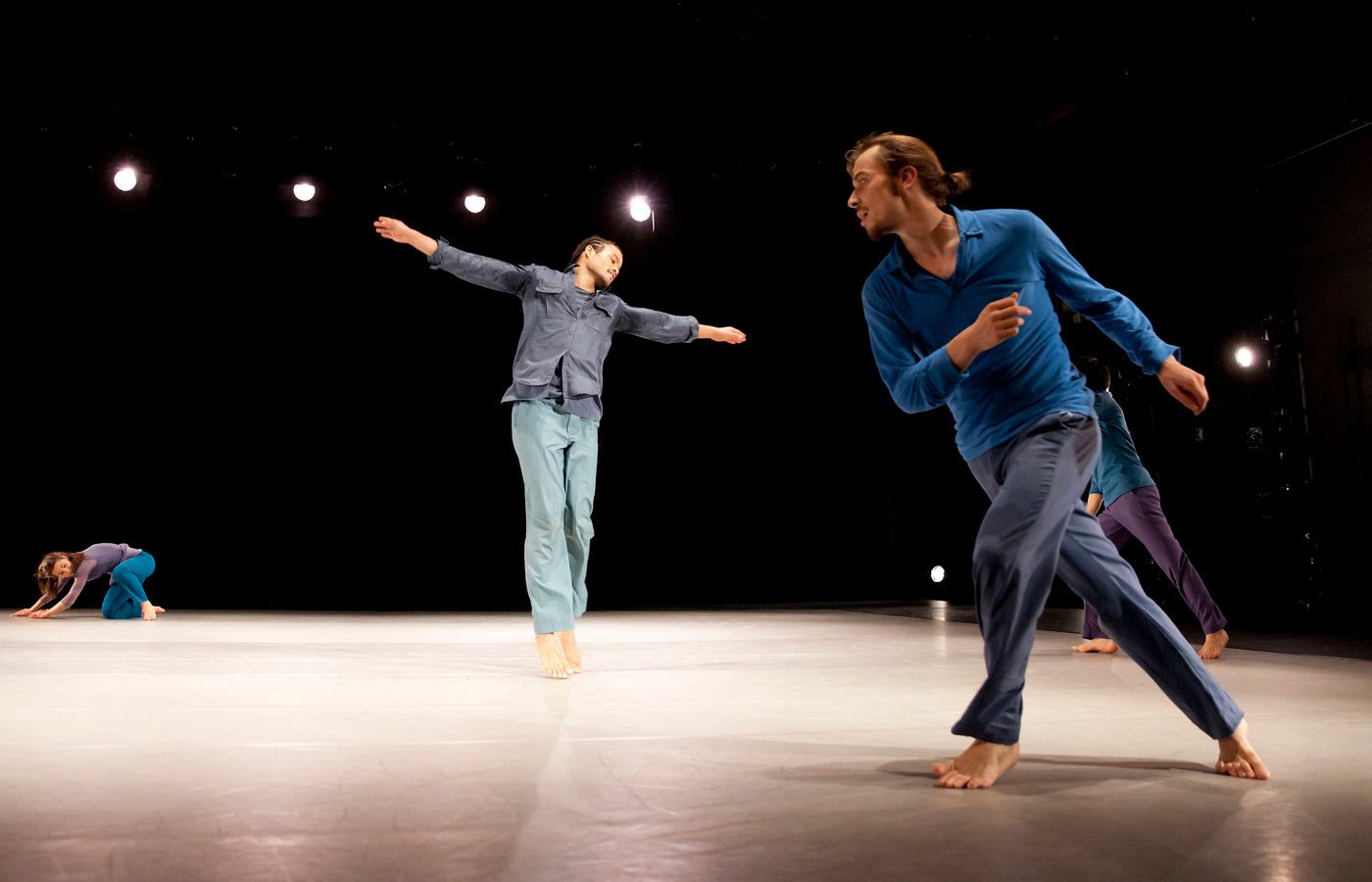 Hagit Yakira performing “…in the middle with you.” Photograph by Rachel Cherry
Sara Veale·
Reviews
·1

Hagit Yakira's “…in the middle with you”

“It’s human to feel vulnerable; it’s honest to feel lonely. I don’t see these emotions as negative so much as critical and introspective.” So responded Hagit Yakira when, during an audience discussion following the performance of her 2013 work “…in the middle with you” last week, a viewer enquired about the distress the piece’s characters face as they grapple with that thorniest of existential concerns, the human condition. Yakira’s answer explains the meditative, rather than brooding, tone that prevails in this dance theatre work, which examines how we transition emotionally from suffering to release. The work is at once abstract and intimate, its self-reflections portrayed by individuals but cast in a universal light.

At the crux of the work is a rumination on the strength of the group versus that of the individual. The dancers begin as strangers, walking briskly past one another and focusing only on their own concerns. “If one keeps walking, everything will be all right,” Takeshi Matsumoto declares confidently. Eventually they begin to react to their conflicts in similar ways: they lie on their sides and pedal their feet, going nowhere; they roll around on their backs, unable to shift position. The group cautiously begins interacting, but a united front still remains out of reach. Instead, they scramble to push past each other at the first opportunity, an every-man-for-himself mentality encapsulated brilliantly in a game of ‘hot lava’ (in which touching the floor is forbidden): disrobing, the performers use their socks and tops as ‘safe zones’, jumping frantically from one to another and shouting out when someone missteps or cheats. The scene is offbeat but not humourless; in fact, it’s delightfully light-hearted and makes great use of the troupe’s flair for improv.

It’s not until one dancer starts to struggle severely that a sense of cooperation takes shape. Sophie Arstall (a Laban grad, like several of the others in the company and Yakira herself) kicks off a free-wheeling flurry of spins and bounds, shouting in French, her panic escalating as she darts around the stage. The others come together, and soon she’s clambering across their hands, backs and shoulders, quite literally supported by her peers. The phrase culminates in all five dancers giggling hysterically for several minutes. Again their antics are showy but not pretentious: unable to resist their rollicking waves of laughter, the audience quickly joins in.

From here it’s a group effort all the way. In one of the work’s best sequences, the dancers crawl downstage on their stomachs, propelling themselves towards a luminous pool of light like creatures slithering into the tide. Coupled with heartening music and a sea foam colour scheme—grays, greens, blues—it’s stirring imagery. A coda of tender lifts and capricious spins concludes the piece, the dancers one by one darting into each other’s arms like kids taking turns on the playground swings. “Me! Me! I fly! I fall!” It’s the strongest display of cohesion yet, the cast’s chemistry readily on display.

During the post-show discussion a few audience members enquired into Yakira’s deconstructive approach to choreography, in which she latches onto a simple pattern of steps for several minutes at a time, repeating the movement while inverting various properties like direction and speed. “It takes a certain patience and curiosity to appreciate this kind of repetition and find something new in it,” she answers. “I’m drawn especially to walking, which you can stretch out in lots of ways. I personally find walking very meditative—it’s a clean, quiet place to be with my emotions in peace, and the piece reflects that.” Indeed, one of the first lines spoken in the work comes during a prolonged sequence of pacing: “Above all don’t lose your desire to walk. I’ve walked myself into my best thoughts.”

“in the middle with you…” is an inward-looking work to be sure, but its self-reflections aren’t isolating; rather they invite us to examine our own experiences of the emotions thrown up (fear, longing, panic, peace). The format is esoteric but the mood is warm—a winning combination in this instance.

Next
The Boy Should Always Meet the Girl