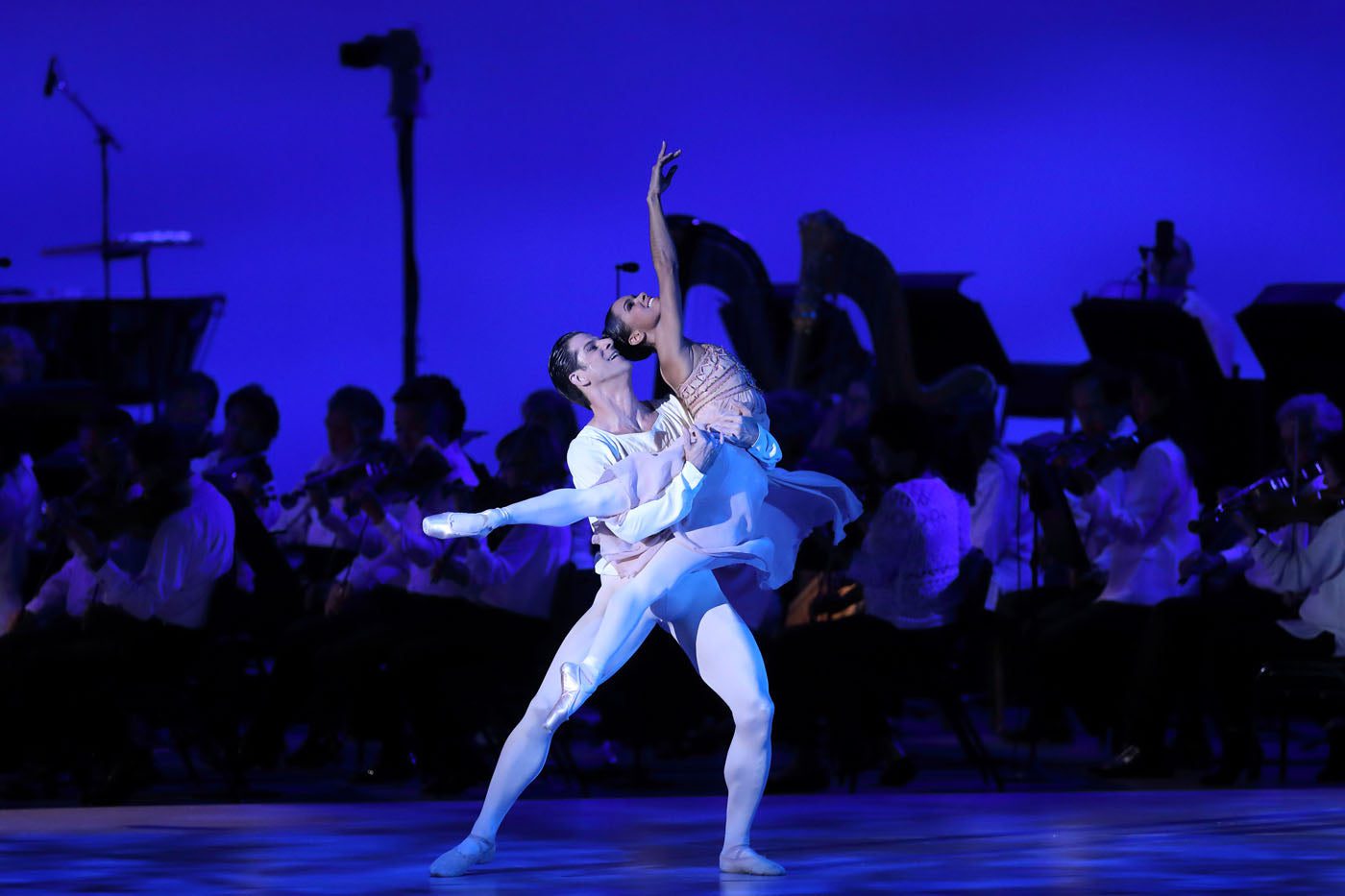 Marcelo Gomes and Misty Copeland perform an excerpt from “Romeo and Juliet” for Dudamel and Stars of Ballet at the Hollywood Bowl. Photograph by Craig T. Mathew/Mathew Imaging
Victoria Looseleaf·
Reviews
·0

Celebrating the opening of its 96th season at the iconic Hollywood Bowl, the Los Angeles Philharmonic, under the baton of the esteemed Gustavo Dudamel—his eighth season as the orchestra’s music and artistic director—offered an uneven program of ballet and music, some thrilling, some head-scratching, all begging for more, however.

Having once been married to classically trained dancer, Eloísa Maturén, the Dude, as the Venezuelan-born conductor is fondly called, is a dance aficionado, and bringing in four bona fide ballet stars—Marcelo Gomes, Misty Copeland, Natalia Osipova and Sergei Polunin—promised to be an enchanting evening in the bucolic Cahuenga Pass.

After all, the Bowl has a storied history, with artists of all stripes, from Fred Astaire, Mikhail Baryshnikov and Martha Graham and her company, to Judy Garland, Luciano Pavarotti and the Beatles having graced the stage over the years. Beginning with selections from Tchaikovsky’s “The Sleeping Beauty,” Dudamel seemed, of all things, tentative. Assaying choice musical morsels—“The Lilac Fairy,” “Panorama” and “Valse,” the lush and evocative themes familiar, for sure—Dudamel and his signature buoyancy were not in evidence.

The Tchaikovsky mini-retrospective continued, with a pair of selections from “Swan Lake” filling the canyon (the amplification system at the Bowl has dramatically improved over the decades, as have, in general, the HD video projections), with Gomes’ arrival as the White Swan from Matthew Bourne’s “Swan Lake” signaling a bounty of theatrics.

If only! Dancing Bourne’s choreography from the Briton’s most famous work, Gomes had the attitude, chest (bare, but not waxed) and signature black beak make-up, his Lez Brotherston-designed feathery culottes no longer shocking—and not molting, either, as Gomes’ solo lasted about five minutes. It was, in fact, akin to Cygnus Interruptus, his plumed ferocity and stealthy leaps notwithstanding.

And then the Brazilian principal from American Ballet Theatre was gone—pouf—ceding the stage to Copeland, also with ABT, who entered in standard White Swan garb to the hoots and hollers of the huge crowd. Cell phones lit up the amphitheater like so many marauding fireflies, capturing Copeland’s six o’clock extensions, the video screens displaying close-ups of her in full grace-and-grandeur mode.

The dancer’s arms had the requisite flutter, her footwork equally articulated, but she, too, disappeared before deploying even half the choreography that was credited in the program to Lev Ivanov, Kevin McKenzie and Marius Petipa, choreography that one longs to see in a wistful, innocent Princess Odette that Copeland owned—or at least rented—here by dint of its brevity.

Dudamel, a huge smile on his face, did blow a kiss to the ballerina as she returned to the stage for her bows, but these truncated and juxtaposed solos induced a kind of whiplash effect for this viewer, the most stunning aspect that, at 8:35, it was already time for intermission, the sun not having completely set.

After a longish intermission (30 minutes), the Dude returned to the podium, easily sailing through several selections from “Giselle,” composed by Adolphe Adam (his Christmas Carol, “Minuit, chrétiens,” perhaps better known, was later set to different English lyrics as “O Holy Night”). In any case, “Giselle,” the Romantic gold standard of any traditional ballet company, features the heroine falling for the wrong man, going insane, dying and then being reborn as a Wili, a vampire-like creature that takes revenge on her fraudulent beau, only to let him live in the end. (Men: You can’t live with ‘em, you can’t let ‘em die.)

That said of the work that premiered in Paris in 1841, it was Osipova and Polunin, the hot terpsichorean couple of the moment—both on and offstage—who temporarily assumed the roles of Giselle and Albrecht in the Act II Grand Pas and Variations, choreographed by Petipa after Jean Coralli and Jules Perrot.

Polunin, at 27 and the erstwhile bad boy of ballet, may be best known for his tattoos, temperament and, yes, sizzling moves in David LaChapelle’s “Take Me to Church” video, the viral sensation set to Hozier’s song of the same name. And now the Ukranian, who at 19 was the youngest principal at the Royal Ballet before he quit at 21, is also on the cusp of an acting career, with a number of movie roles coming up, including his on-screen debut in Kenneth Branagh’s Murder on the Orient Express, to be released in November.

It’s unfortunate, then, that his brief stint partnering Osipova at the Bowl, although sumptuous and shot through with undeniable chemistry, vacillated between perfection and being perfunctory. On the other hand, the ballerino tossed off a series of electrifying, hummingbird-like entrechats in his variations, his buttery landings also superb. But it felt, at times, as if he wished to shed his noble threads and get back to the, well, church of a more modern movement vocabulary.

Not quite so with Osipova, a brilliant classicist currently with the Royal Ballet, and, at 31, a sensation in her own right. At the top of her game, with rock solid balances and assured jumps, Osipova has a remarkably pliant, liquid-like body that seemed to melt into Polunin’s. There were no tricks here, no bells, no whistles, but, there was, instead, sheer, unadulterated beauty, her bourrées a revelation, her otherworldliness the embodiment of Giselle in all her vulnerable glory.

Dudamel’s sensitive conducting, even with his back to the artists, reflected the mood, which, alas, ended all too soon. Thankfully, the maestro launched into another interpretation of doomed love: Prokofiev’s powerful “Romeo and Juliet” score provided heft, rhythmic propulsion and lots of brass, which the maestro mined with fervor, a chorus of Bowl crickets seemingly accentuating the enormity of the tragedy in these orchestral excerpts.

Together at last, Gomes and Copeland, performing the Balcony Scene, were sweethearts plucked from the stars, delighting in each other’s company, from glances and ardent embraces to a lingering kiss. Sure-footed, Gomes handily executed a number of breathtaking lifts, as if Copeland were precious cargo, which, of course, she is. Theirs was a dance of daring, of utter engagement, something not easily accomplished in a venue that seats nearly 18,000.

While love may not have triumphed (except in the afterlife), the bravissima world of ballet did, prompting the Dude to perform an encore—the overture to Tchaikovsky’s winter chestnut, “The Nutcracker”—making the evening feel like a veritable Christmas in July!

Next
Through Tatiana’s Eyes