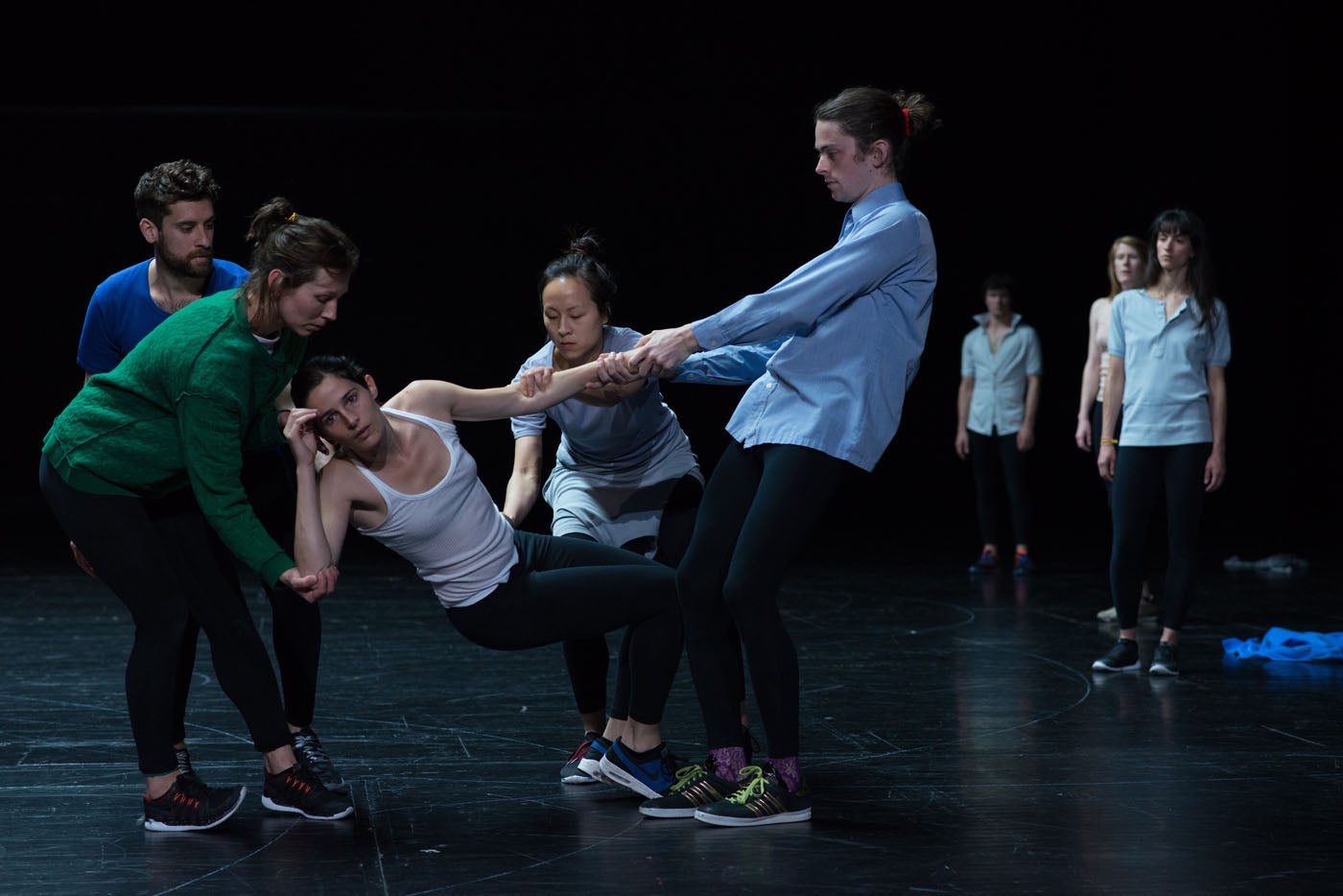 Anne Teresa De Keersmaeker's take on Shakespeare's As You Like It

Anne Teresa De Keersmaeker’s take on Shakespeare’s As You Like It opens on a bare stage. Brian Eno’s “Golden Hours” plays on loop, her interpretation of Shakespeare’s comedy a meeting between the play and Eno’s album Another Green World. The track finishes one cycle without anything happening. When the cast do enter they edge forward, their slow walk barely moving. By the third loop phrases from the song begin to catch the attention, ‘how can moments go so slow?’

The company remain on stage for the majority of the performance melting in and out of a group from which the characters emerge to play their scenes. The opening is the only act not set in the mythical Forest of Arden, but in Duke Frederick’s court. Here the group have an almost ghostly presence, threatening and watchful as they slowly advance and retreat in a continuation of their slow paced walks. As the story slips into Act 2 the company begin to orbit one another, circling on ever revolving pathways as snippets of the story unfold in between them. The change creates a more relaxed and tangible connection between the dancers, a reflection, perhaps, of the freedom of the forest world where Rosalind and her cousin have been sent—‘in content / To liberty, and not to banishment.’

This ever revolving quality continues through the piece, with pathways of movement that swirl and criss-cross the stage. The story too reflects this—each dancer has their turn, the characters seemingly interchangeable, although Rosalind (played by male dancer Aron Blom) and Orlando (Tarek Halaby) remain in their roles, offering a strand of clarity through this somewhat confusing storyline.

The movement, often performed in silence, develops around quotes from the play projected onto the bare, black wall upstage. The natural, fluid style of the choreography feels conversational, as if the dancers are responding to one another but it remains too abstract to unfold the story alone. We might glean hints of meaning, a sense of relationships, but it’s only through the scenario set by the phrases that we can attempt to follow the narrative.

The long periods of silence at times become difficult to endure, especially as de Keersmaeker’s naturalistic movement, a style unique to each dancer but outwardly of the same mould, offers little in way of dynamic variation. When music does cut in—a harmonised song, a tune picked out on a guitar—it feels like a relief. The energy lifts, then, as silence returns, settles once again to its steady onward pace. The general feel of “Golden Hours” is much like this. It flows along in gentle waves.

Occasionally dancers run off the stage, dashing upstairs, escaping into the aisles, or wrestled unceremoniously over its edge. Such moments grab the attention but they are few and far between. The playful movement of Act 3, where Orlando leaves poems around the forest for Rosalind, marks a shift in energy and offers something for anyone with a wavering concentration to cling to. The dancers flit around the stage enacting out the harts and the hinds of Orlando’s poorly rhymed poetry, a comical interlude in keeping with Shakespeare’s lighthearted humour.

There are some entertainingly quirky oddities too. Orlando and Rosalind share a kiss over a cigarette, little puffs of smoke floating between them; a couple’s shoelaces are tied together as they sing a duet, a comical reflection of their words. Some of these moments seem to add to the artistic effect more than the story—at one point Orlando marks chalk patterns across the floor as he follows a dancer’s movements—but they at least provide some visual variation as the work moves steadfastly on.

Often the actual story escapes you but the feeling that you are watching a dialogue between characters, as much as you do in a play, remains. At times it’s an endurance test, slow and tiresome, but there’s also a beauty in De Keersmaeker’s patterns and the evident thought that exists behind each movement; the sense that the company’s actions are building a scene in the absence of words. The piece could certainly have benefited from being tightened into a shorter time frame but, eventually, you grow accustomed to the way “Golden Hours” speaks, even if you can’t always translate it. Love or hate it, De Keersmaeker’s take on As You Like It may be a play without words but it’s not without language.

Previous
The Road to Golgota

Next
Fagan on Fire