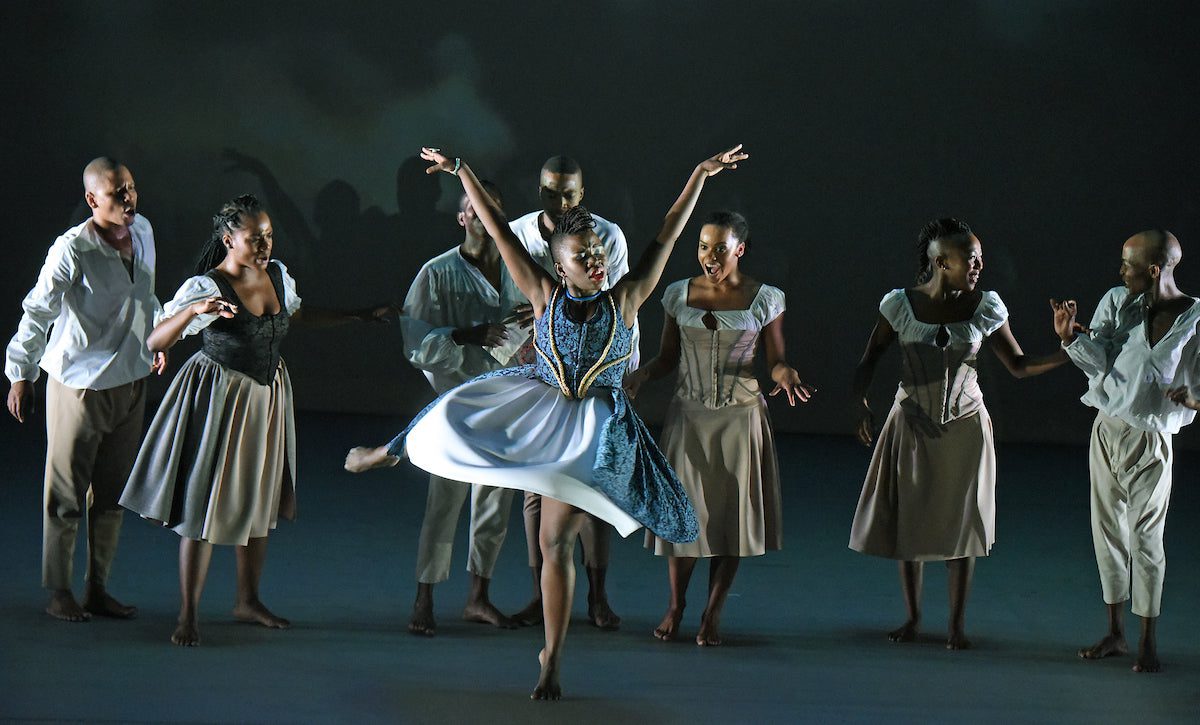 Men. You can’t live with ’em and you can’t let ’em die. At least that’s the thinking in “Giselle,” the Romantic gold standard of any traditional ballet company in which the heroine falls for the wrong man, goes insane, perishes and is reborn as a Wili, a vampire-like creature that takes revenge on her fraudulent beau, only to let him live in the end.

Fast forward to the version danced and choreographed by South African Dada Masilo, and the work is not only turned on its head—Masilo is bald, beautiful and, well, ballsy—but is also reimagined as an über-feminist revenge story. No wilting flower she in this garden of tweaked and articulated movement vocabulary: Combining classical ballet (lots of luscious arabesques, extensions and leaps), with contemporary dance and traditional African forms—particularly the rhythmic dances of Tswana—Masilo could hardly have known that the Harvey Weinsteins of the world would be called out for their systemic misogyny, harassment and inexorable behavior, making this production prescient and, well, a tad spooky.

Ah, but spooky has always been part of the “Giselle” tale, with those wily Wilis nothing less than cult members inhabiting the supernatural world, wreaking havoc and death on the dudes who wronged them. In Masilo’s telling, which premiered in 2017, the Wilis are both male and female spirits, with the Act II scenario a terpsichorean crescendo of frenzied bodies writhing, twisting and wrist-wiggling through space, their intricate footwork a marvel to behold.

And let us note that these dozen dancers also prattle, hoot and howl in several languages, including English, with Xola Willie’s moaning-as-he-expires Albrecht making Marion Crane’s death scene from Hitchcock’s Psycho seem, er, truncated, and Giselle commanding Tshepo Zasekhaya’s Hilarion (the villager who loves her), to “Leave me alone!”

The fusion-like composition (heard on tape), by fellow South African Philip Miller, also features vocalists, as well as several memorable motifs from Adolphe Adam’s original score. Indeed, the exotic intensity Miller mines with strings, brass and percussion (occasionally veering between a Second Line parade and the theme from Jaws), reverberates in the ‘mad’ scene and throughout Act II, where the music accompanying the entrance of the Wilis is magnificently crafted and continues unabated with a throbbing, visceral pulse.

William Kentridge, another South African and frequent Masilo collaborator, provides projections at the back of the stage—a swampy, bucolic scene at the work’s beginning—when the barefoot dancers are stereotypically abused farm workers under the thumb of a nasty foreman, and Giselle’s mother (Khaya Ndlovu), no kindly matriarch, offers a bit of comic relief, cackling as she bids her daughter, “Get back to work.”

After the purple-robed nobles appear (Act I costumes by David Hutt), Liyabuya Gongo’s Bathilde joins the peasants in a bawdy dance featuring sturdy kicks and stylized backbends. Unable to resist Albrecht —and not knowing he’s betrothed to Bathilde—Giselle, not really the shy, retiring type of yore, must nevertheless go from besotted gal to one betrayed, from human being to spectral presence, enhanced by Suzette le Sueur’s dramatic lighting.

But that’s not all: Before donning the Wilis’ blood red tutu/gown of Act II (designed by Songezo Mcilizeli and Nonofo Olekeng), our heroine is slut and body shamed: Shunned and stripped of her clothing, Giselle shrieks in agony, and, covering her breasts, quakes and quivers before finally crumbling to the ground like so much leftover boerewors, that South African sausage-based staple.

Needless to say, this Giselle does not “go gentle into that good night,” with her totentanz powerful, provocative and poignant, and, in the process, banishing from memory any bun-sporting Giselle whose encroaching insanity is signaled by letting her hair down. (Masilo has called this her reaction “against the prettiness of Romantic-era ballets.”)

And talk about mean girls—or not—Masilo has cast a man, the towering, albeit androgynous Llewellyn Mnguni as Myrtha, the Queen of the Wilis, which the program notes call a Sangoma, or traditional South African healer. Brandishing a flyswatter-like whip, this Myrtha commands his Wilis well, giving them a streak of viciousness in their quest to make men accountable and bringing them to heel, so to speak, all the while executing muscular, march-like rapid unisons. The familiar crossed arms of a traditional “Giselle” are on view, but here they are raised high and behind their heads in sheer defiance (think elevated fist bumps).

Yes, these wraiths are feral and formidable, giving added oomph to the old-guard Gisellean ending: Our gal, herself wielding a switch in the finale, first gives Albrecht a tender kiss…before going in for the graphic kill. Like a Raymond Chandler cold-hearted femme fatale, this dancing dame beats her heart-stealing guy to death, each blow resonating throughout the theater with the collective fury of deceived women everywhere.

Masilo, who was born in in Johannesburg in 1986 and has been deconstructing classical ballets since her 2008 production of “Romeo and Juliet” (followed by “Carmen” in 2009 and “Swan Lake” in 2010), continues to tackle the notions of genealogy, class and traditional social norms, all the while peering through the prism of European ballet, with her next dance, “The Rite of Spring.” Still, Masilo gets to the heart of these formality-deprived stories, that of unrequited love. And though revenge may be a dish best served cold, in Masilo’s “Giselle,” it is also served with bold imagination, flair and brutal realities. Hers is a #MeToo and #TimesUp aesthetic—on steroids.

Previous
Forsythe at the Ready

Next
Music of the Ballet