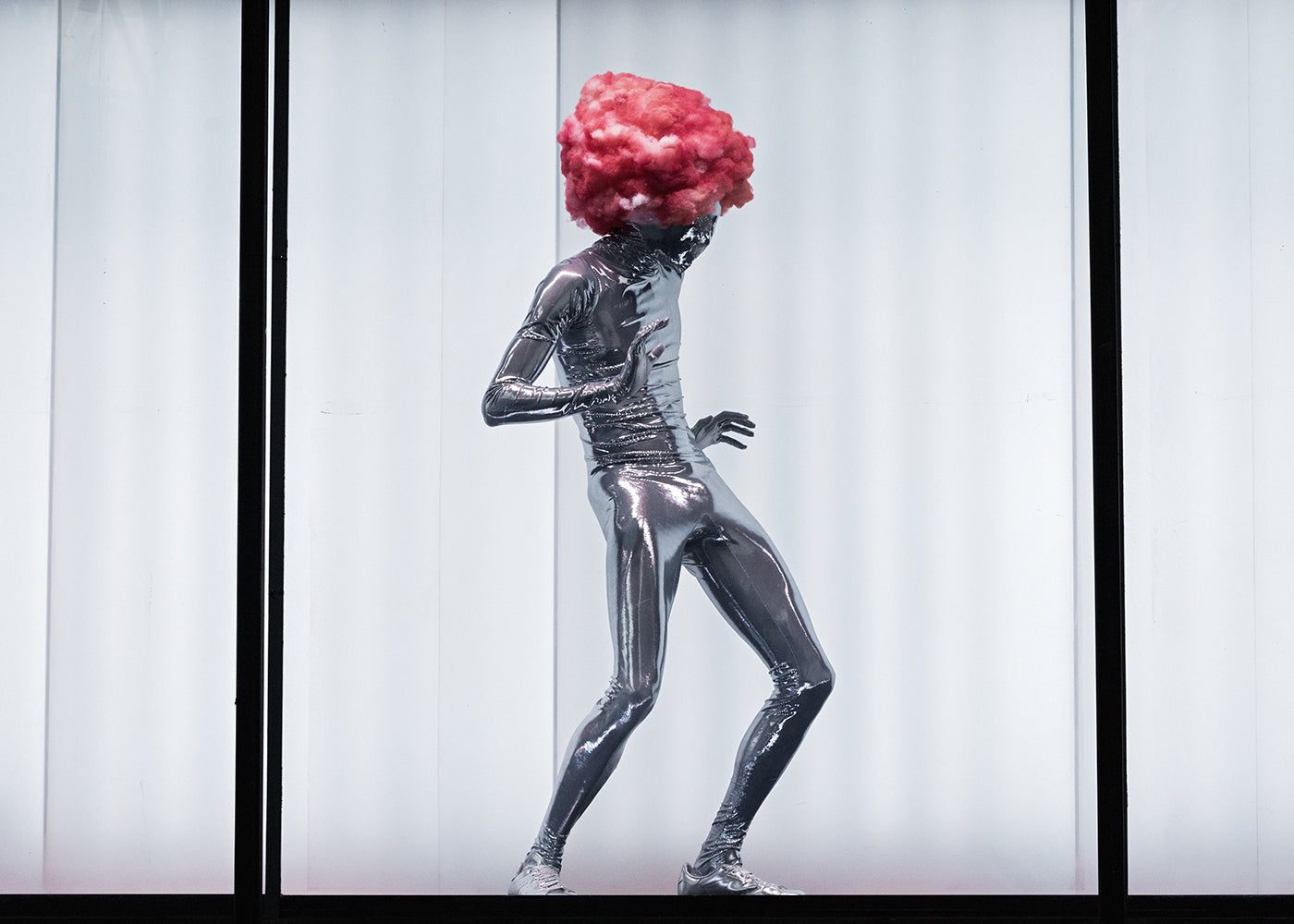 What makes German choreographer/performer Frauke Requardt’s work so special is that she never uses spectacle for its own sake—there are always enough ideas to accompany her own vivid, inventive choreography, which scratches both itches of live art and contemporary dance at once.

A 40-foot haulage truck lands in London’s docks. Mysterious figures in silver morphsuits glide on travelators, seemingly stuck on an interminable loop and creating a hypnotic, almost soporific effect. Where are they headed? Where will they end up?

Binaural FX tickle in ears; headphones are encouraged, in order to experience an almost ASMR effect. There are sound samples of UFOs and general Cold War era panic, which only adds to the sense of retro-futurism. And still, seemingly oblivious to the madness unfolding, the figures glide, and glide, and glide, with the grace of ice skaters.

Until . . . something snaps within one of the figures, and “it” looks back at the others. One walks in another direction, and another picks up a groove, and busts out into a jazz routine to brassy music, then another follows. Ben and Max Ringham and Jack Baker’s sound design and music is a huge element here, both pretty and creepy lts reminiscent of the famous clip of Kraftwerk in the seventies, when the robotic band (who used to send replicas of themselves to interviews) bust out in a strange, knock-kneed, stiff groove to one of their tunes, arms flailing out of time. The genie is out of the bottle; the machines are becoming sentient.

With a full ensemble, it’s hard to tell who is who, as faces and bodies remain obscured. Brightly coloured wigs are donned and plants are brought onto the floor, the natural and artificial together. Symbols of ’50s Americana follow: hot dogs are eaten, baseball caps worn and bowling balls hurled. The dancers are no longer regimented, not mere automatons. In going against the tread of the travelator, we go against the natural order of things, refusing to be passive consumers, or conveyor belt commodities. It seems that Requardt and Rosenberg are warning us that we are living lives hermetically sealed, starting to become alien to one another, and that if we can no longer look up from our screens and face each other, we will no longer be able to communicate. Okay, it’s not the most groundbreaking idea, but it’s beautifully rendered.

There’s a glitch. Things flicker.One figure finally escapes, but moving in treacly slow-motion, they seem stuck. And now, dances seem to burst out from nowhere, suggestive of dance as pure instinct, primordial. This is reinforced by the sound effects of tropical birds and rainforests. The dance is getting bolder, more balletic, or jazz-influenced, a la Audrey Horne’s trance-like solo in an early episode of Twin Peaks. This solo is performed by a dancer wearing a large red bouffant. She looks like a bizarre alien lollipop.

As gorgeously eccentric as this film (and the work itself) is though, it feels frustrating watching on a screen at home, a curiously detached sensation. There are not a lot of close-ups on the dance content. A live setting would better suit a piece as ambitious as this, because, as with so much on-demand work out there, it only reinstates the need to interact with the work as an audience member, to feel part of something: a huge irony given the theme being presented, of alienation and consumption. I feel like Thomas Jerome, David Bowie’s character in The Man Who Fell to Earth, an alien attempting to make sense of the world by watching many television sets at once, but feeling numb. Those who will see this live are incredibly lucky.

Beep beep-boop, over and out.

Next
Anatomy Of Dance