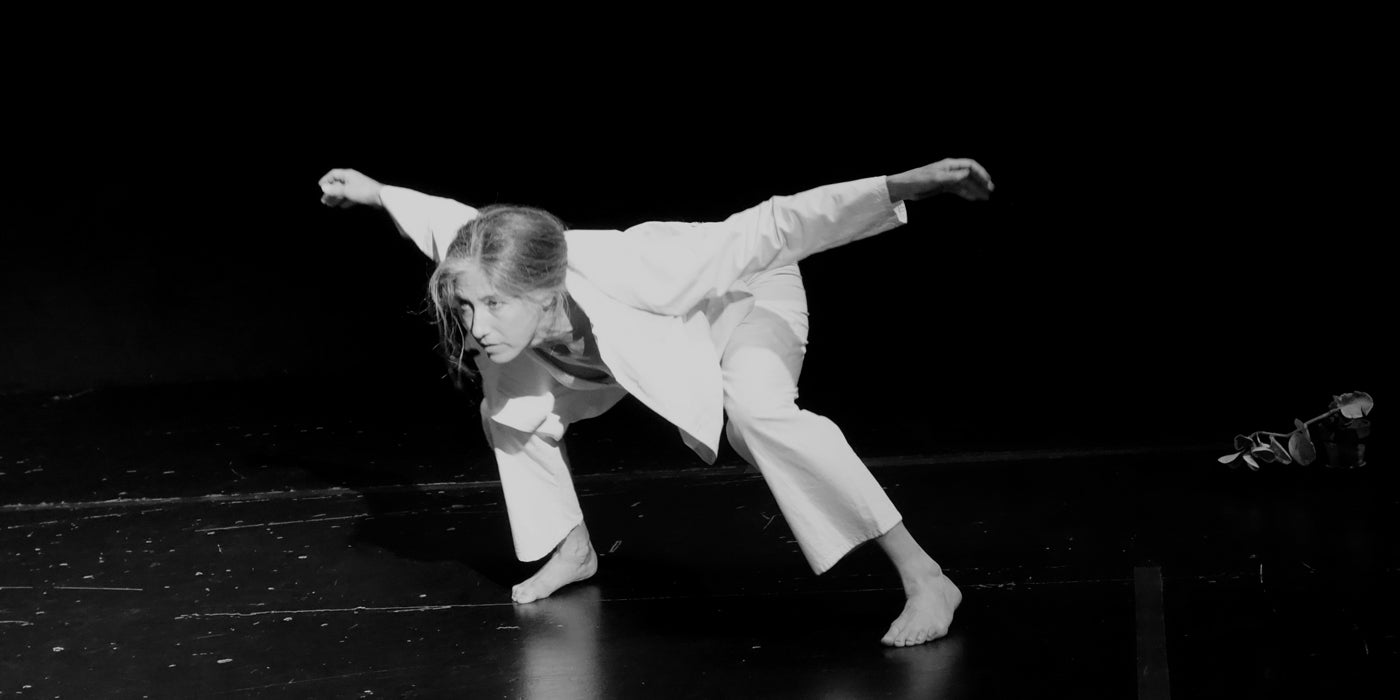 Flower of the Season

In an astonishing display of courage, fortitude and wit, three dancers performed solos and with each other to a packed house in “Flower of the Season,” a series now in its 12th year presented by Body Weather Laboratory. B.W.L., a forum for investigating kinesthetic and movement research that was initiated by dancer/farmer and improvisateur, Min Tanaka, and is offered by exponents worldwide, is led in Venice by Oguri, the Japan-born performer who goes by one name only.

The program, inspired by Ikebana, the Japanese art of flower arranging, may not have been flora-heavy, but it certainly lived up to its press release notes: “In a meeting of spirits, earthly and divine, the flower responds to the vessel. It is an act of love, of romance. Without hesitation, like the action of throwing something somewhere, the arrangement is revealed not imposed.”

And so it was. Oguri, who trained with the late Butoh founder Tatsumi Hijikata, as well as having studied and danced with Tanaka, has been living and performing in Los Angeles since 1990. A master of slow, stylized movement, the slightly built artist who brings laser-like intensity to even the smallest gesture, opened the performance sporting a baseball cap and blue and white workout wear.

“I found a white hairy ape in the forest from the Milky Way,” he intoned softly, in heavily accented English, as he ventured onto the floor of the black-box theater.

Arms swooping, his body tilting, relaxed yet controlled, Oguri was Petrouchka unstrung. Whether on his knees or on the balls of his highly arched feet, the dancer made ritual out of every stirring. Wriggling his toes as he lay prone on his back, he also crawled in a primeval fashion, exploring and circling the lone plant that served as “décor.”

Assuming a batter’s stance at one point, Oguri also assayed a number of yoga-like poses, from warrior posture to triangle. When hugging the wall, he deployed his signature über-backbend, his fingers splayed, this impish presence giving bits of jubilant meaning to the abstract.

Oh, yes: The dance unfolded to a silent score (Cage would have been proud), where every cough, rustle of paper or shifting about in one’s seat provided the only accompaniment to this post-apocalyptic, barren terrain/dancescape, the forsaken plant lying limply in its small pot, ultimately making the movement vocabulary powerful to behold.

While pondering his (our) fate(s), Oguri gently touched his chin, his musings near trance-inducing, when Simone Forti, who began dancing in 1955 with Anna Halprin and has been featured in venues including New York’s Museum of Modern Art, entered the stage/playing field.

Her red shirt added color to the scene, her loose gray pants a match with her own shock of wild gray hair. When Forti lay down near the plant, extending an arm towards the vegetation, Oguri slunk from the stage.

Monumental in her simplicity, Forti, whose “News Animations”—dances that spontaneously weave movement and spoken words with a focus on world events—delighted in the sounds of her own feet moving across the Marley floor.

“Is that North?” she asked, dipping and whooshing through the space like a child in airplane mode. Forti, one moment on all fours, the next cooing, yipping and jumping excitedly in the air, drew laughs from the audience, communal laughs that contributed to the sonicless soundtrack—an aural blankness that, astounding in its emptiness, propelled the work to another level.

Waiting for a score that never arrived (hello, Beckett!), one marveled at Forti’s stillness which then morphed into Charlie Chaplin “Great Dictator” gambits, bouncing an unseen balloon, as Oguri re-entered, sans cap, his normally shaved head sporting hair, beholding Forti, his mouth agape: Now apes, simians at play and discovering bones/weapons as if from Kubrick’s 2001: A Space Odyssey, the duo huddled on the floor. Springing upwards, Forti made animal sounds while Oguri rose, balancing on one leg, a pillar of unbending, enduring strength.

Their fingers touched, they caressed, they plied deeply—royally—their arms stretching outwards, before Forti mystically wended her way onto Oguri’s body, her legs wrapped around his torso. Precious cargo—Forti and Oguri: She waved regally, gesturing, as well, to that forlorn plant, before he let down this unstoppable sprite/deep thinker ever so gently.

The pair stood and bowed slightly before walking offstage, ceding the floor to Roxanne Steinberg. Oguri’s partner who has also worked with a number of important artists, including Tanaka and Sankai Juku’s Amagatsu Ushio, Steinberg is a compelling performer in her own right.

Clad in white cotton drawstring pants, jacket and tank top, her long graying braid reminiscent of a Chinese queue, she stood facing front, trying to make a sound, any sound, as if to compensate for the ambient void that coursed through the theater.

Gurgling, crying, laughing, these primal utterances revealed Steinberg’s daring, her determination to communicate, as if for the first time. She bent her knees, her command of the body revealing itself further in what became a startling duet with the wall.

Forti, who fittingly received a 2011 Yoko Ono Lennon Award for Courage in the Arts, then joined Steinberg, their heads touching, then cheeks. Steinberg toyed with Forti’s hair as the octogenarian began mouthing a series of vowels, as if this, indeed, were the beginning of the universe, a universe of ancient ideas made visible through the physical form.

Swaying, Steinberg could have been listening to her own private Strauss waltz as we witnessed a love made palpable. The pair also offered some neo-tango moves, with Steinberg guiding/maneuvering this metaphorical ship of life through unchartered, but comforting waters.

Oguri returned, whirly-birding, as the trio looked up, their unison arms beckoning: American Gothic, plus one. They each begin whistling through cupped hands, as if trying to summon the Gods over a virtual campfire. Or was this a tootle signaling an end-of-work shift, a dog call, a warning, a train whistle?

It was, in essence, nothing less than a fugue of life, including howls and baying at an invisible moon. Soon, the audience was whistling, too, ecstatic at having this cacophony of sounds, grateful to have had three graces leading us on an extraordinary, emotion-filled journey, one not soon to be forgotten.