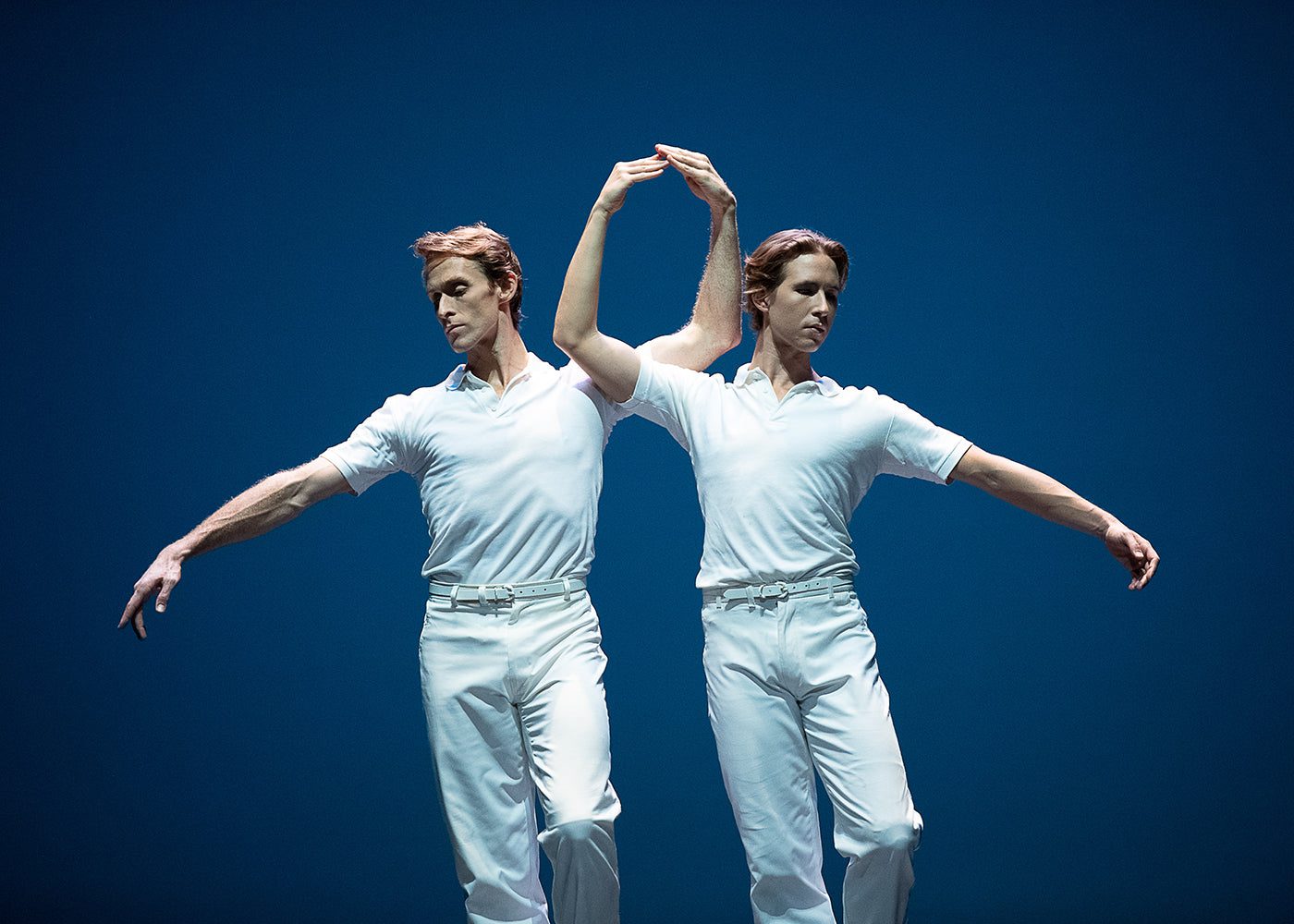 The second and final 2020 Fall for Dance program was not as somber as the first, though it still felt far removed from the ebullient live festivals of years past. Again, four pieces and seven dancers comprised the evening. Once again David Hallberg and Alicia Graf Mack co-hosted the event. And yet again there were two world premiere commissions and two classics on the bill. But this time around I tallied the scorecard at three hits and one miss.

The misfire was the opener: the three female solos from George Balanchine’s “Who Cares?” performed by the New York City Ballet. This jazzy lark fell totally flat. Perhaps it was the canned music, the excerption, or the lack of an audience. It didn’t help that their costumes seemed to come from three different ballets. And since they were using recorded music, the dancers should have at least picked tapings in the tempi they liked. Ashley Bouder seemed to want to be doing her solo at twice the speed. Despite the many difficult turns in her variation, Brittany Pollack maintained a nice relaxed smile—maybe too relaxed. Even in the up-close filming I couldn’t tell if she was attempting to do a diagonal of attitudes on a straight or a bent leg. Tiler Peck’s incarnation of the “Fascinatin’ Rhythm” solo is one of the seven wonders of the dance world, and she was the highlight here. She builds suspense with every detail, like in her over-the-music acceleration of piqué turns connecting two manèges. But if you ever get a chance to see her do it live don’t miss it, it’s even better.

I thought perhaps the digital broadcast format just didn’t lend itself well to a nightclub feel, but Dormeshia’s commissioned closer “Lady Swings the Blues” proved otherwise. Dormeshia (who matched her gold-sequined top to her shiny tap shoes) and her backing band were convincingly swinging. She is as much a musician as she is a dancer, and she performed alongside her frequent collaborators Noah Garabedian, Winard Harper, and Gabriel Roxbury—with whom she also wrote the score.

Dormeshia and her band members watched each other closely, for timing cues and to relish in each other’s rhythmic feats. They appeared to perform for each other; the effect was conspiratorial rather than presentational. When Dormeshia’s spotlight was turned off for a band-only interlude, you could still see that she was clapping and swaying along to her buddies rather than resting. Though there were only four of them, their camaraderie simulated an enraptured audience, which surely helped their number seem less awkward in the empty auditorium. They were a joy to behold.

The penultimate offering of the festival was the central duet from Lar Lubovitch’s 1986 work “Concerto Six Twenty-Two.” It was resurrected during Covid in a considerate parallel to its original purpose, to honor sustaining friendships during the AIDS pandemic. It was tenderly performed by Adrian Danchig-Waring and Joseph Gordon of the New York City Ballet, partners offstage as well as on. The piece’s focus is purity, from its clean shapes to its Mozart score to its costuming: matching white polos and pants. Both men danced with a softer, more rounded quality than I am used to seeing from either of them—perhaps because Lubovitch himself coached them in the work. Whatever the cause, it was lovely.

But the best work of the night—of the whole festival—was Kyle Abraham’s solo “to be seen” for Calvin Royal III, who was making his debut as a newly-appointed principal of the American Ballet Theatre. Last year, too, Abraham choreographed a solo, “Ash,” for a groundbreaking Black artist from ABT: Misty Copeland. It was great; but this year’s was a revelation. I didn’t expect it after the intro video in which Abraham discussed its creation. He explained that he had made some versions of the solo on himself, but he was stuck without another body in the room. Royal was trapped in a bubble (a term surely in the running for the Oxford Dictionary’s word of the year) for another project and was unavailable, so Abraham tapped NYCB principal Taylor Stanley as a guinea pig and co-collaborator. Abraham has made a few fabulous solos for Stanley now, including the meaningful “ces noms que nous portons” which he danced on the Lincoln Center plaza back in July. Abraham explained that his physical interactions with Royal were limited to just one studio rehearsal the day prior. How unfortunate for Royal, I thought, not to have a more hands-on experience.

I needn’t have worried, for Royal slipped into the steps like a second skin. When the curtain rose along to the snare drum that begins Ravel’s “Boléro,” Royal was standing casually in silhouette with his back to us—a Black man wearing a hoodie in the dark. The lighting (by Dan Scully) changed to reveal that he was dressed all in white. He turned to face front, ceremonially removing his hoodie as the flute played the first round of the score’s earworm phrase. He stared directly into the camera/audience, as if into a mirror, while he nonchalantly adjusted his white blouse underneath. When the clarinet took over the theme he strolled over to the wing and purposefully slid the hoodie offstage.

The backdrop faded to black as he eased into a dance, at first wriggling his arms to the seductive, Spanish melody. He was both snake and charmer. He often established a perfectly-placed port de bras before coolly shrugging it off. Or he would craft a textbook tendu or arabesque and then slink out of it. Sometimes he accentuated the percussive backbone of the score instead, with a half-limping walk, for example. But he was always contrasting ballet moves with street ones: upright turns and soaring jumps alternated with swaggering struts and breakdancing floorwork.  Nobody weaves together uber-classical vernacular, pedestrian gestures, and club dances like Kyle Abraham.

Abraham also loves to reference the ballet canon. “Swan Lake” is a go-to. He had Royal quote Odette’s folded swan pose, complete with little flaps to strums in the score. But those flutters evolved into flicks and then funky pulses, like in popular dancing. Royal also quoted the Atlas-holding-up-the-world moment from Balanchine’s “Apollo”—in which he debuted to great acclaim last year. Interestingly, as the young sun god Royal was tightly bound, coltish. Here was smooth as butter. He was as cockily suave dashing off multiple pirouettes as he was dusting off his lapels. And that was the genius of this solo: Royal was simultaneously the epitome of an elegant story ballet prince as well as a brash young guy primping in front of the mirror for a date. In “to be seen,” Abraham and Royal showed how naturally those poles can coexist within the same Black body.

That Royal appeared to be dancing in front of a mirror was key. It made the piece read as a brilliant, modern take on Jerome Robbins’s navel-gazing “Afternoon of a Faun.” It also referenced the weighty title: “to be seen.” Royal appeared to see himself: proudly, boastfully. And we saw him too—as a member of an underrepresented minority in the ballet world (he is only the third Black dancer to attain the principal rank at ABT) making claim to one of the most famous pieces of classical music for fifteen straight minutes.

But Abraham referenced unsettling moments too: as when Royal put his arms up as if ordered to do so by cops, then clasped his hands in begging. It felt like a contemporary stickup, but between the militant snare drum and the fact that he was costumed (by Karen Young) identically to the figure before the firing squad in Francisco Goya’s painting Third of May 1808, it made for a loaded visual. The maddeningly repetitive nature of “Boléro” contributed to the multiplicity of possible interpretations in every moment. It was as if Abraham was asking: haven’t we been here before? Oh yes, so many times.

Again, that was what made “to be seen” so fantastic. Abraham contextualized Royal—a singular, mega-talented artist—within so many different historical and cultural frameworks. He was the Swan Queen and her prince, a god, a prisoner, a rebel, and every Black man—yet utterly himself. He also looked nothing like the wonderful Taylor Stanley, who was called to pinch hit as partial muse and clay for this solo.

Royal was there “to be seen,” but especially, to force the audience to ask themselves how they saw him. What did he cast off when he threw away his hoodie? What remained? It was a thrilling work. I haven’t been this excited about a new piece of choreography since Pam Tanowitz’s “New Work for Goldberg Variations” (2017) or, well, Abraham’s “The Runaway” (2018). Let’s pray that the FFDF can happen again in person next year, and that Kyle Abraham gets another commission.

Previous
The Flip Side

Next
Muted, but Live