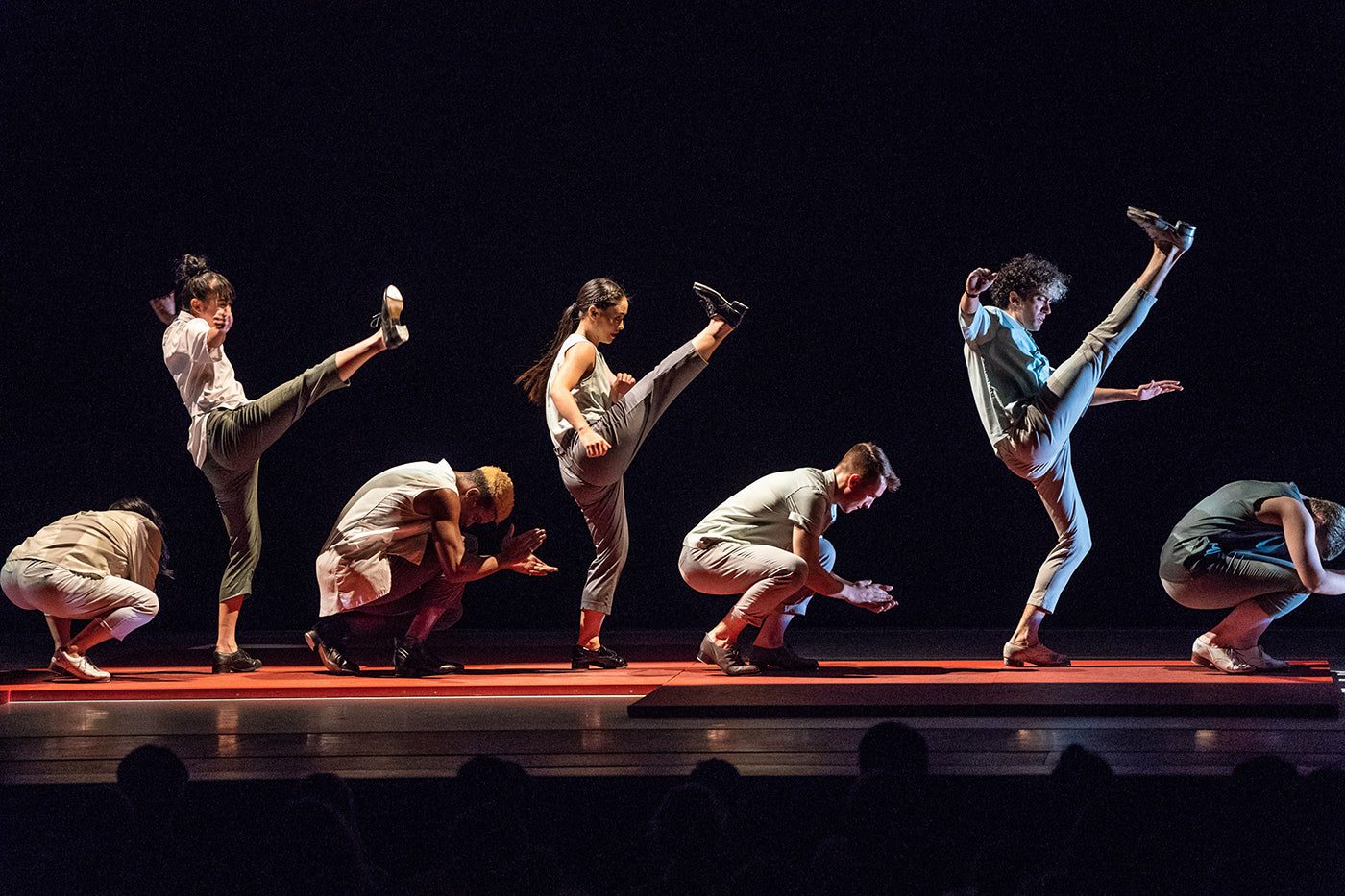 High kicks and world premieres at Fall for Dance Festival

Sixteen years in, City Center’s Fall for Dance Festival continues to deliver. The shows can sometimes be a mixed bag, but the variety of programming is always interesting and the theater is unfailingly abrim with positive energy. There’s good reason for this: with every seat in the house costing just $15, world class dance companies are as accessible as movie tickets. The entire run is sold out this year, as usual. On opening night the crowd was a balanced blend of young and old, the gussied up and the flip-flop-wearing. The diversity of the entertainers on the stage also translates into a diversity of people in the seats. I promise I’ll get to the dancing, but that achievement had to be lauded first.

Program 1 began with Hubbard Street Dance Chicago performing Crystal Pite’s duet “A Picture of You Falling.” This two-hander, not really a pas de deux until the final section, had voiceover narration by a vaguely British-sounding woman (Kate Strong). The dancers literally enacted whatever she described. When she said “this is your hand reaching back” Alicia Delgadillo reached her hand back. When she said “the light is changing” it did so. It felt very sci-fi, as if the dancers were dogged by a Siri-like omniscience. As in many Pite works the set was compellingly lit (by Robert Sondergaard) and the stagecraft (Peter Chu) was a major component of the dance. This one was just less successful to me than some others. It was like a so-so episode of Black Mirror. There was, however, one standout solo for Elliot Hammans to mechanical noises and heartbeat sounds. His whack backbends and pop and lock moves suited the grinding, thumping, and buzzing in the score (by Owen Belton). His prowess received some whoops from the enthusiastic crowd.

Next the Vuyani Dance Theater from South Africa presented “Rise” by its creative director/founder Gregory Maqoma. The curtain rose on almost the full cast of dancers bathed in red light and exuding swagger. The thirsty crowd cheered this initial tableau. Drake’s “God’s Plan” commenced and the dancers were spot lit when they started to move, a square patch of light appearing on the ground beneath them like on a disco dancefloor. With a DJ presiding in the corner, this opener approximated a fun club scene, though it was marred by some missed lighting cues and troubles with unison. The dancers had perhaps too much anxious energy out of the gate.

The troupe’s nerves seemed to evaporate with the appearance of one-legged Musa Motha, who calmly proffered his hand to the statuesque Thabang Mojapelo for a spellbinding pas de deux to Billie Holiday’s “Strange Fruit.” Using his forearm crutch in myriad ways (as a counter-balance, a kickstand, a pivot, a fulcrum), their duet inventively expanded the possibilities of the traditional romantic pas de deux. Their daring off-balance work evoked Balanchine but pushed beyond into new territory, it was breathtaking. Following their lead, the dancers became steadier and more unified—Roseline Wilkens was especially magnetic. And Maqoma’s choreography included one of my favorite trends in dance these days, petit allegro (here jetés battus) to rap music.

Their daring off-balance work evoked Balanchine but pushed beyond into new territory, it was breathtaking.

After the intermission came one of the most-hyped events of the festival: the world premiere of Kyle Abraham’s commissioned solo for ballet superstar Misty Copeland. Copeland’s entrance applause was rapturous, the audience was psyched. But this solo, “Ash,” was not a showy affair. Instead of being a whizbang tour-de-force, it was a stripped-down meditation. The stage was raw, with the back wall of the theater and the booms exposed (lighting and sets by Dan Scully and Dan Stearns, respectively). Copeland was costumed by Reid Bartelme and Harriet Jung in a plain leotard with diaphanous attachments of white silk from her shoulders to her hips. The bulbous loops floated around her frame, becoming a major component of the choreography. She resembled bioluminescent cnidaria, with her extremely hyperextended, sculpted legs and highly arched feet approximating billowy tentacles even in the repose of a tendu. She was nearly silhouetted: only when the lights went up for the bows did I realize that her leo was made of gold velvet. The music—by Ryuichi Sakamoto and Alva Noto—was murky too. It consisted of static pulses, white noise, base thumps, and violin screeches.

The overall effect was aquatic. Copeland never jumped; gravity was not Abraham’s preoccupying force. Instead he had Copeland glide around the stage, occasionally erupting into a string of double swivel turns to one corner or another as if being caught up in a little current. Abraham takes great care in finnicky transitions between turned out and turned in, between bent and straight legs, and in Copeland’s eerie shifts in gaze. In “Ash” these details evolved slowly, as if underwater—though a few times Copeland broke out in a flurry of little prances rolling through her feet. I loved it. Once again, Abraham has taken a stodgy ballet convention—here the established diva solo—and updated it. In the vein of Fokine’s “The Dying Swan” he gives us The Moody Jellyfish. Though the crowd may have expected a flashier Copeland and more popular music, they were generous in their response. Even when Abraham quietly slipped back into his seat in the pause after bowing, he was greeted with applause and yelps from those in the neighboring sections. Reader, I clapped.

Thankfully, Caleb Teicher’s “Bzzz”—another FFD commission and world premiere, closed the program in splashy style. From the moment the talented beatboxer Chris Celiz snuck in front of the curtain, to the bad ballet adagio spoof at the end, Teicher and his company were a delight. They were also witty and thought-provoking: “Bzzz” was a big closer but it wasn’t just candy. The interplay between Celiz’s beatboxing and the troupe’s tapping was exploratory and nuanced. As was Teicher’s incorporation of multiple genres of dance (you’ve got to love a tapper who also likes high kicks!). The set was a raised wooden platform of connected squares, and Teicher and his cast made much of the contrast of tapping on the wood versus the muted Marley floor beneath. Teicher pays almost as much attention to geometry as he does to rhythm—as when his cast performed a series of simple toe taps in ascending height order in decelerating speed, and then did it with each dancer reaching their toe back further in space down the line.

And what fun they all appeared to be having! Teicher in particular is a light. He gives the impression that he goes through life smilingly investigating the acoustic possibilities of every waking moment—the world’s nicest worst upstairs neighbor. The audience leapt to its feet in euphoric release at the end of the night, which was happily, duly merited. I kept thinking: how great is it that so many people just can’t wait to lose their minds over a Tuesday night dance performance? Fall for Dance is an annual gift, one of those special happenings that makes me so proud and grateful to live in New York City.