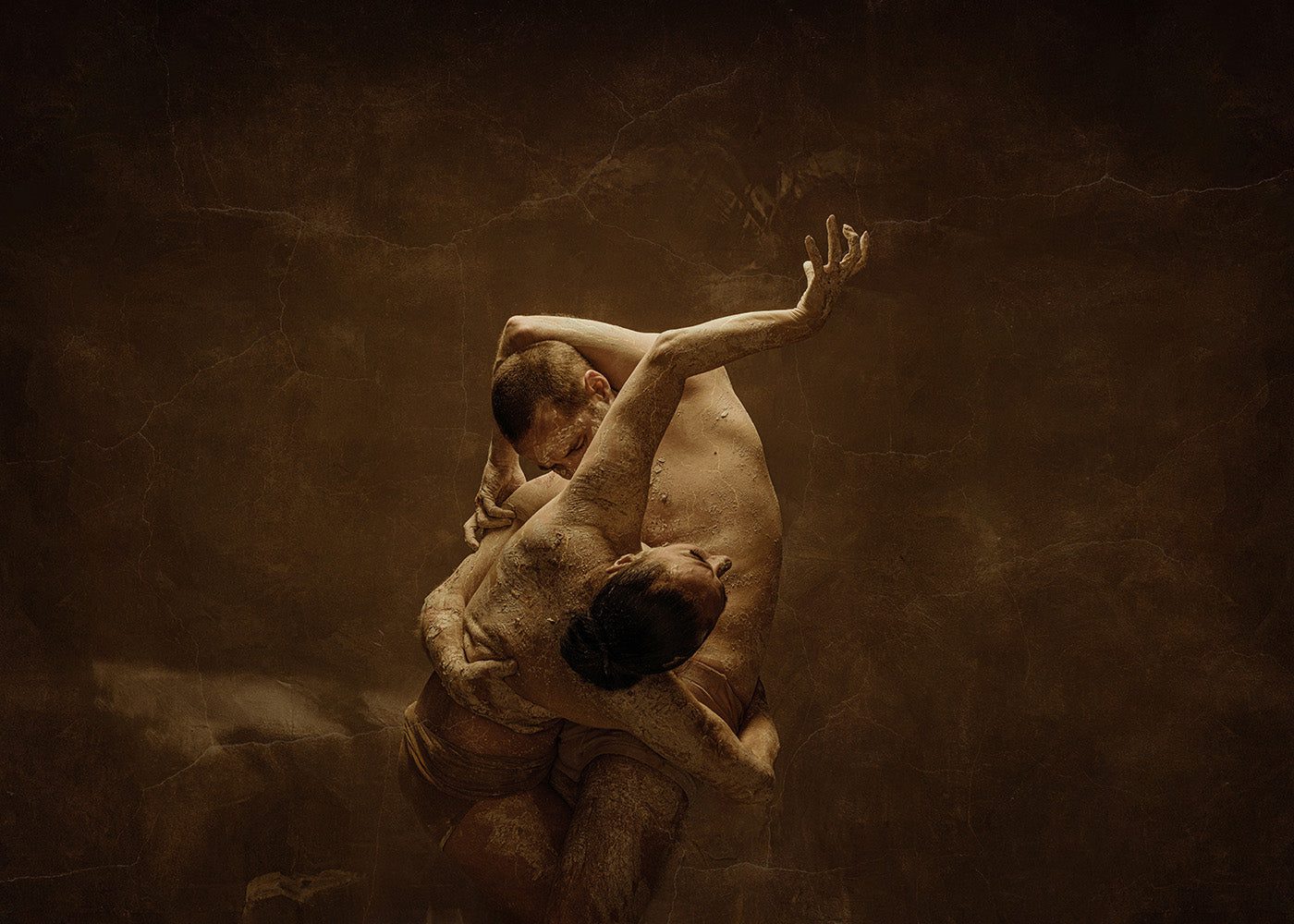 The wavering, crepe paper-thin voice of an old man sings on a loop: “Jesus’ blood never failed me yet, never failed me . . . yet, Jesus blood . . . never failed me yet / This one thing, I know, for he loves me . . . . So.” This is the first track of the soundtrack of the delicate, beautiful film Worn, screened through the Byre Theatre St Andrews, and could only be an appropriate choice to open. The heartbreaking track, by composer Gavin Bryars, samples the singing of a homeless man recorded on the streets, a vulnerable man clinging to his faith like a branch in a storm. So too, do the dancers cling, to nuances and to each other.

Errol White and Davina Givan are the dancers, a duo who are married in real life, who interrogate large themes through their exquisite choreography. In this film, the aforementioned nuances are of human frailty and fallibility, explored through the body, yet also the strength and resilience. Together, they sometimes lie tangled up; sometimes, never quite reaching. They initially move in baby steps, tentative, testing out a new terrain. There are occasional Butoh influences at the beginning, in the disquiet of the quiet, the eerie stillness and near collapse. White cradles Givan as she slips, over and over, from his grasp. Then their steps are contemplative, meditative. There is a pleasing circularity here, a languid kind of lyricism to the bodies and their curving shapes.

Their extensions emulate the hands of a clock, time elapsed, and slipping away. Often they rise like cranes in a dimming skyline. But as the camera pans away, it is as though they are on the moon, figures trying to make contact and reaching outwards from a static position. They are not quite othered though, as so much contemporary dance seems to fixate on othering, on etheral bodies. This is absolutely corporeal, a display of flesh and blood, sweat in embraces and the promise of the tastes of potential kisses. When White seems to disappear at one point, Givan follows. It’s as sexually-charged as it is moving to witness. You cannot fake this kind of chemistry.

Givan arches her back, as White ominously creeps around her in a circle. She rises, and together they are locked into a tentative half-crouching dance before lifts and slow tumbles. Soon though, they crawl away from their respective spaces, as though testing out a parting of the ways romantically. And Travis’ heartbreaking confessional speech to Jane from the classic film Paris, Texas frames Givan’s gorgeous, dreamlike solo which sees her almost grow visibly taller—a trick of the camera, but also through her graceful skyward stretch.

It seems mired in this tension—the push towards, and pull away from—each other, together, yet separate, but always returning to the source. Sometimes they are more akin to warriors rather than loving partners, with hands on thighs, almost swaggering. It all culminates in little  tests of strength, where both grapple in an increasingly intense embrace, and an attempt to lift one another up—clinging, clinging, always back together.

The gentle electronic creaks and cracks of the beautiful soundtrack from Tiago Cerquiera create a modern framework for the piece—there’s little here that doesn’t feel very much of the moment. This is further reinforced by the stark, sci-fi neon blue lighting from Simon Wilkinson, which obscures then reveals in equal measure.

The gold cracks on the floor, inspired by kintsugi, the art of using gold and silver to mend broken Japanese pottery, here designed by Yvonne Buskie, could be cracks on the pavement, or tendrils of plants in spring, buds blossoming, and as the two reconvene, there is the sense of resolve, of two working things through, despite all obstacles in the path. Clinging, becoming one, they’re stronger together.