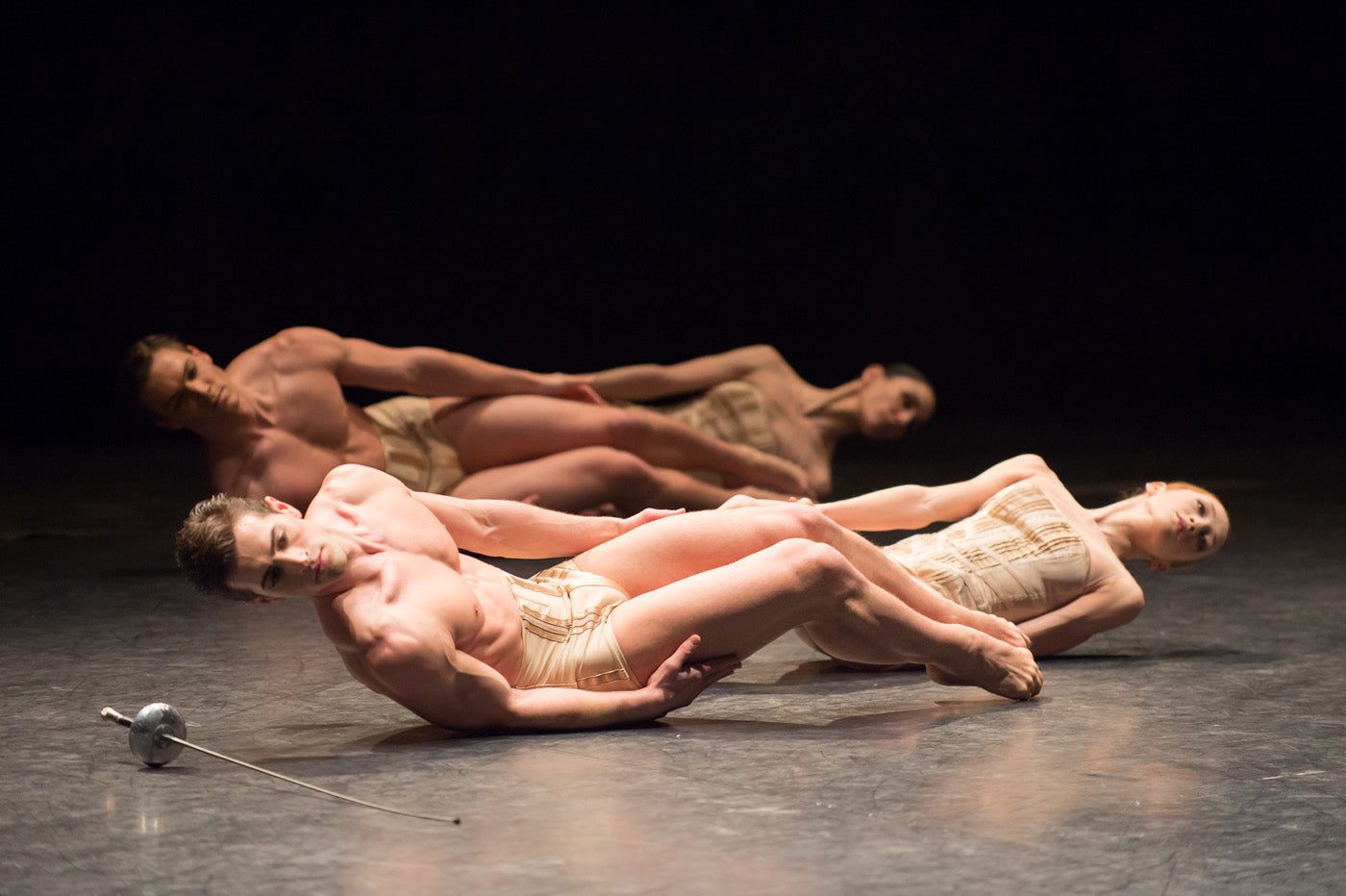 This triple bill weaves together works by three seminal twentieth-century choreographers: Jiří Kylián, John Neumeier and William Forsythe. As critic Sarah Crompton points out in the programme notes, each of these so-called ‘modern masters’ spent the early years of his career at the Stuttgart Ballet, where a hotbed of artistic innovation bloomed under the direction of the late John Cranko, who encouraged his dancers to create their own works during his reign as director in the 1960s. Together the works on display form a splendid retrospective on the ballet scene of the late twentieth century, and mark English National Ballet’s flagship performance as Sadler’s Wells Associate Company, a partnership I can’t wait to see develop further.

Not much thematically or even stylistically unites the pieces in this programme, though each offers its own play on classical technique. The highlight of the evening for me was Kylián’s “Petite Mort,” the only work here ENB has previously featured (Tamara Rojo included it in the first programme she put together as artistic director back in 2012). Kylián created the ballet in 1991, but it feels fresh as ever under Rojo’s eye, its many impassioned embraces casting a surprisingly life-affirming glow over the title’s chilly association between sex and death.

The piece is as silken as the satin corsets its twelve sculpted dancers (six men, six women, including Rojo herself) wear as they swoop and sprint to the heartbreakingly beautiful notes of two Mozart piano concertos. Crisp angles and boxy shapes pepper the choreography, and dramatic visual effects—swishing swords, whooshing sheets, illusory costume changes—enrich the performance without overwhelming it. After all-male and all-female sections, the dancers break into couples, each communicating their own narrative of tiny struggles and bigger triumphs. Rojo’s performance here is especially fiery and drew eager applause from my neighbours in the audience before it was even over. The balance of erotic and elegant that Kylián’s choreography demands is no easy feat, but it’s a challenge the cast rises to with aplomb.

Lyrical and lively, Neumeier’s “Spring and Fall” suits the company well, with its wistful glances and gentle curves set against a watercolour backdrop and the soft strings of Antonín Dvořák’s Serenade in E. Though plotless, the ensemble ballet traces a story of collapse and recovery: the motions of its title appear constantly in the form of leaps and drops, jumps and tumbles, the dancers suspended in the air one minute and surfing the floor on their backs the next.

With five separate movements, it’s a lengthy piece and noticeably so—the dancers sustain the elated tone throughout, but past the third movement their expressions of abandoned joy lapse into forced grins. A lovely duet between Alina Cojocaru and Alejandro Virelles helps buoy this latter half, as does a finale of swinging limbs and ambitious partnerwork, but I found the piece on the whole disappointingly tame. It’s pretty enough but lacks any real heat.

Forsythe’s “In the Middle, Somewhat Elevated” on the other hand, crackles with electricity, the piercing industrial soundtrack and punchy choreography conjuring a prickly air of tension. The dramatic piece channels the prima donna spirit of the Parisian powerhouses it was created for back in 1987, among them Sylvie Guillem and Isabelle Guérin. Dressed in black footless tights and glinting emerald leotards, the ballet’s six women coolly appraise one another, strutting and showing off sharp extensions and hyper-extended leaps. Between tricks the dancers abandon their composure and nonchalantly shake out their limbs, cool and carefree. Three men join them—among them rising star James Streeter, on excellent form—but there’s no question this piece belongs to the ballerinas.

“In the Middle” requires attitude in spades, and ENB’s dancers oblige with gusto, Erina Takahashi in particular, her daunting flexibility and fierce mien a winning homage to Guillem’s historic role. With its sleek athleticism and twisted, at times jarring shapes (it’s difficult to write about Forsythe without mentioning his flair for deconstruction), the piece appears resolutely modern, though at its core classical elements—traditional structure, a strong focus on the women—reign supreme. In any case, it’s charged and spirited—a perfect note to end the evening on.