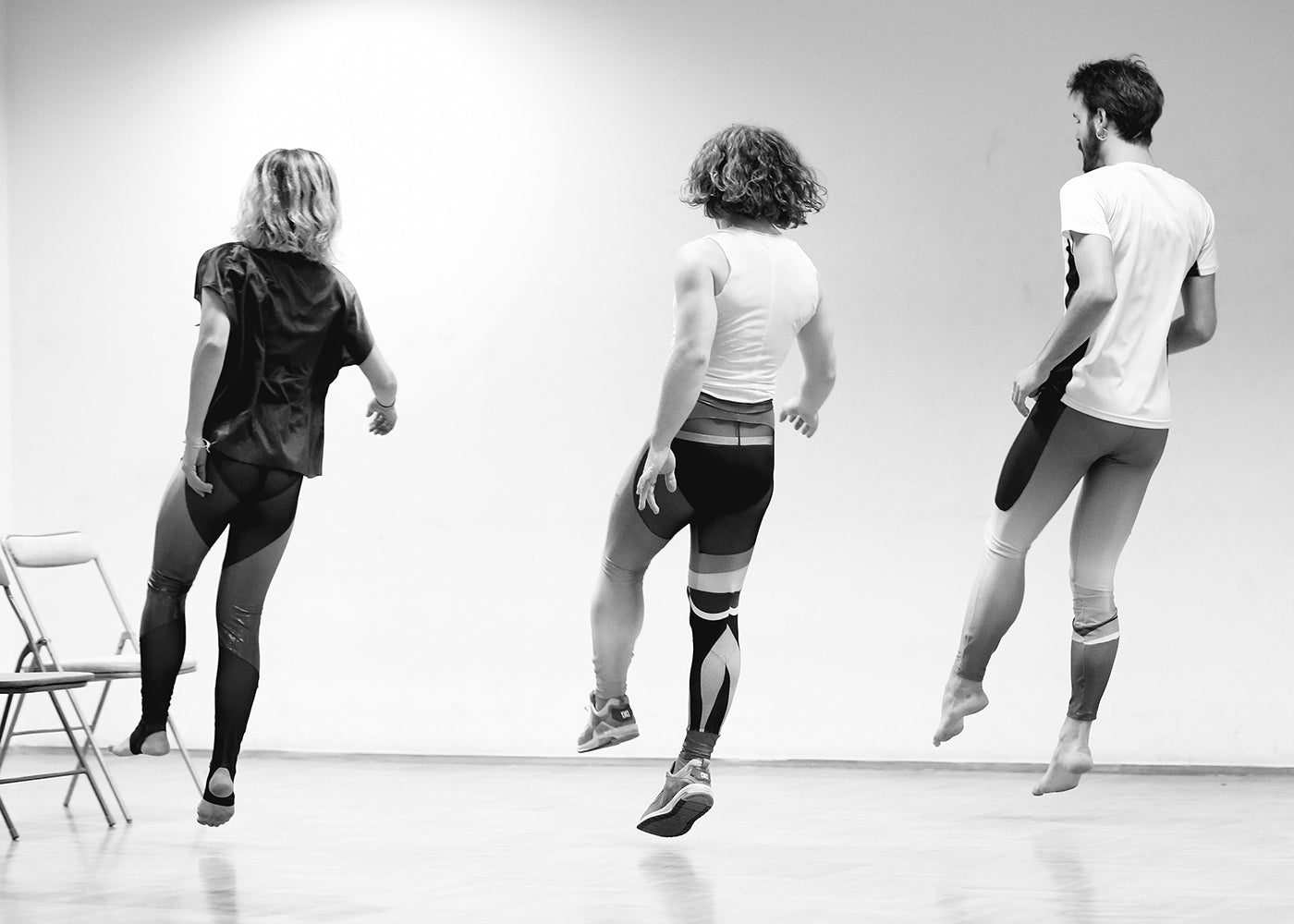 We enter DNK: Space for contemporary dance and performance, and right at the door we are greeted by the three co-creators and performers Aleksandar Georgiev, Zhana Pencheva and Darío Barreto Damas. Smiling and warming up, the dancers thank us for attending the Sofia premiere of their new piece, “dragON aka PONY.”

The dancers are strikingly dressed in costumes by Ralitza Toneva; an arresting and enigmatic scramble of blue, black, lace, mesh, neon and off-the-shoulder fringe in three unique cuts. This first glance pleasantly jogs my memory of another colorful and quirky contemporary production at the Joyce Theatre’s 2018 NY Quadrille festival—Rashaun Mitchell and Silas Riener’s “Switch.” The neon bedazzled costumes, the soft greeting of the audience, the intimate seating encircling three sides of a thrust stage, the dancers casually warming up their joints followed by choreography that is both formal and rebellious. It is reassuring to see joyous, innovative work in the Bulgarian context and to recognize it as an astral twin of a performance from the other side of the Atlantic.

The three performers establish a curious relationship with each other and us from the very beginning. Instead of simply starting, the piece slowly teases and oozes. With their backs turned to us, clad in the shimmery spandex, they begin a shuffling step that travels downstage. It’s a slow hip-to-hip bumping motion that becomes a procession as they advance to eventually face us. Over the next 30 minutes, the trio initiates a string of increasingly complex unison sections blending ballet, ballroom, modern and commercial dance vocabularies to a joyful and, at times, comedic effect.

According to the program, “within a frame of contemporary pop, the work revives geometrical choreography through the prism of classicism and the usage of folklore as a ritualistic form.” The result is fascinating and demanding, a long structured series of turns, hops and shimmies that recall the rigor and complexity of Twyla Tharp’s “The Fugue.” Small sections allude to pop music videos while the three performers interact with each other with defiance. It’s as much of an exercise in deciphering choreography as a collective basking in the uncertainty of what we are watching exactly.

As Georgiev, Pencheva and Damas increasingly pepper their struts and chassés across the stage with sass, one more element of the work emerged—the white lights remained stark throughout the whole work, allowing us to witness audience reactions. Some audience members were elated, bouncing to the thumping techno beats in unison with the performers, others seemed skeptical. Indeed, the work sets out to challenge the Bulgarian audience with boldness in a context where dance is still valued primarily for the athleticism and virtuosity demonstrated. “dragON” is offering an alternative display of abandonment.

Yet, the approach falls short in moments when the performers are caught in between pedantic choreography and the sultriness of the characters they’ve created, with overly eager smiles and sexy moves. They are alluding to the sensuality of a drag performance but seem too cautious to commit.

Towards the end of the piece, when more sweat, hair, and drums join the mix, it gets really fun. The characters come to life through cheeky solos, with Pencheva seductively crawling and locking eyes with the audience. When the joy in the piece is openly acknowledged, such as in a ballroom dance-inspired bit, the concept of the work shines through. Throughout “dragON,” the relationship between the three remains mercurial and ever-changing, adding another endearing element to a jubilant piece that needs to turn up the volume just a bit more.