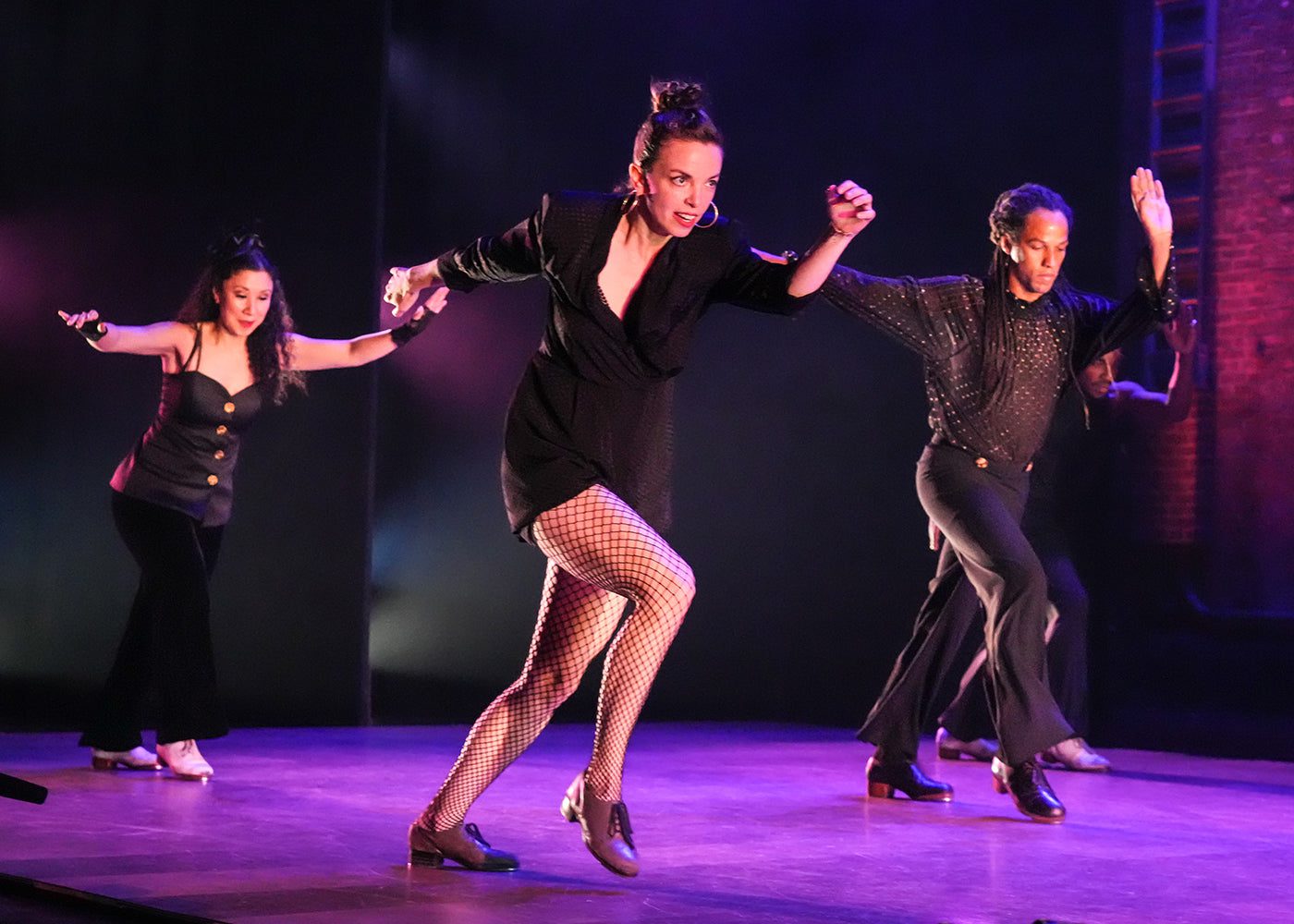 The last time I saw Michelle Dorrance perform in person was in her breakthrough production of “Soundspace” (2013). I remember my view from the risers at the short end of St. Mark’s Church, where she had gathered what seemed surely every available tap and body percussion artist in NYC. I remember the generosity with which she showcased her fellow artists—and also, socks. Imagine rhythm tappers wearing socks! It was an experiment that both paid tribute to the tap great, Jimmy Slyde, and protected the wood floors of the historic building. That show raised Dorrance’s star. She had already been recognized with the Princess Grace award. But soon came the MacArthur Foundation Fellowship and a Jacobs Pillow residency. At the Joyce this week, I was happy to see both generosity and slide still in evidence—if not actual socks. This program of three premieres doesn’t so much break new ground as celebrate what has led to this moment. Dorrance both looks back in homage and pays it forward by opening a door for a new artist collaborator, musician and vocalist, Aaron Marcellus.

For “Rhythms of Being,” Dorrance gathers five women, all alums of “Stomp,” the gritty long running off-Broadway show that Dorrance performed in for several years: Allison Easter, Kimmarie Elle, Fritzlyn Hector, Stephanie Marshall, and Vickie Tanner. (Dorrance is billed as an alternate performer for “Rhythms,” and the night I attended, she indeed danced in the quintet.) The work opens with the women gathered in a tight circle, arms draped across each other’s shoulders, a quiet shuffle rising like dust from their feet. As the circle opens out, the conversation gets louder, not only from the feet, but in a complex rhythm of hands clapping the chest, torso, hips and each other. Using call and response with plenty of cheeky attitude, the group steps back to let each performer take a solo turn. The syncopation, intricate patterns, and dizzying pace is hypnotic. It’s as if the performers are connected with electrical wire. They are so intent on each other, the audience may not exist. They’re having a high good time. Presenting a tough facade, dressed in jeans and rough boots, the women are a community of mama bears giving each other support. “Rhythms of Being” ends as it began, the women tightening their circle, turning inward to each other, Dorrance’s way of acknowledging what it is to be female.

“A Little Room” is a duet by Ephrat Asherie and Dorrance, performed downstage within a narrow opening of the curtain. In athletic shoes and matching suits, they take on Asherie’s gutsy street dance moves inspired by hip hop, house, and vogue. Energetically exuberant, the brief duet seemed more about the respect between two artists than in finding something new at the intersection of their different talents. It didn’t cast either artist in her best light—literally, in that there seemed a difficulty with a strobe light the night I attended. The flashes intended to capture striking shapes didn’t quite land.

“45th & 8th ” was the evening’s pinnacle, featuring live music of Aaron Marcellus and a buoyant tap ensemble of six. Dorrance was joined by Leonardo Sandoval, Claudia Rahardianoto, Elizabeth Burke, Luke Hickey, and Byron Tittle in making sound with every part of the foot: toe balances, heel drops, wing steps that brush to the side, a luxurious scrape of a foot in a slow wide circle, and yes, the slide, where a dancer skids across the floor as if on ice. Dorrance calls up the artistry of the famous Nicholas brothers in the way she launches her full body into the project, arms as ballast, while her feet chatter wildly. It gives us as much to watch as it does to hear. Sandoval made a series of turns in a wide circle that evoked the kind of crowd pleasing grand jetés of a classic ballet danseur. Add to that the chance for each dancer to improvise with a live quartet onstage (Matt Parker on horns, Marcellus on keyboards, Gregory Richardson on bass, and Kyle Everett on drums) and the tap dancing explodes into a shower of variations. Twice Marcellus stepped out from behind the piano to vocalize soulfully and ended the show by scatting while all six dancers tapped their hearts out. It was the joyful noise we needed for the holiday season.

Next
Nuts and Bolts