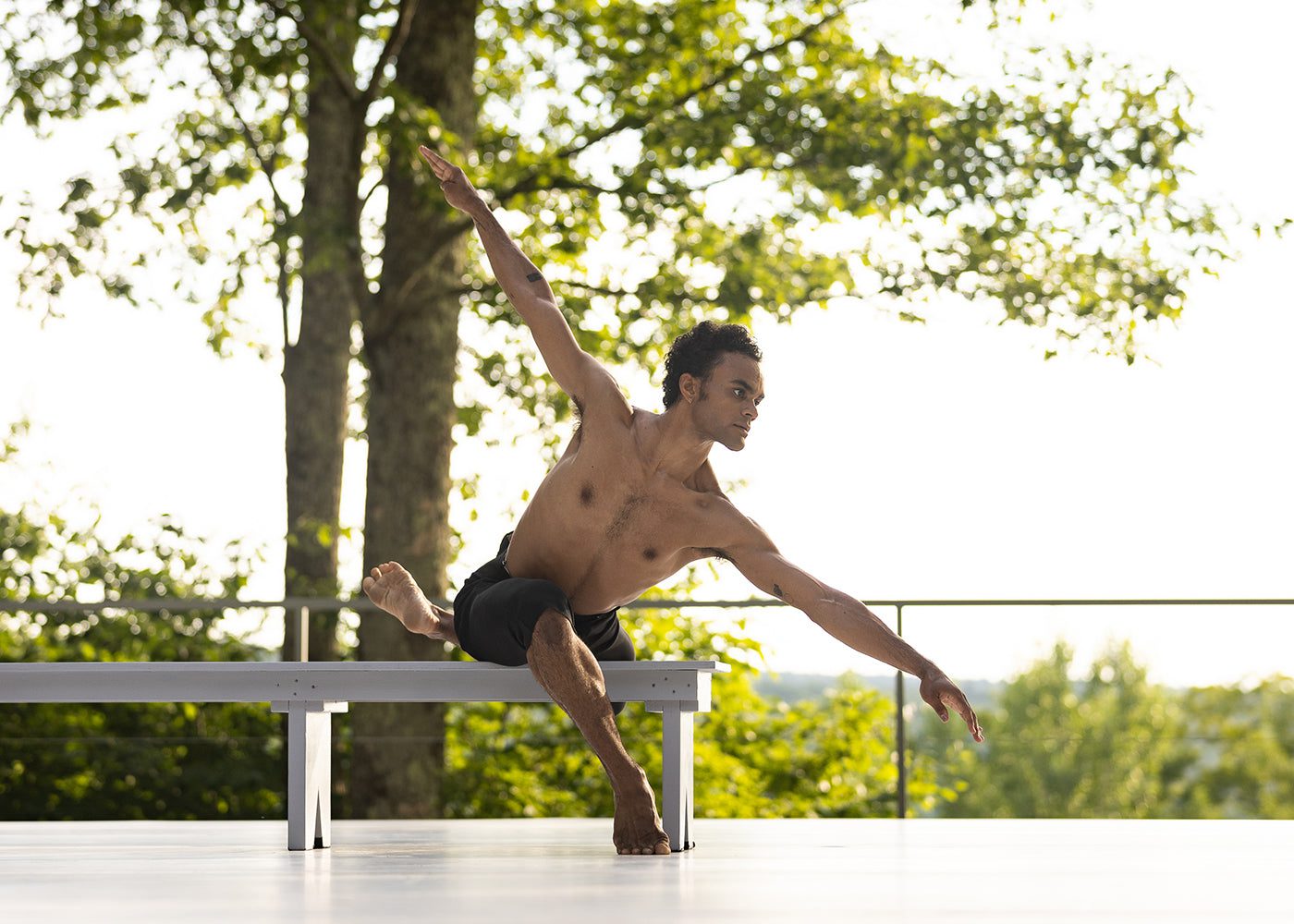 How It Started, How It’s Going

In the archives at Jacob’s Pillow a 1948 video of Talley Beatty performing “Mourner’s Bench,” plays on a loop. In the space of a couple minutes, Beatty moves fluidly through wave-like motions, contracting and extending his body with a coiled intensity searching for release. The black and white footage is silent and flickering, and it is difficult to make out the expression on his face. Watching it over and over, I am struck by how Beatty continues to rise up with a Phoenix-like quality, eventually lifting up so much he executes a precarious one leg balance and promenade on top of the narrow bench. Near the end, he rolls side to side on the bench—roiled with grief, presumably—pausing in big arches of his spine in a gesture of supplication before crumbling to the side of the bench. The effort and intention strike a universal human chord, though “Southern Landscapes,” the work this solo is excerpted from, was based on the particular: inspired by Howard Fast’s novel Freedom Road which was set during Reconstruction and addresses both interracial coalitions for progress and the devastating advent of the Ku Klux Klan.

“Dichotomous Being: An Evening of Taylor Stanley,” gave this deeply reverent solo new life for the 90th anniversary season of the Jacob’s Pillow Dance Festival. As part of a program that included works from Andrea Miller, George Balanchine, Jodi Melnick, and Shamel Pitts, as well as an eclectic cast of standout dancers, “Mourner’s Bench” had its own gravitational pull, bringing the audience to the edge of their seats before eliciting the first of two standing ovations that evening. Thanks to Kyle Abraham’s vision as artistic advisor and the Pillow’s own Norton Owen’s brilliant curation of “Mourner’s Bench,” “Dichotomous Being” wove a powerful dance artifact into a forward-thinking evening.

In the version Taylor Stanley performed, reconstructed by répétiteur Kim Bears-Bailey, more details and images were illuminated thanks to the magic of live art and Stanley’s empathic presence. Sliding across the bench in a series of contractions, Stanley’s hands curled into fists in the air, so intensely they shook. Later, their hands shimmered, emanating out from them like incantations. Stanley became the bow of a ship—a striking and ominous image given the history of the slave trade in America—as they arched forward with their torso, legs wrapped around the bench behind them. Outdoors on the Henry J. Leir Stage, the natural setting of sky and trees, complete with rushing wind, felt like necessary design rather than a pivot. (This program was originally slated for the Doris Duke Theatre which was tragically destroyed by a fire in November of 2020.)

Later, Stanley took the infamous promenade nearly off the bench, striking a virtuosic balance with their heel floating in mid-air for several seconds. Throughout, the traditional spiritual “There is a Balm in Gilead” added the context of salvation to the strife. Stanley so channeled the essence of Beatty’s choreography that it was hard not to feel an emotion akin to hope even though we were also being asked to hold space for trauma and anguish.

This ability to hold two opposing ideas at once—or in the case of Stanley, who clearly contains multitudes, perhaps more than two—reverberated throughout Stanley’s marquee evening. That same spirit of generosity that compelled them to embrace such dualism also showed itself in the casting, as Stanley shared, and at times even yielded, the spotlight to his fellow dancers.

In “Mango”—a pas de quatre by Andrea Miller, adapted from Miller’s “Sky To Hold,” originally commissioned for New York City Ballet’s Fall Fashion Gala last year—Stanley, Nouhoum Koita, and Sebastian Villarini-Velez expertly partnered the dazzling Ashton Edwards. In a short solo opening up the excerpt, Edwards showed off their exquisite pointe work and gorgeously extended lines—a star on the rise, and in their element. The revamped casting disposed of cis-heteronormative melodrama and injected some verve into a work that was surprisingly dull when it premiered. Their energies literally lifted one another up and the result was eye-catching, whether in quiet moments when their heads met as they rose up from the floor or in the big lifts where Edwards was tossed and caught by Stanley.

The world premiere of “These Five,” by Jodi Melnick, was another chance to appreciate the unique community of artists Stanley brought together over two Pillow residencies. The five: Allysen Hooks, who shared an intriguing evening of her own choreography at Arts On Site earlier this month, joined Stanley along with Marcella Lewis, Ned Sturgis, and Cemiyon Barber. (Barber and Stanley notably shared the stage previously in Christopher Williams’s reimagining of “Narcissus.”) The work played with the relationships and juxtapositions of the dancers; sometimes they casually bumped into one another, other times they purposefully picked up a partnered phrase where another dancer left off. The vocabulary was easeful but not pedestrian, their tableaux unfussy and architectural. The clear comfort they took in their choreography was a reminder to take a deep breath. A section of simultaneous solos felt like watching children embrace the pleasure of parallel play—what could be better than being able to follow your own path, but together?

Melnick heightened our awareness of being in nature as the dancers brought large branches onto the stage and moved to a soundscape by James Lo that included birds chirping and thunder. The wind began to blow more intensely as the piece progressed; the patterned fabric of their costumes billowing in the large gusts.

Near the end, Stanley engaged the group with a solo comprised of gestures. In a shirt cut to expose half of their torso, they composed a story with their arms, complete with a pantomime of quotations marks and their hands covering their heart. The others watched Stanley from the ground, offering their full attention. When Stanley knelt to join the others, the work ended with their bodies draped in a satisfied repose.

The bookends of the evening paid homage to Stanley’s roots and gave a glimpse into where they may be headed. A very short excerpt from George Balanchine’s 1957 work “Square Dance” opened the show. There were no fireworks, just the vulnerability of a tendu with a shapely carriage of the arms; later, a wide fourth position, bending backward, heart to the sky. Stanley disarmed the audience with their simple elegance and squeaky-clean technique—their musicality and soft, swift shifts in dynamic a reminder of why Stanley commands so much respect in the repertoire of New York City Ballet, in addition to acting as a muse to many of the choreographers who have passed through the company in recent years. One can only imagine what new heights Stanley would have pushed Balanchine to creatively.

The world premiere of Shamel Pitts’s “Redness” (associate choreographer Tushrik Fredericks) was the final and most challenging work of the evening. Stanley has spoken often of their love for Gaga technique and Pitts is one of Gaga’s most sought after practitioners and teachers. In a flesh-toned unitard with brown trunks and trim and a large circle cut out on their chest, Stanley began in a sort of bear crawl position. Hands flexed, they walked up an imaginary wall to stand. Dropping into a deep second position plie, Stanley interlocked their arms in front of their chest. Moving to electronic music collaged by Fredericks, suppleness gave way to flicks and twitches. Journeying to or through, they traversed the stage on their knees, moving their arms as if to throw something over their shoulder. Sounding more and more like a heartbeat, the rhythm pushed Stanley forward and back in a repetitive step that had them clutching their heart.

An itchy, fragmented climax ended with Stanley facing upstage, body still, arms reaching up. Slowly, they dropped down to their knees and bent backward, until their head touched the ground. When they got back up, they found themselves in an altered atmosphere. Reprising all the movements in a freer and lighter style, Stanley was still exploring as the music dropped out. When they eventually walked their way out of the dance and came face to face with the audience, feelings of big love and mutual appreciation were palpable.

Next
Down to Earth