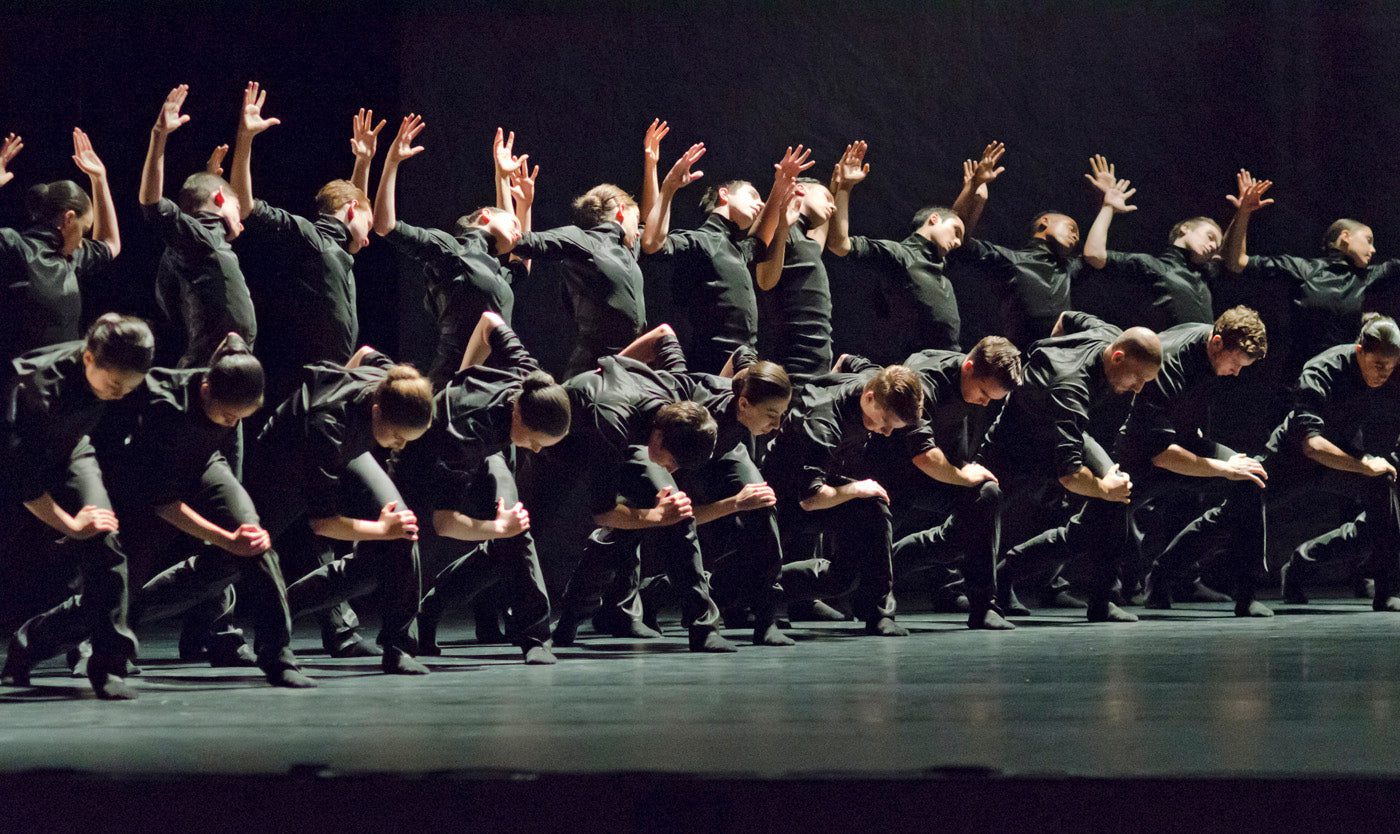 Though it lags somewhat in the middle, this four-part bill is robust and stimulating. The intricate music of London-based contemporary composer Thomas Adès unites the pieces, each of which features the musician conducting from the pit or tickling the ivories on stage. Adès’ participation in the programme elevates it greatly, breathing life into his already vigorous notes so that they form an integral and unforgettable element of the performance.

First up is Wayne McGregor’s “Outlier,” a finicky, breakneck work in which the dancers—nine agile members of Random Dance—explore what the choreographer calls the “physical outliers” of movement: unnatural and inorganic shapes, poses and manoeuvres. The dancers pursue a blaze of balletic anomalies that would make a purist wince, sickling their feet and deliberately throwing themselves off balance; still, the poise and posture of their classical foundation remains visible. In typical McGregor fashion, the piece contains several helter-skelter moments in which everyone on stage is performing a different strand of convoluted choreography at the same time. Like the high-velocity violin concerto (played with finesse and supreme expertise by Thomas Gould) spurring them on, it’s fast and chaotic—sometimes overly so. The gymnastic partnering has a particularly manic, borderline-violent edge (a moment in which two men drag Fukiko Takase along and fling her into a split between their shoulders springs to mind).

“Outlier” shines brightest in its second phrase, which has some quiet moments in which the dancers abandon their wild pace and explore the aforementioned outliers in a more measured fashion. It appears to revive them: when the group revs back up for the final segment, another speedy one, the sense of chaos dissipates, and the complex movement vocabulary takes on a more polished feel.

Karole Armitage’s “Life Story” contrasts sharply in its set-up. Here a half-dressed man and woman (Ruka Hatua-Saar and Emily Wagner) tussle about the bedroom while a slinky-suited soprano (Claire Booth), accompanied by Adès on the piano, warbles out the like-titled poem by Tennessee Williams. The duet is sensual, though it’s less a romantic serenade than a love-drunk skirmish: the dancers intermittently caress one another and vie for domination. There’s a rich coyness to the way Wagnertugs away from Hatua-Saar and then flings herself back at him, and Booth’s throaty voice spurs on the overall atmosphere of intimacy.

Still, the performance lacks the fire and tension Williams’ words demand. Individually Wagner and Hatua-Saar are alluring dancers, but their chemistry together fails to zing convincingly: both offer more athleticism than vulnerability. It’s fun nevertheless, especially when the dancers sync with the music, slumping when Booth emits one of her many dramatic sighs and panting loudly when she drawls on about the “audible breath” of lovers connecting for the first time.

Alexander Whitley’s “Grit in the Oyster,” set to Adès’ Piano Quintet, takes the form of a one-man, two-woman trio (comprised of Whitley himself, plus Antonette Dayrit and Jessica Andrenacci) about harmony in the face of discord. A small onstage orchestra—five strings and one pianist—accompanies the dancers, adding a compelling layer to the dynamic score. It’s a real treat to watch the musicians take so fiercely to their instruments, harnessing even the trickiest notes with a deft swipe of their bows.

The music ebbs and flows in intensity, but the dancing retains an even, gentle quality throughout: there’s a lot of stretching through softly curved shapes, and the dancers frequently arrange themselves into round-edged tableaux, including one that winds its way across the stage over several minutes. The steady pace is such that the piece starts to feel a little long towards the end, but there’s a lot to praise about the partnering, which is delicate but never frail. Antonette Dayrit stands out in particular for her alert, forward-facing deportment: it goes a long way in animating the unassuming choreography.

Crystal Pite’s electric “Polaris” comes as a jolt after the mildness of “Grit,” its energy ripping through the auditorium like an electric current. The piece (perhaps better described as a production) features 64 dancers who crawl and slice their way through a rich, layered piano concerto. There’s a martial arts vibe to the choreography—think running, swooping, slashing—and a restive edge to the music; together these elements elevate the work from mere performance to spectacle.

The drama of the piece’s formations is its biggest strength: the cast starts off in a stationary clump, then morphs into a wriggling, travelling constellation that disperses and crashes across the stage like a tidal wave made of bodies. At one memorable point the dancers form a line and ripple as if a spark is charging through them; at another they drop to their knees, foreheads pressed to the floor, and flutter their arms in a complex but seemingly random design. The majority of the piece features all 64 dancers performing at once, and it’s a testament to the precision of Pite’s choreography that the stage feels busy, certainly, but never cluttered. It’s a show-stopping finale, and an excellent piece, full stop.