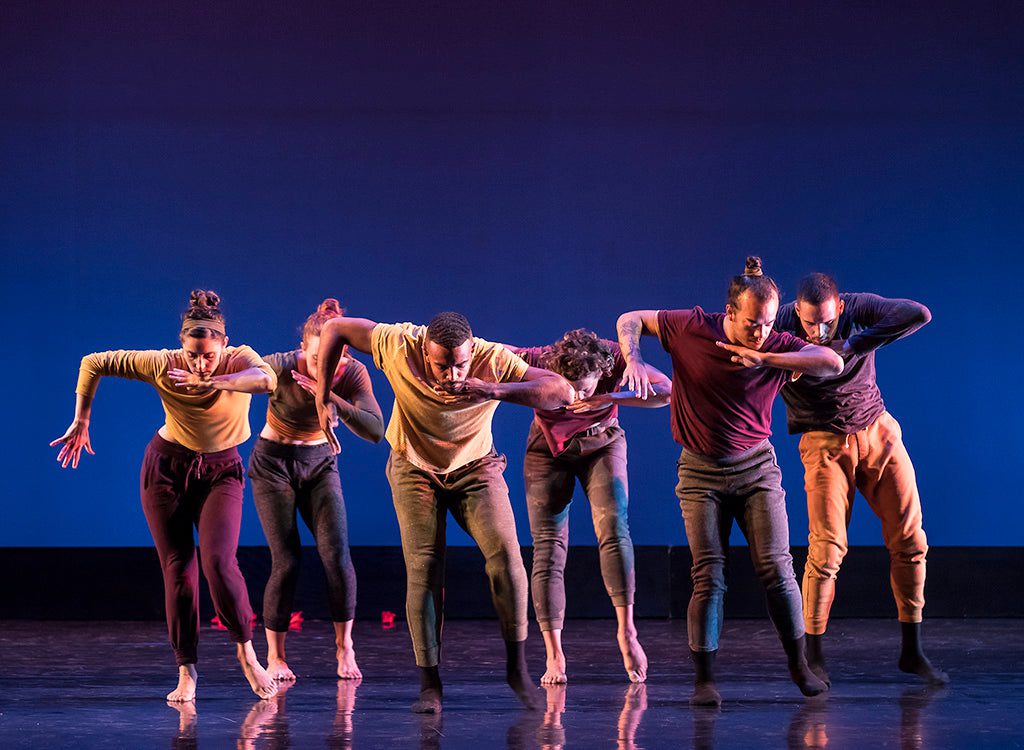 DANCEworks, a month-long residency at the Lobero Theatre in Santa Barbara, has been attracting big-name choreographers for the past decade. It’s easy to see why—where else can you create in a uniquely supportive environment, in a fully-equipped theatre, by the sea? The residency culminates with a performance of the work-in-progress, and many of these works have gone on tour across the U.S. and internationally. This year marks DANCEworks’ tenth anniversary, and artistic director Dianne Vapnek has every reason to celebrate.

The celebrations included a performance by this year’s resident choreographer, Doug Elkins (his second time at DANCEworks), as well as solo performances by a decorated DANCEworks alumni. Vapnek said, beaming, “I didn’t think they would all come back—and yet here they all are.”

“Kintsugi,” Doug Elkins’ piece for five dancers, takes its name from the Japanese art of repairing broken ceramics with lacquer mixed with precious metals. A courteous, ceremonial step on demi-plié cued the Japanese theme, continued with the playful use of red fans, snapped open in Samurai-like strikes, or used to veil a tender moment. Elkins’ garage-band approach went further, too, riffing on samba and bachata steps, drawing on the cultures of his (outstanding) dancers.

Adding intrigue was the soundtrack; a mashup of songs and samples, from Nina Simone to the live recording of the Beach Boys’ album Pet Sounds, featuring the opening track, “Wouldn’t It Be Nice.” The company moved through these shifting soundscapes in a rotation of duets, solos and ensemble sections. If the solos showed vulnerability, the crack in the porcelain, together they were golden, moving jubilantly with rolling hips and foot-taps. Dressed casually in hues of terracotta, grey and yellow, together with lighting in sunset-pink and twilight-blue, Elkins’ “Kintsugi,” via Japan, and elsewhere, was also infused with the colours of Santa Barbara.

The solo-portion of the evening was emceed by Larry Keigwin, twice resident at DANCEworks in 2010 and 2013. He referred to the solos as signatures, not only of each of the choreographers, but also of the curator, Dianne Vapnek. I’m sure each in the audience drew their own through lines, but for me, they seemed to give equal weight to head, heart and humour.

Adam Barruch opened with a visceral performance of “The Worst Pies in London” from Stephen Sondheim’s “Sweeney Todd: The Demon Barber of Fleet Street.” Accompanied by live piano onstage, Barruch gave a punchy rendition of the song while performing his rubber-limbed interpretation of the grisly lyrics. Barruch created “The Worst Pies in London” during his 2015 residency at the Lobero, and is currently developing an evening-length dance theatre production of the acclaimed musical.

Keigwin took the stage next, dancing a warm and entertaining solo entitled “Ballad #1,” set to Rodgers and Hammerstein’s “Something Wonderful” sung by Peggy Lee. Dressed in basic black, Keigwin charmingly played up the theme of a loveable yet flawed man, with wide circling arms and witty gestures. Was that grand jeté the “something wonderful” Lee was crooning about? Yes, we think it was.

He jogged back on stage a minute later to breathlessly announce Mark Dendy, performing “Rumsfeld.” Ingeniously choreographed, Dendy, in military garb with a gas mask covering his face (costume by Stephen Donovan), superbly mimed to the recording of an interview with former Secretary of Defence Donald Rumsfeld describing a backstage encounter with Elvis Presley. Dendy built up an intricate pattern of rhythmic, satirical gestures that erupted into full corporeal flailing as the story unfolded. Dendy, a known provacateur, did not disappoint; his sharp commentary was on target, as ever.

Moving into the ‘pure dance’ realm, Kate Weare choreographed a solo for Kate Weare Company dancer Nicole Vaughan–Diaz especially for the occasion. Aptly named “Praise,” the solo was set to Harry Partch’s Eastern-sounding, “Two Studies on Ancient Greek Scales” played by the Kronos Quartet. A sure-footed Vaughan–Diaz, in a midnight blue dress moved as though a statue come to life, with sustained grace. I was particularly taken with Weare’s refined musicality; “Praise” lingered, just like kind words spoken.

Doug Varone next danced a minimal, enthralling solo, “Nocturne.” A single downlight on a dark stage lit Varone, dressed in black, catching the chiaroscuro of Chopin’s Nocturne in E minor. Varone’s soft, quick movements gave a liminal sense of approaching, but whatever it was disappearing, out of reach. A three-time guest of SummerDance Santa Barbara, Varone returns to the Lobero Theatre as DANCEworks’ resident choreographer in 2019.

A change of pace came with Shannon Gillen’s solo, “ColourVision” performed by the talented Jason Cianciulli of Gillen’s troupe, Vim Vigor. “ColourVision” premiered at the Julliard School in New York earlier in the year, and dives into the spun-out world of Led Zeppelin’s “Superbloom.” Cianciulli thrashes convincingly with the microphone, getting tangled in the cord via cathartic jumps and spills. When Gillen attended the residency in 2016, she filled the stage with rubberbark to aid the hyperphysical, energetic mode of her dances. Vim, vigor, absolutely.

Aszure Barton was DANCEworks’ first choreographer-in-residence, in 2009. Out of that residency came “Busk,” and the rest is history. The solo from Barton’s 2012 work, “Awáa” danced with utmost control by William Briscoe, has an inverted appeal, antagonizing the music by Lev “Ljova” Zhurbin with its meticulous, slow progression. From trembling, broken steps, finally Briscoe steadies to comes forth to the edge of the stage, in filtered light, and that is all, and that is enough.

Picture it: you come home from work, you loosen your tie. You sit down on a chair to take off your shoes and socks, exhausted. But then a tune comes into your head, and you start to move, almost despite yourself … Brian Brooks gives us this relatable scenario in his 2007 solo, “I’m Going to Explode.” Set to LCD Soundsystem’s anthemic “Losing my Edge,” what starts as a simple tick-tock of the arms escalates, and Brooks gets loose, torquing and twisting and laying into the space.

It sums up what we have seen in each performance; an irrepressible burst of creative energy, the restorative ‘something wonderful’ that is dance, that is DANCEworks.

Next
Breaking out of the box