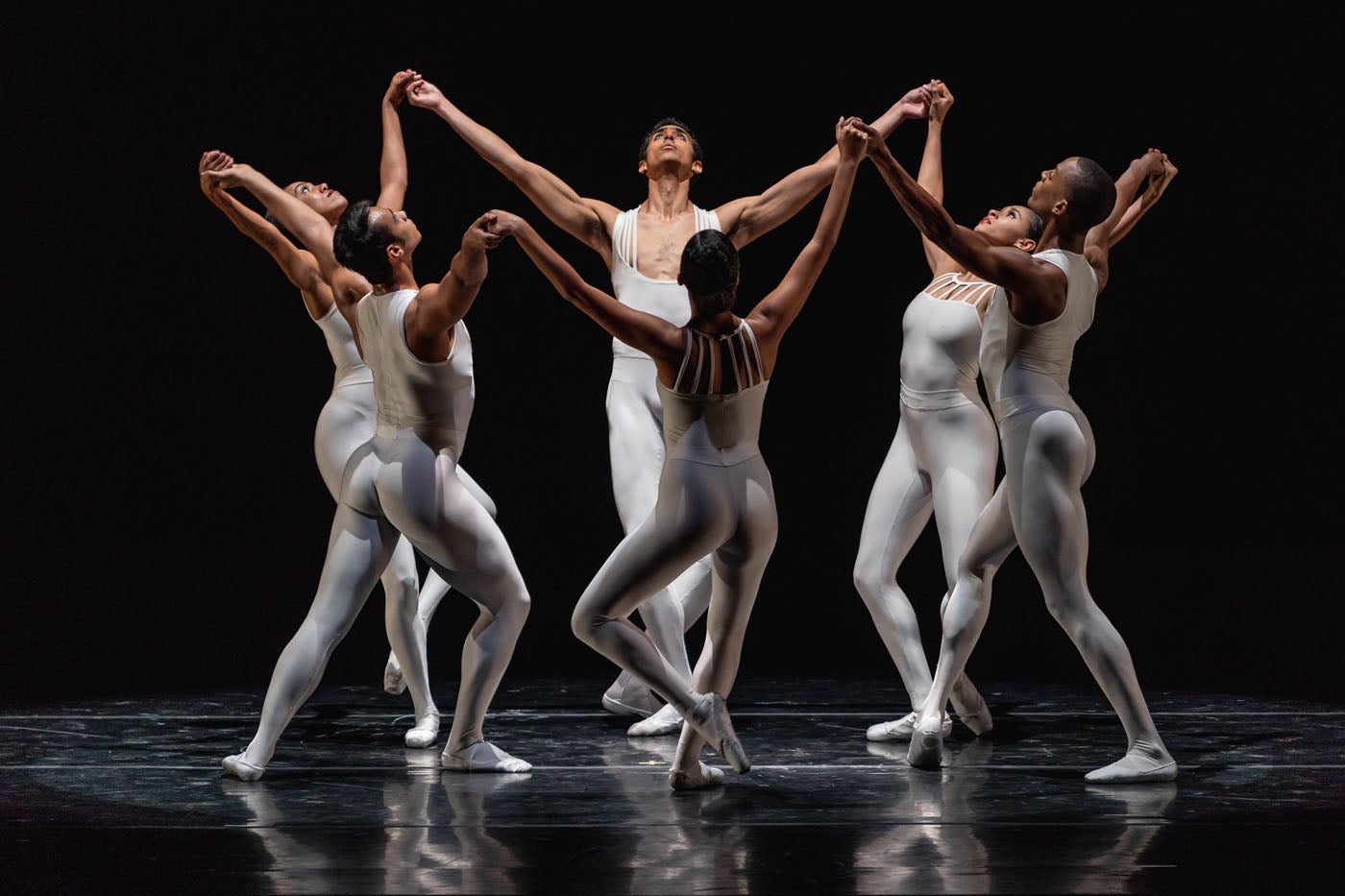 There are angels on earth, and they are the dancers, choreographers, composers and artistic directors who help collectively elevate the hearts and minds of concert-going mortals-if only for a brief respite—especially in these very troubled times. To be more specific: Dance Theatre of Harlem, under the assured and loving hands of Virginia Johnson, made a triumphant debut at the Broad Stage in a program of three disparate—and emotionally charged—works.

That the troupe, which was founded in 1969 by Arthur Mitchell and Karel Shook, only to close for eight years in 2004 due to serious financial difficulties, was given new life when Johnson, a founding member of DTH and star ballerina for 28 years, became artistic director in 2013. The country’s first African-American ballet company, which, at its height numbered 44 dancers and now features 16 members, looked gorgeous, not only in its diversity—but also in its technique and execution.

The terpsichorean angels were most prominent in Ulysses Dove’s 1993, “Dancing on the Front Porch of Heaven,” a work that Dove originally choreographed for the Royal Swedish Ballet and is subtitled “Odes to Love and Loss.” Having lost a number of friends and relatives at that time, Dove, who would himself die from AIDS in 1996 at age 49, set his work to the melancholy chimes and strings of Arvo Pärt’s 1977, “Cantus in Memoriam Benjamin Britten.”

The Estonian’s holy minimalist music was wedded to Dove’s choreography that featured three couples in a series of both fractured and fluid relationships. Illuminated in a string of white spotlights (originally lighting by Björn Nilsson; recreated by Peter D. Leonard), and clad in Jorge Gallardo’s white unitards, the dancers—Lindsey Croop, Alison Stroming, Alicia Mae Holloway, Dylan Santos, Jorge Andrés Villarini and Anthony Santos—conveyed a sense of ineffable grief, with faith and resilience also embedded in their moves.

Beginning in a circle holding uplifted hands, the performers repeatedly returned to this motif—for comfort and a kind of cathartic release in the four-part opus where agony and ecstasy also co-existed in the unsettled strings of the score. Push-pull partnering featured arched backs, deep pliés and hands in prayer position; the dancers attacked their steps with an articulated ferocity that embodied heartache’s mournful hold and, in jumps, slo-mo walking and beseeching arms, their desperate attempts to stave it away was the perfect counterpoint. Heads bowed and walking towards the abyss, the dancers did Dove proud in this testament to the human soul.

In Darrell Grand Moultrie’s “Vessels,” originally made for the company in 2014, the 10 performers reveled in speed, ebullience and precision. Set to Ezio Bosso’s minimalist music (a far cry, however, from the works of Glass or Reich), the work nevertheless proved a showcase for spiritedness, wit and breezy determination. Wearing coral-colored, gold accented Egyptian-esque costumes by George Hudacko, the dancers zoomed through a number of entrances and exits, fleet unisons and quarter turns and lunges. Throw in some entrechats, knee-walking and twirls, and “Vessels” is a recipe cooked to near perfection, with Ingrid Silva displaying effortless grace in her leaps, and the pairing of Crystal Serrano and Villarini a study in ardor.

The program opened with “Brahms Variations,” created in 2016 by Robert Garland, DTH’s resident choreographer. Neo-Balanchinean—no surprise here, as Arthur Mitchell had been an acclaimed New York City Ballet principal—the piece was inspired by Louis XIV, the so-called grandfather of ballet and mixed with “Harlem Swag,” meaning this was decidedly not the French king’s hip-swiveling of yore.

As five couples comported themselves with ease while at the same time bowing and displaying genteel pageantry, the dancers had ample opportunity to shine, a certain nobility seeming to course through their nimble bodies. The lead couple, Serrano and Da’von Doane, looked ravishing, their moves buoyant and free, while former Los Angeles Ballet dancer, Christopher McDaniel, assuredly partnering Yinet Fernandez, beamed with pride.

From the intricate footwork to unison bourrées and fine corps work, this was dancing at its freshest, the swooping arms and uptown dips adding a bit of pizzazz to the cast that also included Amanda Smith, Donald Nguyen Davison, Dylan Santos, Silva, Rose and Holloway.

The program note to “Vessels” said, “Let us all be infused with something beautiful that can be transferred to others.” And so it was throughout the evening, as Dance Theatre of Harlem showed its mettle in wide-ranging ways, from movements enveloped in profound sadness to bodies expressing unbridled joy.

Adding to a weekend of formidable African-American dance in Los Angeles, the storied Alvin Ailey American Dance Theater, under the artistic direction of Robert Battle, and the electrifying Complexions Contemporary Ballet, co-founded by Desmond Richardson and Dwight Rhoden, also rocked the house at Orange County’s Segerstrom Center for the Arts, and the Dorothy Chandler Pavilion, respectively, where sold-out crowds were treated to top-tier dancing and choreography. Indeed, with the eternally young Richardson, 49, exploding onto the stage for a jaw-dropping solo in “Bach 25” (choreographed by Rhoden), and the 16-member troupe performing its Rhoden-created homage to David Bowie, “StarDust” (hello, Broadway?), angels most certainly abounded, giving audiences much-needed jolts of hope, inspiration and gratitude.