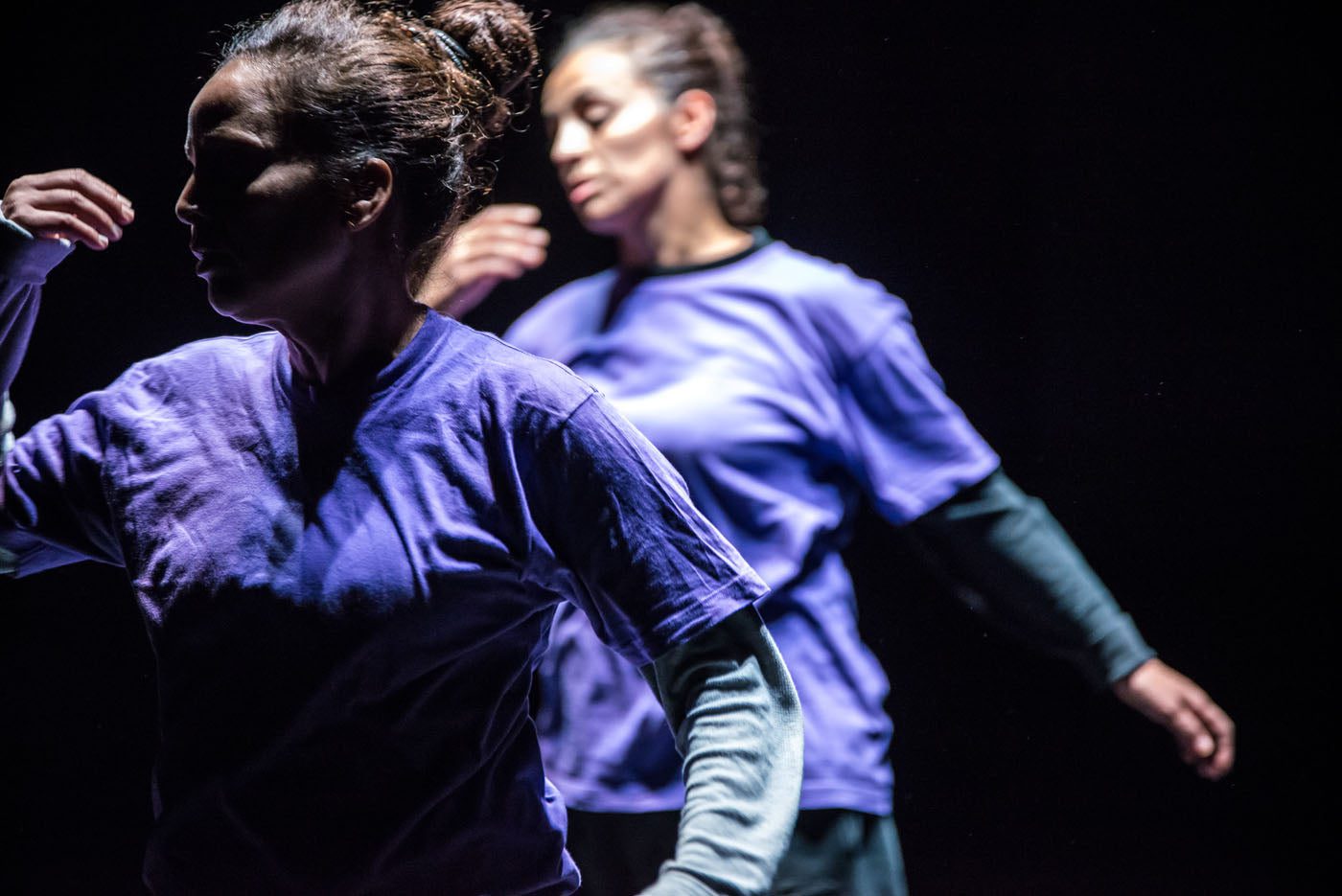 The noise of the day drops away as I make my way to the upstairs studio of Dancehouse. I am one part of an increasingly hushed procession assembled on opening night to experience Sarah-Jane Norman’s “The River’s Children” (2013), and “Take This, For It Is My Body” (2010) paired with “Heirloom” (2013), and Nacera Belaza’s “The Shout” (2008), presented as part of Melbourne Festival.

Reaching the small landing, I peel away from the line. I remove from my bag a small pair of folded sports socks and hand them to the usher. With an air of quiet solemnity, she pins my socks together with a clear tag. My socks are marked laundry item number two, and I log the particulars of my white laundry on a form pegged to a clipboard. In this context, my washing looks limp and exposed. Beside me, a man hands over an equally unassuming, soft t-shirt. These items, my socks, and his t-shirt, are two of a handful that will be washed in water drawn from the Murray River on Wiradjuri country at Albury with permission of the Albury Aboriginal Lands Council. The usher gently informs me to hand my washing to Norman when I feel comfortable.

And so I enter the darkened landscape of “The River’s Children” with a pair of socks in my hands; a pair of socks that I can, if I choose, hand over for someone else to wash. In the short distance from the landing to the studio, my limp and humble socks have transformed in status; I am master and Norman my servant, and this is as uncomfortable, possessive and confronting as it sounds.

An open invitation to bring along a white article of clothing had been issued earlier. In not wanting to refuse an invitation to assist a performance, and with a desire to take part too, I had looked in vain for something white that I could bring. A white handkerchief: too white flag surrender. A bra: too intimate. A beloved band t-shirt: what if I don’t get it back? In the end, I purchased a pair of socks in a department store en route to the performance. I removed their label, scrunched them a little, before smoothing them out, and now, in my hands, they burned and rendered me guilty, twofold; in my hands, a pair of socks that did not even need to be washed. False, clean items; and yet moments before they’d been so small and harmless. Handing them to Norman, I tried to pick a moment in keeping with their* working rhythm. Our actions have meanings, and I feel the guilt of history.

As my already-clean socks are thoroughly scrubbed, I feel ashamed for Norman’s needless labour. Birdsong may chime in the air, but the scene is anything but pleasant. I feel like a character from the Victorian era with someone to do my chores. Exploitative. Tainted. Playing along, unquestioningly. I don’t want to be this character. I don’t want this to be my past. But my colonial past it inescapably is, my future too. Projected at either end of the studio, “the names, dates, and locations of every documented massacre of Aboriginal people in Australia’s colonial history.”1 Coniston, 14th of August–18th of October, 1928; Pinjarra, 1834; Waterloo Creek, the Australia Day Massacre of 1838, also known as Slaughterhouse Creek; Myall Creek, 10th of June, 1838; Gippsland 1800-1860. The list goes on. Uncompromising. Unsettling. Raw. Projected upon the items of clothing hung out to dry. And all I can do is sit on the sidelines, watching as “the personal [collapses] into the political, exploring the embodied legacy of colonial violence.”2

To sit on the sidelines, literally on the ground, propped up against the wall, is, of course, the very least I can do. And later, as people file downstairs, while Norman remains washing ‘their’ clothes, doing ‘their’ chores, I will wince at how far we still have to go; how little we have done; how accountable every single one of us is, be it through association or disregard. A durational performance made a Victorian parlour of the foyer in much the same way as my socks took on a new weight. The grim sounds of interval drinks begun early bubbled up and Norman shook out a rinsed shirt and kept working.

Indeed, as I make my way to the small room for the afternoon tea ritual of “Take This, For It Is My Body” (presented with a sideboard installation of willow pattern plates drawn using the artist’s own blood, “Heirloom”), the joint sting of leaving someone to toil for your own benefit and ‘walking out’ on a performance that is ongoing. Staged at 10-minute intervals, this afternoon tea recalls early days of settlement. Along with six others, I am led into an airless room, close and oppressive. In the far corner, scones have been made and tea boils. The mess of the active kitchen, once more for my benefit, is a marked difference to the formal table setting. The usher motions for us to take our places of entitlement, and we do. To my left sits a woman who earlier in the evening I had waited at the traffic lights with. Little did I know then that we’d end up awkwardly side by side at a tea party.

From the shadows, dressed only in a slip, the mute ‘help’ emerges and pours tea. The stifling heat and the position I have been placed in, as someone who needs to be waited on, makes me increasingly uneasy. I accept the tea and mouth the words ‘thank you’ for the cat has got my tongue. Without a performers’ lead to follow, I am unsure if we are meant to talk amongst ourselves or remain silent. With the performer, in this instance, Carly Sheppard, in the role of servant, I have only my own conscience to to tell me what to do. And my own conscience feels weighted to a stone at the bottom of the river. We are all responsible.

Blurring the lines between performance art and real life further adds to my confusion. Is it rude to talk during a performance? Is it impolite to refuse what has been offered to you when someone has worked so hard? Upon a small typed card before me reads the story of Grandma’s hands worked to the bone so much so that blood mixed into the scone dough, and of being forced into Catholicism. Forced labour. Forced religion. And so, out of politeness, I drink the bitter tea I don’t normally drink, and leave the scone tinged pink with the blood of an Aboriginal woman because I do not want to be a part of the suffering of one for the pleasure of another. Hedging my bets, I realise there was no ‘right’ choice I could have made, and I carry the acrid taste of tea with me to Belaza’s sacred ritual, “The Shout.” Inaction will not shake off the wrongs of the past. This is not about my displeasure for one evening, but ultimately about generational trauma of Aboriginal people.

A duet performed with her sister, Dailila Belaza, concludes this year’s “Dance Territories: Border Lines.” It is a movement meditation that builds to a beautiful roaring blur. Utterly hypnotic and powerful, I cannot tell if the stage is becoming brighter or if I can see more as my eyes adjust to the darkness. Captivated by their swaying forms, linked through shared gesture, I cannot tell if I am moving too. Surely, my head is, isn’t it? And as freedom is found within the body as repetition grows, surely that transmitted to each and every person in the theatre?**

To paraphrase Belaza, there is a “feeling of emergency, or necessity…. And I need to feel that every time I do a piece. When I reach this place, I feel like I probably did something useful.” Yes, what was buried within the body was heard loud and clear, and the whole theatre appeared to spin. Pared back to the essential, all is clear.

Falling within the body, looking outward, with eyes wide open, the intensity of the third edition of Dance Territories will long be felt as more than a trace element on my skin.

* Norman requests that non-binary pronouns be used in reference to their work.
** Perhaps with the exception of the three people in front of me who repeatedly checked their messages on their iPhones. Their bright screens crashed into the darkness and threatened to pull me from my trance-by-proxy.

Previous
On the Hour

Next
The Food of Love