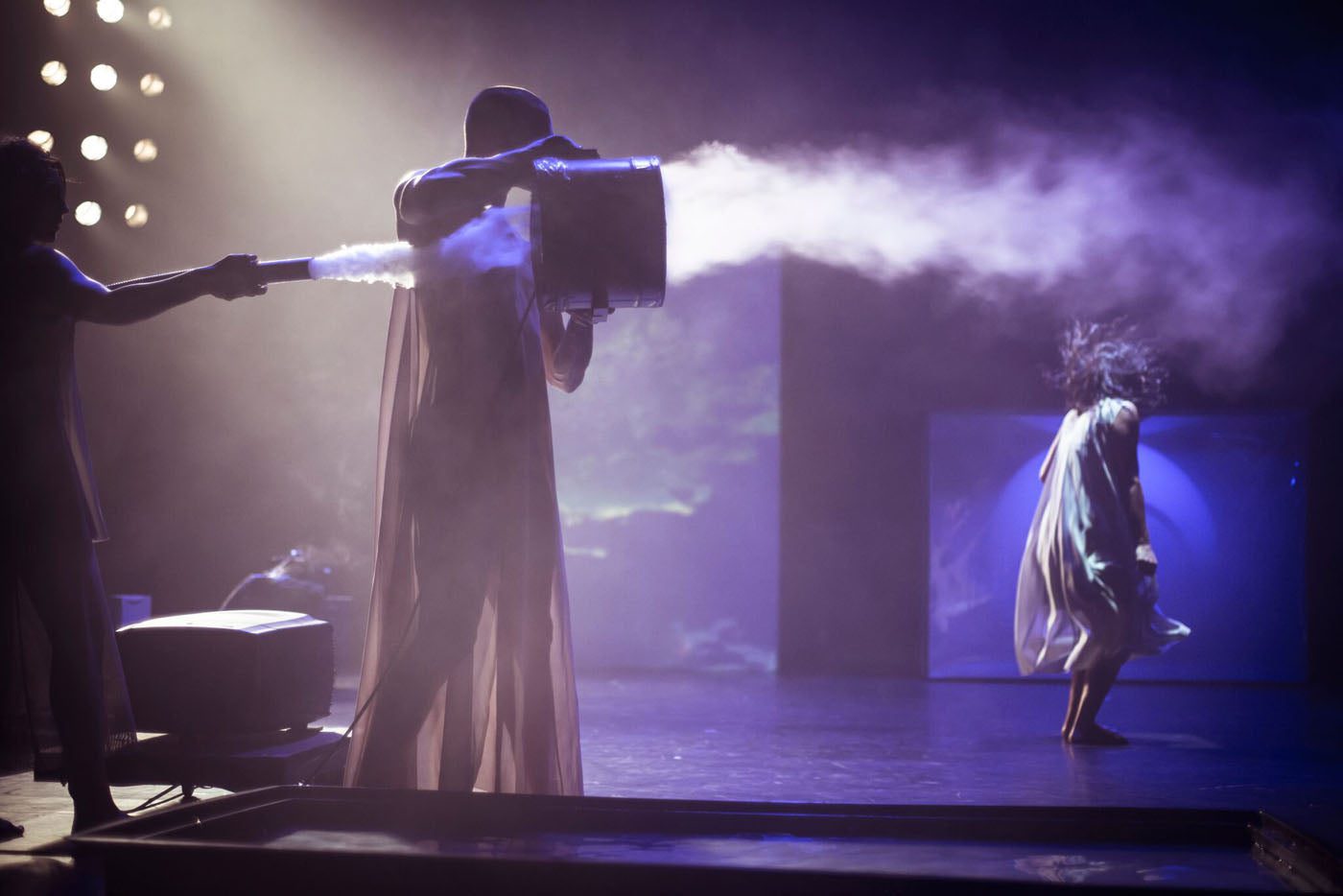 The Bureau of Meteorology La Trobe St. Weather Station, near to the Carlton Gardens, has always intrigued me. A triangular wedge of fenced-off green on the city’s fringe, it looks like an art installation or a performance space. With a tiny garden shed, and unfamiliar equipment to measure climatic changes and patterns neatly dotted and connected by pathways, it is not so unlike the world Chunky Move’s Anouk van Dijk and Singaporean artist and filmmaker, Ho Tzu Nyen, have set up for their collaborative work, “Anti-Gravity.”

Presented as part of the Asia Pacific Triennial of Performing Arts and Dance Massive 2017, the stage is an ordered maze of forms that are familiar but whose role is ambiguous. The business of forecasting sounds and looks poetic, but it is serious stuff. Wind measurements, temperature, humidity, and precipitation are all recorded by tiny, unassuming sculptures that appear in need only of an artists’ statement. Working with clouds has the air of romance, to me, and in literature, dance, and art too, but I suspect that it is the data not the tools and their subjects that must interest those who chart meteorological quantities.

As such, it is not surprising to see a latex weather balloon in the Merlyn Theatre at the Malthouse, nor to note a compressed personnel lift suitable for facilities maintenance. A weather balloon enabled Alfred Wegener to discover his continental drift theory in 1912, and now, in 2017, it enables Chunky Move to create a work that operates like a cloud, or at least how one might perceive a cloud to operate. Such high altitude stage props! Such scope for symbolism. Correggio, Turner, Léger, da Vinci et al., have all fallen under spell of clouds, stormy, fluffy, or otherwise. And the pictorial space within a painting and a stage is not so very different.

That Ho Tzu Nyen looked to Hubert Damisch’s A Theory of Cloud: Towards a History of Painting as inspiration and research for this work is keenly felt. To the right, Luigi Vescio is Titan’s Sisyphus (1548–49), uprooted from the Museo del Prado for Dance Massive. Classical mythology continues in the foreground with James Batchelor as Caravaggio’s Narcissus beholden by his reflected image. Where the 16th century painting gave us a pond, this year’s version is a shallow black rectangular trough, one part photographic lab to one part meteorologists’ means. In the painting, the reflection and the figure make a complete circle. In the theatre, from where I sit in the front row of the stalls (a hair’s breadth from the water’s edge), a mirrored panel continues the effect. There is a sense of being drawn to, of falling in, diving below the surface, almost like a cartoon characters’ black circle that is actually an escape tunnel to another world. And this other world, below, does that mean we are in the clouds? Yes, quite possibly.

This work feels not unlike being able to open the door on an aeroplane mid-flight. The magical, otherworldly view gleaned out the window makes the clouds look like a floor capable of supporting one’s own weight. But in actual fact, open the cabin door mid-passage, and you would find you couldn’t walk on the cloud floor. You’d fall right though, that’s gravity for you.

In this suspenseful, eerie, and beautiful atmosphere, there is introspection characteristic of Narcissus. There is also an invitation to lie on the grass, look upwards, and watch the picture-perfect and ever-changing cumuli that so wooed Constable and Jacob van Ruisdael. Clouds as a canvas, constantly shifting, altering one’s perception of space: roll on. Through the dancers’ sustained positions and the manner in which props, such as mirrored paper on the roll, are studied, Brunelleschi and his gravity-defying dome construction and El Greco and his spiritual dramatizations, like View of Toledo (1597), are called forth. And though there is much stillness, they are often all called forth simultaneously. Like the components of the weather station, as Batchelor dips his left hand into the water, Sarah Ronnie Bruce experiments with the sound her microphone makes as it meets a hard surface, and Tara Jade Samaya scales a speaker, pulling her form up as if the laws of gravity do not apply to her.

On the stage, nature has come indoors in the form of rocks, fake lawn, and projected cloud imagery. It simulates our link with nature like a cloudscape within a painting that lets us experience what walking on clouds, weightless, might feel like. There are conjuring tricks in the sense of a screen that masks a supporting leg and lets Batchelor appear to float untethered in the sky, à la Superman or a da Vinci model muse. Earlier the duet between Niharika Senapati and Marlo Benjamin makes curious play of the screen’s transparency, as one reflects the moves of the other, like a mirror.

Between permanence and impermanence, hard and soft, loud and quiet, fast and slow, this work rests, cloud-like. When Damisch wrote of “bodies entwined in clouds defy[-ing] the laws of gravity and likewise the principles of linear perspective…. they lend themselves to the most arbitrary of positions, to foreshortenings, deformations, divisions, magnifications, and fanciful nonsense”1 he could have been talking about “Anti-Gravity,” about the linked dancers akin to figures circling a Grecian vase in hypnotic trance-like abandon. However, for me, the visuals I will store within my painting of a philosophical dream are those of stillness and small movement; of those final perfect moments, when the dancers became their own measuring devises. It was in the still moments that the props were more than props, they were an extension. Returning to the beginning, when Samaya waited like an all-knowing and powerful warrior in half-kneeling position as the theatre filled, such meditative moments speak volumes.

Duality is one thing that binds “Anti-Gravity” to Lucy Guerin’s “Split” and Nat Cursio’s “Tiny Slopes,” two works also seen at Dance Massive, at the North Melbourne Town Hall and Meat Market respectively. But even more than this notion of two sides of a whole, strength, female strength in particular, is the common thread. In “Split,” the two performers segment the performance space, one strip of tape at a time, but they are in unison, depicting the many facets of one person, or, rather, one woman. In “Tiny Slopes,” seen as a work in progress at Dance Massive 2015, the four young performers on their skateboards carve out the theatre space as their own, the embodiment of strong female potential. They are hope for things to come, and voices heard, and also reminiscent of all the best parts of one’s childhood when your friends were your world and everything felt possible. Waxing further nostalgic, the four skaters, Rae Franco, Amelie Mansfield, Pyper Prosen, and Pixel Willison-Allen are almost the ‘before’ of “Split’s” Melanie Lane and Lilian Steiner. For the four skaters, risk still comes with an inbuilt pair of kneepads, gloves, and helmet. In “Split,” we are running out of time and space, literally.

Time and space is not all that is fractured, Guerin “also wanted to disrupt the harmony between the two dancers. We tried different costumes but that didn’t seem to read clearly. Having one naked and the other clothed created a split in identity that intensified the piece. For me it gives seriousness and normality to the female body, which is such a site of commodification, exploitation, shame and shock. I feel very sad sometimes about the never-ending ways in which women must conform to a ridiculous ideal. In “Split” it is what the body does as much as what it is that is important.”2

And what the vulnerable/resilient body does! Lane and Steiner are the embodiment of both of these traits, in turn and at the one time. Burrowing, pouncing, flexing, balancing, pushing and pulling, utterly genuine, relatable, and strong. On second thoughts, perhaps they are not the ‘after’ of the younger cast of “Tiny Slopes,” for they are not without hope. They are merely speaking in their own language, revealing their bruises, and they are mesmerising in their control. Strength does not come from the armour of clothes. It is bigger than that.

To me, all of these new works addressed what is possible when we remove the weight of limitations we either place upon ourselves or have placed upon us. When we persist and take risks, “trying to learn to use [a new language], and every attempt is a wholly new start, and [open to] a different kind of failure” is where things get interesting. “And so each venture is a new beginning;”3 walking on clouds, ever changing.