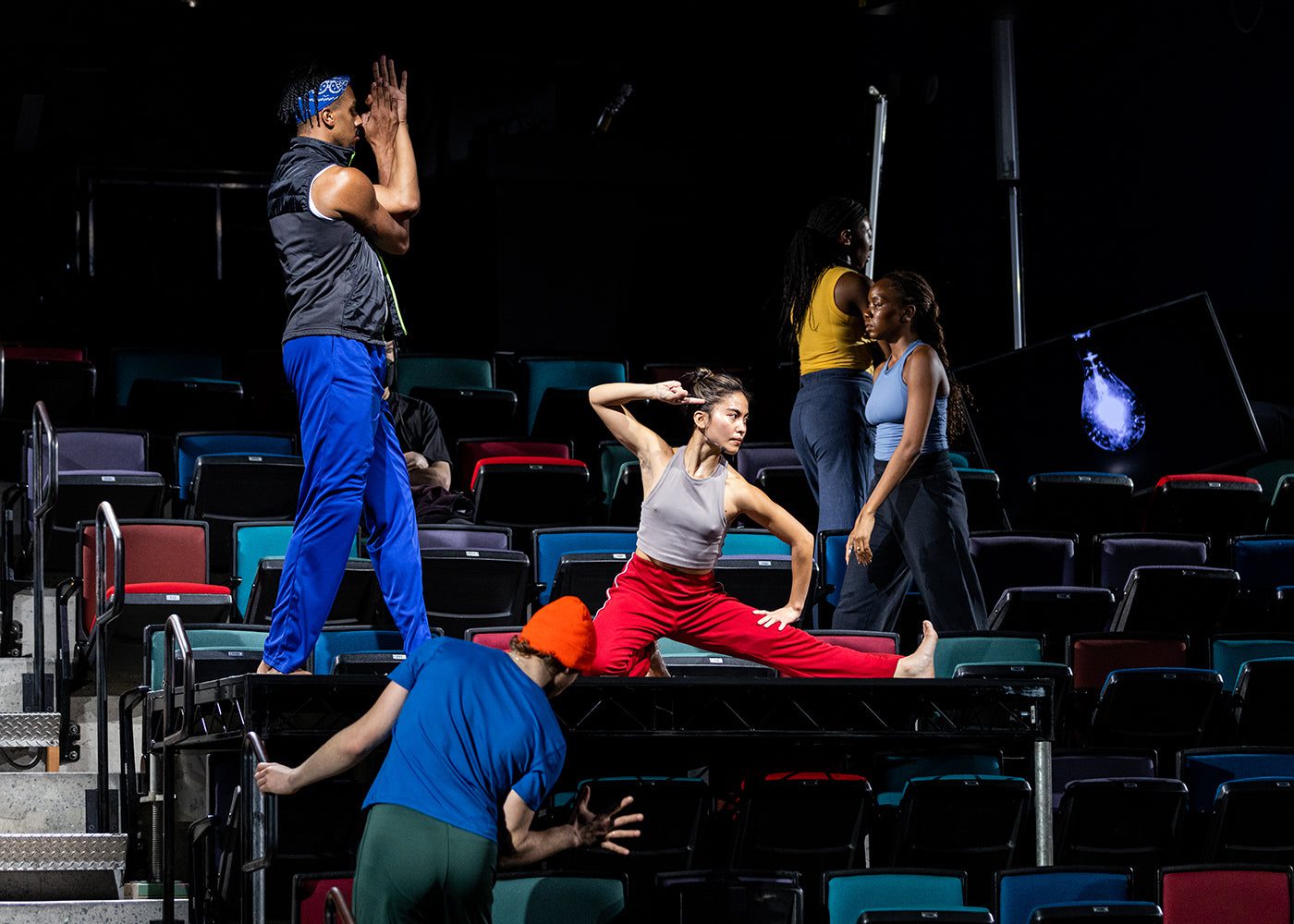 “Call it culture.” This short phrase acted as the backbone of “Curriculum II,” a new work from the Bill T. Jones/Arnie Zane Company. Uttered as a satirical refrain or in bold type, floating in the numerous screens as a reprimand, this barb reappeared continually like so many tiny vertebrates supporting the structure of a complex and at times, unwieldy, composition.

Conceived and directed by Bill T. Jones, with choreography by Jones along with Janet Wong and the company, this text-heavy multimedia production was set in the round at New York Live Arts. Each section of seats boasted a different view of Liz Prince’s creepy installation—including a cluster of hanging picaninny dolls and rope nooses that lurked around the edges of the theater like threats—and came with its own close encounters with the artists.

Emerging out of seats in the audience, the ten performers light up the stage with the flashes of their phones. They gather into a tableau where their bodies face out to us, but all focus is placed on their devices.

They return to their seats as Marie Lloyd Paspe begins to orbit the stage while singing Jonathan King’s “Everyone’s Gone to the Moon.” Video design by Wong shows us the moon on four screens mounted over center stage as in an arena; a galaxy of twinkling planets and stars expands on several screens installed in the stadium seating at the back of the theater.

Long time ago, life had begun

Everyone went to the sun

Streets full of people, all alone

A church full of singing, out of tune

Everyone’s gone to the moon

But soon, Paspe’s lovely singing gives way to a disembodied voice reading from what sounds like a Bible verse (the program notes text adapted from several sources including Louis Chude Sokei’s The Sound of Culture: Diaspora and Black Technopoetics; Mark O’Connell’s “Uncanny Planet,” from New York Review of Books; William Shakespeare’s “The Tempest;” and Genesis 1:28-31), summoning the ensemble back to the stage. They twirl in place; one arm extended, phone in hand, to capture their absorption in their own universe. Meanwhile God’s voiceover, commanding all “to be fruitful and multiply” has morphed into a propagation of terms defining identity: human, non-human, trans-human, post-human, primitive people, more-than-human. Later these words will run over the screens and LED billboards hovering over the audiences on stage left and right. For now, there is enough to concentrate on with the ensemble breaking into individual phrases of movement that coalesce into a blissful bit of unison dancing. It is a blip in time before they return to the gravitational pull of their phones, but long enough to glimpse the youth and immense talent of this group.

Spinning is one of many conceptual ideas layered throughout this work, utilized both as a dance move that is part of Jones’s formal exploration and movement vocabulary as well as a circular method for incorporating and interrogating the series of cultural fragments comprising the curriculum in question. The substance of these fragments included famous and esoteric texts, conversations, protests, anecdotes, and songs from our collective archive as well as imagery, ranging from calming nature videos like waterfalls to scenes of migrants at a border and solipsistic selfie videos snapped while the dancers were spinning—all of it delivered in short, overlapping loops that came at the audience from all directions. Which meant there were episodes in which I felt almost felt dizzy in my effort to stay open to all the stimuli and other times in which I found myself caught in its web.

This setup enabled reveals and deflections; brought forth identities fluid and evolving.

At 59:43 I notice there is a countdown clock onscreen. Shane Larson grabs a mic and introduces himself as the narrator. He gives us a biography cobbled from the names, job titles, and origins of the various writers from which the text is adapted and describes himself as an “intruder” and “other.” But more importantly, he adds, “you need to picture me as Black.”

From there, Larson and Nayaa Opong chart the dimensions of a square of light, mirroring each other with slow and deliberate moves across the gridded floor. Larson and Opong work in near perfect unison down to small wobbles and wiggles of the head and hands and Robert Wierzel’s lighting design grows larger to accommodate them. All the while Larson’s words rattle in my brain.

A white man assuming multiple Black identities, Larson’s character is here for more than precise dancing and soon he regales us with a tale of cultural original sin: P.T. Barnum’s acquisition of the slave woman Joice Heth in 1835 and his showcasing of her as a curiosity, a story he will return to a few times and one he credits with “the moment American popular culture began.” He will go on to lecture us on the uncanny. His presence is both ridiculous and incisive. And in its own way, also uncanny.*

While the dancing throughout is formal and abstract, it is never fully separate from the juxtaposition of text and media. Danielle Marshall moves with an articulate specificity in a solo while Larson describes the body of Heth, Barnum’s 161-year-old slave woman. After the singing of a Confederate song, Philip Strom exorcises himself in a howling solo, thrusting his hips, arms, and fingers, hurling his fists, and flinging the thin strips of Prince’s revealing and deconstructed American flag costume. In group sections, dancers tap in and out of phrases, literally replacing one another in a kind of physical subtext reinforcing ideas of reproduction, evolution, interconnectedness, and death. Later, in an accumulating phrase this idea turns into more violent yanking and pulling—perhaps an ominous foreshadowing to the playing of white supremacist chanting, “You will not replace us.”

The movement vocabulary is large and dynamic, and by turns measured and explosive. In partnered sections, surprising initiation points and jarring transitions involve flying kicks to the chest, tackles to the ground, and dragging bodies offstage. These rougher antics are complemented with quieter sections, as when a large group of dancers link arms in a complicated tethering that lowers a fellow performer to the ground ever so gently. These moments make me resent when my attention is divided and drawn elsewhere. Likewise, the lovely voices and commanding vocal performances of both Paspe and Jada Jenai are welcome respites.

The fact is, there is no simple way to enjoy the performers dancing and singing at such a high level, bathed as we all are in the good, but mostly bad and ugly snippets from the centuries of culture that led us to this place. Throughout, I can’t help thinking that this kitchen sink approach is an exercise in radical accountability.

With 24 minutes ticking down on the clock, the dancers are now busy painting their bodies, on and off stage; some are visible through the curtained areas behind stage right and left, while another’s progress can be streamed from their phone. Through a miraculous weaving of so many texts, we somehow journey from slaves and monsters to robots and the future. Now silver, green, orange, blue, magenta, multi-patterned and colored, the performers all eventually come to inhabit squares of light. They form two diagonal lines and reconfigure themselves with a different sort of pace and a new kind of groove.

There are so many archives that co-exist with body paint—from the practices of Indigenous peoples all over the world to minstrelsy and yellow face. At first, the body paint seems to categorize and segregate the cast; near the end, when they are all onstage together, it is almost hope-inducing to take them in as one colorful spinning form.

When Larson hands off the mic to Paspe, the clock reverses and moves from counting down to counting up. Like a palindrome or the BC/AD notion of time that the Gregorian calendar has given us, the performers are now moving forward in reverse order. When Paspe returns to sing “Everyone’s Gone to the Moon” again, time feels anything but linear as it unspools and doubles back. They walk the lines of the grid only to find themselves back in the opening tableau, sans phones and physically transformed, eyes now searching the darkness.

*In the world premiere of Yvonne Rainer’s Hellzapoppin’: What About the Bees? last fall at New York Live Arts, there was a similar, if perhaps inverse, use of deflection. Rainer’s work utilized a voice over in which a Black performer, David Thomson, read Rainer’s own remembrances written from the perspective of Apollo Musagétés. I was troubled by what felt like an affect without rigorously thinking through the cringeworthy racial implications. From observing the talkback with Rainer and Jones after the show, it seemed that Jones was also put off with many aspects of how Rainer reckoned with her own racism (or didn’t). This left me wondering if Jones’ complicated narrator was a coincidence or a rebuke.