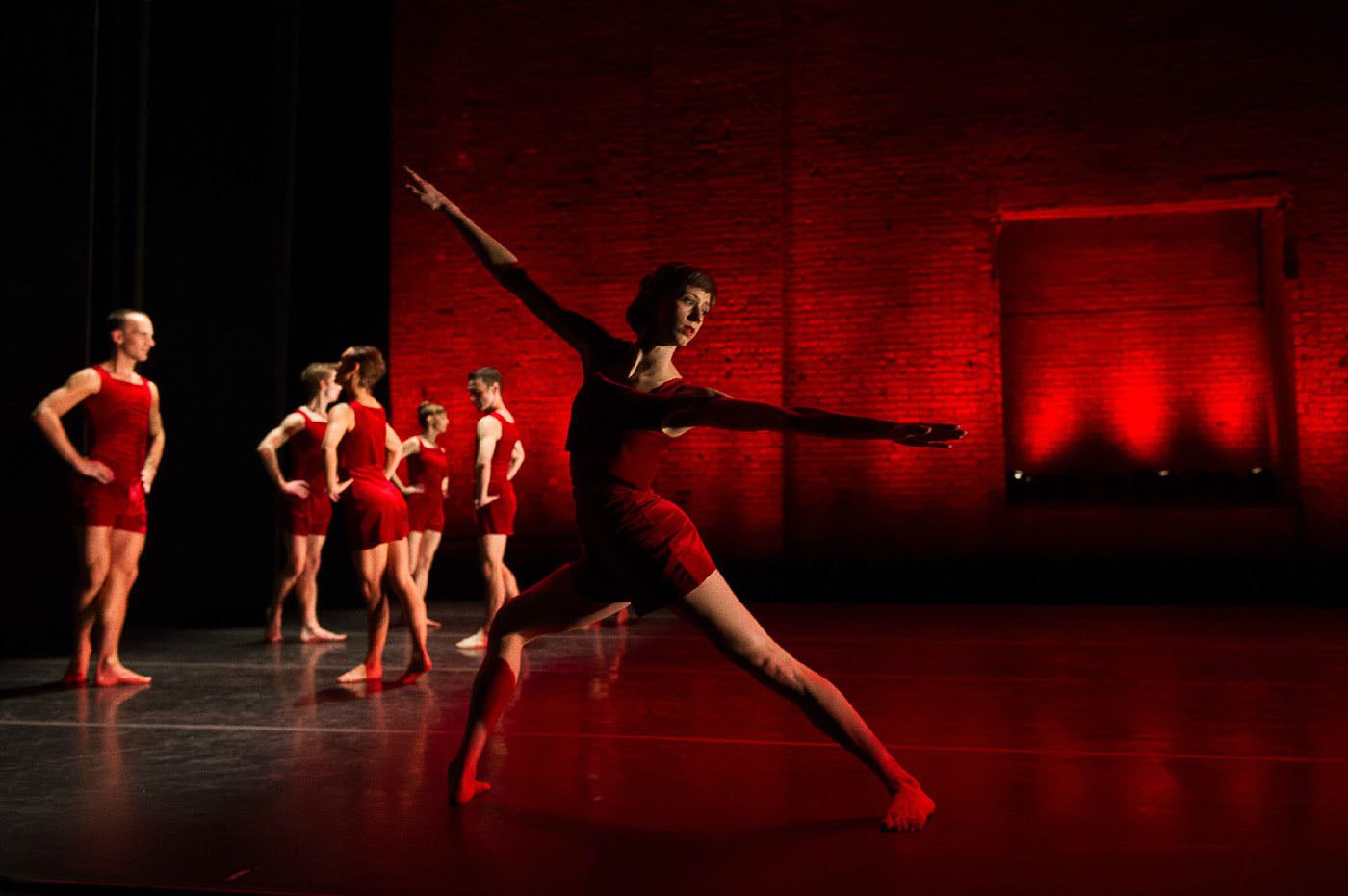 Performance
“the story progresses as if in a dream of glittering surfaces” and “Heaven on One’s Head” by Pam Tanowitz
Place
The Joyce Theater, New York, NY, February 18-21, 2016
Words
Tara Sheena

In a short interview in the program for her company’s recent performances at the Joyce Theater, Pam Tanowitz speaks to her interest in eliminating elements of her dances in order to find moments of greater interest. As an aside, she says, “There’s a joke in my company: don’t miss a rehearsal or your quartet may become a trio.”

The comment comes off as light and funny, both a pragmatic solution to the process of dance-making and a way Tanowitz uncovers more compelling layers of the work. She is a creator who slips subtle surprises into her performances, so it is not farfetched to think that these unmediated moments can make themselves present in her choreographic process as well.

These surprises popped up in ways big and small in the world premiere of “the story progresses as if in a dream of glittering surfaces.” The work had an aliveness to its movement, buzzing with directional and textural shifts. As with much of Tanowitz’s work, the clarity of an upright spine and articulate footwork were standouts, a wondrous collision of ballet’s politeness and modern dance’s density. The influence of Merce Cunningham—from the pairing of seemingly incongruous movements (strong, sturdy legs with floating, lazy arms), the clarity of the torso, and off-kilter balancing—is also a clear presence, aided by the fact that two former members of the company, Melissa Toogood and Dylan Crossman, perform in the work as well. It is, however, important to note Toogood and Crossman, living in a post-Cunningham economy, have now been significant collaborators in Tanowitz’s work. These influences are more a referential flourish than a source for copycatting. Tanowitz has her own sturdy, distinct voice and she is not afraid to use it.

The fullness of the movement never registered as overwrought, though, and lent intrigue to the seeming randomness of the structure. At one point, the musicians, members of the FLUX quartet, finished playing Julia Wolfe’s “Four Marys” and simply exited the space, never to return. Similarly, performers shifted in and out of the space with a fleeting intensity. In “the story progresses,” randomness is not code for disjointed or arbitrary; there was an intellectual framework present that gave itself to the work’s sturdiness.

Tanowitz endeavors to ask unknowably large questions of the body in performance: how monumental can a tendu be? How is clarity inside the hands? How robust can a balance act? As if the dance is the eventual result of these queries, the performance, and its performers, seemed to invest in this continual questioning.

But, how does a dance full of questions locate the answers? The piece carried with it a deep, committed solving of these physical puzzles, punctuated by lighting and costumes that continued this line of questioning, but ran the risk of doing too much. Davison Scandrett’s lighting was at turns dreamy and ominous, with strips of diagonal light traversing and accumulating in the space. The costumes, designed by Reid Bartelme and Harriet Jung, appeared both whimsical and overwrought. Rich hues of plum purple and navy cut powerfully through the air in brief moments, but the excess of fabric distracted from what was beneath.

The piece closes with the brief introduction of five male performers that cycle through a duet, earlier performed by Toogood and Crossman. The men emerge like ghosts, taking Toogood gingerly off balance and languidly guiding her across the stage. These performers come as a surprise, not just because they are unlisted in the program, but they offer a pivot point to broach new territory in these final moments. We did not end up where we started, and that made for an engrossing ending or, rather, the hint of something new.

After a brief intermission, “Heaven on One’s Head” picked up, with vigor, at the seeming anticipatory place we left off. A restaging of Tanowitz’s 2014 work, there was a bumbling recklessness that launched this ensemble piece into a constant matrix of sustained arabesques, floating leaps and asymmetrical balances, all done to Colon Nancarrow’s equally reckless String Quartets Nos. 1 and 3. Reid Bartelme’s blood red velvet costumes electrified the space, helping to emphasize the buoyancy at play.

A memorable moment came when Toogood, again with an approach that is both exacting and ethereal, had a solo that was brought to a front edge of the stage, the main curtains lowering only to reveal performers’ feet underneath. They continued to move with precise quickness as I imagined what I could not see—the arms floating on top, an arched torso, a quick turn of the head. Tanowitz embeds this level of curiosity and intrigue into all of her dances, demanding the imagination of the viewer is an equal player in the work.

“[My] work requires full attention from the audience,” Tanowitz states in her program interview. “‘Heaven on One’s Head’ looks like a certain kind of dance; it’s traditional on its surface. But, it’s also different.”

It is different. And, that may be for Tanowitz to know and the rest of us to find out.

Next
Swan Lake and its Metaphors