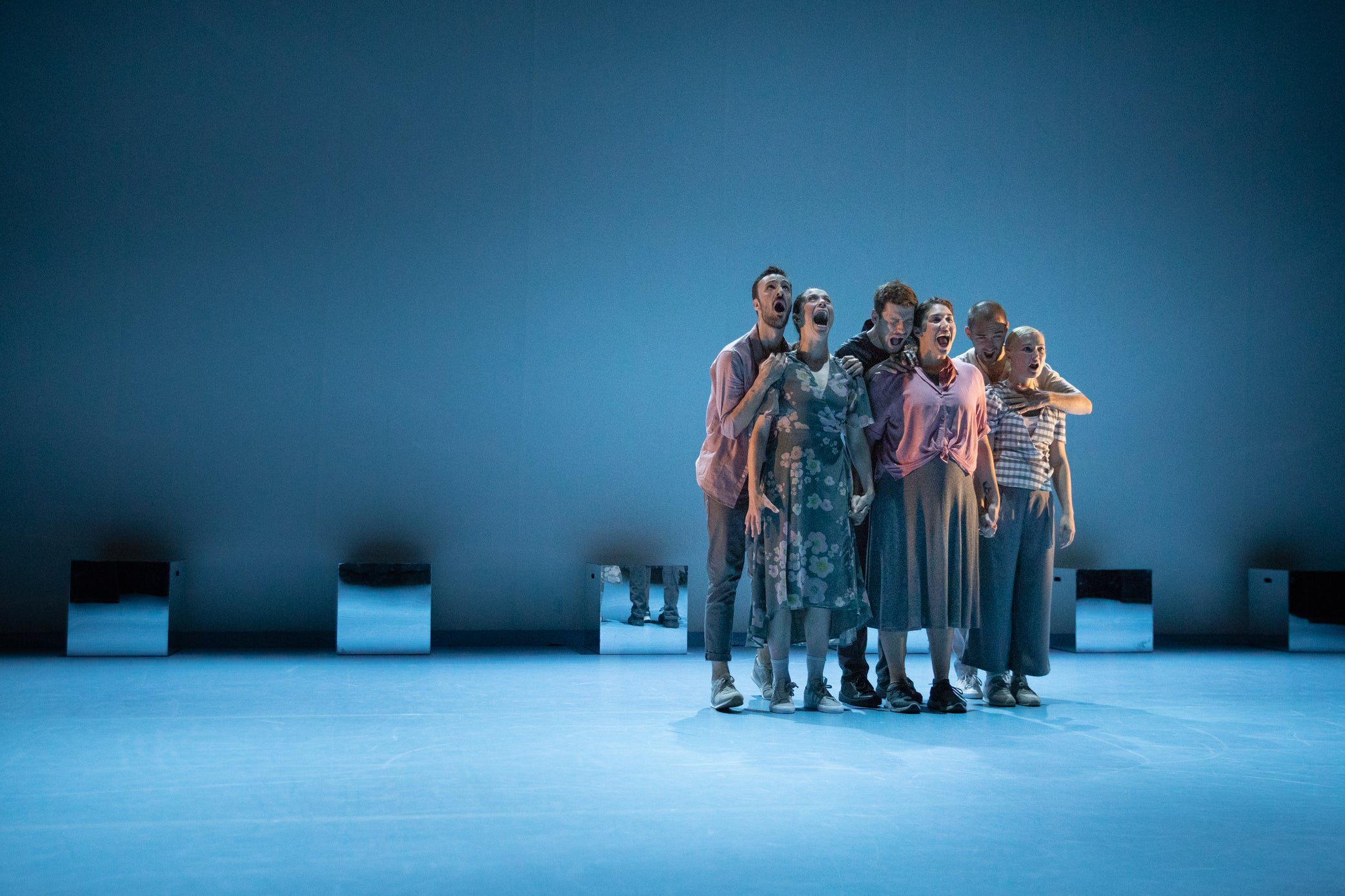 It’s perhaps entirely apposite to watch something as glorious as this strange, elegiac piece from artistic director Kally Lloyd-Jones on this week, of all weeks, when the global impetus is on the effects of climate change, and all of our futures. (We are doomed if action isn’t taken.) It’s all about tension and trust within day-to-day relationships for this “intensely personal” piece choreographed by Lloyd-Jones, in collaboration with the cast.

“The Chosen” is really remarkable, a sensitive and inventive meditation on impending death, and how we measure and pass the time allotted to us. Six mirrored plinths, created by Janis Hart, house the six dancers—three female and three male—and the only initial sounds are a human heartbeat and crashing waves. They seem absolutely unguarded, as natural as inhaling and exhaling. But then, they topple off, get back up, topple, back up, down again like skittles, over and over. There is no delicacy to the way the dancers land, the floor is not padded nor safe, and it makes the audience feel a sense of genuine concern for the wellbeing of the performers.

The ensemble move as though buffeted by gargantuan oceanic waves—except for one. Giulia Montalbano is alone, apart from the others, seemingly locked in her own private agitation. As the others stride, kick and sway in symbiosis and in symmetry, she’s othered. But then, dynamics start to shift within the group. Now, the dancers jog as though training in boot camp, drill-like precision, and there’s only sounds of panting and the squeak of Converse sneakers on the floor. It’s now Jack Webb, clad in sombre grey, who operates alone, moving with a discomforting almost-Butoh phrasing slowness. It falls to the others to repeat the drill, repeating the movements to an exhaustive degree. But others’ movements are loosening, dissolving into Fosse jazz shimmies and shakes.

As music of Strauss is brought in (the gorgeous Four Last Songs) it’s Thomas J. Baylis’ turn to have an existential twitch. He circles the room, then slides his plinth along the floor. Are the plinths symbolic of individual burdens that we carry along to our graves? They could be, yet they also double up as building blocks or office blocks. Now it’s the once carefree and graceful Amelia Cardwell’s steps which seem infused with nagging doubt. The once free movements are the epitome of ambivalence, becoming increasingly contorted. They exist in a strange hinterland between children at play, or adults navigating an awkward path through life—not much difference there, some would say. At other times, they make the cast appear as grit-eyed somnambulists, caught in an ever-looping dream that haunts them.

Now they are commuters on the train, here, they flex at the barre; now they flirt at the bar. Playful gesticulations and expressive faces pervade the inception of the second half, and they all pose as though Botticelli’s allegorical figures in a vast tableaux. But something breaks the beatific looks. Katie Armstrong, with her wonderfully expressive face, is having some kind of seizure. She’s scooped up by Lewis Normand, whenever she seems destined to crash to the ground, and they seem co-dependent, clinging or toy fighting. All of these interactions are as fragile as the people embarking on them, every bit as fallible. They break apart, and Normand clings to Webb in a more desperate way than he does with Armstrong, as though an embrace could cure mortality. He is kittenishly vulnerable, prone to slipping out of reach of Webb’s grasp.

Again though, the scenes shift in the latter stages of the production. Time, or at least our perception of time, seems to be speeding up, the way it does as we age. Now the dancers chitter-chatter, hug, console, and move like animated characters, screaming on mute. Yet, they land as they began, in tableaux of original positions, a plinth each, trapped in their own skin, thoughts, desires and dreams. Only human, and all too human.

Previous
You Want It Darker

Next
Hip and Harmonious