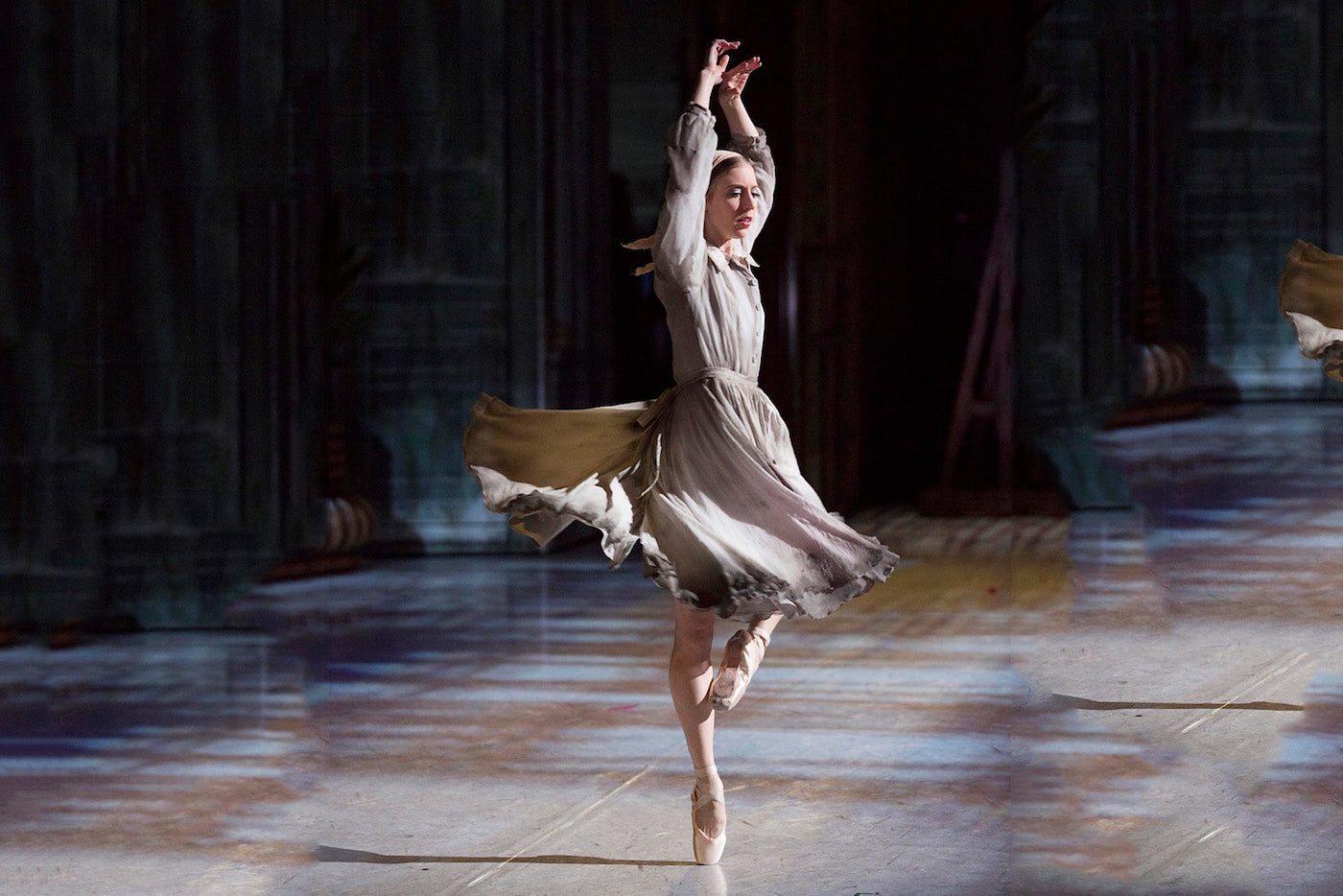 As befits the dreamscape of a fairy tale, the chance to revisit an encore Melbourne-only 2015 season of Alexei Ratmansky’s “Cinderella”1 was one ball I was destined to attend, with a longed for Schiaparelli shoe hat planted atop my head or otherwise.

The surprise appearance of the magnetic, scene-stealer that is Madeleine Eastoe as the stoic and true, ash-cloaked Cinderella (on Tuesday, June 23) made this all the more special. (Eastoe performed Cinderella twice this encore season, concluding with Saturday evening’s final performance. Eastoe later retired, performing the title role in Giselle, Saturday July 4 in Adelaide.) Just like Cinders herself, I could not have foreseen this magical trick, and I delighted in being able to see her perform for a ‘second’ final time, alongside the princely and dapper spring of Daniel Gaudiello.

Making my return to the theatre the following night, I was charmed by the perfect-for-each-other delicacy-to-spark pairing of Ako Kondo and Chengwu Guo in the lead roles. I enjoyed reading their own unique interpretations of their characters as they circumnavigated love and all its hiccups, for the ‘story’ component of any story ballet, for me, is held in equal measure. Ratmansky’s “Cinderella” may be (thankfully) free of lengthy mime sequences, with all padding reserved for the circular costumes (of Dumpy Stepsisters, and the spinning planets), but it requires, above all, the ability to tell the narrative through dance and acting simultaneously. And, in both casts I saw perform, from smaller parts to leads, the strong development and expression of individual characters was exactly what I was treated to. From coryphée Benedicte Bemet, showing a completely different side to her Clara as an alluring and Prince-fixated (or do I mean shoe-fixated?) temptress, and soloist Jacob Sofer’s assured liquid slink as chief Male Temptor to our ever-after entranced lovers, both Eastoe and Gaudiello, and Kondo and Guo, it was all in the details, layer upon layer. On the heels of Frederick Ashton’s “The Dream,” Alice Topp channeled something of Hermia’s post-Puck bewilderment into her fleeting dazzle-the-prince does-the-slipper-fit moments, as Skinny Stepsister, Ingrid Gow, made herself a fantastic gangly assortment of giraffe-long limbs that appeared to move independent of her control. With so many stories unfolding, from ball guests to stepsisters, my eyes tried to take in the whole spectacle, as satin costumes caught the light and Dimity Azoury whirled herself into Venus incarnate.

Exemplified by Eastoe, it is in limbs that kept extending into a position that a sense of constant, restless movement can be read. This energy coursed through the limbs of Cinderella and the Prince, but also through the (fabulous) interference of the stepmother (played with bite by Amanda McGuigan and Valerie Tereshchenko, respectively), and the leaps and chest-out, boy’s club posturing of the Prince’s quartet of friends. A position appeared almost as though reached before a ripple of the arms indicated that it was almost, almost there, almost about to settle. But, of course, settle it never did, and a game of chase was consequently evoked. As soloist Laura Tong, Venus personified in the 2013 debut season, described: “There’s that sense of not just being on the music but playing with the music, understanding the music. [Ratmansky] was challenging us to attack the dynamic of the music in a unique way so you feel like you’re about to be late, but you arrive on time.”2 And this impossible, illusionist’s manipulation and extension of time served to drive the feel and essence of the story, stretching it further, as if it, too, were a part of the body that could lengthen.

In this “Cinderella,” nothing is fixed and quite as it seems: From the Fairy Godmother tipping her bowler hat to René Magritte, to the topiary in the royal gardens inverting the laws of nature, converting at midnight to Man Ray worthy metronomes, Ratmansky’s “Cinderella” remains a conduit to a parallel universe. For me, it called to mind the Golden Age of Magic, from a time when Harry Houdini could make elephants vanish, and handcuffed and chained, he himself could escape from a box of solid iron. The art of illusion and escape typified by such magicians is not so very different to the theatre. A terrific showman, Houdini would stay submerged in his watery cell for longer than he needed to escape in order to build tension and increase the suspense; not so very unlike the explosive arrival of the ardent Prince—at last!—in Act II epitomised by both Gaudiello and Guo’s seeming defiance of gravity as they soared higher and higher. In Ratmansky’s “Cinderella” every character knows how to make an entrance.

Illusion lies at the heart of this fairy tale. If I looked closely, I could see how Cinderella’s Fairy Godmother transformed her attire from rags to Christian Dior New-Look style gown of pure white tulle and gold lamé. If I looked, I could see Cinderella’s ‘magical appearance’ at the ball was actually one of ‘look over there’ staging. If I looked . . . But this of course is not what I chose to focus upon. I chose to focus upon the magical effect. I submit completely to the offer of escapism, be it within a play, film, opera, or ballet. Uninterrupted escapism is a rare treat only a fool would choose to squander. Moreover, in doing so, it makes a marshmallow of me at Act II’s heartbreaking close.

But, in this instance, magic is above all a means to convey a message. At its core, in this telling (and upon these two recent bewitching dips) it is the universal story of two outsiders who met and fall in love. As Sergei Prokofiev, who completed the beautifully melancholic and expansive score in the shadow of WWII, explained: “What I wanted to put over essentially in the music of “Cinderella” was the love of Cinderella and the Prince, the birth and development of this feeling, the obstacles in its way and the realisation of the dream at last. I attached great importance to the ‘fairy tale’ side of it … Musically speaking, Cinderella is characterised by three themes: the first represents her undergoing her ordeals, the second finds her pure and pensive and the third, happy in love. ”3

Whether read as a fairy tale or as testament to the cathartic triumph of the creative spirit in the face of adversity, “Cinderella” remains capable of stopping the clock. Love rules. Once upon an illusion. Or is that a truth?