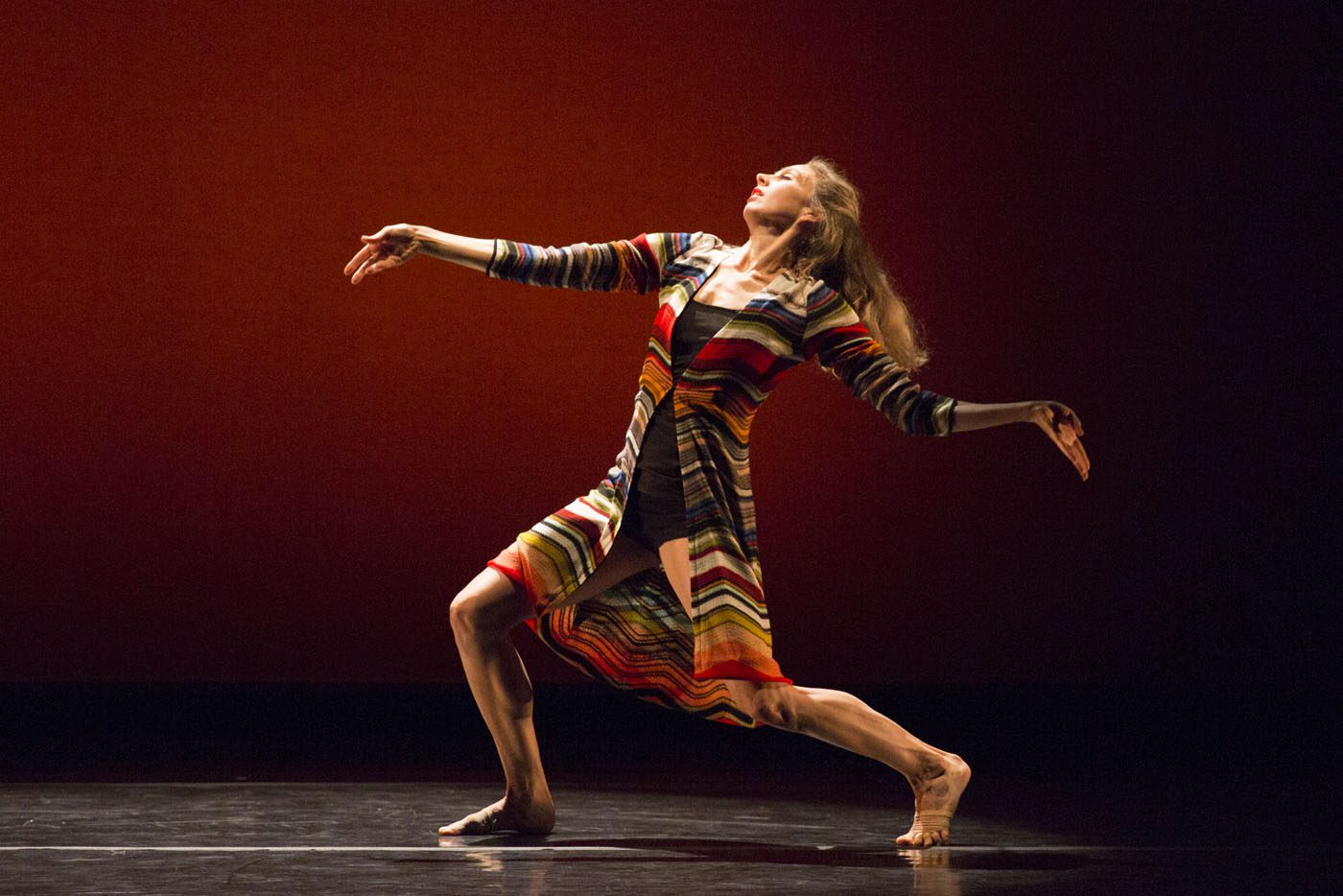 Parsons Dance at the Joyce Theater

Every year, revellers flock to New York City’s Times Square to usher in the New Year. In 1999, the celebration was more grand than usual: Times Square 2000 featured twenty-four hours of live programming to usher in the Millennium. More than one million people attended; more than one billion tuned into the live broadcast. One of the masterminds behind this spectacular was David Parsons, who choreographed and directed its dance elements. Parsons seems an ideal choice for the event: since he founded Parsons Dance in 1985 with Tony Award-winning lighting designer Howell Binkley, he has been developing pieces that pulse with energy and excitement. In its latest season at the Joyce Theater, Parsons Dance yet again aims to dazzle. Its opening night program does have its thrills, and each piece moves with a stunning degree of confidence. But the evening’s theatrics—strobe lights, masks, live accompaniment—ultimately threaten to overpower the technical prowess of Parsons and his dancers.

“Microburst” opens with four company members hovering over composer and tabla player Avirodh Sharma. As the dancers, in black, ruffled bodysuits, trudge and sway to the center of the stage, they play to a sparse, primal sensibility. They heave and twirl, ever so slightly out of sync. And then they shift to a more serpentine tone: they press their hands together in an upside-down prayer; they wriggle and lurch. There’s an intricacy to their movements here, and the sheer athleticism required to keep up with the plucky accompaniment is impressive. The dancers look, at times, like mechanical toys whose springs have burst. The choreography is diluted, though, with moments that verge on gimmicky: when one of the men toys with touching a woman’s behind, she playfully slaps him. When the men engage in a playful dance-off, the women watch, swaying with the tabla and mouthing Sharma’s lyrics. And one of the dancers rings a bell by Sharma’s perch, to the audience’s amusement. The piece is, it seems, intended to be light and lithe, but there’s something heavy-handed about the performers ramping up the cheekiness and charm. Though the music bubbles, the piece never bursts to the surface.

“Stranger to the Rain,” a tribute piece to Broadway lyricist and composer Stephen Schwartz, is another work that chases after accolades. Parsons developed the work for Schwartz’s 1991 Children of Eden track “Stranger to the Rain;” in it, Yonah, a servant girl who is cast off of Noah’s arc for being a descendant of Cain, acknowledges her plight—and reveals her resilience. Parsons stages this song about an outcast as a duet, and a buoyant one at that. And throughout the piece, Justus Whitfield handles Zoey Anderson as if she is too prized to place on the ground. He pulls her onto his shoulder, then rolls her down his trunk of a body with a magnetic charge. She appears weightless, light as a husk. This delicate choreography doesn’t quite line up with the expressive accompaniment—a live piano performance from Schwartz and soloist Shoshana Bean. For a song whose lyrics include “for I am bound to walk alone,” wouldn’t there be more tension, more power play? Parsons does hint at this underlying dynamic at the close of the piece, when Whitfield, finally worn down, crawls on his side across the stage, with Anderson perched on him like an heiress being carried on a litter. The dancers’ performance is a feat—Anderson, of course, is not light as a feather, and Whitfield is not stiff as a board—but the choreography doesn’t quite square with the score.

Perhaps “Stranger to the Rain” is best seen as a prelude for Anderson, who hurtles through Parsons’ 1982 classic “Caught” (usually performed by a man) with a fighting spirit. The piece is a sure crowd pleaser—patrons cheer with recognition at its opening synth note. In it, Anderson flexes under a series of spotlights; she twirls with the grace of a ballerina, then dangles her forearms like a scarecrow, then flexes them like a bodybuilder. She’s a shapeshifter, and when the hazy spotlights dim and strobe lights replace them, she also becomes a manipulator of time. As the strobes flash, Anderson appears only intermittently. In this flashes of light, she is almost always in the air—leaping across the stage or jumping upright—and never in the same region of the stage. She looks like a living flipbook. Whenever the strobe lights quit and the spotlight returns, she is standing under it, her arms folded behind her back, as if she has completed a magic trick. And in a way, she has pulled off a feat. Under the strobes, her poses are fixed and she appears to levitate, even though her body is consistently and vigorously on the move. In this capacity, the theatrics of the piece actually call attention to the dancer’s athleticism and prowess. She must be one step ahead of the spotlights, lest they catch her looking anything less than herculean.

The other solo of the evening is “Reflections;” for the more pared down piece, Parsons pulls the strobes and, in their place, spotlights a quiet passion. Parsons developed the work with and for his longtime, now outgoing company member Abby Silva Gavezzoli. The piece, set to Claude Debussy’s “Clair de Lune,” calls to mind a private dance for a lover on a Sunday morning; her flowing Missoni robe only heightens this impression. “Reflections” is intimate and playful, and Gavezzoli performs it with tender authority. The drama here emanates from within her, for she has no partner to play off of or dramatic lighting cues to meet. It is focused in her hands, which alternately clasp one another behind her back; cup her heart; stretch towards the audience; and let go of invisible wisps of energy. In light of Gavezzoli’s pending departure from the company, the piece also feels like a choreographed tidying of loose ends. As it reaches its final beats, Gavezzoli treads towards the back of the stage, turns briefly towards the audience, then back towards the hazy sunrise (or is it a sunset?) of a backdrop. “Reflections” is wistful but clear-headed, and so, it seems, is the woman who has brought it to life.

Where “Reflections” honors life, “Ma Maison,” which closes the opening night performance, is more morbid. The full company work, commissioned by the New Orleans Ballet Association and choreographed by Trey McIntyre, is a jaunty ride featuring oversized skeleton masks and swing tunes. From the top, the piece confidently frames itself as a roaring, macabre cabaret. As the dancers stumble, stretch, and mime their way through tunes such as Boyd Atkins’ “Heebie Jeebies,” they charm the audience. These dynamic moments are charades are not enough to hold the piece’s center of gravity, though, and with each new song, it wobbles more precariously. By the time “Ma Maison” saunters into a track that declares “life is so complicated,” and “life is overrated,” only the latter claim feels applicable. Gavezzoli briefly restores dynamism to the work with an emotive solo. She thumps her chest, rolls one hand around her other forearm like she’s wrapping it in a bandage, shakes hand like skeleton, and collapses onto the floor, all to the tune of “Holy Ghost Power.”  But the piece finishes with the company throwing a burst of confetti onto the stage. The final touch is a decorative one.

Next
Rite, A Sequel