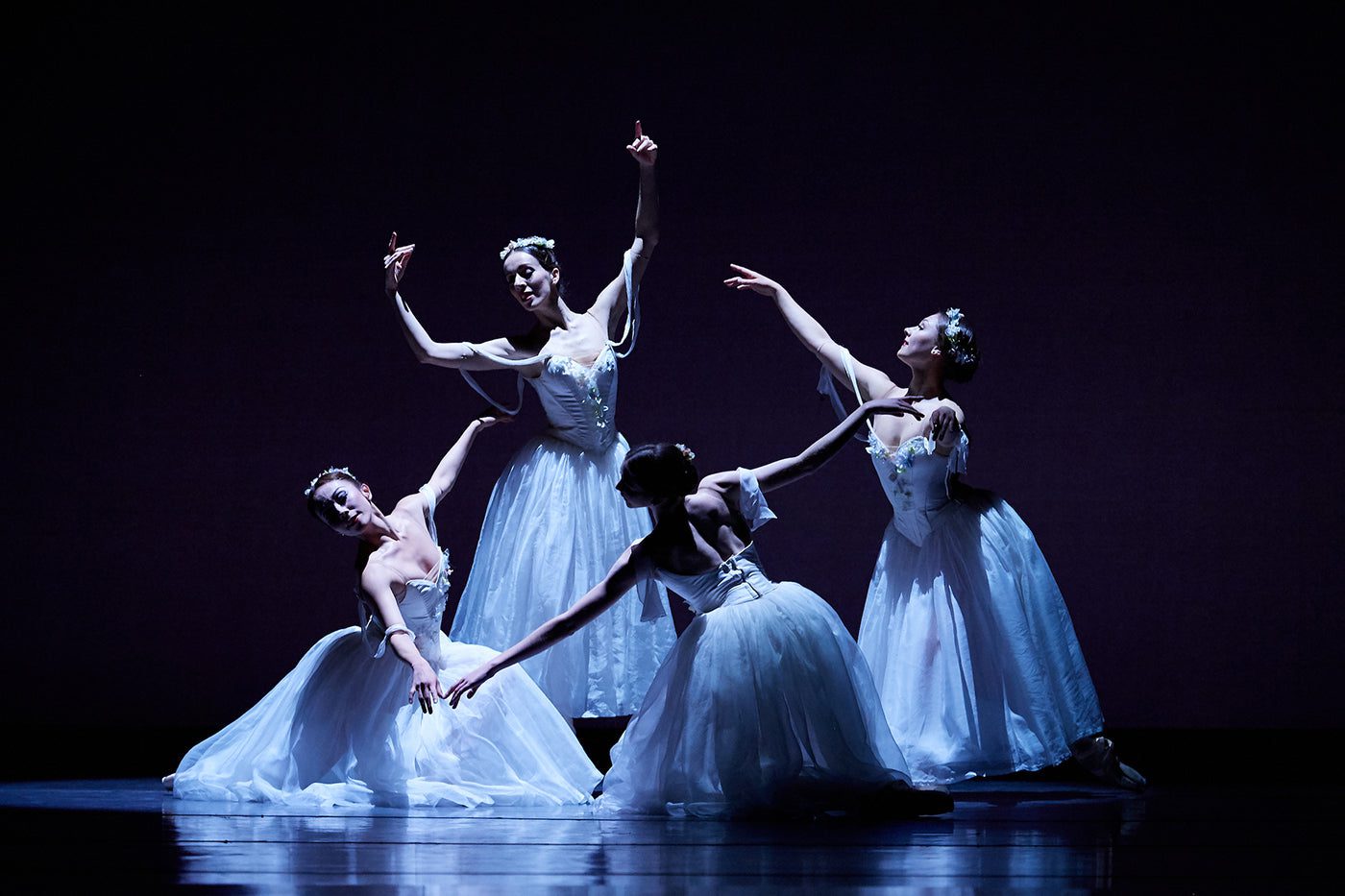 Boston Ballet closed its 2018-19 season with a touch of the new and a revival of the past with “Rhapsody,” a mixed program featuring seldom-seen works by Leonid Yakobson, alongside George Balanchine, and the world premiere of “ELA, Rhapsody in Blue” by Boston Ballet principal Paulo Arrais.

The first three pieces showed the kinetic and emotional breadth of Yakobson’s work, spanning his choreographic intersections with history, comedy, art, and romance. His iconic take on “Pas de Quatre” began the evening, with the curtain opening to a tableau of four women dressed in the tea-length white tutus of the Romantic era. Unlike Jules Perrot’s original “Pas de Quatre” (1845) which emphasized the dancers’ alleged rivalries, Yakobson’s version provides one of physical and metaphoric supportiveness.

With flowers adorning their hair, the dancers remain linked, hand in hand, as they traverse the stage in graceful unison. Set to Vincenzo Bellini’s score for strings and harp, the four remain as one harmonious entity, folding in on itself and reaching outwardly through tiered arabesques as the music rises and falls. At last they separate, bouréeing backwards to the four corners of the stage where they begin a series of solos: the first joyous with triumphant leaps and delightfully quick footwork; the second flirty with impressive lightness and hops en pointe; the third a solo of luscious longing with a quiet smile; and the fourth ending each turn by flawlessly opening into the next movement with visible eagerness. The four reunite with a somber waltz that entwines (often one versus three), once again permanently fused with a brief homage to the famous “Swan Lake” pas de quatre, ending the tableau.

In direct contract to this classical work is “Rodin,” a dynamic example of Yakobson’s experimentalist choreography, mid-twentieth century in the Soviet Union. Here, we see Yakobson persevering against conformity and convention, while taking inspiration from the sculptures of French artist Auguste Rodin. This marked the Boston premiere of “Rodin,” and Boston Ballet should be commended for its impassioned portrayal of the work. The lights rise to briefly reveal four statuesque couples in nude-toned unitards against a black abyss. One at a time, each couple performs their take on physical and emotional love, setting in motion Rodin’s sculpted moments. The first embodies his Eternal Spring with playful, youthful love. In a take-me-leave-me game of affection, a young woman toys with her suitor, inviting him to grasp her waist then pushing him mischievously away. The second, based on Rodin’s The Kiss proffers a deeper, mutual adoration, pulling each other close into a deep embrace. A fall, when caught, evolves into a luscious lift. Their hands hold each other’s faces, at moments shaking their heads in endearing disbelief at their luck to have found one another.

The third (The Eternal Idol) takes this one step further with a particularly striking beginning as we watch the man bench-press his lover into an impressive lift by her knees and pelvis. The simple costuming allows us to see their muscles rippling, as the difficult adagio reveals a sensual tension between the two. Leaning back in a forced arch relevé, the dancers’ legs quake. A brief playful swinging gives way to a moment of reverent eye contact, before ultimately returning to their opening muscular lift. Yet just as we have settled into a gradual progression of deepening romance, the fourth duet shatters the pattern with Yakobson’s take on Rodin’s Minotaur. We watch as the woman shifts to her knees in a moment of prayer before being swept to her feet—the minotaur grasping her wrists in a fit of sexual animus. Forceful, heavy, and monstrous in intent, the duet ends the sequence of love with a frightening portrayal of the dark side of eroticism.

The final piece by Yakobson on the bill was “Vestris,” bringing lightheartedness to the evening. Principal dancer Paul Craig was brilliant in this role (originally created for Mikhail Baryshnikov), sending the entire theater into fits of laughter with his amusingly dramatic vignettes that toy with the triumphant score of Gennandi Banshchikov.

The new work of the evening was Arrais’ “ELA, Rhapsody in Blue,” depicting the story of a young woman’s struggle with societal pressures, domestic violence, and the empty-nest phase of motherhood. Deeply narrative and set to the ever-popular “Rhapsody in Blue” by George Gershwin, “ELA” has its strengths and weaknesses: The female soloist is accompanied by an entourage of shirtless men who serve to bolster her self-esteem and guide her through the storyline, yet at times they become an unnecessary distraction. Likewise, the domestic attacks appear without cause, and lead to an overly-acted scene of motherhood in which the protagonist’s son literally flaps his arms (resembling a baby bird leaving the nest) as he is lifted offstage. For a work that sought to promote female empowerment, one questions Arrais’ choice to include only one woman in a cast of 16. Still, the choreography itself is enjoyable and accessible, with elements of “Chicago” entwined with contemporary ballet to create a dynamic and memorable work.

Yakobson’s choreographic career is often contrasted with that of George Balanchine, with the two choreographers sharing a birth-year and formative years in Russia. Where Balanchine left the Soviet Union to become a towering figure of American ballet, Yakobson remained to struggle against anti-Semitism, censorship and criticism of his experimental work. Emphasizing this connection, Balanchine’s “Tchaikovsky Piano Concerto No. 2,” dedicated to Imperial Russia, was the final ballet of the evening. Though masterfully performed with technical precision and formal splendor, on the heels of “ELA” and the Yakobson miniatures, it felt overly traditional, and nostalgic.

Next
Rigour and vigour