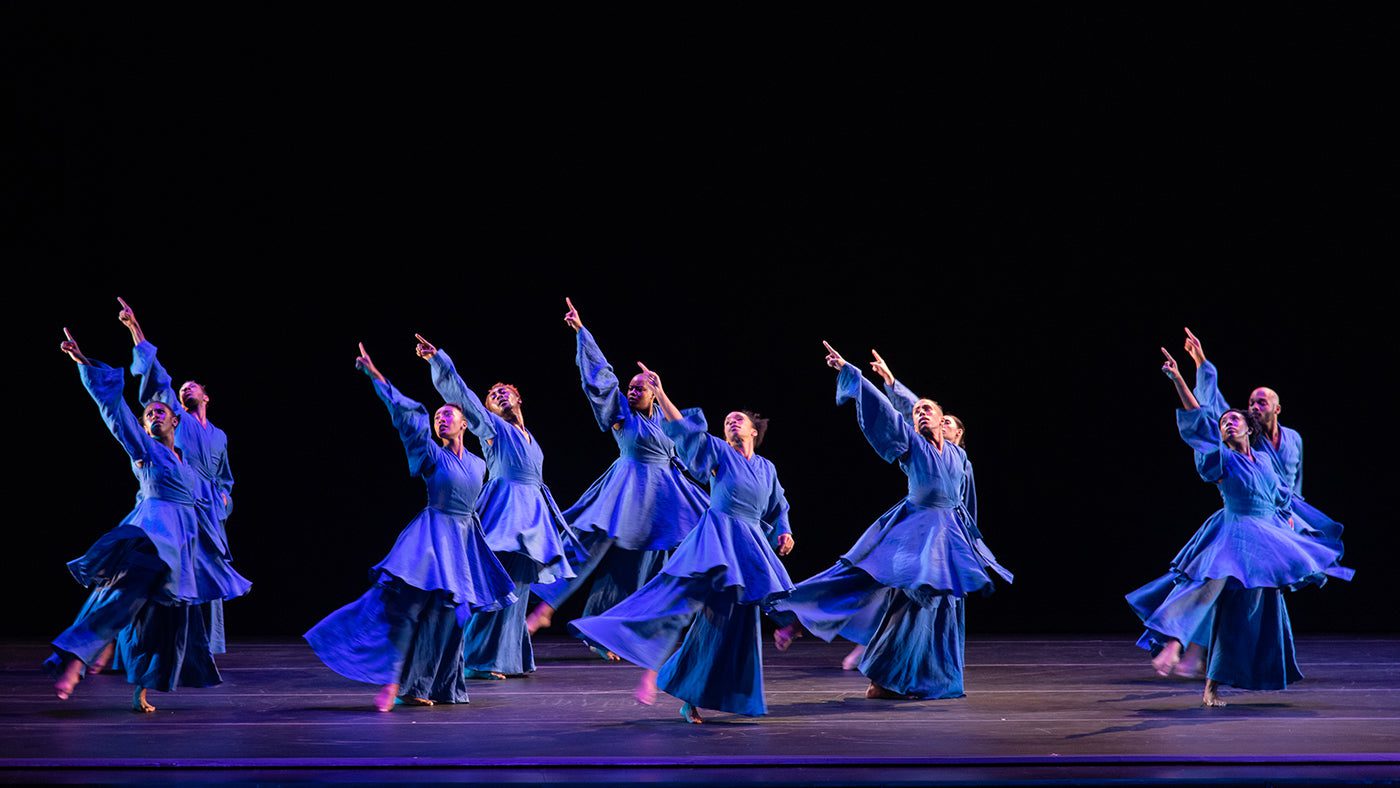 The best dance on the West Coast in 2022

With the global pandemic mostly in the rearview mirror, dance lovers once again enjoyed—literally—a movable feast. Indeed, the movers and shakers on this writer’s radar during the past year proved to be resilient, gorgeous and, happily, an embarrassment of riches.

Opening the CAP UCLA season with its first live performance since 2020, was Brooklyn-based Ronald K. Brown/Evidence. The troupe made an indelible mark in a program that included, “The Equality of Night and Day: First Glimpse.” The work in progress was set to an original piano score (heard on tape) by the dance community’s latest go-to composer, Jason Moran.

With its spoken word/speeches (also pre-recorded) by educator/activist Angela Davis—still going strong at 78—“Equality” could easily have veered into heavy-handed politicization, but instead had a neo-redemptive quality: The nine dancers deployed a range of moves that included dizzying pirouettes, unison dips and upraised arm motifs that gave a glimmer of hope to the world, one that had become alarmingly fragile after the Russians had senselessly invaded Ukrainian just weeks before.

But that is the power of dance. And wielding that power in a spectacular solo, was the Catalan artist Marta Carrasco. In what was billed as her farewell performance at Los Angeles Theatre Center last June, the performer delivered a gut-punch to the soul in her one-hour work, “Perra de Nadie” (“Nobody’s Bitch”). Mining her Graham/Wigman/Bausch inspirations, Carrasco laid bare a dark exposé of humanity’s flaws, albeit one flecked with humor and fearlessness. A terpsichorean treasure who journeyed to a land of ritual and ultimate rebirth, she will be missed.

Thankfully, New York-based Complexions Contemporary Ballet has no plans to abandon the stage any time soon. Raising the roof at the Wallis Annenberg Center for the Performing Arts, the 15-member company that was co-founded in 1994 by choreographer Dwight Rhoden and Desmond Richardson (both former Alvin Ailey dancers), presented the West Coast premiere, “Snatched Back From the Edges” (2021), and the eternal crowd-pleaser, “StarDust,” a David Bowie tribute that premiered in Detroit in 2016.

While “Snatched” plumbed the emotional aspects of hot-button issues—from gun violence and racial inequity to social struggles—it wasn’t preachy or heavy-handed, with the dancers serving up bits of social dance, hip-hop and blissful bourrées. But it was the irresistible Bowie tribute that revealed the dancers as joy and athleticism incarnate.

From the intimacy of the Wallis to the vast reaches of the Hollywood Bowl, L.A.’s iconic venue that celebrated it 100-year anniversary this year—and where a ticket can still be snagged for a buck—the hills were alive with the sounds of Gustavo Dudamel and the Los Angeles Philharmonic. And—wait for it—some 30 étoiles of the Paris Opera Ballet made their long-awaited debut with our local band.

Haunting, as well as humorous: Butoh master Oguri, a Los Angeles jewel, mesmerized at the Electric Lodge in August in the 19th iteration of his series, “Flower of the Season,” this time performing with Spain-based Andrés Corchero in “Body of Evidence.” Tackling the subject of book-burning, the homage to American sci-fi writer Ray Bradbury and his 1953 dystopian novel, Fahrenheit 451, was nothing less than a roadmap of wildly unsettled passions, the dancers easily veering from the droll to the sublime and making full use of their agile, glorious bodies.

Oguri was also the subject of the splendid exhibition, “Dance and Eye,” at Venice’s Arcane Space in November. With five photographers having documented and captured Oguri in both motion and stasis—and his wife, Roxanne Steinberg documenting the process on film—this was yet another way to experience the wonders of a dancer nonpareil whose gifts seem to know no bounds.

As autumn descended, with it came a frenzy of fabulous dance performances: Diavolo|Architecture in Motion took to the road, performing “Trajectoire” and “S.O.S. Signs of Strength” (the latter premiered at the Wallis in March) in Houston, TX. Jacques Heim, who founded the company in 1992 and is known for its risk-intensive, hyper-physical dance, as well as its massive structures, has been working with veterans since 2016.

Featuring voice-overs and live storytelling (dramaturgy by France Nguyen Vincent), “S.O.S.” is gritty and gorgeous, gut-wrenching and grand. Set around and on top of a Daniel Wheeler-designed movable platform embedded with sockets that sport 10-foot poles, the piece has the eight veterans and eight dancers maneuvering amid these occasionally ominous-looking steel pegs, their slitherings and gravity-defying leaps a display of acrobatic prowess.

Let’s say that Heim meets Sun Tzu in this monumental opus that is a literal theater of war. An added bonus also proved poignant: As part of the troupe’s October gigs at Jones Hall/Performing Arts, Heim was recognized by the Department of the Army with a medal for Meritorious Public Service.

Oozing technique and unabashed brio, the nine dancers, including David Adrian Freeland, Jr. and Nayomi Van Brunt, were testament to what the body can do, with Akiho’s percussive and riotous music the perfect backdrop to the ferocity of the performers who not only appeared to be channeling the music, but also gave the impression of becoming said sounds.

Music was also the raison d’être for Mark Morris Dance Group’s delectable, “The Look of Love,” a world premiere presented by BroadStage at the end of October. The hour-long piece made use of 14 songs from the vast oeuvre of multi-Grammy-award winning pop composer and songwriter, 94-year old Burt Bacharach, with lyrics by his frequent collaborator, Hal David, who passed away in 2012.

The tunes were, as is Morris’ wont, performed live by pianist Ethan Iverson—who also made the jazz-inflected arrangements—with Broadway chanteuse Marcy Harriell crooning such familiar ditties as “Raindrops Keep Fallin’ on My Head” and “Don’t Make Me Over.”

The chamber dance, akin to a nostalgic journey through time, also featured the performers maneuvering chairs throughout the work, and while Morris’ choreography can be deceptively simple, occasionally resembling a ballroom dance, the work was anything but. In other words, “Love” was a clarion call of motion, where articulated footwork, deep pliés and robust leaps signaled a bodily truth that continually came alive.

The saying, “all politics is personal,” rang true in November, when Xander Parish gathered a group of 18 dancers to perform at Segerstrom Center for the Arts in a gala program, “Reunited in Dance.” Featuring stars who had fled Russia from troupes that included the Mariinsky Ballet and the Bolshoi Ballet, the program gave figurative voice—and literal bodies—in support of their art, bodies such as Ilya Jivoy, Joy Womack and Boris Zhurilov.

Other highlights of a fruitful 2022: Hamburg Ballet, directed by John Neumeier since 1973, made its debut at the Music Center in March with Bach’s ineffable “St. Matthew Passion,” a Los Angeles Opera production that featured 42 dancers, while his 1998 “Bernstein Dances” was devoted to the music of Leonard Bernstein in a trio of concerts. So, too, did the always-terrific Garth Fagan Dance—now in its 52nd year—bring deep satisfaction in a mixed bill program seen at the Nate Holden Performing Arts Center in April.

An added treat: Angelenos were treated to cinematic brilliance in “Liquid Light,” a collateral event at the 59th Venice Biennale. Made by acclaimed artist Lita Albuquerque and featuring her dancer/choreographer daughter Jasmine, the film, shot in Bolivia, was screened at L.A.’s Kohn Gallery and is as exquisite as it is profound.

Also toe-tappingly entertaining: The Broadway musical, “Ain’t Too Proud: The Life and Times of the Temptations,” is currently in a three-week run at the Ahmanson Theatre. The story of the five-member soul group, the show not only featured all of their chart-toppers, including, “Papa Was a Rollin’ Stone,” but also showcased Sergio Trujillo’s Tony award-winning choreography in a cavalcade of cool dancing.

As the year ends, unfortunately the Russia/Ukraine war does not. But the return of live performances gave reason to rejoice. Bacharach and David may have said it best in their 1965 ballad, “What the World Needs Now is Love” (also featured in Morris’ latest work), but add to that global necessity, dance, and hope for humankind, along with peace, remains within our collective grasp.

Previous
The Power of Performance

Next
A Gift for the Season