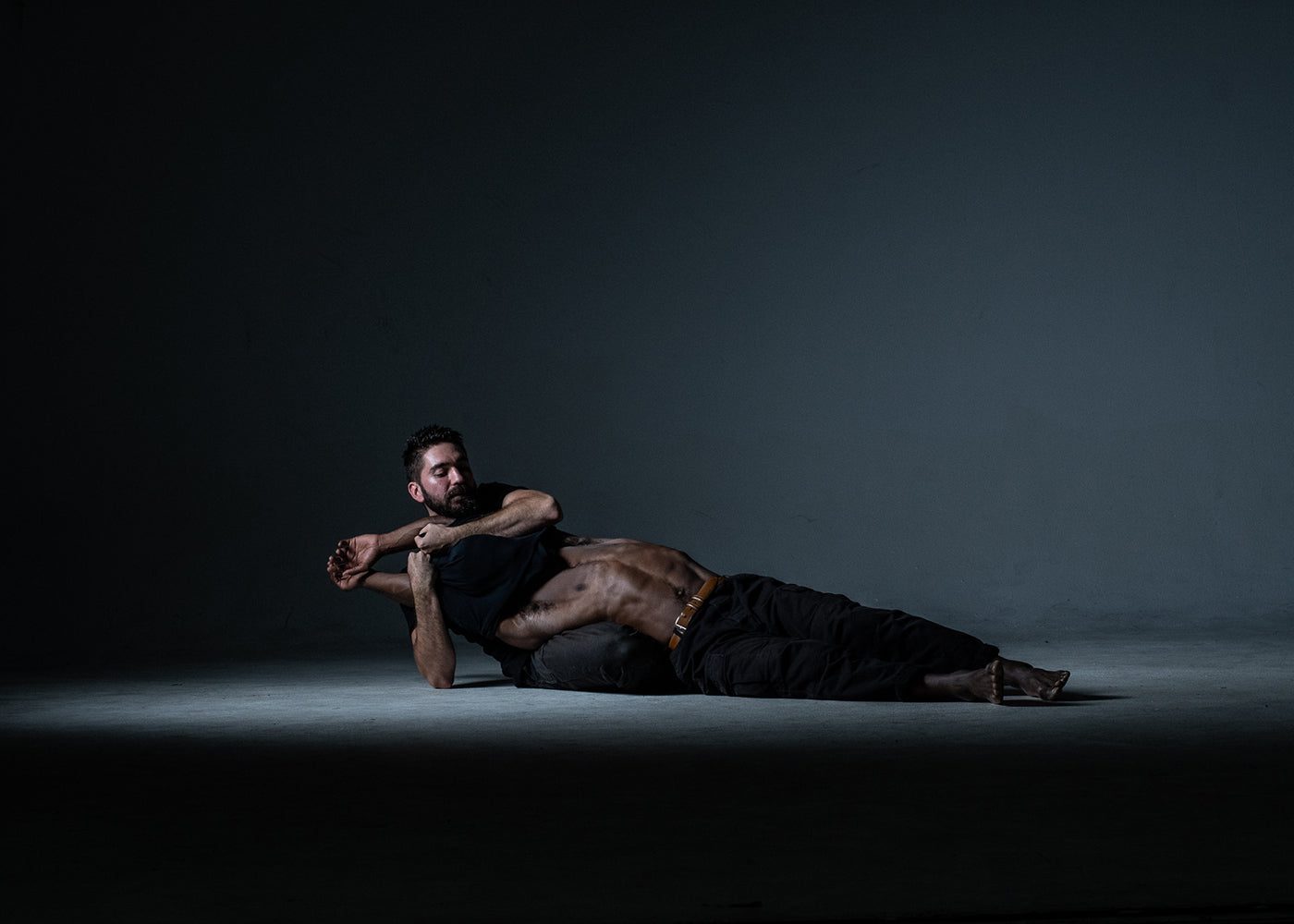 Geometrically speaking, a line is a symbol of freedom: A figure formed between two points, the ends are limitless, extending to infinity. In Baye & Asa’s “HotHouse,” lines are binding rather than liberating. The duo Sam “Asa” Pratt and Amadi “Baye” Washington are stuck in a large, rectangular plexiglass structure. They pace in linear patterns back and forth, unable to escape the confines of four finite walls.

This transparent structure was the catalyst for “HotHouse,” which premiered at Pioneer Works in Brooklyn, a big, brick, former warehouse with tall ceilings which used to manufacture railroad tracks and other machinery. The structure was conceived during the height of the pandemic as a way to present performance safely: The dancers move behind glass like a living museum display, avoiding physical contact with the audience. Considering the idea of confinement led to wider social and political conversations about isolation and injustice, and “Covid-19’s role in unmasking the greater systemic failures of America.”

The piece begins kind of like a scene out of The Martian. The floor of the artificial unit is dirt, and when Washington grabs a rake and starts etching the soil in parallel rows, we wonder if he’s going to plant potatoes. He soon sets the rake down and, accompanied by a loud power chord from live musicians Julian Pratt and Harlan Steed of Show Me The Body, explodes. He moves spastically, kicking and turning, his limbs swinging and punching through the air.

Washington and Pratt are both powerful performers with a unique vocabulary that has qualities of popping and martial arts with post-modern sensibilities. The audience was positioned all around the cage, meaning that there was no inherent front, and viewers were encouraged to travel around. I was standing at the wall where Washington danced for the majority of the time. There were times he would be still and stare at the wall. Could he see me then, on the other side? His gaze implied a distance far removed from those few inches, with a disinterest that comes with hopelessness.

While excellent soloists, Baye & Asa’s greatest strength is their partnering. Friends and dance partners since elementary school, they exemplify an incredible trust which allows for furious catching as well as falling. They thrust their bodies into each other at full speed and weight. Though virtuosic, there’s a real humanness to these moments. Leaping on each other’s backs and rolling off, stepping on each other and pushing heads into one another’s chests, they are concerned more with how things feel than how they look. Shapes and lifts are created through the actions rather than the other way around.

These aggressive phrases are juxtaposed with tenderness. The space is transformed into a number of different settings, and several times, we see scenes from an emergency room. Either dancer collapses to the floor, clutching his heart or neck and struggling to breathe. The other is always there to care for him. In a recurring image, as Pratt lay defeated on the ground, Washington cradled his head and monitored his pulse.

Props aid in these spatial transformations, and with a change of clothes and a few accessories, the hospital changes to a prison. Washington and Pratt get into fights and roll around in the dirt. They spend more time staring at the wall and pacing. Washington fills a metal bowl to wash himself.

Meanwhile, on the other side, Pratt gets dirtier. There’s a jug of dark red fluid on the wall close to the floor—it looks like a human-sized dispenser for hamsters—and he bends down to drink from it. After some violent interactions with Washington, Pratt ends up vomiting on his wall. He is hosed off by Washington as he cowers against it, filthy, sickly, and now soaked.

Prisons and hospitals are clear choices when it comes to depicting confinement, but “HotHouse’s” concluding scene is more of a surprise. After wallowing at rock bottom, Pratt rises. Shirtless, he puts on a robe, extends his arms, and hangs his head, a vision of the crucifixion. He floats and turns gently in what is the first lyrical moment of the piece. The lyrical moment is joined by lyrics: a growly voice sings over guitar strumming, “I like the Christian life.”

Baye & Asa’s work often explores themes of race and racism (their first major piece, “Second Seed,” was based on the 1915 racist film The Birth of a Nation). In “HotHouse,” the duo looks at the notion of “White Jesus,” the myth that Jesus Christ was a White, blonde man with blue eyes. Historically inaccurate, this propagandizing of Jesus as a White Savior introduced and reinforced White supremacy globally. For “HotHouse,” then, Christianity and this idea of Jesus become the last examples of confinement.

Accompanied by the ironic Christian rock, we might suppose this scene is simply a dismissal of Christianity, certainly a justifiable one in acknowledging the tremendous wrongs of the Church as institution. Yet, as Pratt sways and bends, his eyes wide with anguish, his presence is hard to dismiss. Covered in sweat and visibly drained, he is utterly pitiful. In conclusion, the structure has taken on the symbol of institutional injustice, and we see our supposed figure of worship with tremendous sympathy as even He stands desperate, exhausted, and imprisoned.