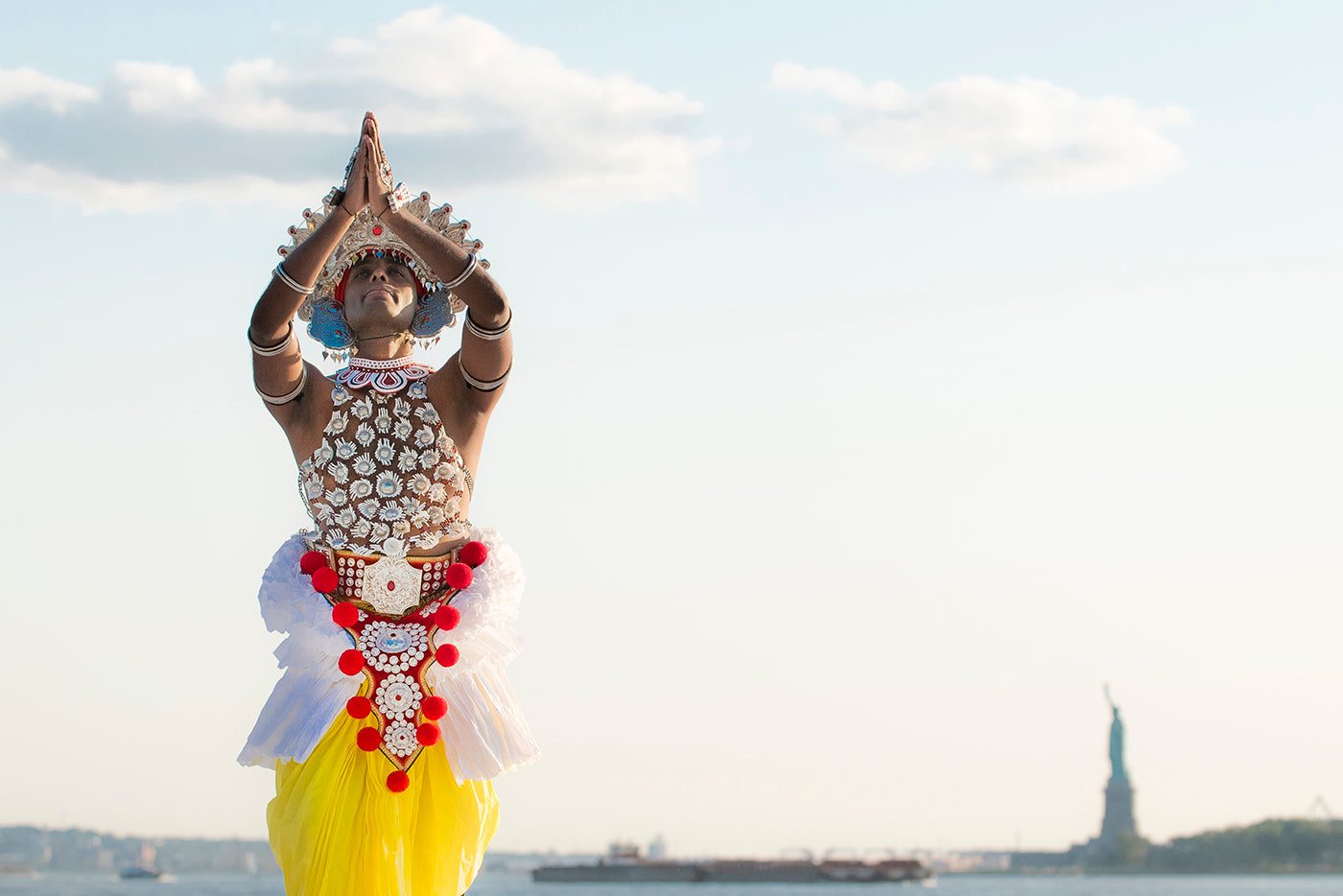 Though Battery Dance Festival has had many names and neighborhoods through nearly 40 years running, shifted by floods and unnatural phenomena altering the geography of the city, its home here, along the waterfront in Battery Park against the New York Harbor, brings the sublime into the space. The sun, in particular, backgrounding the seven dances on the first day of the weeklong free festival, arcs through the acts of the show, giving a program from companies from around the globe some grandeur and structure. It’s beautiful, and free, so its flaws can be forgiven.

On Sunday, August 11th, I walked to Robert F. Wagner Jr. Park through the Financial District on the first night of the week-long performance series, and took my place on a patch of grass near the open-air stage next to the water. I would see work commissioned from artists from over thirty countries, the director of Battery Dance announced from the stage. This emphasis on the international span of the performance series served a recurring theme; we would hear about Battery’s commitment to teaching refugees in Germany and teacher-training programs in Bangladesh, how the dancers set to perform in the festival had run into unexpected travel trouble and would not be present, save for the generosity of various NGOs, UNHCR grants, etc. Multiple embassies received shoutouts, and it was unclear to me whether or not there was additional travel strain then normal, or if the mundane dystopia of international travel and national borders merited their own announcement.

The festival opened with a blessing from Danuka Ariyawansa, a dancer from Sri Lanka who performed a piece of classical Kandyan dance in honor of his country, still reeling from the massive terrorist attack on Easter Sunday of this year. Ariyawansa moved in hypnotic and graceful lunges that picked up speed over the course of the performance. As he performed, I tried not to, then gave in and watched as next to me, a woman made slow hip movements in time with the music, eyes closed and facing directly away from the stage. I found that my ingrained (and obvious) approach of ignoring the audience and focusing on the dancers would not work for this festival, with audience members who seemed as integral to the evening as the dancers themselves. A couple to my left smiled down to their FaceTime camera open on the grass, speaking at full volume. “Aw man! Out of the house for like ten minutes… nothin all day but just lay there…” When I looked back, the dancing woman in the audience was gone, and so was Ariyawansa.

The second and third pieces of the festival belonged to Leah Barsky and Cristian Correa, an Argentine tango couple who have toured and taught throughout the United States and Europe. Both Correa and Barksy have multidisciplinary backgrounds, and bring classical ballet training (and in Barksy’s case, contemporary dance) into their interpretations of tango performance. Barsky’s high extensions and aptitude for complicated lifts made that especially clear.

Three members of Turkish dance company Mezopotamya Dans performed a world premiere piece after Barsky and Correa, in a longer work beginning with the dancers lying on their backs, deflating and inflating water bottles with their breath as their bodies followed in synchronized holds against trancelike music. They propelled themselves backward across the stage and their reliance (protest?) of the bottles took on a more frenzied speed. The director wondered aloud at the meaning of the dance after it was over, speculating about whether it was a political commentary about water, then encouraged us to ask the dance company members at the close of the show. A four-year-old asked a baby how old she was, then tumbled away.

Following this piece, two companies performed duets: Dancers Seeking Refuge, then Emma Evelein dance & choreography. Both duets were beautiful performances, and though they both seemed like they were classic contemporary pieces (full of high extensions, moments of stillness, set to a thrumming, insistent score), the first duet felt noticeably more intimate, a conversation viewed through an apartment window.

Battery Dance, the flagship company of the festival, took the penultimate spot, with a dramatically longer contemporary piece danced under blue stage lights, the women wearing bright red tutus over bike shorts, black socks and a leotard. Like the costume, the choreography was clean and technically strong but courted a more daring impulse, which occasionally came through. The program finished with Music from the Sole, an ensemble piece that bridged tap with Afro-Cuban dance styles, musical accompaniment with the percussive performance.

There would be six more days of this free dance programming, concluding in a finale performance at Pace University. I hoped that the later evening performances integrated a more intentional program of performers, but the variety-show format of the festival, along with its international focus and span, likely provided complications. That, plus the original ethos of the Battery Dance Festival—begun after the scrappy dance company decided to set up an impromptu dance performance and Manhattanites coming out of their offices flocked to observe—probably limits what the festival organizers would want to ask of its watchers. But what do organizers think a wide range of audience members would want to see? And what does an “audience” want?

The way back home to Brooklyn provided me with some answers. A lady on her way to the Upper East Side flagged me down to talk about the program I was holding to fan my face in the 6 train station. She had just loved the Dancers Seeking Refuge duet (“do you think the dancers were … well it looked like something was happening there!”) and struggled with the Mezopotamya Dans piece, which she felt was overlong. She seemed delighted to talk about this show, which she hadn’t even expected—she just wandered by, saw something happening, and parked down on the grass for two hours, enthralled. We were joined by another woman traveling uptown, toting her very chill dog, who agreed on the Mezopotamya Dans performance (my favorite of the lineup) and copped to taking a few years of dance when she was younger. We talked until I reached my stop, and I found that my impulse to root out corniness and reach towards challenge had its limits. The afterimages I would have from this dance festival were as much the phenomena of people watching as those moving onstage: the train doors closing on two strangers talking about dance; a man in the audience shielding his face from the sun—a perfect “Serenade” simulacrum.

Next
The Ultimate Sacrifice