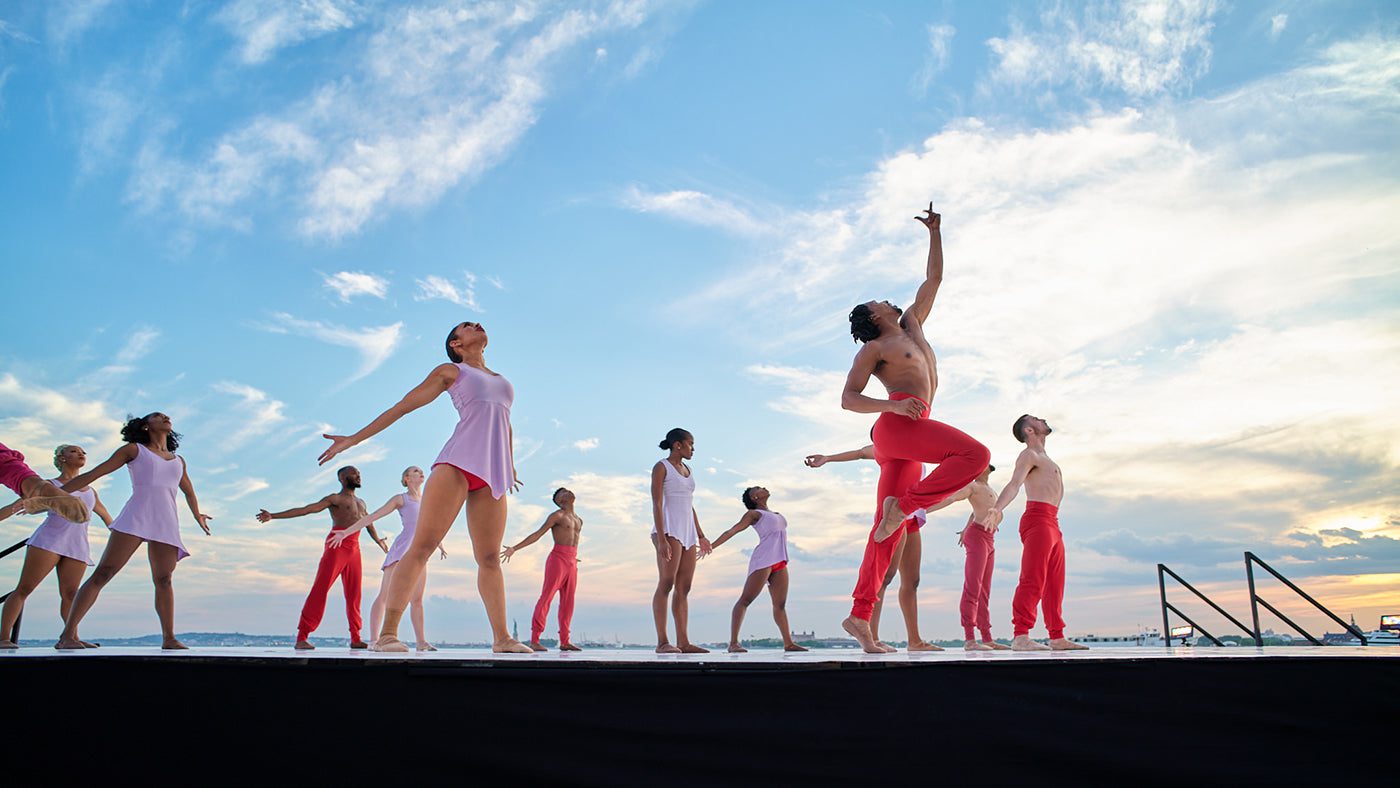 Under a Painted Sky

Battery Dance Festival’s closing night of outdoor performances harmonized perfectly with the sky. The festival celebrated its 41st anniversary at home in Battery Park City’s breathtaking Robert F. Wagner Park, and as the sun set, the sky turned from baby blue to pinks, oranges, and navy. Like the New York harbor which glistened from below, the five performing companies of the evening reflected this changing background remarkably, with costumes which coordinated with the natural color palette and movement that complimented the shifting backdrop of sailboats and seagulls.

“Face What’s Facing You” was a large group piece which highlighted the technical facility of the Texas-based company, particularly the dancers’ lovely high leg extensions and impressive turns. Described as “an honest, soul-stirring work addressing the facing of life’s challenges,” the piece uses a variety of literal sharp facings side and front to show transitions between relationships and individual struggles. It featured a series of duets and solo moments, focusing on one female soloist who was particularly strong and controlled in balances, battements, and turns. In ensemble moments, the company was powerful in both balletic movement and grounded contemporary work.

Following DBDT was a quartet by local company LaneCoArts, under the direction of Lane Giffords, whose piece “Swerve” explored relationships with the environment using audio from BBC World Service/The Real Story, among other compilations. Using radio content was an interesting idea, especially considering the current prominence of podcast and radio in entertainment media. Dancers sat at a folding table and used gestural movements to interact with the radio show, then proceeded to rise and explore relationships with each other and the stage.

The Dance Festival prides itself on two main things: being a haven for new work (this year included 20 premiers) and extending a global reach. The 41st festival presented 30 companies from all over the world who danced in a range of styles, both contemporary and traditional. (The festival also makes it a point to annually celebrate Indian Independence Day, dedicating a full day of performance to Indian Dance, which occurred earlier in the week, highlighting two leading Indian-American practitioners of the classical South Indian form, Kuchipudi.) In an effort to maintain such breadth, the festival occasionally sacrifices quality of work, with some original pieces falling to clichés or appearing underdeveloped. Overall, however, as a free festival which represents the globe in a gorgeous public New York City park, Battery Dance Festival really is the people’s dance festival, and it remains an important event that emphasizes global community and the common language of dance.

Two international companies followed LaneCoArts—Dos Proposiciones Dance Theatre from Spain, and Compagnie Virginie Brunelle from Québec. Between the two, i KADA, the Korean American Dance Association under the direction of Mee Jung, performed “Unfolding” by Associate Director Ae-Soon Kim. Six dancers in white tops and pants with blue, pink, and orange accents jumped, rolled, and slid on the floor. They stood up in a line, standing still and then exploding in multiple directions. They danced with fans and to the sound of the janggu drum, performed live by Youlmae Kim. Encompassing both their own mission and that of the entire festival, “Unfolding” mixed traditional aesthetics with contemporary movement and sounds, and as with all of the companies of this evening, was framed beautifully by a sparkling horizon and a painted sky.

Next
Ashton in New York