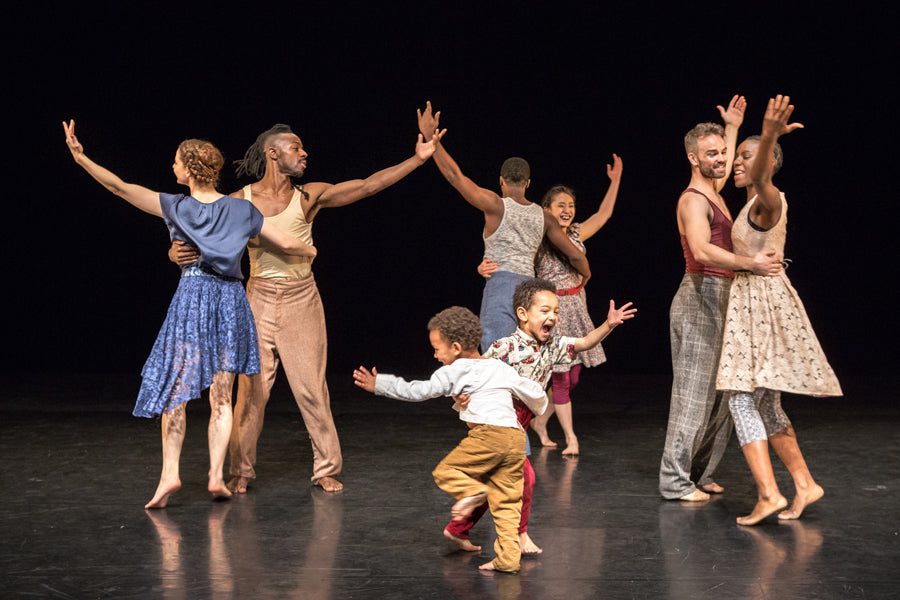 Glasgow’s Barrowland Ballet have long explored the nuances of human interaction with style, grace and humour. The company often work with those from different backgrounds and age groups, and their own professional dancers are absolutely superb. Whiteout is definitely one of artistic director Natasha Gilmore’s most intimate projects, as she was inspired by creating a humane piece which speaks to her own inter-racial marriage. Speaking in an interview in The List in 2015, she said to writer Kelly Apter, “This is one of those pieces I felt compelled to make . . . So I started to identify the common shared experiences.” It is a culmination of collaboration and stories from the cast, as well as Gilmore’s friends and families.

There are fists clenched in violence and hands held in tenderness; confusion and clarity, the work of adults and spontaneous play of children, with both dreamlike and lucid choreography. The costumes range from hoodies and sweats to vintage jazz era dresses, starched shirts and trousers.

So, too, the movement never rests on any one theme for too long. Genres are spliced, in a series of little vignettes. Balletic jeté melts into jazzy cakewalk struts, which gives way to explosive hip-hop tumbles, flexes and floor spins. Since there is no linear narrative here, it means that the choreography feels like a collection of snapshots in a personal photograph album, made flesh. It’s all just like life ramped up in all its chaotic, dizzying glory. Racial tension and everyday rivalry is dissipated as communication develops. One sequence sees them portraying ‘gang members,’ crashing to the floor, only to use British Sign Language as they lie with legs hoisted up. Pairwork is raw and athletic, becoming sensual, as the dancers emulate the need to love, and be loved. In spite of the scope, it never feels disjointed or confusing.

Composer and musician Luke Sutherland’s beautiful soundtrack is an eclectic mix of styles and moods. It goes from elegiac strings and piano in a minimalist, Steve Reich style, to drum ‘n’ bass, electronic music and jazz, and in one affecting moment, dancer Jade Adamson sings a cappella, slowed down, the tongue twisting folk wedding song, “Mary Mack:” “We’ll all be mackin’ merry, when I marry Mary Mack.” She seems uncertain, rather than blushing bride-to-be, with a meditative air. This briefly breaks the dynamism, creating an unexpected poignancy and stillness.

Suddenly, two small children appear onscreen (Gilmore’s own little boys) and are supported by the ensemble. They’re like an extension of the dancers’ limbs, and as they’re hoisted onto backs, the adults are reminded of the freedom of play, the joy of living in the moment, unencumbered by the responsibility of paying bills and running households. They start to race around as children do. But Gilmore’s work defies any kind of twee or cutesie categorisation. It is capricious and unpredictable. It disarms the viewer, as it carries the energy of improvisational ideas—and as it races to the finish, it all explodes into a huge, joyful ceilidh, with the whole ensemble birling* and whirling, arms raised in euphoria. They ultimately form a kind of human fortress, becoming a symbol of strength and resilience. This is dance as a tool for understanding, as a means for disseminating information and sharing, for feeling emotions and spreading compassion. It’s an intoxicating finale to a film which evocatively captures the fire, frenzy, fragility and fearlessness of Barrowland Ballet.

*Old Scots, to turn energetically, as in dance.

Next
The Sweetest Witching Hour