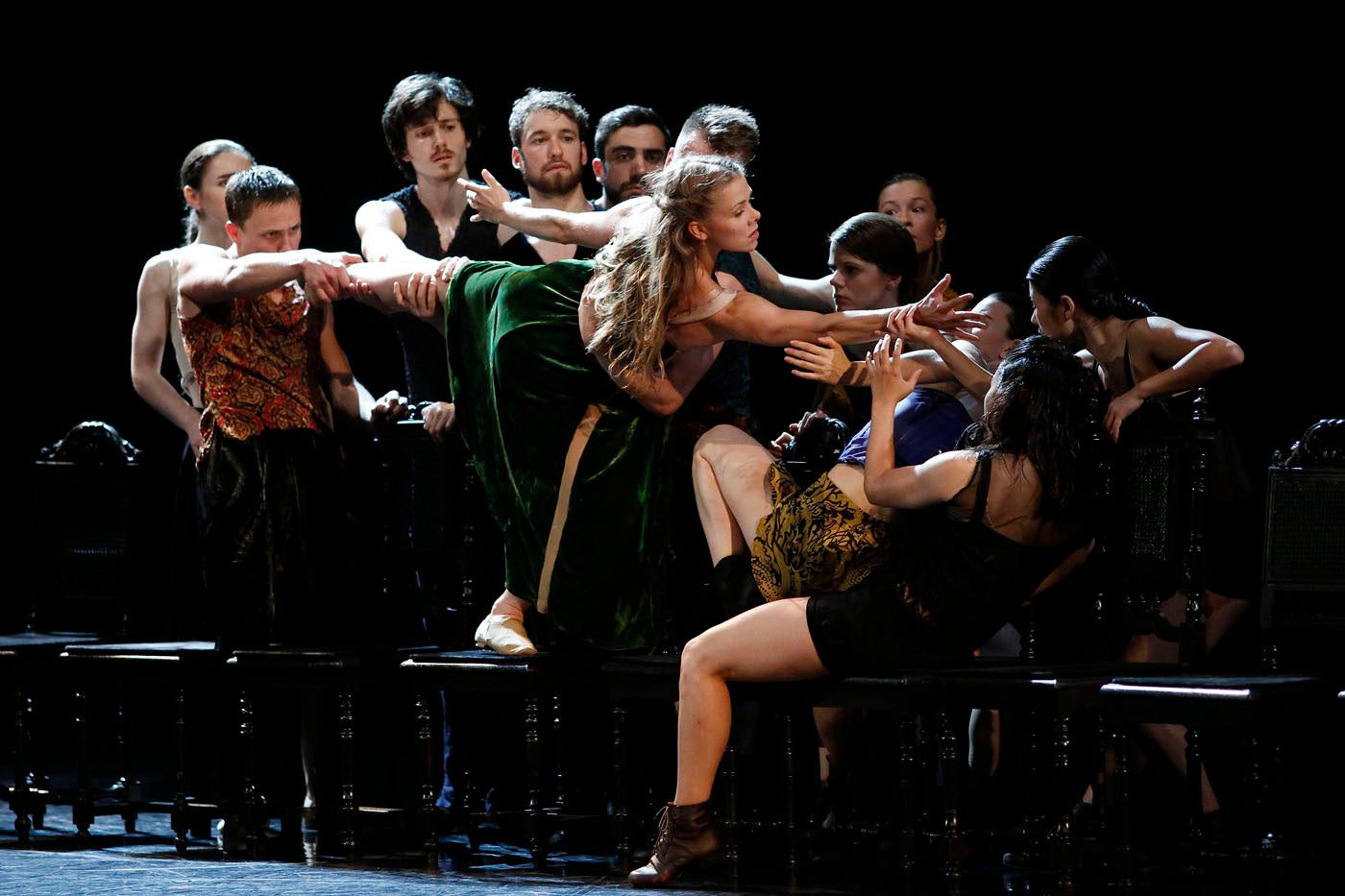 Baltic Dance Theatre, the resident company of the Baltic Opera, Gdansk, is one of the largest contemporary dance companies in Europe with an internationally diverse body of 24 dancers. Despite being a relatively young company (BDT was established in 2010), they have already built a substantial repertoire of work, the majority of which is created by BDT’s Artistic Director, Izadora Weiss. A former dancer, Weiss choreographed extensively for opera prior to her appointment as director of the Gdansk Ballet at the Baltic Opera. Under Weiss’ direction the company moved towards a more contemporary style, and in 2010 BDT was formed. With their prolific output of work it appears that Weiss has a bold vision for her young company, perhaps something akin to that of Nederlands Dans Theater. Indeed, Weiss has been mentored extensively by Jiří Kylián, (artistic director of NDT) and some of his classic works are now a part of the company’s repertoire, alongside pieces by choreographers Patrick Delcroix and Wojciech Misiuro.

Since 2010 Weiss has continued to build a strong body of work, including a version of “A Midsummer Nights Dream” which was nominated for Best World Premiere of 2013 in Dance Europe magazine. Her work often has a narrative approach and it seems that Weiss is not afraid of taking a well known work or story and reinterpreting it in her own style. In some of these she takes the opportunity to address social issues. Her version of Stravinsky’s “Rite of Spring” sees women fighting back against sexual abuse, a new take on the work’s sacrificial and ritual themes, while her interpretation of “Romeo and Juliet” (made in the year prior to the formation of BDT) relocated the famous love story to modern-day northern Iraq.

Across her work it is music that acts as the driving force, with Weiss citing music as “the inspiration for all my shows.” Her musical scores are often a compilation of a composer’s work, arranged by Weiss herself, alongside her own compositions. In Weiss’ version of “Tristan and Izolde,” her latest work for BDT, it is not Wagner’s score we hear but a compilation of the Polish composer Krzysztof Penderecki’s work combined with contemporary variations by Radiohead’s Jonny Greenwood.

For her reinterpretation of the unfortunate love story, Weiss chooses to focus on Tristan and Izolde’s all-consuming passion, on the tragedy of two lovers fated never to be together but who cannot find happiness apart. She eschews the backstory and opens with the moment aboard ship where Tristan (Beniamin Citkowski) and Izolde (Anita Suzanne Gregory) share in the fateful love potion. They do not drink in atonement (in Wagner’s opera Izolde insists Tristan drinks atonement for the murder of her fiancé, not realising that her maid, Brangäne, has switched the poison for a love draught) but by mistake, Tristan offering the thirsty Izolde the love potion intended for her marriage to King Mark, whom Tristan is charged with bringing her to.

Three blue screens sail on to stage, a simple set-design that suggests their arrival by ship. This simplicity of set and lighting continues through the work; Piotr Miszkiewicz’s design creates a vague idea of a scene, but it is left to Weiss’ choreography, and Penderecki’s evocative music, to bring the story to life.

For the most part Weiss achieves this and there are moments that shine with the potential of this young, strong company, but at others the narrative loses its thread and structurally it feels that, in this latest work at least, Baltic Dance Theatre are still developing their voice.

Weiss’ greatest skill lies in the quieter moments, where duets and trios unfold the story. An early pas de trois, as Tristan helps Izolde in her first encounter with King Mark, hints at the intricacy Weiss can achieve in her work. Passed between them, Izolde’s anxiety, reluctance and sadness as she finds herself partnered by King Mark lies in contrast to the way she softens at Tristan’s touch. Although brief, it’s a moment where choreography and characters come alive, giving us a glimpse of the emotional drive behind Weiss’ choreography and the very human desires that lie at the heart of this piece.

These gentle moments are set against the presence of an ever-watchful, suspicious court. Two dancers (Sayaka Haruna-Kondracka and Min Kyung Lee) play the role of an evil spirit, from which Izolde’s secret cannot be hidden. Dressed in black they act like furies, rippling creature-like around her, silent but knowing. The company echoes the threatening tone of this duo. As Penderecki’s score crescendos, the strings full and heavy, Weiss’ choreography likewise shifts its dynamic. The company dance together, a cluster of bodies moving in unison. Using heavy, grounded movement they shift through deep plies, rushing forwards in an aggressive onslaught of movement. The group gathers close to Izolde, leering and swaying as if they can sniff out her secret.

Although a menacing presence, this close packed crowd, moving in a manner reminiscent of Hofesh Shechter’s style, feels an obvious image to use. Seen once it would have been interesting enough, a clear, accessible way to convey the threat Izolde faces. Yet it’s a motif that recurs each time the music builds and in this the structure of the work becomes predictable, teetering dangerously close to monotony.

In a work that has some moments of real beauty, of subtle and sophisticated choreography, the recurrence of this unoriginal image breaks the delicate magic such moments build. It feels that Weiss needs to find a less intrusive way to incorporate the rest of her company and at times there are glimmers of such possibilities. Occasionally the stories of other characters play out at the peripheries while the main action continues centre-stage. It’s a little used idea that has intriguing potential and, on this occasion, it would have been interesting to see Weiss develop her group sections with a sensitivity similar to that seen in the duets of “Tristan and Izolde.”

There are points too where the plot seems superfluous. A male-male duet between Tristan and Kaherdin (Sigurd Kirkerud Roness), whom he encounters on leaving the court, feels less essential to the story and more an opportunity to indulge in movement. It’s hard to see its necessity, if only to introduce a second Izolde (Izolde of the White Hands, given by Kaherdin as a wife to Tristan in gratitude for saving his life), an encounter that emphasises that neither lover can find happiness without the other. Beata Giza, who featured in Weiss’ acclaimed 2015 work for the company “Phaedra,” dances this role. A technically accomplished dancer, it’s a pleasure to watch Giza perform, but the interlude is a confusing addition to the narrative, especially so far in to the story.

However, this interlude leads to one of the strongest moments in the work. A darkness builds in the music, juxtaposing rhythms smoothed over by strings, and a trio of duets commences—Tristan and Izolde of the White Hands, King Mark and Izolde and Brangäne and her lover Gorvenal. As the movement of each couple evolves a mature and detailed expression of their emotions emerges. Tristan and Izolde’s unhappy passion is set against the unrequited love of their partners King Mark and Izolde of the White Hands while, soft in the darkness upstage, the true and unforced love of Brangäne and Gorvenal plays out. As they dance, the couples catch at moments in each other’s partnering before their movement returns to the world of their own relationships once more. Here is a moment of sophisticated and emotive choreography—a carefully constructed image of the varying visions of love that lie at the heart of this story.

Moments such as these carry the work. The closing image of King Mark, placing the bodies of Tristan and Izolde into position as he unites them in death, is the ultimate expression of forgiveness. It creates an ending that is more poignant than the quiet moment of the tragic lovers’ deaths.

Weiss casts her dancers in their roles before creating her work and this opportunity for the company to share in her vision results in a cast which seem inherently suited to the characters they play. The understanding they have of their characters shows in the detail of their movement and their finely tuned emotional expression. As a result the soft, narrative moments of “Tristan and Izolde” are filled with emotional depth and beauty.

“Tristan and Izolde” is accompanied by “Death and the Maiden,” a work first performed in 2013 and, although much shorter, it exhibits similar choreographic traits.

A steady pounding beat echoes in the darkness. As the curtain rises a cluster of men appear, the rhythm of their heavy footfall the soundtrack to their hunched, thrown movements. Music begins to filter into the rhythm of their steps and a woman dressed in black, her hair bright red, enters. She sidles between them, selecting partners to engage in duets of brief rolling lifts.

Visually, it’s a strong opening but presented next to“Tristan and Izolde” the structural similarities are particularly noticeable. The maiden; young, petite and faun-like, her movement filled with quick steps and shimmying actions of her torso, dances with red-haired death, who exudes danger and sexuality (danced by Emma Jane Howley and Agnieszka Wojciechowska respectively). Their technical, emotionally driven movement builds an engaging narrative, yet, as in “Tristan and Izolde,” this developing story is broken by a rush of heavy, powerful group work. The strong masculinity of the group movement lies in direct contrast to the elegance of the narrative moments and, once again, the transitions feel abrupt. It’s a clear, simple way to structure a work but this set-up perhaps offers too simplistic a portrayal of masculine and feminine energies and, as a result, it feels as if the true potential of this work has been held back.

It’s clear across both works that Weiss excels in creating succinct duets and trios of poetic, inventive movement. While this doesn’t necessarily filter into her sections of unison it remains a pleasure to watch this company of young, engaging performers. All are technically strong and it’s refreshing to see that there is no defining uniformity between the dancers. Each maintains an individual way of moving that adds a disarmingly human touch to the performance. Their expressive movement and their absorption in the characters suggest that these dancers are at one with Weiss’ vision and, combined with an ever growing repertoire of work, there’s reason to believe that Baltic Dance Theatre are a company to look out for.