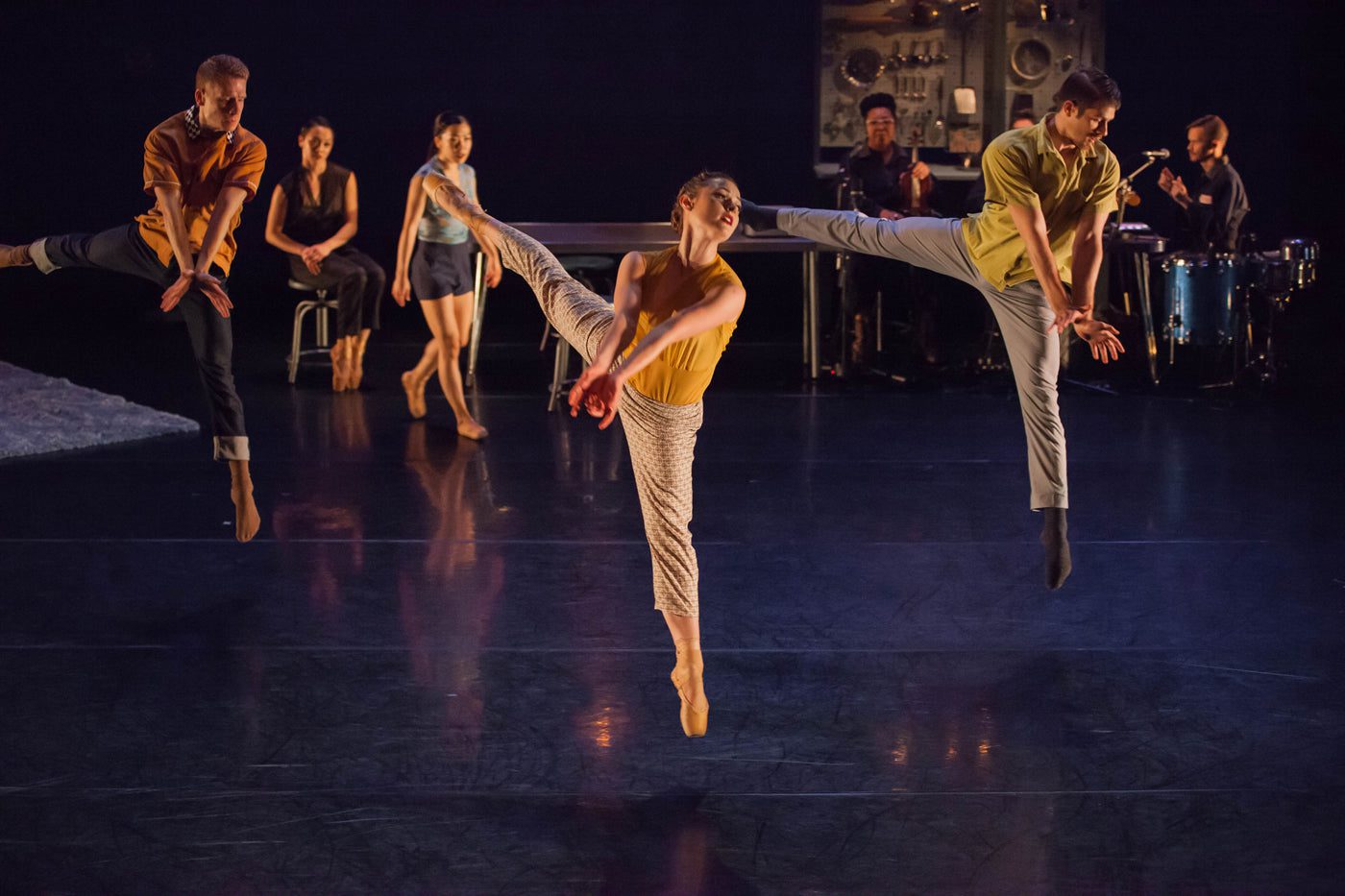 BalletX’s Summer Series 2018 programmed three easygoing world premieres at the Wilma Theater last week. With comic moves here and there to classical music, and gestures at more serious themes, except for Penny Saunders’ “Rock-a-Bye,” there was not much to overheat the packed audience during these sultry dog days.

Each work had its subtle intricacies and that underscored the vocabulary of each choreographer, allowing the company to display its versatility.

Andrew McNicol, a London ChoreoLab Project tyro and Kenneth MacMillan Choreographic Award winner in 2008, is BalletX’s 2018 Choreographic Fellow under this year’s mentor Matthew Neenan. To selections of Mozart’s unfinished Requiem, he uses the Sequentia movement three times. This brilliantly elucidates the series of enchained groupings the company makes, arm over arm in jagged lines or V formations, with some dancers kneeling, others lunging or twisting away, yet remaining connected.

Stanley Glover made an imposing BalletX debut, while newcomer Anna Peabody eased into the company in this piece. But the tall Glover, in skintight, sleeveless white body-length leotard (costumes by Mark Eric) became its central figure. Dueling with Zachary Kapeluck, he slips an arm around Kapeluck’s neck as Kapeluck nimbly twists away. Four couples dance a celestial moment, while Francesca Forcella walks ghostlike behind a scrim, already in the beyond? It seems not, as she and Glover swirl romantically in an agony of loss. The dancers form a pyramid for Glover to ascend over them towards the eternal light—the Lux aeterna closing section. This literal ending is a bit jejune, but emotionally affecting.

As props, chairs are nothing new in dance theater. Martha Graham used one in her “Lament,” David Gordon and others at Judson Church used them in the 60s, and who can forget Ohad Naharin’s “Minus 16” where the chairs create a space for the dancers to conjure the Holocaust and the joyous, if treacherous, aftermath of the founding of Israel?

Seated onstage, Martha Koeneman, principal pianist for Pennsylvania Ballet, performed Mendelssohn’s Songs without Words to Matthew Neenan’s “Situated” a sleepy-time affair with eight dancers and as many chairs. As in McNicol’s and Saunders’ pieces, the women wore pointe shoes. But under Neenan they are merely another prop. I am not sure I ever saw one go higher than demi-pointe, yet they had to have a meaning because Neenan is deliberate about every detail. In two-piece jammies with jogger pants (by Reid & Harriet) they look like a sleepover party. Neenan toys with the children’s game of Musical Chairs, but coyly doesn’t actually go there. A nostalgic atmosphere permeated the work with Gary W. Jeter II, who gave us unforgettable partnering in last spring’s run, and Daniel Mayo, in farewell performances. The deft chair dance by Mayo who landed neatly on the upended chair was bittersweet. Mayo has a quality that always reminded me of Neenan’s dancing—effortless, nonchalant—a quality that added a piquant element to the ensemble dancing. He will be missed.

Neenan ends with a pile on of chairs that the dancers remove like almost like Pick-Up Sticks. Glover starts the game and Kapeluck ends it, sitting on a chair, hand on chin and facing the audience. He’s asking, “What’s this all about?” And we would too, except that we always like to be situated in Neenan’s toybox.

Finally, “Rock-a-Bye” is choreographer Penny Saunders’ dance theater piece. The set suggested an Edward Hopper moodiness, with low-lit living room and long kitchen table where the musicians sat on the far end. The original live music created by Rosie Langabeer, Tara Middleton and Gregg Mervine cannily matched the mood. Behind them, a wall of analog clocks gave the tick-tock theme to this alternately warm and tense family drama. Martha Chamberlain costumed the full company in street wear. It welcomed back the ever-enigmatic Chloe Perkes from injury in a role that seems to cast her as a mother or big sister to Quan and Yorita. Couples slow dance dreamily to Langabeer’s R & B songs and tunes; three dancers swing side to side like pendulums; the women pop up in attitude sur la pointe, or scissor their legs en l’air. The music slows to a mournful heartbeat as the light fades.

Although each work displayed significant choreographic authority, perhaps their similarities would not have worked on a wintry program where a more alert audience might have expected more challenging concepts. BalletX has carefully cultivated its audience, which gives back loyal, enthusiastic support. Yet knowing many of them, I suspect the similarities in recent programs may wear thin. Contemporary ballet ought to live up to BalletX’s mission to create cutting edge work. Why else end with an X?