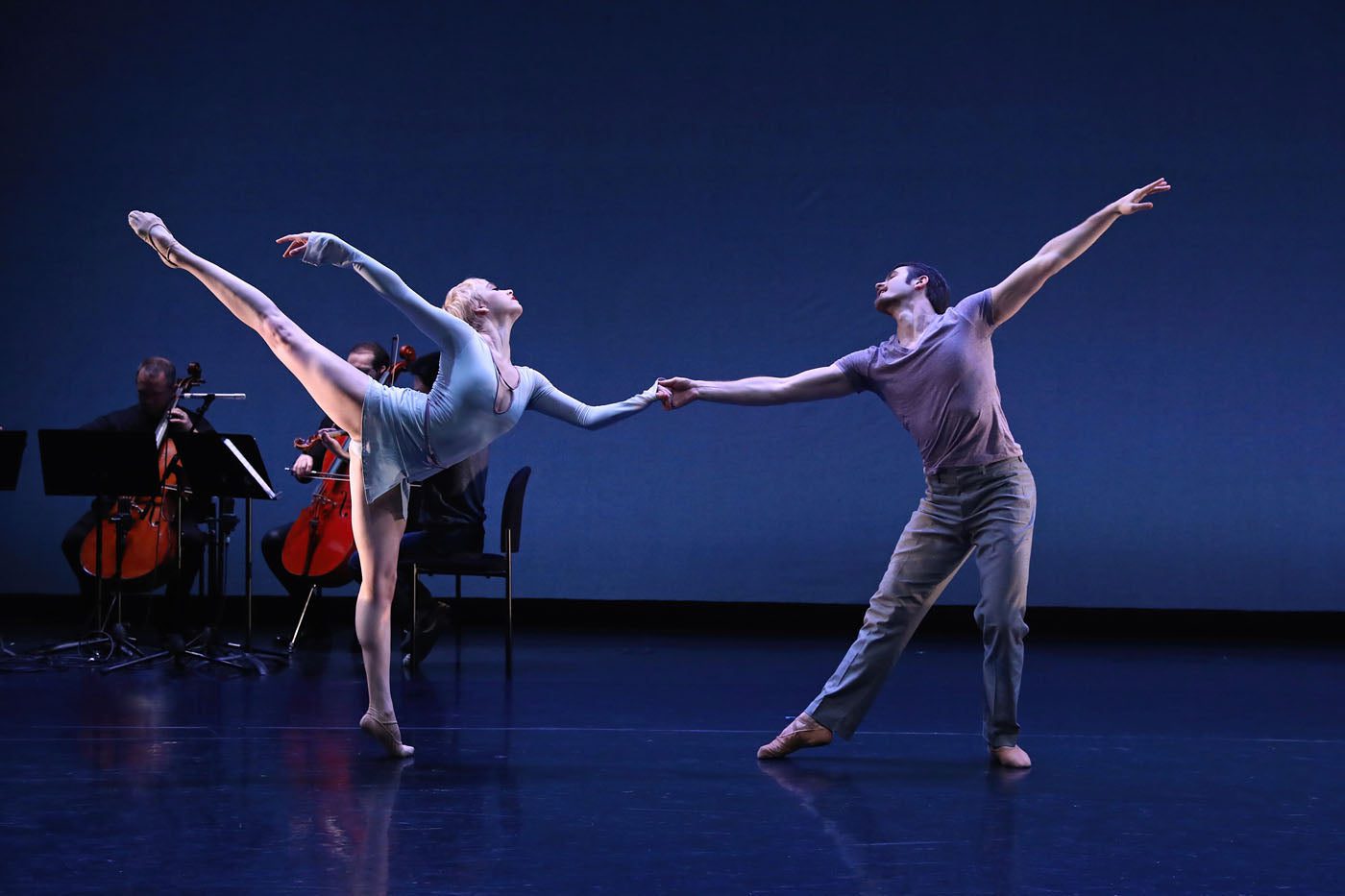 If ballet were an Olympic sport, BalletX’s Andrea Yorita would be taking home the gold for her performances in the company’s spring series at the Wilma last weekend. She dazzled in Matthew Neenan’s “Increasing” and Trey McIntyre’s “The Boogeyman.”

Though this company of dancers outshone itself throughout with stellar performances by all, the program was not as thoughtfully wrought as previous ones over the company’s ten plus years.

In the two world premieres, “Vivir” and “Boogeyman,” pop music drove the Latino-flavored and disco dancing from the 70s and 80s. The songs seemed easily recognized by the seniors in the audience and, I hope, gave a glimpse of the dance crazes of the past to the youth in the audience. But for me, each was too episodic and lacking in tension or frisson.

The show opened with “Vivir,” by Darrell Grand Moultrie, a shoulder shaking kind of “West Side Story” en pointe without much bite. Grand Moultrie’s gorgeous “Differences in Sections,” which premiered on BalletX in 2012, proves, among others of his outstanding works, that he can choreograph for a ballet company. He creates some vivid heart melting tableaux and imagery among the dancers and I would rather have seen a reprise of that work than “Vivir,” at least on this program, which needed a more varied mix.

There were heart stopping moments that illustrated Grand Moultrie’s movement sketch, but otherwise it’s what you’d expect from a ballet based on tunes from the Spanish Harlem era. Recovered from her injuries of last year, Skyler Lubin, in pink, (costumes by Mark Eric) esses her torso on and offstage maneuvering high on her toes as if on spiked heels at a dance party. Francesca Forcella pirouetted like a Christmas ornament dangling under Daniel Mayo’s sure hand. Caili Quan made her series of entrechats look Latin flirty.

I’ve been watching Trey McIntyre’s work since at least 2002 when I saw his romantic “Blue Until June” mounted on the Washington Ballet to songs by Etta James. In 2004, BalletX co-founder, Christine Cox, while still dancing for Pennsylvania Ballet, dramatically opened “Blue Until June” on that company. Despite opening night glitches, when the PAB presented McIntyre’s “Peter Pan” in 2012 starring Alexander Peters, it ultimately became a smash hit. A couple of years later, David Parson’s company danced his lovely duet “Hymn,” at Annenberg, as part of Randy Swartz’s long-running series there. And who could forget 2016’s “Big Ones,” McIntyre’s quirky paean to Amy Winehouse’s songs? I could.

That aside, dance audiences here are familiar with his work and he has many fans, including me. His “Boogeyman” gratified. It opened with Roderick Phifer listening to 70’s songs from Marvin Gaye to Stevie Wonder to Earth, Wind and Fire. Phifer rocked the house with solos that went from freewheeling to tightly controlled. He partnered Yorita, on, off and under the rollaway bed that also functioned as a telephone wall for Yorita to hang herself from when she gets bad news, presumably from a boyfriend. Before her demise, they perform some daredevil gymnastics around the bed. For me, the line dancing, which gave everyone a chance to bring something to the party, worked best. I love doing the Bump and so did Richard Walters and Zachary Kapeluk, looking like disco-kings.

In the middle, Neenan’s 2014 “Increasing” was a soft ballet slipper piece, with the cast all in powder blue. The dancers moved a beat beyond the tempo of part of Schubert’s String Quintet in C Major played live onstage.

Subbing for Chloe Perkes (nee Felesina) on the injured list, Jenny Winton burst onto the stage like a sailing ship’s prow slamming into a hard wave. She disconnected two handholding dancers by jeté-ing between them and nearly stole the show with her powerful stage presence. But not to be outdone, Yorita plowed across the stage on the diagonal into Gary W. Jeter’s waiting arms for a perfectly perpendicular throw triple twist of great height. By the time Jeter made it to stage left, she barreled across to him, fists clenched, and they did it again!

This program may not have given me much brainfood, but it was just what the body and soul needed to get moving in all this Stormy Weather.