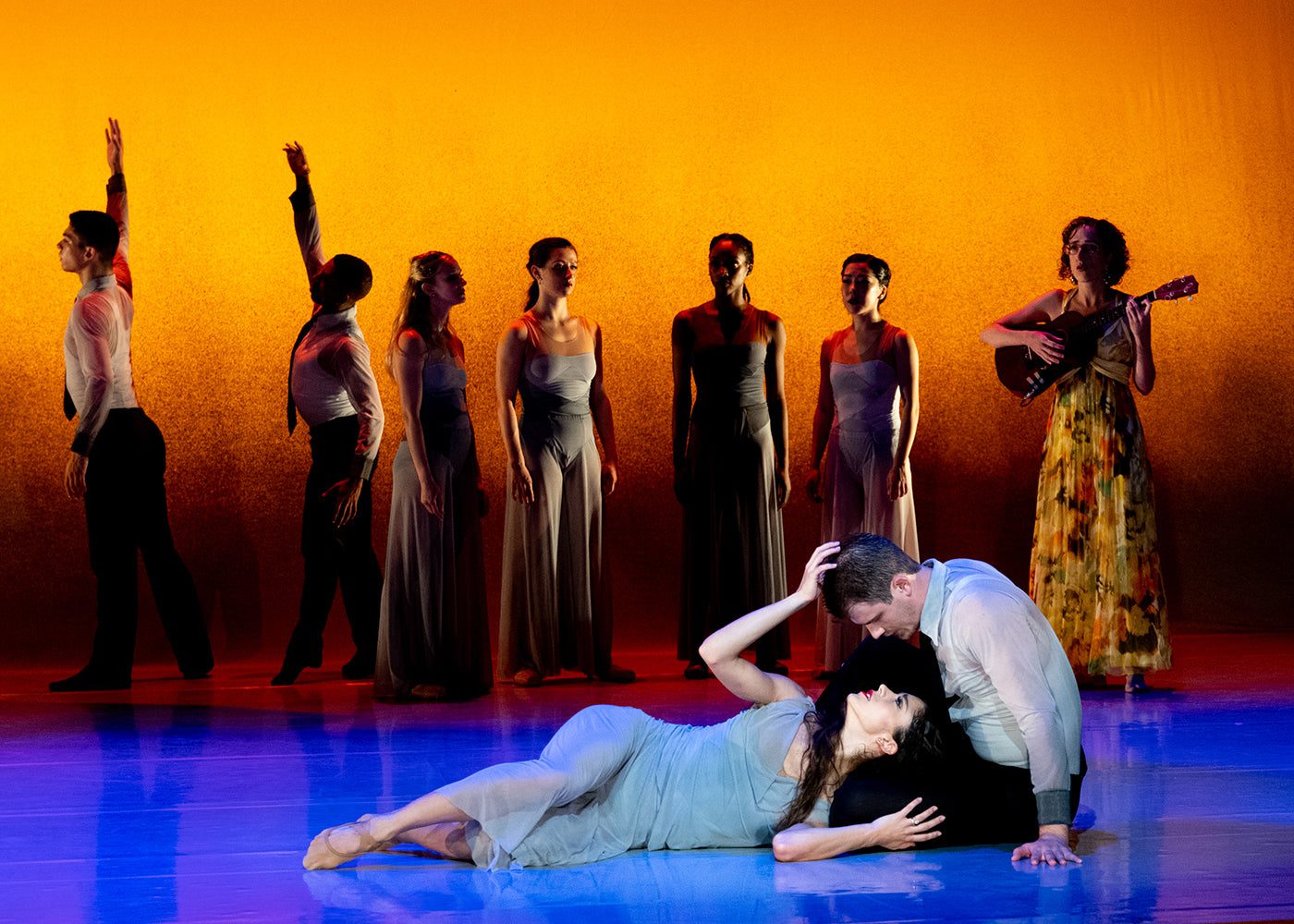 Pago Pago, Samoa, January 11, 1938: Pan American Captain Edwin Musick piloted the inaugural airmail flight from Hawaii to New Zealand in December 1937. Beginning the return flight to Honolulu and home to Seattle, his plane caught fire, exploding midair. No remains of the seven onboard were found among the wreckage located later that day. The previous year, Amelia Earhart disappeared over the Pacific along with navigator Fred Noonan who had earlier navigated the China Clipper on its first flight between San Francisco and Honolulu, piloted by Musick.

This bit of history may be unfamiliar, but it’s the inspiration and essence of Matthew Neenan’s 2014 “Sunset, o639 Hours.” The title, Neenan said in a pre-curtain talk, was taken from one of the impatient comebacks Musick used in response to the often-vapid questions of reporters. The evening-length story ballet premiered in 2014 at the Wilma Theater, commissioned by Philadelphia’s BalletX in collaboration with composer/musician Rosie Langabeer and reprised this year.

No doubt, New Zealander Langabeer was keen to work on this piece for its historical significance to her home country. In the premiere run she was the nightclub singer and accordionist. Grounded now in New Zealand by Covid, musicians, Josh Machiz and Isaac Stanford and vocalists, Alexandra Day and Tara Middleton stepped up, their voices climbing into the stratosphere. They comprised the onstage “Sunset Club” band harmonizing in heavenly choruses from Swing to Latin and Island rhythms which included odd instruments called Magnapooters and Anaplumb designed by Neil Feather.

In 1935, the early days of commercial flight, Musick made the cover of Time Magazine. It takes a strong dancer to follow in the footsteps of a heroic figure, but Zachary Kapeluck is perfection in the role. Musick was famously laconic, and Kapeluck performs his character with unflappable boldness—clearly the leader of the company of characters, yet still a part of the crew. Indeed, the opening scene has all ten dancers spaced in the shape of a plane, arms churning propellor-like, as if they were one engine.

As in his previous narrative choreographies, Neenan’s scenes flow into each like chapters in novels. The dance styles echo the rhythms of each episode’s moment. Island dancers in flowing flower-colored skirts (all costumes by Christine Darch) sway their wrists and hips without attempting authentic Maori or Polynesian movement. On New Year’s Eve swing, and other social dances accent the balletic footwork of the gowned women stabbing the dance floor in pointe shoes. Kapeluck leapfrogs over Francesca Forcella, legs in straight horizontal split. They all take the floor in that zippy, carefree way that would soon be destroyed by what was to come in WWII. I saw Neenan’s Pennsylvania Ballet debut, (now Philadelphia Ballet where he is resident choreographer) as Paul Taylor’s “Boogie Woogie Bugle Boy” in the ‘90s. Ever since, I’ve felt he has an affinity for that era. He comes back to its music, fashions and mannerisms now and again.

In the smaller Suzanne Roberts Theatre, this second reading of “Sunset” looked more cohesive. Perhaps because BalletX toured it around the country over the years, most recently at Vail Dance Festival. With many of its original company dancers looking at home in the work, newcomers Blake Krapels who joined in 2018, Shawn Cusseaux (2020) and Jonah Delgado (2021) added a bit of needed frisson to the work. Maiko Matsushima’s stunning Calder-like sculptures, lit like sunsets by Drew Billiau, float across the stage and out over the audience like paper airplanes or the letters that float down over us near the end.

Under them, Krapels solos, torquing his body and limbs like a plane shivering apart, then falling to his knees and swiftly rising vertically. In the bird section, the cast sits in an aboriginal circle slapping their thighs and chanting. They begin the bird dance to recorded songs of New Zealand’s many native birds, twitching limbs and goose necking. Cusseaux imperiously cuts through them fists at his waist and high-stepping legs thrust out like spears.

Ashley Simpson and Savannah Green are fairly new and wonderful additions to the company, joining during the height of Covid. Green reminds me of BalletX co-founder (with Neenan) Christine Cox in her days at Pennsylvania Ballet and was a standout throughout the show. Long-time BalletXer, Francesca Forcella takes the role of Chloe Perkes, audience favorite for many years, who retired this year after sticking it out through the company’s long and valiant swivel to filming dances throughout 2020. Forcella is a strong and elegant dancer and has been popular as well. But Chloe filled our hearts with such delicacy as a dancer we will always keep her there.

The dance ends with letters like wreckage flying down over the audience and one last duet between Musick and his wife as she reads his last letter.

Is it too sentimental? I found it so in 2014. But we are all different now. Seeing the veteran dancers like Andrea Yorita and Skyler Lubin, as well as the new members, in this return to the theater with Neenan’s achingly beautiful work and made me feel a sense of continuity, of the gravitas of what the world has been through. And how resilient we are as artists and human beings.