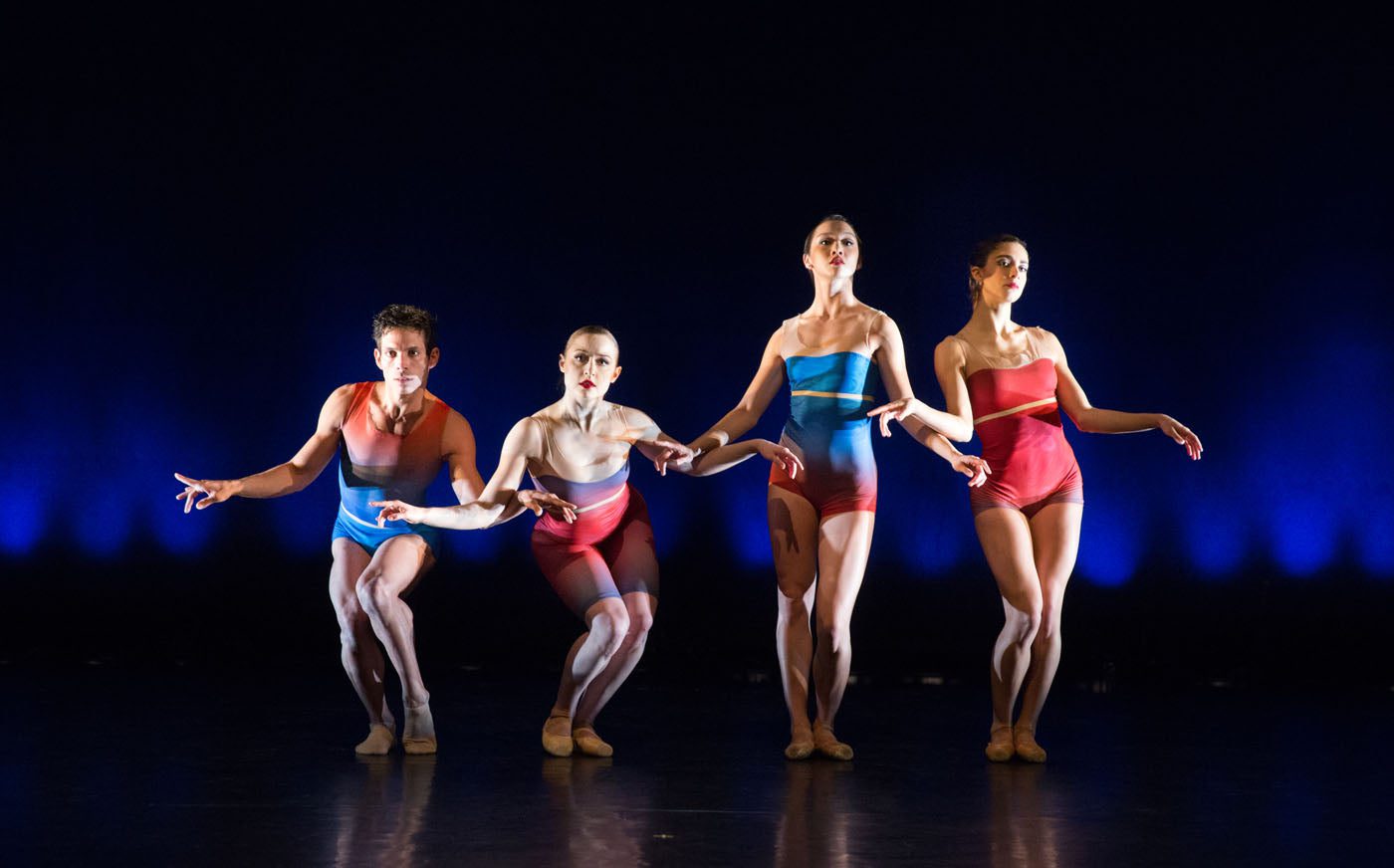 Getting Back To Black

BalletX at the Joyce Theater

In Ernest Hemingway’s 1926 novel The Sun Also Rises, protagonist Jake Barnes describes the work of a veteran bull fighter. “It was not brilliant bull­-fighting,” he says of a match. “It was only perfect bull­-fighting.” Once, this competitor wowed crowds in the ring with daring tricks and unparalleled passion. In this late stage of his career, though, these same movements seem slick and staged. He wins his matches—but he does not win over his audience.

At BalletX’s first week­-long engagement at the Joyce Theater, the Philadelphia company highlights this distinction between brilliance and perfection. The three pieces in the program are technically savvy and feature some provocative steps and sequences. But the performance progresses so seamlessly and the choreography is so consistently “perfect” that it runs the risk of being too polished.

The performance begins with an edge. In the first moments of “Show Me,” a 2015 work from BalletX co-founder Matthew Neenan, the company’s ten dancers navigate the stage for a silent tableau. One dancer traces an imagined skyline with his index finger, a second bites her hand, and others clasp their palms at their hearts or cup them to their mouths. They are rigid, and they make the sparse stage seem like a vast tundra: cold, unwelcoming, and isolating.

Then, the lush chords of string quartet Brooklyn Rider begin, and the dancers flow. A male and female dancer kiss. Two men pair off and mirror each other’s motions—they are stilted, still, but playful, especially when their limbs unlock and flutter. This contrast between silence and sound, limited miming and full-bodied movement, is refreshing. And yet the piece does not sustain this building tension.

Instead, it slips into a revolving door of sleek group scenes. In one of them, four dancers in pink perfect their Charlie Chaplin wobbles and tip imaginary top hats. They are the vaudevillian Pucks of the piece: impish, mischievous, and comedic. They paw at each other and shift their weight from one leg to another. But even though they convey a sense of humor and spontaneity, their every move is meticulously staged. In another scene, two dancers in teal share a tight pas de deux in silence, then depart the stage on opposite wings.

These sequences are clean, but somewhat disparate. They lack the knottiness and grit to propel the piece from one scene to the next—or towards some payoff or resolution. This dynamic is evident when two groups of dancers struggle to share focus on stage. When four dancers in royal blue move in the foreground, they are lithe and strong, and the meticulous Andrea Yorita in particular commands attention. Behind them, though, the Chaplin dancers vie for the audience’s gaze. Both groups could individually sustain the audience’s attention or engage one another; on stage together, though, they seem to perform separate pieces that happen to be transposed over each other.

Again, “Show Me” has all the elements of a “perfect” piece: wit, consistency, and a skilled set of dancers among them. And a work does not have to have an overt, roiling conflict for it to be satisfying. But the piece feels safe, and contrasting Neenan’s light, comedic moments with choreography that threatens this tone may have actually bolstered the work’s sense of play.

“Gran Partita,” the 2014 work from frequent BalletX collaborator Jorma Elo, corners itself in a similar way. Set to classical music from Bach, Mozart, and Monteverdi—among others—the abstract piece is smooth even when it teases tension. It begins with a pool of light on the right side of the stage. Yorita, again extraordinary, steps out with her back towards the audience, crouches, stands up, and walks off the stage. And then, out of silence, comes music, then movement. The dancers pair off, then huddle in a triangle at the left of the stage. One of the men steps out of the group, alone. This nine versus one formation recurs throughout the piece, but again, the dancers’ cycling on and off the stage can be dizzying. Elo seems to seek dynamism as he moves from one sequence to the next, but within a single sequence, speed and softness dominate.

The most pitched moments in the piece arise when Yorita and a male dancer partner up. He at first tends to her when, again, she crouches in the pool of light. They tussle as the other dancers move savagely to the plucky music; he pushes her and tries to clasp his arms around her, but she slips from his grasp. She uppercuts him, brings her hand down on his head, and fixes his arms in a crucifix. This pair conducts itself in sharp contrast with another couple whose dynamic is gentle and supportive. The man beholds his partner with curiosity and lets her rest her foot on his shoulder; they trace each other’s muscles and mold each other’s limbs. She ultimately wraps her fingers around his skull and, in a callback to the previous pas de deux, fixes his frame in a cross. He carries her off the stage. Moments later, they return for another extended, slightly faster pas de deux.

These two sequences are technically precise and emotionally resonant, but they again beg the question: is it enough to be pleasant? Other than Yorita and her partner’s sharpness, the piece relies on regal, romantic moments to prop itself up.

The same cannot be said for the program’s closing piece, Trey McIntyre’s “Big Ones.” The 2016 work, set to Amy Winehouse’s record Back to Black, is slinky and rough, romantic and fun. Chloe Felesina commands the stage throughout the piece as its protagonist—and an imperfect one at that. This distinction is significant: it is rarer than one might think for a woman—on stage or screen—to play neither a girlfriend nor a victim. Felesina falls somewhere in the middle, and her movement is all the more fascinating because of this. She latches onto and then discards male partners, and she lurks in the shadows while she watches one companion navigate the stage with another woman. Lighting designer Drew Billiau and costume designers Reid Bartelme and Harriet Jung enhance this work’s sense of theatricality and drama: the dancers all wear tight brown jumpsuits and, at various points, don caps with what look like tall, curved bunny ears or, depending on how you’re feeling about a given sequence, horns.

In one of the evening’s most dynamic moments, Felesina and Daniel Mayo pair off. They knock knees, and she stabilizes him, sedates him, and runs her hand up and down his headgear in a moment of raunchy humor that elicits a chuckle. Set against a half moon of theatrical floor lights and cap stands, we finally see the interplay between the silly and the sensual that the first two pieces have primed us for. She jumps into his arms, wraps her legs around him, and then climbs his torso as if it were a tree trunk. But he ultimately leaves her on the stage, and she, in turn, turns her attention to a group of men. They touch and preen and bow to her—then run off. Is she a temptress? Is she an outlier? More likely, she is somewhere in between.

And her identity is not completely contingent on men; one of the engagement’s most powerful sequences is one in which she has a sort of pas de deux with herself. To the tune of Winehouse’s “Unholy War,” she performs a poignant, vulnerable, and combative solo. She slaps the side of her chest, then her cheek; she writhes, stretches, then curls her limbs. She tries, it seems, to rid herself—or at least check—some feral spirit. And she shows true strength in spite of or, perhaps, because of her instability. Her imperfection is pointed, progressive, and, ultimately, redeemable.

As the piece reaches its culmination, Winehouse’s soulful “Back To Black” casts a shadow on the stage. Company members surround and lift Felesina, who resists being carried away on this unstable throne. Another woman shines a flashlight on her. She is exposed, but cornered, not liberated. And then Mayo returns for one more pas de deux—this one, combative. He seems to come to Felesina for resolution, but she pushes him to the ground, sits on his back, steals his ears, and walks towards her own, which she has set on one of the cap stands.

Again, a muddled motive. Is she ruthless? Desperate? Or shocked at own daringness? It’s unclear to the audience and likely to her. And yet she forges ahead, walking not towards the sun but towards one of the unnatural yellow floor lights. She does not try to surprise the audience here. Instead, she is in shock; the choreography is organic and unsettling and, in this capacity, deeply satisfying.

She keeps walking. The lights fade. The program closes in a moment of brilliance.

It is anything but perfect.

Previous
After the Rain