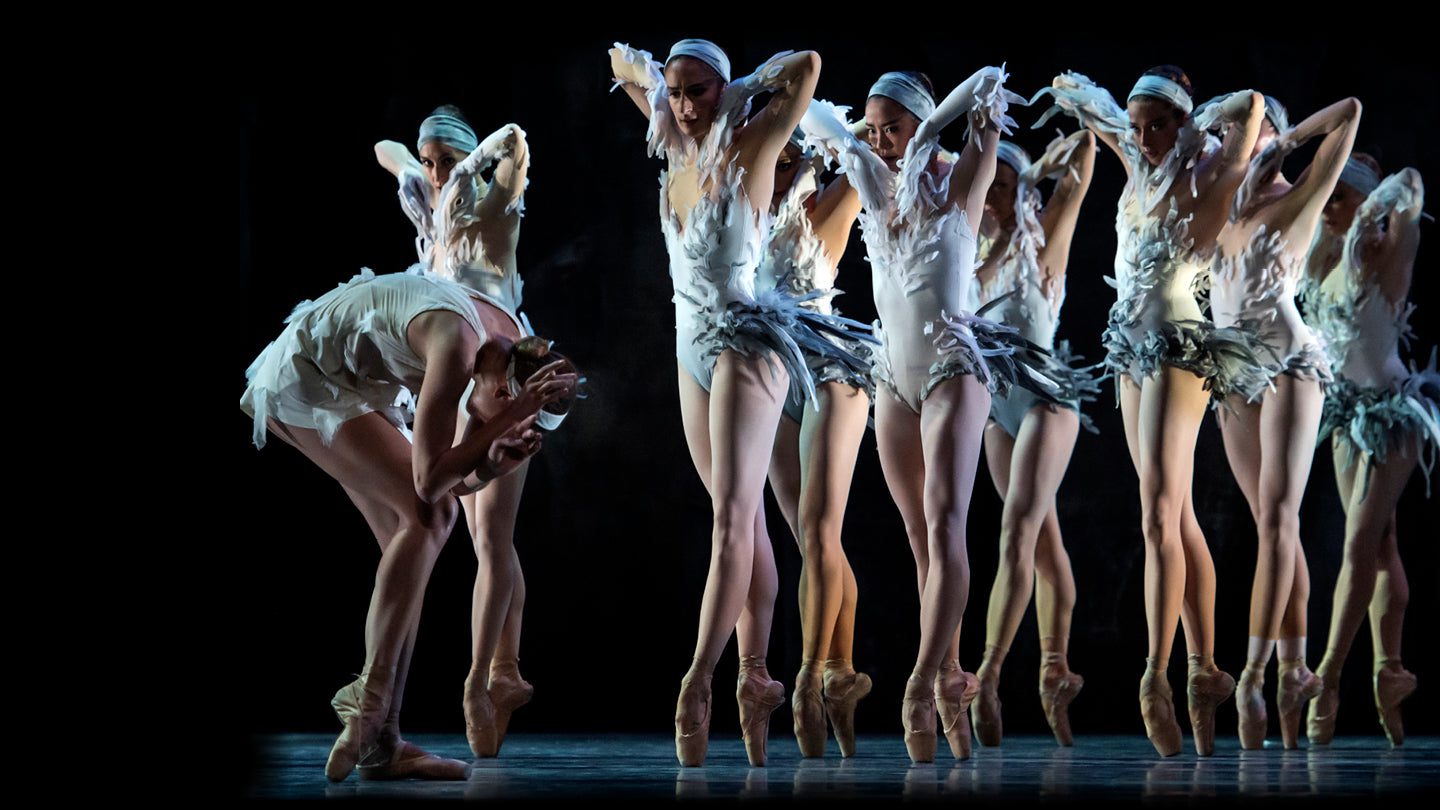 A bevy of black swans circled our car parked near to the lake’s edge. It was my first encounter with a black swan, nose to beak, separated only by a wind-up wind-down window pane. I would have been no taller than one of the swans, had I’ve been out of the car. I remember feeling awestruck by their scale, their very presence. And yet as I was four years of age, or thereabouts, is this a later addition stitched to a memory derived from family folklore? My mum recalled one of the swans hopped up on the car’s bonnet, but wonders now if such a spectacle is likely. A small car buried beneath a mountain of feathered bodies, it is almost a cartoon image—better yet, a cinematic one. In territorial union to our intrusion, the swans rallied, and looped for me a definitive impression of swans, lakes, and Tchaikovsky1.

The swans of my memory were not so unlike the hissing, awe-inspiring Chimeras within Jean-Christophe Maillot’s “LAC,” a modern retelling of “Swan Lake,” performed with attack by the renowned Ballets de Monte-Carlo. Imposing, glorious, memorable.

In “LAC,” Maillot, together with writer Jean Rouaud, resurrected “these buried experiences,” albeit against a more “Machiavellian, family backdrop . . . to present a ballet of contrasts. The change from animal into human being infuse[d] the entire work and question[ed] our own nature. We believe that we differ from animals because of our ability to make choices. But is this all we are capable of? . . . Perhaps our humanity ultimately lies in this unsophisticated insatiability that defines us from our first cry—We want everything!”2

In answer to the ‘we want everything’ cry, for the first time, the Ballets de Monte-Carlo has brought its full troupe to Australia, presented by the Australian Ballet. And, in the spirit of this, I entered the State Theatre on two successive nights for the 6th and 8th performances of “LAC” as though it were 1936 and I was seeing the Ballet Russes de Monte-Carlo, under the direction of Colonel W. de Basil. The Ballet Russes de Monte-Carlo “brought with them some of the most exciting and innovative ballet productions ever seen in this country, fresh from their European premieres. The company was embraced with wild enthusiasm . . . and a love of ballet was kindled that eventually led to the formation of The Australian Ballet.”3

To “LAC” I brought my memories, charged with the excitement of seeing something new. Where the familiar and unfamiliar met, I saw spirits of the air “that, being untamed, represent[ed] the unforeseeable, enjoy[ed] freedom of movement, and inhabit[ed] a sphere that is closed to earthbound [hu]man: the air.”4 And as Italian philosopher Giorgio Agamben described, a rhythmical representation of the human animal as the only “animal that must recognise itself as human to be human.5The human urge to dominate the untameable, ungovernable, other: we want it all.

I saw, in costumes by Philippe Guillotel, a cinematic cyclone. The luxury of gold pleating for the Queen called to mind old Hollywood channelling ancient Egyptian symbols of power, infused with a photograph of Princess Grace at an evening reception in 1981 (pictured in the programme). Her Majesty the Night, performed on both nights by Anna Blackwell, made an entrance worthy of New York’s ballroom scene in the late ’80s. She swept in on the shoulders of two Archangels of Darkness, concealed beneath layers of fabric, the epitome of House of Corey, all but explaining the concept of ‘shade:’ “I don’t have to tell you you’re ugly . . . I don’t have to tell you because you know you’re ugly. That’s shade.”6

Drama is best tempered with lightness, and as such the tenderness between Lou Beyne as the White Swan and Alexis Oliveira in his debut as the Prince (on Wednesday) was achingly real, playful, and sweet as they took turns making a pillow for the other with their cupped hands. Their linked limbs undulated feather-lightly as they made a sequence of shapes in contrast to Her Majesty and her mythical Archangels.

One part Cubo-Futurist artist Aleksandra Ekster’s costumes for Aelita: Queen of Mars (1924) to one part the “art of rhythmic movement . . . one and indivisible,”7 that lies at the point where ballet and cinema meet, “LAC” began with a short silent film of mimetic gesture and sculptural expressiveness, and built upon this rich cinematic vocabulary, frame by frame, and hiss by hiss, until the gasp-inducing, sleight of hand turbulence of the final act. The delicious point of intersection between ballet and cinema, classical and contemporary, is all a matter of one’s own perspective.

Next
Movement in Structure