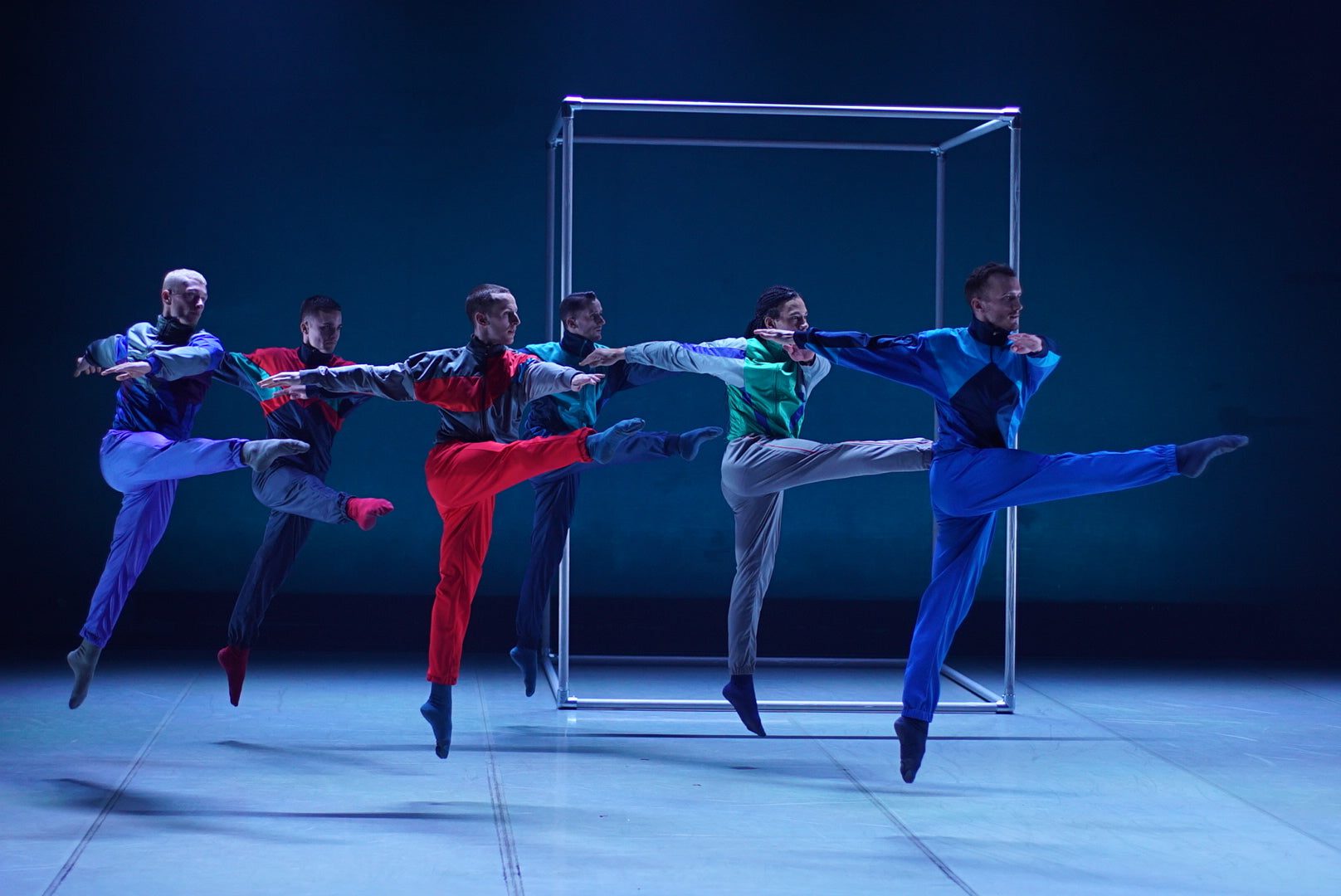 BalletBoyz in “Them,” choreographed by BalletBoyz. Photograph by George Piper
Lorna Irvine·
Reviews
·11

Are We Not Men?

The small group of dancers that comprise BalletBoyz, in decidedly flammable-looking and garish shellsuits (scourge of fashionistas everywhere in late ’80s-early ’90s Britain) flex, clench fists, and strike up archery poses. It’s all about the posturing, here. This provocative, playful piece, “Them,” a collaborative, improvised piece by the company, is all gestural, indicative and suggestive of the shapes teenage boys throw when trying to win over their peers. It’s not about mating, or anything cumbersome like that; rather, it is a bonding process between ‘bros.’

Hip-hop swag, raw athleticism and looseness, it’s all child’s play. Or is it? Nothing is so prescribed here, there is a constant tension between what is presented and what is really meant. The lone prop, a massive cube, is both climbing frame and sports arena for the men to swing from, like monkey bars. It’s hard not to associate some of the more ironic work here with Damon Albarn, lead singer of Blur, when he performed a kind of English thugishness back in the mid-’90s, despite obviously being a nice, middle-class boy. Irony is steeped in some of the devised choreography.

And yet. And yet. There is so much to unpack within: the men tangle in knots, untangle, tangle again, as though identity itself is a problem to be solved. Playful handshakes become near slaps; aggression is always just a grapple away from playfulness, where toy fights are not to be toyed with. The brothers’ fraternal leaps become combative, to the taut pizzicato of composer Charlotte Harding’s gorgeous, often menacing strings. Small jerks of the head emulate the plinks of her soundscape. There’s always one man left out, watching, mindful, wondering when he gets to leap.

The men occasionally reel like soldiers from shots, or lift each other, and climb to the top of the frame—all are struggling to be the lone wolf; yet conversely, the development of the narrative shifts would suggest they are better, when working in tandem.

A solo by Benjamin Knapper, bathed in outrageous purple light, sees him emulate, variously, Pinocchio, Kanye, and a jazz dancer with rubber for limbs. The frame only enhances the vulnerability of his form, when prone. He could be just another little boy, posing in a mirror, in a provincial Anytown, Anywhere.

No such boyishness, nor such an iconoclastic approach, can be found in Christopher Wheeldon’s piece, “Us.” It’s more traditional, and precise. To Keaton Henson’s gloriously aching score, the ’Boyz seem more like elder statesmen. This is austerity ballet, pared-back and solemn, from the wobbling, cautious poses to the slo-mo phrasing. There is an overarching feeling of working collectively, so when the group pile up and just one dancer falls, it’s like a human game of Jenga. Matthew Sandiford particularly impresses with his elegant, almost cinematic samurai warrior poses.

The long, grey button down coats which swing as the men move, restrict them, and when the men are divested of them, and dance in loose white shirts and trousers, so, too, their movements become freer, more fluid. Yogic positions, meditative movement, and being held by hand or foot reinforces collective responsibility. It’s more dreamlike now, and mired in ritualistic Eastern dance. Power dynamics only work when the team pull together, after all. Bradley Waller’s solo shows him turning in on himself, folding legs and almost rolling himself into a ball. He seems to be consciously making himself smaller, when not part of the ensemble.

Harry Price’s sublime pas de deux with Waller is the closer, and it plays with the many disparate tensions in masculine dance pairing. Stripped to the waist, both, Price and Waller square up to each other: at times, they are more like rutting stags than humans; gripping, tumbling, and locked together in mutual mistrust, before embracing and clinging for dear life like lovers.

If masculinity, as with femininity is a construct, the ’Boyz are aware of the poses and tropes which both limit and enhance, particularly on the stage. They deconstruct such notions to perfection, with all of the shades and nuances we have come to expect.

Next
The Dancer Decides