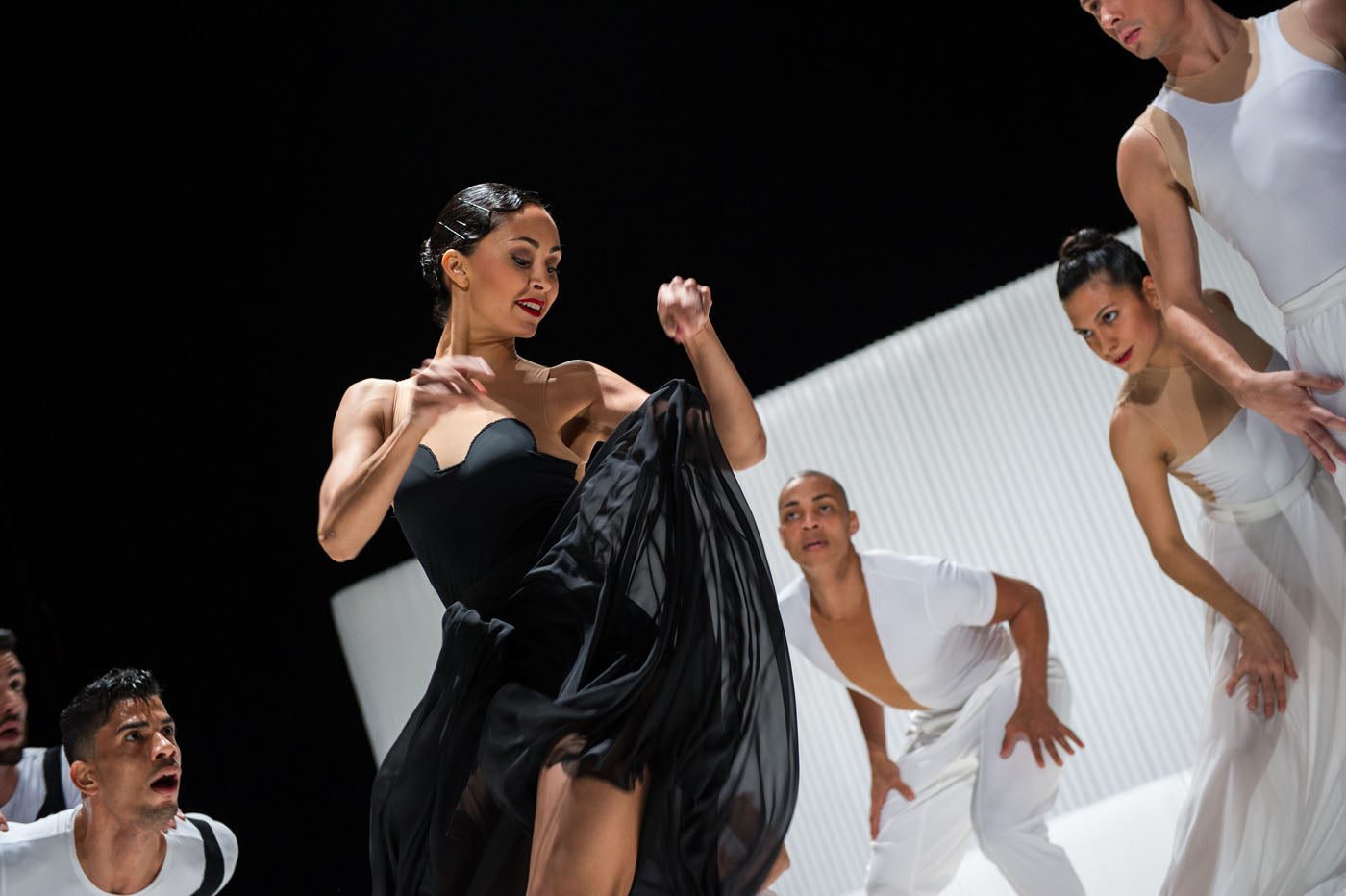 What a beguiling double bill … Esteemed American company Ballet Hispánico bring the heat to a particularly biting and misty Edinburgh. It’s passionate, inventive work to immerse yourself in, evoking long, hot summer nights. We can but dream.

Annabelle Lopez Ochoa’s knotty choreography for “Linea Recta” (2016) plays with the male/female dynamics implicit in flamenco: the tension, precision and simmering sexuality. Soloist Melissa Fernandez has a train extending out from behind her long red lace dress which becomes, variously, a tail, veil, scarf and coverlet, like a spider’s web, for men to become trapped in. Seductress, she stuffs it in her mouth, wraps it around her body and coquettishly, teasingly, playfully slides it between the male dancers who hold her aloft and let her drop into their arms, adoringly attending to her in a cog-like line like a Busby Berkley dream sequence. Limbs may tangle, but feet always stamp and land on the off beat of Eric Vaarzon Morel’s gorgeous guitar composition.

There’s enough to surprise and astonish here—the precision of hand placements and extensions are offset by an allusion to the funky, sassy ballroom of Voguing: Spain is burning. Even a traditional fan dance—once a symbol of Spanish womanhood—is transformed into an ambiguous, tentative one, shared by women and men alike. The ensemble explore the shapes left when bodies are almost within touching distance. It all melts into an acrobatic human kaleidoscope that’s as visually ravishing as it is complex, with gorgeous red lighting by Michael Mazzola, effectively ‘camouflaging’ the ensemble’s bodies so only heads and hands are visible.

Gustavo Ramirez Sansano’s riff on a classic, “Carmen.Maquia” (2012) boasts a stunning set by Luis Crespo with paintings like Picasso. His utilitarian blocks of shimmering white crepe shaped like concertinas aren’t simply aesthetically pleasing, they also can be manouevered around, and lifted by, the dancers shifting meaning with each new scene: acting as cigarette factory, prison and place for lovers’ trysts. Only the black chains on the ground are a little too literal—the ‘chains of love,’ a little cringeworthy … But here, the extensions and lines of the bodies in motion are as modernist as Sansano’s contemporary choreography, a monochrome take on a traditionally red and black design.

This Carmen, a bold and angular Shelby Colona, dances staccato, with wild abandon like a feral child, and discovers her inner kink when imprisoned, as she wilfully helps to wrap a rope around her arms in absolute defiance. Here, a woman’s sexual agency is nothing to be ashamed of. A hand-wringing Don José portrayed by Chris Bloom is both bewitched suitor and cruel captor, conflict and duality playing out in the sensitivity and instinctive movement. It may be Mark Gieringer’s macho, strutting bullfighter Escamillo who draws swoons and attention from the local ladies, who fall like dominoes upon meeting him, but it’s a sure-footed and magnetic solo from Lyvan Verdecia, who may draw comparison with a young Carlos Acosta (with whom he has previously worked) that impresses. His swift, light footwork is breathtaking.

There’s an implicit playfulness too—Gabrielle Sprauve’s shapely derrière sticks out cartoonishly, à la Josephine Baker on the Paris stage; the townspeople make rude gestures as they fight, tumble and swagger, parodying their respective genders. But David Delfin’s costumes, ranging from droogy A Clockwork Orange white figure-skimming suits, to boleros and pantsuits, are deliberately androgynous choices—indeed, the ensemble dance semi-nude at one point, backs to the audience, vulnerable and hard to pick apart. They swap roles as easily as they sport unisex apparel. And even if the storytelling is rather lost at the service of the dance halfway through (the tarot cards foreshadowing Death are hard to read) it’s pulled back for the devastating tragic finale, where Carmen is dead, and Don José the killer will have to atone, hands punching the air in impotent gestures, pacing back and forth, alone with only his conscience for company.