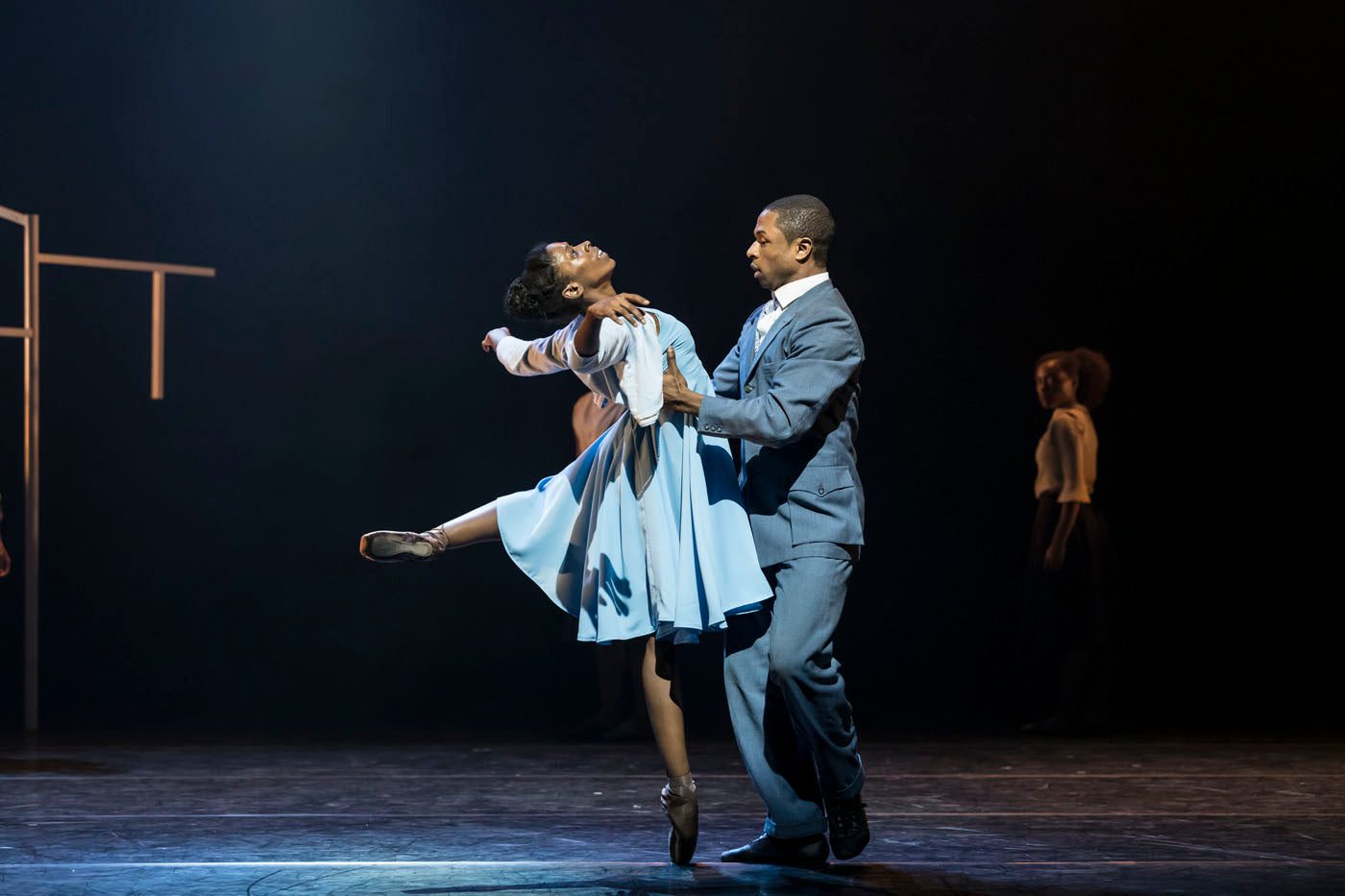 Willowy Cira Robinson’s Matilda seduces a debonair Simon (Mthuthuzeli November) while her attractive yet prim husband Philemon (José Alves) is working, only for him to return early and catch them in flagrante.

Burning with fury and jealousy, Philemon sets out to punish Matilda, and, after fleeing the scene, the suit left behind by her now errant lover serves as a constant symbolic reminder of her infidelity. The central recurring motif is washing, of scrubbing bodies clean: yet, she is forever stained, her feet constantly restless, ready to run. As the ensemble become, variously; the townspeople watching and judging, a collective guilty conscience, and a symbol of attempted reconciliation and romantic tenderness, culminating in a highly charged samba sequence, Philemon remains unmoved and unyielding, a threatening patriarchal presence, dragging Matilda by her wrists and ankles.

Indeed, the routine seems a timely one, in the wake of #MeToo, with Matilda often seemingly little more than a pet to Philemon. This notion is consistently reinforced by Robinson’s feline shaping upon waking and precise extensions in hold, and by way of contrast, Alves’ strutting, stuffed shirt brutality, hunched like a coiled spring.

There are some gorgeous scenes, particularly within the pulsing jazzier interludes, and the ensemble are superb, but the storytelling is sadly a little too on the nose. Subtle, it ain’t.

“A Dream Within A Midsummer Night’s Dream”

An impish wind blows through Arthur Pita’s 2014 piece. It is at once mischievous and melancholic. Four dancers perform stately arabesques to Handel’s glorious Sarabande until … hold up! An iconoclastic figure, in the unlikely form of Isabela Coracy’s Scout leader Puck, appears to disrupt and confound, flitting between gender with her green beard and mohican, and stamping her little feet. To Eartha Kitt’s slinky “Let’s Do It” she shimmies, sprinkling fairy dust which is snorted like a class A drug by Sayaka Ichikawa’s spritely Helena, who despite being peacock displayed by two male suitors, squeals and runs off, finding love instead with, first rival, then soul mate Hermia (an equally graceful Marie Astrid Mence).

This is a surrealist, cartoonish rendering, and all the better for it. Under Puck’s spells, men caterpillar across the floor, hip hop moves replace balletic tradition, and the absurdism of Elizabethan courtship is pastiched. Mthuthuzeli November’s Demetrius/Bottom is a tentative predator. Puck’s sleeping spell even works when the dancers are en pointe.

Yet there is an unavoidable air of incongruous creepiness at points. Jean-Marc Puissant’s twinkling twilight design shimmers with unspoken dangers lurking in forest shadows. A butterfly net whisking ladies off is an unsettling reminder of Nabokov’s perverse lepidopterist. November doubles up as a bizarre Salvador Dali mask-donning stranger with only half a moustache. Veils conceal identities, and the sense of impermanence permeates.

In the main though, it is a delight. The two lords a-leaping, Oberon (José Alves) and Lysander (Ebony Thomas) get together in a display of trust to Jeff Buckley’s gorgeous, quietly devastating “Lilac Wine.” Their pas de deux with heads bowed and limbs entwined is a moving example of symbiosis. But as Demetrius transforms into a sleepy, fragile Bottom, Pita’s visionary version of the Bard’s dream serves to remind us that humanity—and love—can make asses of us all.