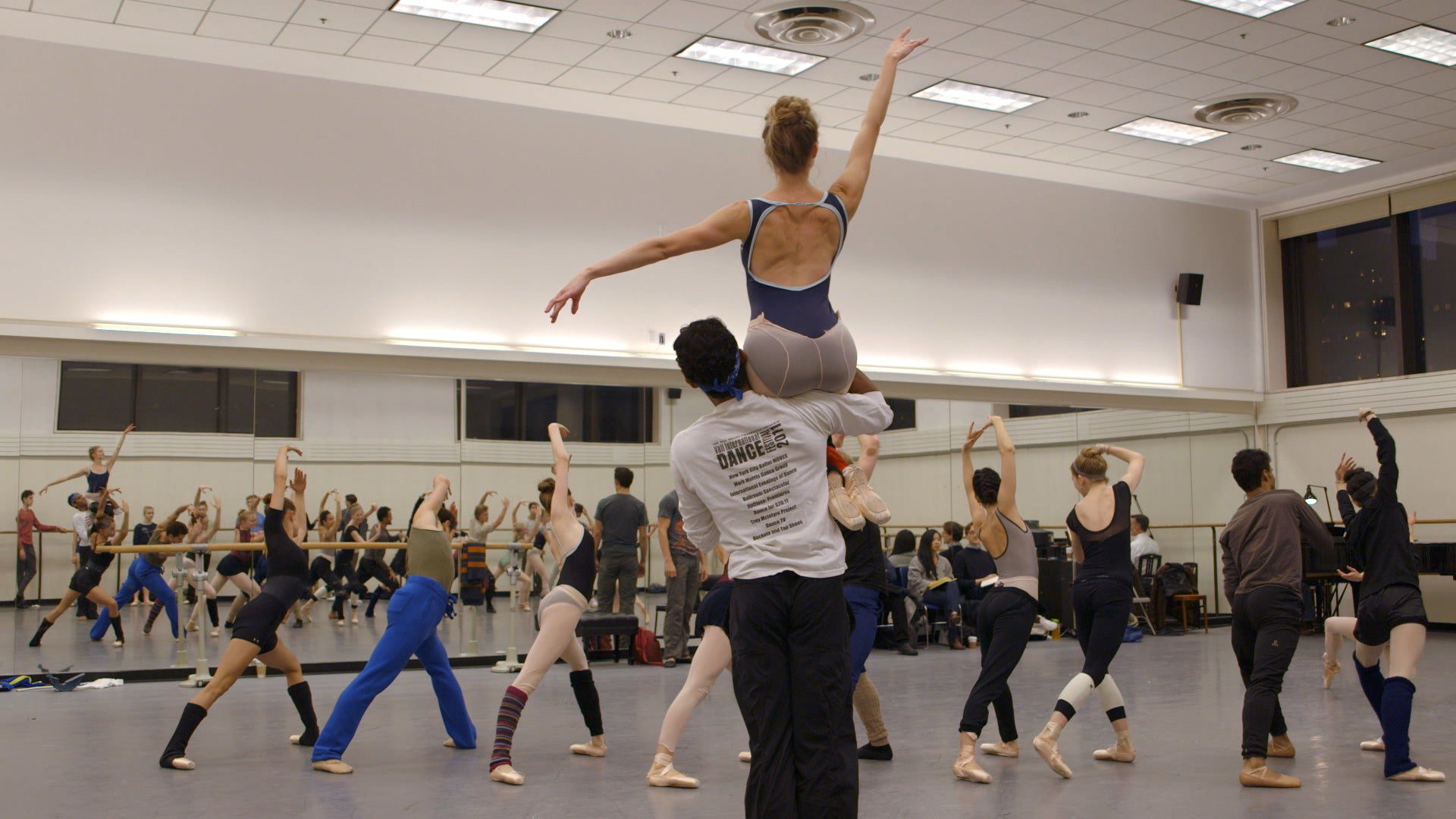 There’s something about the formalisms of the ballet world that gives one an almost racy feeling when its backstage doors open up. One of the great strengths of Ballet 422, directed by Jody Lee Lipes and produced by Ellen Bar (the latter a former soloist with NYCB; the two are married): all that takes place backstage remains unadorned. There are no back-stories, no interviews, and we’re left not knowing the names of some of the dancers. Then again, ballet is about “showing and not telling,” Bar told me over the phone. A dance doesn’t come with footnotes or appendixes attached; when these are added, as is the case in most documentaries, they betray the very premise of the form. Bar and Lipes made the right decision when they chose not to try to “explain away” the inner workings of the art, leaving it just naked as it is onstage.

This also means that the character central to Ballet 422 remains something of a mystery, as does his choreographic process. The film follows Justin Peck as he makes “Paz de la Jolla,” for the NYCB 2013 winter season, and takes its name from the ballet’s order in the repertoire; it was preceded by Peck’s “Year of the Rabbit” and followed by Christopher Wheeldon’s “A Place for Us.” We’re not even told what the ballet is about. (From what I saw onstage, a man and a woman take a nap together on the beach; in her dream, the woman is seduced by and almost succumbs to the waves before being woken by the heat of the sun). Most creative processes would have suffered under such an objective look; the prospect of watching someone write a novel from start to finish interests me about as much as a field trip to the dentist. But choreography uses living bodies as its medium, and so necessarily takes place in the public, social sphere.

Still, there’s very little plot to Ballet 422. The pressure mounts as the premiere draws closer—one month, one week, one day—and I suffered a sympathetic anxiety when, with only a few rehearsals left, dancers are still turning the wrong way and some sequences continue to fall flat (“pancake moments” as the regisseur Albert Evans calls them). The documentary allows for a true “unified field” between subject matter and viewer. Its texture is an aesthetic one; the way Lipes captures the cutting of fabric or the dancers waiting between rehearsals makes these everyday moments something of ballets in their own right. Everyone is muttering the musical counts under their breath all the time, a mantra which turns prayer-like in rote repetition, and while Peck uses Bohuslav Martinů’s Sinfonietta La Jolla, a score composed in standard 4/4 time, there’s some surprisingly tricky math that takes place. The question “What would you like?” repeats itself into an almost humorous infinite regress in the exchanges between the costume designers (Reid Bartelme and Harriet Jung) and the dancers.

All of this makes the comparison between Ballet 422 and Darren Aronofsky’s Black Swan, which was drawn by a number of ill-informed film critics, ridiculous. Ballet 422 trumps even Frederick Wiseman’s La Danse, which is, after all, about the pedigree of an institution (why else must Brigitte Lefèvre talk in circles about how her troupe is the best in the world). And then the original choreography featured in that movie reminds me of the Henry Adams’s reaction when he went to see the company perform in 1892, “the dismal ballets making his heart [sink] to mere pulp.”

If anyone was hoping to see the backstage drama of ballet clichés, they’d be disappointed. The greatest conflict takes place when Peck asks music director Andrews Sill if he can talk briefly with the orchestra, and Sill is a little slow to give his response in the affirmative. This might have something to do with the age-old rift between the people who make the dance and the people who make the music, which is not unlike the dynamic shared between the waitstaff and the kitchen in a restaurant. But the overall feeling is that of a highly functional family. This is unsurprising in light of the fact that Peck went to the School of American Ballet, where ninety-eight percent of NYCB dancers are sourced, and spent his teenage years in the dorms along with everyone else.

The difference might be the way Peck uses this experience to inform his work. One of his primary concerns seems to be the coming together of a group of people and the dynamic that unfolds between them. When there are principal dancers, they arrive camouflaged in the midst of the corps, and the latter seems to be where Peck’s heart really is. “It [Peck’s choreography] is all about a sense of community, a community which has strengthened and risen in his work—different relationships contracting different emotions, the hills and valleys of human contact and communication,” soloist Taylor Stanley told me over the phone. Instead of having dancers doing the same thing in a row as is the case with most corps formations, they build cumulative structures together in a way which forces recognition of their interdependence. This takes place in playful and surprising ways; in “Paz” the ocean is represented by a group of people, each person a wave.

The pas de deux is forced out of the limelight, quite literally. There are a few boy meets girl moments but they’re short and sweet, evoking the same kind of innocence with which Wes Anderson (Peck’s artistic spirit animal) approaches his love stories. Though Peck has been well lauded, it’s interesting to note that he’s received some critical backlash, much of which condemns him for an insubstantial use of the couple and a subsequent lack of emotional depth—as if the only emotions ballet can articulate have to do with romance. When watching Peck’s work, I keep thinking of a quote from Italian philosopher Mario Rossi in which the “great interests of man” are listed as “air and light, the joy of having a body, the voluptuousness of looking.” Besides the fact that this probably sounds less grandiose in Italian (oh ye extravagances of Romantic languages), these three tenets offer a solid curriculum for looking at his choreography. In “Paz,” it looks almost as if the dancers open up to the “warmth,” on their shoulders; Peck cited the synchronicity of mating birds and recurring weather patterns as inspiration for his latest work, “Rōdē,ō.”

In order to convey such subtleties of interior experience, he asks his dancers to imagine wiping sweat off their brow or feeling the sun hit their face. “He’s so image-based,” said Stanley. “He’s able to articulate what he wants with visceral things in the earth, in people, in human emotion.” This kind of lyrical inspiration is then communicated via the performance, and might explain why the audience receives his numbers with standing ovations.

The film conveys this all so quietly, the takeaway being that the creation of the best works of art probably have to do more with painstaking workaday details than anything else. At the premiere we see Peck sitting next to an elderly lady who doesn’t seem to know who he is. We’re anxious to see something of the finished product, but instead we’re given Peck in the studio again, working through the steps which have since been translated to the stage.

Lipes’s incentive was certainly not to “put ballet in tin cans,” as critic Arnold Haskell called the dance film industry of the 1950s. He says that he’s not even particularly interested in ballet; he happened to see Peck give a demonstration and was struck by the young choreographer’s (then twenty-four years old) focus and lack of self-consciousness. Instead of the curtain closing at the end of the film, the camera moves outside, and the famous Lincoln Center fountain grows smaller and smaller on the screen. “The world hasn’t stopped, and NYCB is just going about it’s business,” Bar said. “It’s almost like childbirth in that it’s a miracle, but it happens all the time.” The anticlimax at the end sends another message: if you’d like to see how the ballet shapes up, you’ll have to go to the theater to see it for yourself.

Next
Ham and Eggs