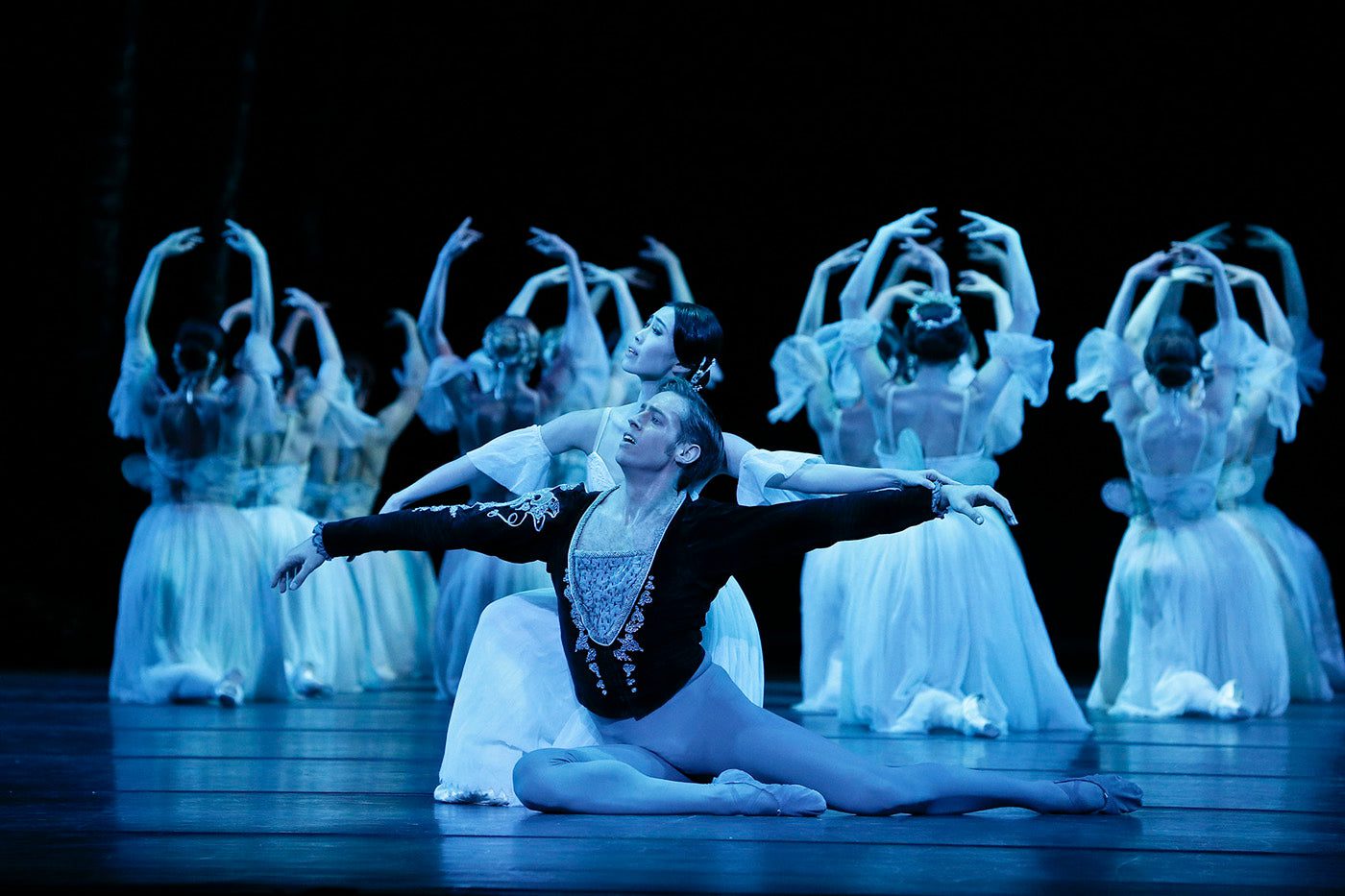 Light and dark, day and night, youth and maturity, a flirtation and redemption, naturalistic and ethereal: “Giselle” spins a conjuror’s trick all the wilier for its very familiarity, its everlasting allurement.

An autumnal village presented in Act I flips to reveal the ballet blanc of Act II: two halves of a whole. We know this, we anticipate this, we lap it up. Fermented in honey before interval, raising a flagon of mead to love, and even love’s folly, and unpinned madness, we heed the warnings spun to the villagers. The flipside to a light-hearted Peasant pas de deux is heartache and mourning. We are cognisant of the fact that when we return to our seats in the theatre, the scene will have changed. Light for dark. Day for night. Of the earth for beyond this realm. A village for the darkest forest floor of folkloric apparitions who demand you dance to your death. Raise your flagon of mead for raise your ghostly spirits, cloaked in a shawl spun by otherworldly spiders.

True to a magic trick, in the Australian Ballet’s 259th performance of Maina Gielgud’s production of“Giselle:” how is it that I had not really noticed Hilarion, a forester (gamekeeper) before? Giselle and Count Albrecht make a ballet classic, but Giselle and Hilarion could have made for a happier life. Against the backdrop of opposites, there appears a triangle. In magic, ballet, life, it appears. Unrequited love and anguish wears a beard in the form of Jarryd Madden, and his performance portends great things to come in Lucas Jervies’ “Spartacus,” to conclude the 2018 Melbourne season. On Tuesday night, Madden’s Hilarion is more than a narrative ploy to reveal Albrecht’s deception through identity as the finder-of-cloak-and-sword; he is more than a game-offering, unnoticed suitor in the woods; more than a warning that Myrtha and her glow of Willis mean business: you will dance to your death.

But of course, the night truly belongs to Giselle, performed by Leanne Stojmenov and Count Albrecht, performed by Chengwu Guo. It was Stojmenov’s second time in the role1, the gleam of which was not lost on me. Both Giselle, the character and the ballet, appear tangible because of, rather than in spite of, the magical, behind-the-scenes elements of opposites, triangles, superstition, and that score by Adolphe Adam in play. Combined with the directness of a grave mound marked with a cross, and clarity within the choreography, both flit, soar, twinkle, eternity long. Such a framework, making what was new and beguiling in 18412, relatable and captivating in 2018.

In Stojmenov’s hands, or should that be spring, yes, you can die from a broken heart. You can transition from roll-the-dice first crush, shy shrugs and doe-eyed flirtations to crushing heartache, the embodiment of betrayal, madness, death, do-not-pass-go, in one act and make it utterly plausible. And in Guo’s wooing, leaping, tireless brilliance, yes, I see what she sees in him, that dashing Count: he flies! What gamekeeper? Together, in Act II, Stojmenov and Guo, weave forgiveness and understanding and maturity into the spell of what it is to love someone, and I believe them, heart and soul. Stojmenov’s every gesture conveys forgiveness and acceptance, as she kept Guo dancing until dawn, and in doing so gives him life anew. And in doing so, I understood why it is their story.

Magic is believable when it is true at the core. And strong. And strong and beautiful are the Wilis as they glide over the forest floor. In particular, Lisa Craig from the corps de ballet and soloist Karen Nanasca as the leading Wilis who repeatedly block Guo’s chance to escape. In order for the Wilis to appear light, they must in fact use their weight. “There is a look of lightness, of floating, of not touching the ground…. as if they are moved by the wind in the forest…. Often dancers think they create an illusion of lightness by trying to feel light. In fact it’s by using their weight in the right way”3.

Even when trying not to get swept up by the harvest to haunting splendour of it all, ‘Giselle’ is classical dream from the Peasant pas de deux, performed with high-spiritedness by Jade Wood and Brett Chynoweth, to Guo’s near spent, no way spent entrechats. Naturally, set and costume designs by Peter Farmer, and original lighting design by William Akers, makes just looking near impossible. And so I let myself be carried away once more, and those long white romantic tutus appear to glow red as the dancers move: or have I crossed to the other side?

Whether it is Giselle’s unravelling recollection of her pas de deux with Albrecht (in Act I) or Albrecht sensing Giselle’s presence but finding he is alone in the forest (in Act II), they are always twined together. G 4 A, strike an arrow through it, and carve it into a tree.

Previous
The Emu in the Sky

Next
A Decade of DANCEworks