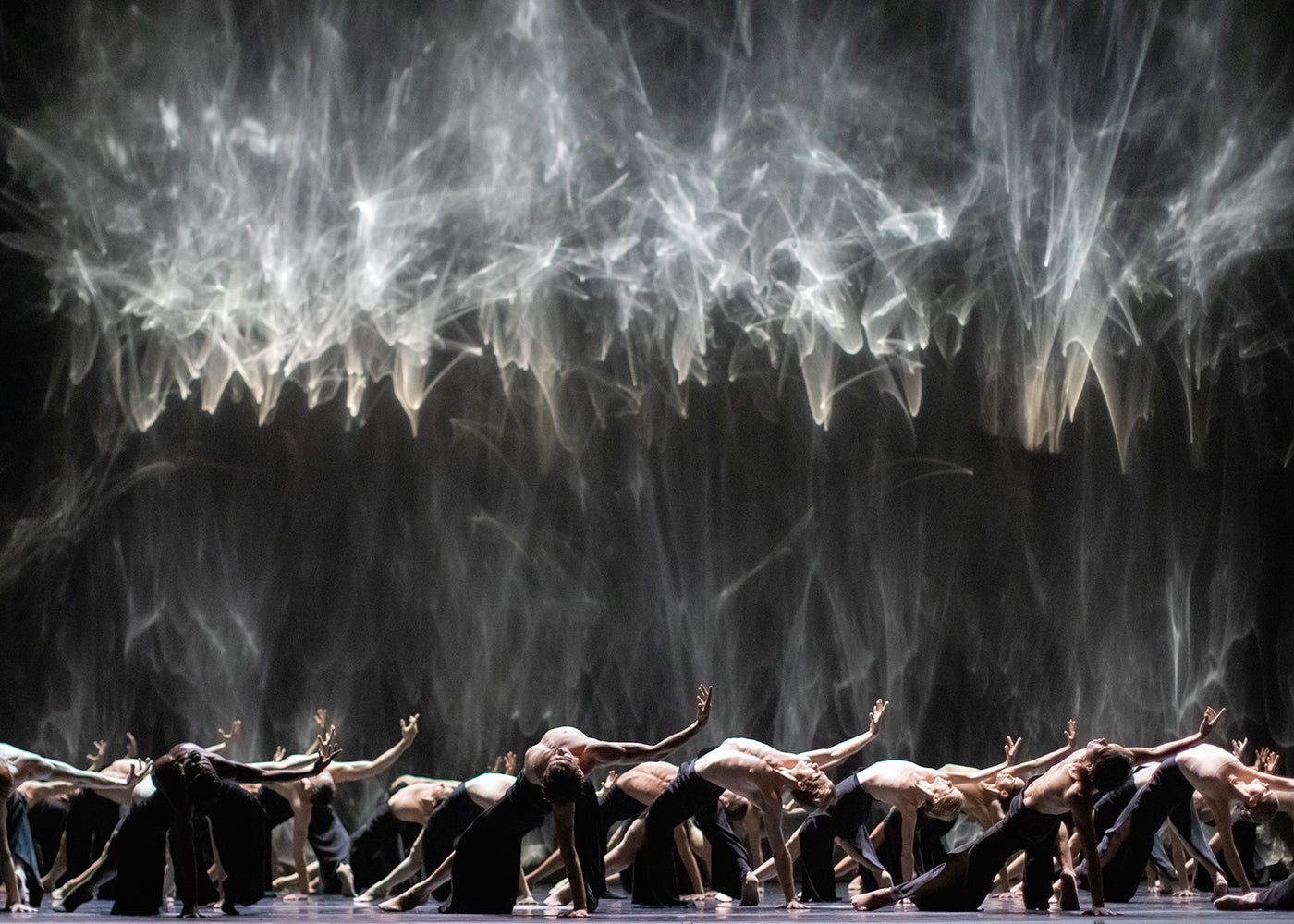 Seeing in the Dark

I had high expectations going into the National Ballet of Canada’s mixed program on opening night. What was on the table for being the greatest highlight of the evening was Greta Hodgkinson dancing her final role before retirement in the historically star-studded “Marguerite and Armand” (originally created for Fonteyn and Nureyev by Sir Frederick Ashton). The gesture was well-considered to celebrate the ballerina’s 30-year career, but the program did not gel as I had hoped. Alongside the contemporary “Chroma” set to music from the White Stripes and a world premiere by Crystal Pite, the three pieces seemed worlds apart. In a most extraordinary end to the night, one had to shed preconceptions and put dance aside to fully appreciate where the program was taking us.

Opening the evening was Wayne McGregor’s “Chroma,” set within a brightly lit white cube. Principal dancer Heather Ogden and second soloist Siphesihle November delivered the most riveting performance against John Pawson’s stark set, as they found moments of fluidity and phrasing between hard-edged lines. This execution made all the difference in an abstract piece, transforming McGregor’s choreography from a series of angles and static extensions into a connected movement that penetrated space.

Ashton’s “Marguerite and Armand” followed with Hodgkinson in the title role, but the piece quickly seemed dated after the splashy opener. The story of a love-sick Marguerite (based on the real nineteenth-century, French courtesan Marie Duplessis) came across as superficial without the benefit of character development in a full-length ballet. Even after a lovely series of attitudes and soaring lifts between Hodgkinson and her partner Guillaume Côté, it was hard not to feel valuable stage time lost as Hodgkinson play-acted and was tossed around by her incensed lover.

It was here that expectations did not serve me well; this was certainly not the Greta I wanted to remember at the end of her career. Although Hodgkinson has performed many classical and romantic ballet title roles to great acclaim, some of the most memorable pieces to see her in over the decades were “Rubies”from Balanchine’s “Jewels” as well as “Summer” from James Kudelka’s “Four Seasons.” These were strong solo roles where it was truly all about Greta and I wouldn’t have it any other way. As I stood for the deservedly long ovation at the end of “Marguerite and Armand,” it was not for the completely flawless performance that it was, but to honour the journey and accomplishments of such a magnificent artist. I will always remember Greta as triumphant, dancing not in the Cecil Beaton designed dresses of Marguerite but in ruby red.

At the close of the triple bill evening, the company finished on a transcendent note with Crystal Pite’s world premiere “Angels’ Atlas,” in which light itself became the centrepiece in Pite’s exploration of the ephemeral.

My predicament: shortly after the curtain rises on “Angels’ Atlas,” I have to remind myself to watch the dancers. The reason for this is an achingly beautiful light form that stands out against the dark stage and hovers above the thirty odd dancers. This wondrous scenography, a sculpture of reflected light, is the concept of Pite’s close collaborators and designers Jay Gower Taylor and Tom Visser.

This wondrous scenography, a sculpture of reflected light, is the concept of Pite’s close collaborators and designers Jay Gower Taylor and Tom Visser.

Below the geometry of light, dancers become strictly mass. Through Pite’s ensemble choreography, their shadowed bodies are reduced to moving surfaces—for light to catch onto before escaping back into shadow. It is Pite’s way of expressing how the invisible world sometimes shows itself to us. If Taylor and Visser have found a novel way to “deliver light to a surface,” it is Pite who then gives shape and texture to that surface.

Where Pite has long been interested in the tension between the individual and the collective, in “Angels’ Atlas” the trope is less present. Even the most captivating solo moments performed by Hannah Galway, Siphesihle November, Heather Ogden, and Donald Thom are only brief glimmers outside the dark conglomerate of bodies. In “Angels’ Atlas,” dance is suddenly an accessory to light as Pite goes after a new kind of tension between what is illuminated and what remains hidden.

In this, the piece is a spiritual terrain that strongly recalls the paintings of Jack Goldstein who copied light patterns against dark skies from photographs of explosives taken during WWII. In a 1992 lecture, he explains: “What happens with the lightning paintings and these black-and-whites is that foreground becomes background and background becomes foreground. That sense of presence/absence, everything moves back and forth …”

The negotiation of foreground and background is something that repeatedly emerges throughout “Angels’ Atlas.” Movement phrases alternate between the front two rows and the back two rows, continually shifting the audience’s focal point through the depth of the stage. In a particularly arresting visual sequence, dancer Hannah Galway is diminished to silhouette, traversing the length of the backdrop with light bursting and trailing behind her; the light makes her appear closer to us than she really is, whereas further downstage one strains to see a figure rolling in near complete darkness. Experiencing this illusion, I have to ask, which figure is closer? How are we meant to perceive something we can barely see?

In an unexpected turn as a creation for a classical ballet company, “Angels’ Atlas” is much less about dance than it is about light. Pite’s 2015 piece “In The Event” for NDT1 seemed to explore similar concepts, but was more earthbound. “Angels’ Atlas” ventures higher, into the celestial realm, to make us question the limits of knowledge and our own fleeting existence. By the end of the piece, what is material seems to waver—the final image cloaked in shadow is only as lasting as a scent and I can’t help but, in Pite’s words, lean into the unknowable.

Next
Black Eyes and High Tide