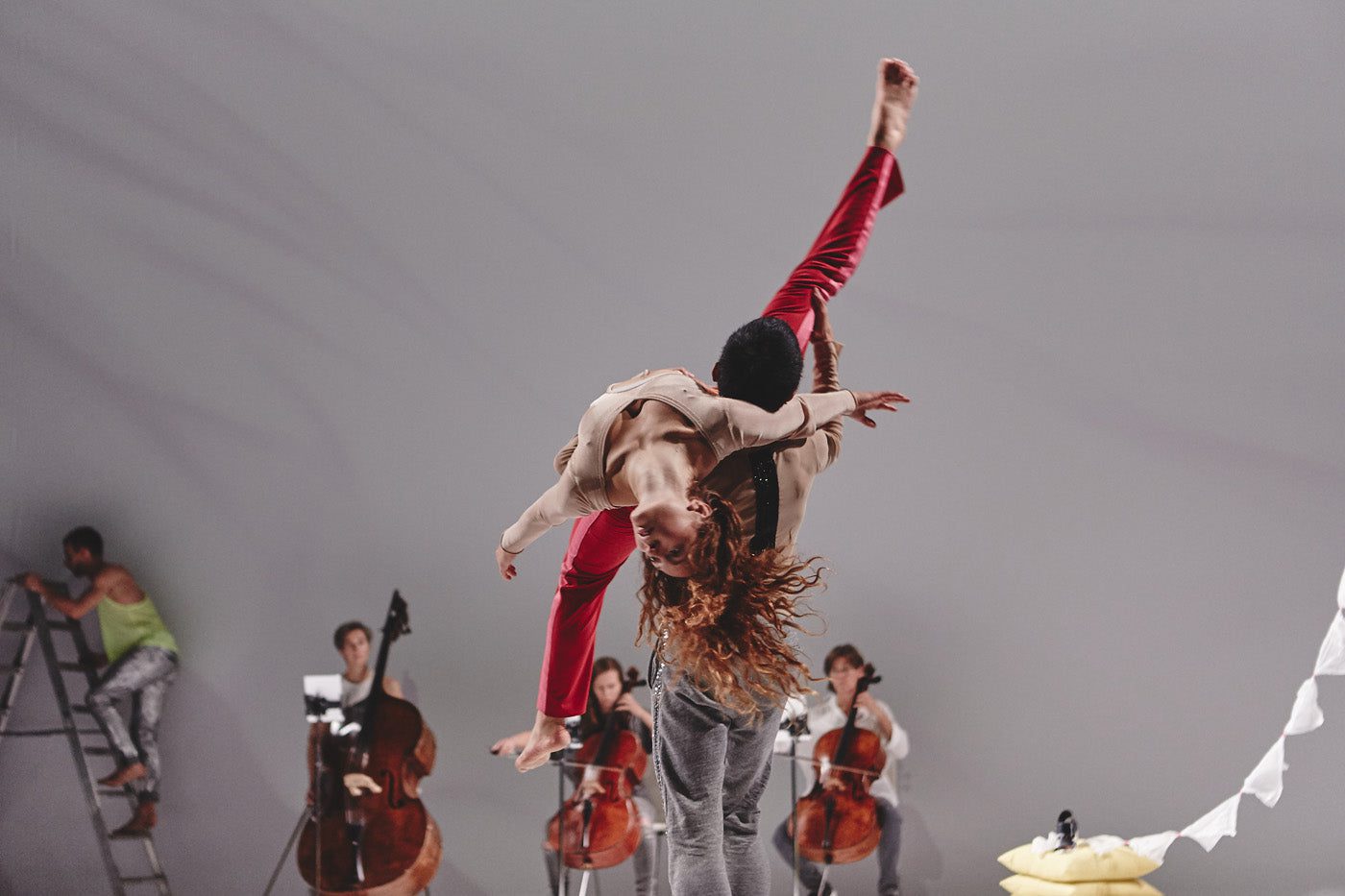 How to reinvent J.S. Bach’s famous, sublime Goldberg Variations? This collaboration between Stockholm-based choreographer Örjan Andersson and Scottish Ensemble’s Jonathan Morton seeks to do just that, with a series of choreographic movements integrated with the musicians themselves, blurring roles and responding to the fragmentary nature of the music. It is an ambitious project, and one which mostly works through sheer audacity and imagination.

The first of thirty variations announced by dancer Csongor Szabó bursts into life, juddering in funky R’n’B rump shaking. It appears to ‘infect’ the rest of the dancers as they all shimmy together, and initially feels somewhat jarring: such sexualized movements juxtaposed with the delicacy of violins and cello playing. Scottish Ensemble play beautifully throughout, building upon and then stripping back each piece, revealing the individual components—whether gentle, elegiac or euphoric—that make up the whole work. Even Scottish Ensemble’s viola player Jane Atkins can’t resist getting in on the dancing at one point, in a playful, playgound-inspired routine where she tumbles, claps her hands and falls to the ground. Other musicians join in later, in a surreal slow-motion movement where the lighting by SUTODA feels distinctly funereal. Such sharp contrasts are what make Bach’s music so bewitching.

At its very best, the piece is a head-spinning, disorientating navigation through tentative relationships, and the uneasy push and pull of hormonal interactions, where it is uncertain whether it will end in sex, violence, or both. It is troubling in the extreme, playing with the inherent ambiguity of human nature.This is particularly true of a scene where Danielle De Vries and Eve Ganneau, clad in sinister black face masks, square up to each other like bulls and have to grope blindly towards each other, in order to wrestle. The human jigsaw puzzle is also eerily effective, with first Paul Pui Wo Lee and then József Forró held aloft as the others link limbs and the soloists slide over their heads. It feels like a five people mosh pit.

“Variation 25”—also known as the “Black Pearl”—sizzles with tension, with an incredible, sinewy solo by De Vries. She is Ophelia-esque in her frenzied motion. It feels like an exorcism of something, as she claws the air and is seemingly pulled back and forth by an invisible force along the floor.

But there are flaws here at times; undeniable moments of languor in Andersson’s choreography, a little padded out through overuse of props, or with both ensemble and musicians running in circles. The playful humour can border on wacky at times, with dancers putting trousers or tissues on their heads, wearing bowls on their feet, or hiding in the black curtains for no apparent reason. It does rather invite a comparison with Pina Bausch, who at least created a strong narrative—her humour didn’t exist in a vacuum and came about as an extension of strong characterisation and storytelling.

Sometimes phrasing too can seems a little over-familiar, as with the ensemble work in “Variation 7’s” ‘character dance’ which clearly owes a lot to Michael Clark Company’s David Bowie/Iggy Pop period—the provocative high kicks and cheeky glam posturing emulating his “Come, Been and Gone” from 2009—right down to the silver and gold spangled leggings.

When it works though, there is a palpable tension in the room. Solo work is particularly breathtaking—Wo Lee’s puckish flights of fancy in a green skirt towards the end feel particularly inspired. And the repeated motifs in the footwork, such as military-style heel-clicking and crashing to the floor, work well to mirror the percussive shifts of Bach’s music. It is the sleek sensuality of Andersson’s choreography which is most effective, and the controlled anarchy seems almost surplus to requirement. Still, an undeniably engaging performance with many moments of genuine alchemy.