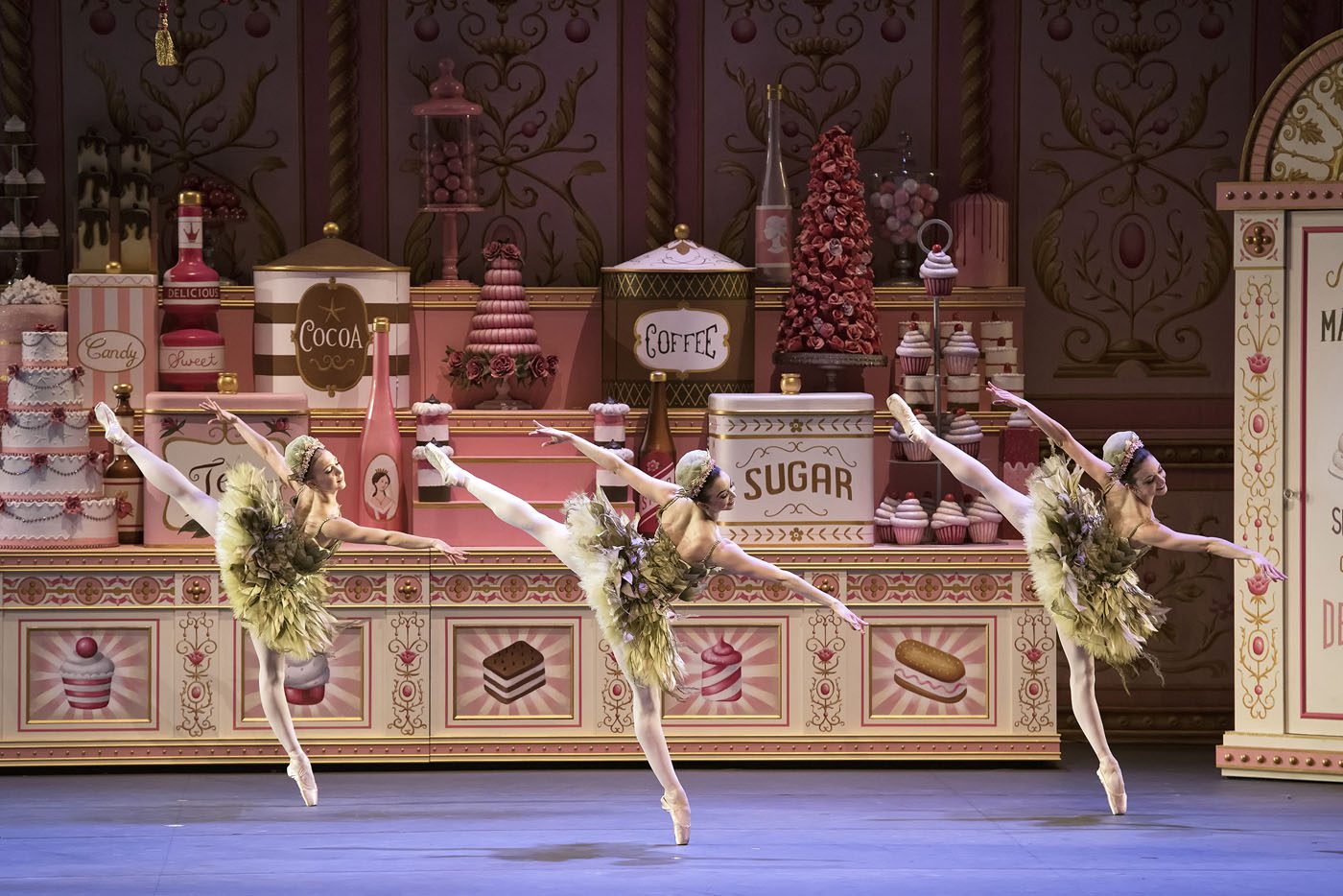 A kind of cross between Willy Wonka & the Chocolate Factory and the booze-infested flick, Lost Weekend, the world premiere confection, “Whipped Cream,” landed with a sumptuous, if occasional cloying, sweetness in Orange County for a five-day run, before making its frothy way to American Ballet Theatre’s home—the stage of the Metropolitan Opera House—in May.

Created by ABT’s artist in residence since 2009, the wildly prodigious Alexei Ratmansky, this 100-minute bonbon benefited greatly by, not only Richard Strauss’s raucously brassy score, “Schlagobers,” but also by the décor and costumes courtesy of pop-surrealist art star, Mark Ryden. The original sell-by date was June 24, 1924, when the ballet, then choreographed by Heinrich Kröller and bowing at the Vienna State Opera, fell flatter than an undercooked soufflé.

But $3 million—what the work, which should come with a warning to diabetics, reportedly cost—will buy an awful lot of cupcakes, cookies and cocoa. Seriously, the story (Strauss also wrote the libretto, a nod, perhaps, to Massine’s “La Boutique fantasque”) of a young boy who gorges on pastry in a Viennese bakery, falls into a sugar coma and is treated by an alcoholic physician before being rescued by a phalanx of festive royals, including two princes and a pair of princesses, could, in truth, have a seasonal shelf life rivaling that of “The Nutcracker.”

And why not? The ballet also features kiddies cutting loose and Ryden’s strange, wondrous and indelible imagery: false, oversized heads, marzipan, sugar plum and gingerbread men, and fantastical backdrops adorned with such oddities as an Abraham Lincoln visage and a bouncy bumblebee. Add to this Kay Thompson’s “Think pink,” proclamation from Funny Face, and this two-act fantasia, decidedly drenched in the color of the female species, is powered by more than tiaras and tutus.

Indeed, with a mighty Ormsby Wilkins conducting the Pacific Symphony, opening night also featured an all-star cast: The whirling dervishness of Daniil Simkin’s The Boy is innocence—and energy—personified (if only innocence could leap, partner and pirouette like the young Russian); the eagerly awaited return of David Hallberg (Prince Coffee), whose injury had sidelined him for several years, once again embodied the nobility of line, effortless jumps and articulated footwork that make him a prince for our times. He was also a worthy partner to Stella Abrera’s Princess Tea Flower (no chamomile brew, but something akin to Kombucha or high-octane lapsang souchong), who reigned supreme, as well, her winsome demeanor a joy to behold, while Sarah Lane (Princess Praline), was a study in saucy assuredness, and a perfect coupling with Simkin.

Okay, so after our Boy falls prey to his gastronomic cravings and nearly ODs on sugar (every dentist’s nightmare, or dream, depending on one’s point of view), the bakery comes alive with terpsichorean delights, and, as the audience is swept up in the visual splendors, saying ‘ah’ isn’t confined to the doctor’s office. In addition to the principals, the slew of goodies, including Joseph Gorak’s Prince Cocoa, Princess Tea Flower’s attendants, Prince Coffee’s guards and Princess Praline’s Swirl Girls, cavorted through the pâtisserie as if possessed.

This proved a tad dizzying, however, as the performers, all brilliantly and colorfully costumed, were often at odds with—and indistinguishable from—the busy salmon-tinted backdrop.

Still, the score, occasionally smacking of Strauss’ 1894 “Till Eulenspiegel’s Merry Pranks” (the composer’s daring opera, “Salome,” presented by Los Angeles Opera, is also on view through this weekend), reached a frenzied climax with the Act I finale. It was then that 12 women, dressed as slinky peaks of meringue, including pointy-headed snoods, entered the scene, literally, sliding. These members of the corps, stars in their own right, once again validated the idea that ABT is one of the best troupes in the world.

But when the rosy curtain came up on Act II, it was a different scene and mood altogether, with Alexei Agoudine’s Doctor (he also danced the jumbo-headed chef),  tending to the sick-in-bed Boy. Accompanied by a dozen Nurses wielding huge hypodermic needles, this gang was more than ready to administer their palliatives, after which Doc, seemingly suffering from a migraine, began swigging liquor, the bottles coming, miraculously—and comically—to life (DTs, anybody?).

It’s a bleak picture, to be sure, with a large, blinking eye looming overhead and x-rays of the Boy’s stomach prominently displayed. But help is on the way, as the medical pros take their leave and Princess Praline’s forces arrive, helping the Boy escape to a kingdom of phantasmagorical creatures. Included are a slithery, long-tailed varmint and several enormous, albeit blank-eyed, stuffed animals. Then there is Nicolo, a Master of Ceremonies, (Joshua Binowitz), presiding over this balletic kitschfest that is the apotheosis of Ryden style, an eerie blend of camp and quasi-carnage, if you will.

At its core, however, “Whipped Cream” is a dance, a woozy, light-as-meringue affair, but a dance, nonetheless, with Ratmansky giving his performers steps aplenty. From rich, complex phrases to a sinuous torso vocabulary, he makes good use of a musical composition that has rhythmic dynamics in addition to orchestral fullness, the violins, tuba and percussion a satisfying blend, whether summoning a waltz or something more sinister.

Amid these cherry-topped sundaes, chocolates galore and the animated Candy Land scenery, Simkin and Lane dance a duet and several solos—Simkin has buttery soft landings—with Doc continuing to drink up a storm and the pinks looking more like shades of Pepto-Bismol. While it was Marie Antoinette who purportedly declared, “Let them eat cake,” this Ratmansky/Ryden collaboration effectively lets us, well, have our cake and, if not exactly eat it, surely revel in it with unabashed glee.

Multiple casts complete the run (including the marvelous Herman Cornejo, Gillian Murphy and Hee Seo), and, if the opening night house was any indication, “Whipped Cream” will be whipping audiences into a frenzy—diets be damned—for many more performances to come.

Previous
A Blessing and a Curse