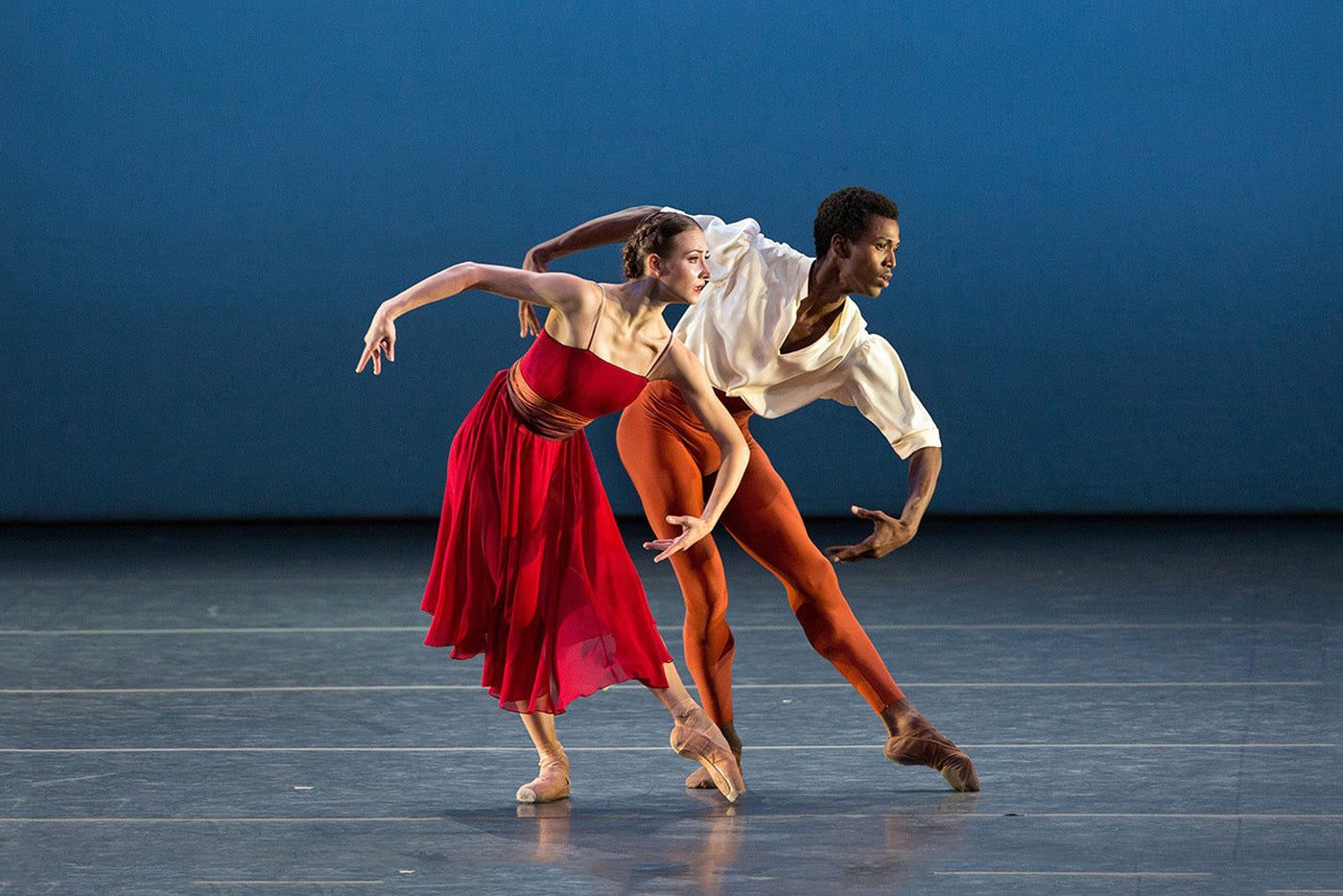 The world premiere of Alexei Ratmansky’s “Songs of Bukovina”

A world premiere of Alexei Ratmansky’s “Songs of Bukovina” was one of the highlights of American Ballet Theatre’s fall season at the Lincoln Center. The ballet is choreographed to the commissioned score by Leonid Desyatnikov, namely a selection of preludes from his newly-minted, incandescent Bukovinian Songs (24 Preludes for Piano). (The music in its entirety will be premiered in Russia next spring.) This is the sixth ballet of Ratmansky-Desyatnikov creative team and the third with the entirely new music. Previously, the choreographer made two ballets: “Lost Illusions” (2011) for Bolshoi Ballet and “Opera” (2013) for La Scala Ballet, for which Desyatnikov was commissioned the score.

There is much to admire in “Songs of Bukovina.” It reveals before our eyes the world that is quiet, luminous, and downright happy (as opposed to the poignant “Odessa,” which shakes you to the core, leaving you gasping for air.) In fact, to watch this “Songs” is to partake in a festive village gathering and to experience what it feels like to be on a sunny afternoon in the area of the title, Bukovina, a picturesque region located on the northern side of Carpathians. When you watch “Songs,” you envision the bright rays of the sun illuminating the ground and almost feel a breeze of fresh mountain air. (These effects are in no small part due to the gorgeous lighting, created by Brad Fields, which floods the stage with an appealing golden glow and create a summery atmosphere.)

Throughout the piece, the folk-inspired choreography has a jubilant, cheerful feel to it—the proceedings evoke an engagement celebration of sorts—though a few moments of sadness and grief creep in here and there. There are four supporting couples (but they rarely assume the secondary role), plus the principal couple, whom I perceived as a bride and groom.

The women of the ensemble are dressed in what looks like the stylized folkloric attire, their pale silky dresses adorned with aprons and colorful ribbons, their hair braided and styled in a crown-like fashion. The leading ballerina, however, stands out from the crowd, wearing an alluring bright red dress. The costumes for the men are effective, but less attractive—plain white shirts and dark tights in assorted solid colors.

The ballet has a fragmented nature and resembles a collection of short stories or episodes. For the accompaniment, Ratmansky selected a dozen evanescent preludes from the original set of twenty-four; each one is different from the others in rhythm, texture, and tone, ranging from jazzy and spritely to meditative and slow.

In its use of folk motifs, “Songs of Bukovina” vividly echoes Ratmansky’s momentous “Russian Seasons,” another ballet set to Desyatnikov’s music. (Yet I found “Songs” to be more placid and restrained and somewhat less dramatically and visually intoxicating than “Seasons.”) Also, in some ways, particularly in its prevailing atmosphere of community and friendship and its piano-only accompaniment and five-couple structure, this ballet is akin to Jerome Robbins’s masterpiece “Dances at a Gathering.”

Ratmansky’s mastery of movement vocabulary finds its reflection in every moment and leitmotif of “Songs.” The choreography for the ensemble is intricate and fluid, its structural geometry infinitely varied and visually appealing; and there are many wonderful moments for the principals, too. There is an achingly beautiful solo for the leading ballerina, danced with exquisite poignancy and fragility by the excellent Isabella Boylston. Tranquil and sorrowful, her monologue looked as though the bride was bidding farewell to the carefree gayety of her girlhood. In another episode, she walks on the floor with her feet firmly flat as if underscoring solidity and steadiness of her new role as a future wife and a mother. In another episode, her partner, Gabe Stone Shayer, is dancing his heart out in a different kind of farewell: surrounded by his best men, he evokes a soldier going away to war.

There are so many ways to read and interpret Ratmansky’s ballets—his choreographic language is so rich in color, emotion, purpose, and meaning. “Songs” is no exception; and I look forward to seeing and rediscovering this piece again.

When, after the performance, the dancers came onto stage to take a bow, they were joined by Alexei Goribol, the Russian pianist, who played Desyatnikov’s preludes during the ballet and to whom the music was dedicated. Goribol, looking visibly moved, pointed to the theater and acknowledged the composer, who was sitting in the audience. A living composer attending the performance of his work—events like this, alas, don’t happen in ballet that often.

Goribol, looking visibly moved, pointed to the theater and acknowledged the composer, who was sitting in the audience. A living composer attending the performance of his work—events like this, alas, don’t happen in ballet that often.

“Songs of Bukovina” was the centerpiece of this superb and beautifully danced program. The evening opened with another Ratmansky gem, “Serenade After Plato’s Symposium,” which the company premiered in May 2016, at the Metropolitan Opera House in New York.

It’s a tall order to translate in movement a philosophical masterwork whose subject is love. Yet with his brilliantly crafted and intellectually insightful “Symposium,” Ratmansky accomplished just that. The ballet is set to the equally brilliant music—Leonard Bernstein’s 1954 violin concerto that lends the ballet its title.

As a starting point, the ballet takes a renowned text by Plato dated c. 385-370 BC, which depicts a gathering of noble Athenians, who give speeches on the subject of love, with each participant offering his own perspective on the topic. “They explore how love can help the soul to understand truth in the pursuit of wisdom and beauty.”

Ratmansky’s “Symposium” unfolds like a measured conversation. Seven men (as in Plato’s text) take center stage in the beginning of the ballet. They lose themselves in a fascinating string of solos, duets and group numbers and their relaxed and seemingly effortless dancing looks and feels like a friendly discussion. A lone woman joins this group of sophisticates later in the piece. Dressed in a long bright turquoise tunic, she must be the priestess Diotima of Mantinea, who features in Plato’s treatise. She dances a mysterious and lyrically subtle pas de deux with one of the men and then leaves the stage as quietly and enigmatically as she appeared. We see her one more time, at the ballet’s finale, with all the men reaching toward her in the ballet’s spectacular closing image.

The program closed with Christopher Wheeldon’s enchantingly restless “Thirteen Diversions.” It’s a handsomely designed ballet, featuring chic costumes by Bob Crowley and imaginative lighting designs by Brad Fields. Benjamin Britten’s Diversions for Piano (left hand) and Orchestra, Op. 21 provides this work with its inspiration and potent kinetic momentum. At every turn, this ballet looks exhilarating, driven, and assertive. Here, Wheeldon is a master of choreographic permutation—his ingenious shifting patterns for the ensemble surely delight the eye. But while this piece is rich in energy and architectural invention, it feels short on emotion. Still, the exhilarating performance of the cast made up for any dramatic shortcomings. Gillian Murphy, Blaine Hoven, Hee Seo and Cory Stearns made a particularly memorable impression.

Next
A Love Supreme