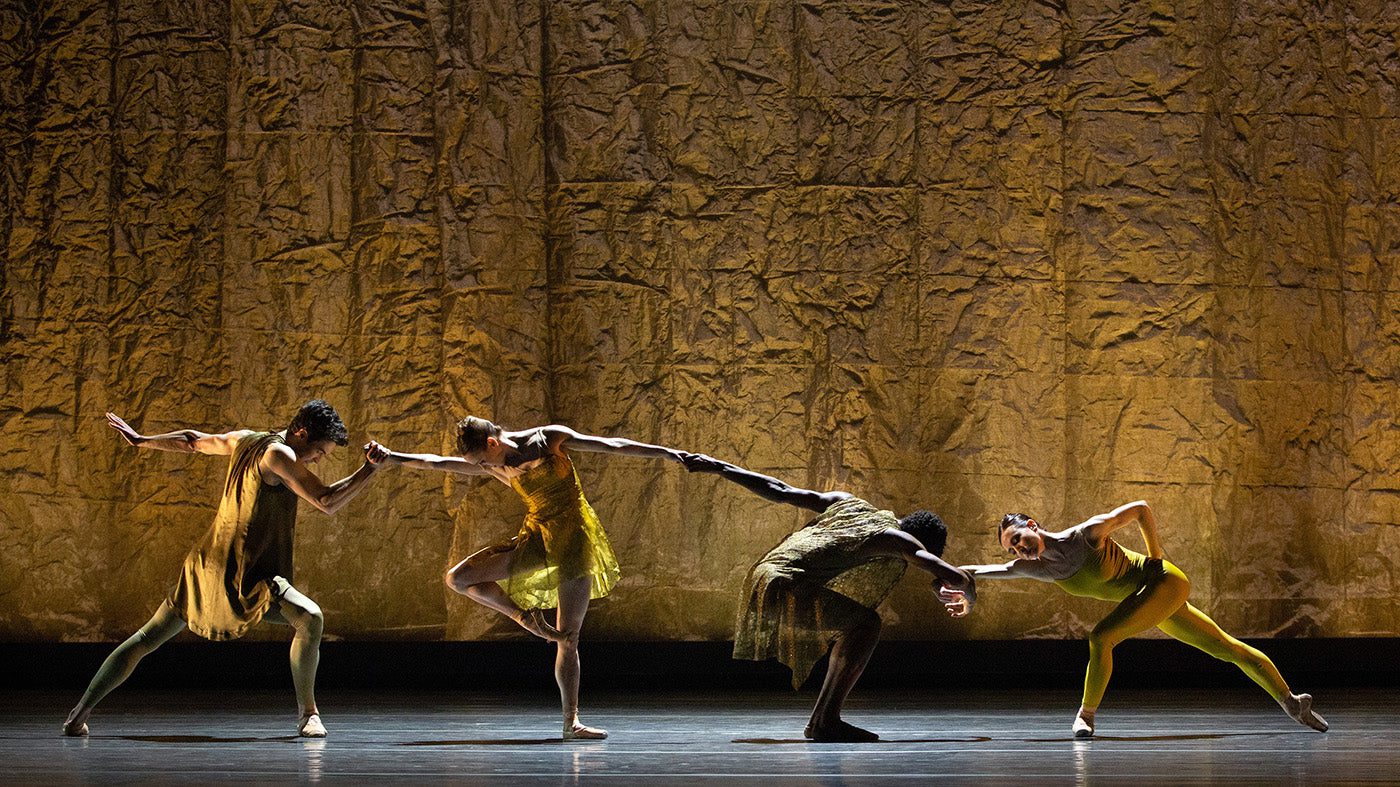 King’s newest ballet, which made its New York premiere this season after first being performed at California’s Segerstrom Center for the Arts in March 2022, was much anticipated. And it was transcendent. “Single Eye” made the audience think. Why were only a few dancers wearing sculpted plumes that extended out from their hips? Why did the ensemble fall into deep pliés and then synchronously scuttle slowly across the stage? Why does Shevchenko  slowly yet resolutely push Forster into the wings at the end of their pas de deux? The closest thing to an explanation that the audience is given is the Bible verse written in the program: “If thine eye be single, thy whole body shall be full of light.”

The ballet was full of texture, aided by music by jazz composer Jason Moran and set and costumes by Robert Rosenwasser, a co-founder of King’s company, LINES Ballet. There were movements that were extremely grounded, almost primitive, and also ones that were gravity-defying. Later in the ballet, principal dancers Devon Teuscher and Calvin Royal III performed another mesmerizing pas de deux that rolled so slowly to a stop that the falling curtain almost came as a surprise. It was all dazzling to the point that it is near impossible to recall many more specific moments, only emotions. The ballet was beautiful enough that it would have felt complete with just that movement.

But “Single Eye” also couldn’t seem to settle on how much it wanted to communicate a plot line. At one moment in the ballet, when the music was percussive, a dancer was spotlighted in the corner of the stage balancing on one leg, then the other, as birds called in the background. Then, she was gone as quickly as she had entered. It was mesmerizing and significant, but also confusing. It was a fragment of a plot that had been previously relegated to the background. As one audience member described it during intermission, it felt like the dancers were angry about something—but the object of that dissatisfaction was never made apparent.

The ballet was one of three in a mixed repertory program titled “American Splendor,” which started with George Balanchine’s neoclassical “Theme and Variations” before taking a modern turn in “Single Eye” and Jessica Lang’s “ZigZag.” After a season filled with more classical story ballets like “Don Quixote,” “Of Love and Rage” and “Swan Lake,” the program allowed the company an opportunity to show its full artistic range.

“Theme and Variations,” created for American Ballet Theatre 75 years ago, again proved its timelessness, although its grandeur still paled in comparison to the story ballets the company had just finished performing. Principal dancer Skylar Brandt, always a strong dancer with high stamina, easily made her way through the 23-minute ballet at full energy. In her second solo, where the dancer travels across the stage in a sequence of pas de chat, soutenu to a double pirouette from fifth position, Brandt seemed to get faster in each pirouette. As the male lead, principal dancer Herman Cornejo danced cleanly, but couldn’t quite match Brandt’s buoyant energy.

Performed right after “Single Eye,” “ZigZag” felt like the extroverted cousin that is just there to hang out with everyone. The ballet, which ABT premiered in October 2021, had the audience roaring with applause, and several drew oohs and aahs as well. The ballet’s structure, segmented into numbers set to various Tony Bennett songs, moved the piece along quickly as each song conveyed a different pace and atmosphere.

Most of the ballet prompted smiles, especially when Teuscher, soloists Luciana Paris and Blaine Hoven, and corps de ballet member Jarod Curley danced to “Smile.” Curley, stepping in at the last minute because principal Aran Bell was injured, was also self-assured and elegant in his solo to “I Left My Heart in San Francisco.”

A choreographed curtain call that had the 14 dancers moving until the very last moment possible brought the audience to their feet. Afterwards, that joy continued to spill out of the theater, tinting the New York City summer sky a brighter blue as the magic of “Single Eye” still hovered in the back of the mind. But for those still craving the drama of a story ballet, the company will be closing out its season with “Romeo and Juliet” next week.

Next
Three Afternoons at “Swan Lake”