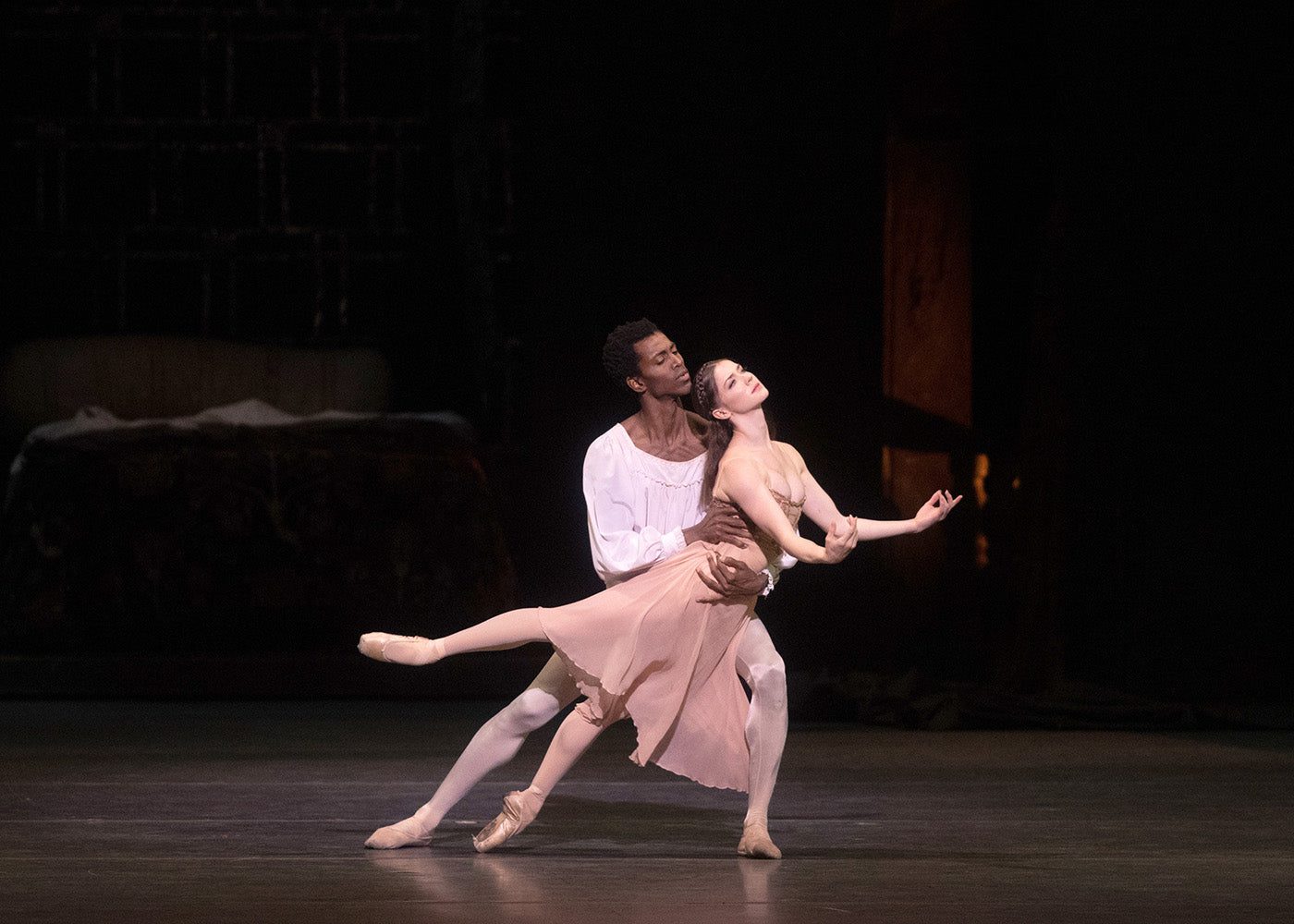 In a season dominated by old standbys, Kenneth MacMillan’s “Romeo and Juliet” stands out as one of American Ballet Theatre’s most evergreen. The production fits the company like an old glove, perhaps not as sleek as it once was, but still handsome and well made. The pas de deux—around which the ballet is built—have ingrained themselves in the audience’s collective consciousness. Everyone knows what comes next. Their steps melt into waves, that is, until the moments in which Romeo holds Juliet aloft, or the two dancers face each other in total stillness, barely touching. As if on cue, the audience holds its breath as one.

The street scenes teem with business, sometimes tiresome, but the swordfights, honed to a kind of ritualistic perfection, do not fail to thrill, particularly the ones for Mercutio and Tybalt and Tybalt and Romeo in Act II. Mercutio’s teasing, bravura fighting ends with a treacherous stabbing from behind, followed by an operatic death scene, the male equivalent of Giselle’s immolation. This has always been an opportunity for up-and-coming male dancers to grab the spotlight, and at the July 16 matinee, it was young Jonathan Klein who, with macabre laughter and stumbling steps, had his moment. (He appeared to be living it to the fullest.) As Tybalt, Duncan Lyle, who opted for contempt over thuggishness, was also very effective.

The show was Cassandra Trenary’s début in the role of Juliet. The recently-promoted principal dancer was partnered by Calvin Royal III, who had débuted just a few days earlier as Romeo. The two were paired last fall in “Giselle.” A similar dynamic emerged. Royal projected  innocence and beauty, even sweetness, expressed through a natural nobility of posture, light-handed partnering, softness of touch, and a radiant smile. How could this young girl not find herself in his thrall? Trenary, meanwhile, was impulsive, still childlike in some ways, but on the cusp of sensual and emotional awakening, trusting, open to experience, unfiltered. As she arrived at the Capulet ball, you could practically feel her blush through her costume.

Dancers always seem to lose themselves in the storytelling in this ballet; it is the work with which they identify the most. The same is true for the audience—who has not known the self-destructive impulses of young love? Prokofiev’s swelling, hyper-melodic, and cinematic score plays its part. Its emotional pitch rises in waves and holds you there, expanding and pulling at your emotions until a lump inevitably forms in your throat. Resistance is futile. MacMillan’s choreography has a similar quality, even when it descends into excess, as in the death pas de deux in the Capulet vault, in which the dancer playing Romeo hoists Juliet’s limp body again and again, in a ghoulish echo of the balcony rendezvous.

Trenary and Royal, who were to have débuted together in 2020, allowed themselves to be carried along by these waves, each following his or her natural tendency. Neither is a showy technician. Royal leads with beauty; what one remembers are his elegant renversés, body stretched into a graceful curve; the pristine, delicate work of his lower leg in complex phrases; his beautiful, fluid port de bras. He is dancing more swiftly, more cleanly, and with more through-the-music phrasing than ever. A deeper plié would make it all look more lush, more resonant.

Trenary is the opposite, both grounded and light. One senses that she really feels the floor, pushes off of it, as she rises on pointe, runs, bourrées, or launches herself into a jump. Her movements are full; everything is connected. So too the dancing and the interpretation of character and situations. Trenary is led by her charaterization, so that each movement feels motivated by thought and emotion. Standing on her balcony, high up, one could sense her breathing, filling her lungs with excitement, rather than lolling sensually in the moonlight as many Juliets do. And when she descended to Romeo’s side, it seemed as if her heart might burst. In the pas de deux, her body was yielding, soft, driven by trust. Even more so in Act III, after awaking by Romeo’s side.

This was a solid performance all around, though I missed Roman Zhurbin’s grave, bullying Lord Capulet. Carlos Lopez, as both the Prince of Verona and Friar Laurence, switched convincingly from angry, disapproving authority to docile religiosity. Luciana Paris was the most appealing, carefree of harlots (there are three, and they have more fun than anyone). Zhong-Jing Fang suffered grandiloquently as Lady Capulet. The orchestra, led by Ormsby Wilkins, brought the drama.

This was the last of the company’s spring offerings. It caps off Kevin McKenzie’s final Met season with the company, at a moment in which the roster is bursting with talent, particularly among the women. The addition of Daniel Camargo to the list of principal men adds further luster. But the repertoire, with few exceptions, is feeling rusty and a bit rote. The incoming leadership, under Susan Jaffe, has a lot to do: add more performance weeks, refill coffers depleted by Covid, give these dancers more, and more interesting opportunities to grow and reveal new sides of themselves; and, relatedly, decide what to do once the tenure of its resident choreographer, Alexei Ratmansky, ends, in 2023. There is much to do.

Previous
Sharing stories, past and present

Next
A Pretty Picaresque