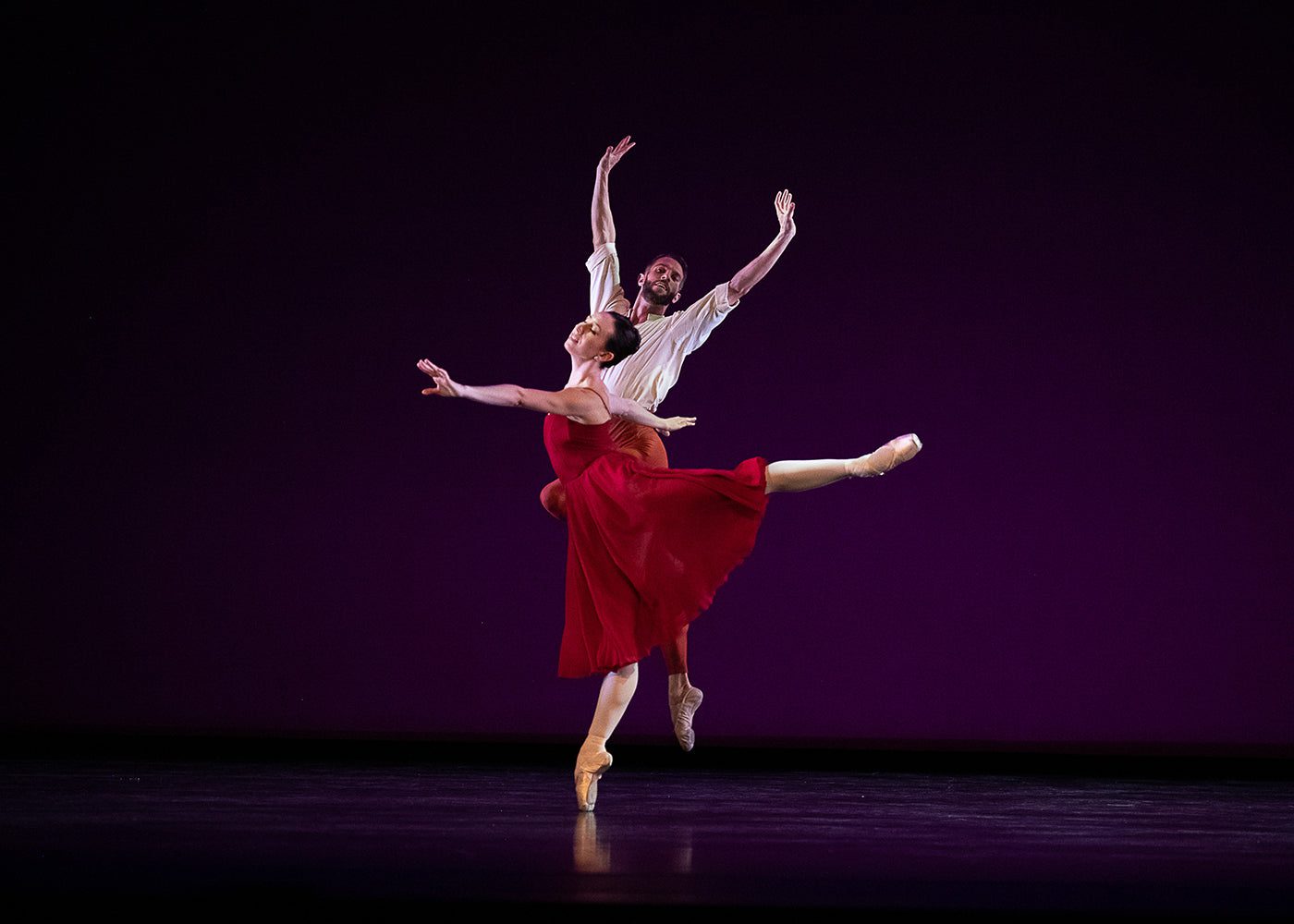 The American Ballet Theatre aired a pre-filmed, all-Ratmansky program this week on City Center’s digital platform. For $25, it is accessible on demand through April 18th. I highly recommend it. There were three works offered in excerpt and one world premiere, “Bernstein in a Bubble,” created recently in a working quarantine at the Silver Bay YMCA in upstate NY. During a pleasant intermission interview between Linda Murray (Curator of the Jerome Robbins Dance Division at the NY Public Library) and Alexei Ratmansky, he explained that the new ballet used music which had been composed by Leonard Bernstein to fête the artists of the Boston Philharmonic, noting that it was full of inside jokes for the musicians. Ratmansky delightfully piggybacked on this theme, crafting a work that celebrated the dancers of ABT while poking fun at their rep. He said, “the idea behind this new piece was very simple: just to give them something to enjoy.”

The cast of seven did indeed appear to be having a good time, and their communal joy made the empty theater feel less hollow than it usually does in these filmings. Ratmansky always creates complete worlds onstage, and this one was goofier than most—though it had its dark moments. I loved it; the dancing was incredible and the ballet humor had me chuckling throughout.

The ballet opened with the full cast onstage, to blaring, circus-y music. The dancers were casually dressed, with their hair apparently styled as they liked. Cassandra Trenary and Blaine Hoven both sported frizzy bleached-blond locks, and she wore neon practice clothes. When they paired up for a bombastic pas de deux it looked like a ballet rendition of Saved by the Bell—they had such a ‘90s California vibe. Silly accents abounded, even a tender mazurka for Aran Bell and Patrick Frenette included chicken struts, bunny hops, and childlike somersaults. But they also somberly crouched into balls, evoking the cocoons we retreated into during Covid.

A turkey trot for Skylar Brandt, Patrick Frenette, and Tyler Maloney mocked the “Sleeping Beauty” excerpt which opened the program. Brandt was hoisted aloft and passed back and forth in the same static Italian changement position in which she had been stuck for an awkwardly long time in the Rose Adagio. Earlier she grinned and beared it, here she was visibly annoyed. She also hopped on pointe in arabesque as the men limbo-ed or crawled under her leg, a spoof of the famous Dark Angel promenade from Balanchine’s Serenade. Then the men hovered as she completed a sensational balance on pointe, catching her at the last second for a “Corsaire”-inflected final pose. Usually, in pas de trois featuring two men and one woman, the men do a lot of partnering and manipulation—aiding and enhancing the lady’s every move. The clever conceit here was that Brandt is such a strong technician that she didn’t need any help; instead, her consorts were often in her way, or else serving as window dressing. It was fabulous.

Next, Hoven separately dragged Bell and Catherine Hurlin onto the stage and placed them in opposite corners. They were like “Nutcracker” (or maybe “Coppélia”) dolls. He did a Puckish flourish and left them in standing repose. With a change in music they sprung to life for a sensual, bluesy pas. It was a good gag. Elsewhere there were human chariots like in Balanchine’s “Apollo,” and cowboy swaggers and gallops as in de Mille’s “Rodeo.” The finale featured the entire cast doing deranged, happy skips to what sounded like scary clown music. A trio of men crab walked with a little added hiccup to match Bernstein’s symphonic irregularities, and the women nodded aggressively while pounding out échappés on pointe. To finish, they gathered for a group selfie. The entire piece was wonderful; its levity matched the current vaccine-fueled hope in the air, as well as the spring thaw. But it also acknowledged that we have all gone a little mad over the past year. And that last pose brilliantly nodded to how most dancers have been performing in the interim, self-directed on Instagram and Tik Tok.

The three pieces which preceded “Bernstein in a Bubble” seemed too brief, a complaint I rarely have when reviewing dance online! I’m always happy to watch “Seven Sonatas,” from 2009,and it was beautifully danced by Carlos Gonzalez, Luciana Paris, Devon Teuscher, and especially Herman Cornejo. But ABT II had just done the exact same excerpt last month, which seemed like a programming oversight.

The other two excerpts surprised me; both upended my expectations. Isabella Boylston and James Whiteside performed the pas de deux from “The Seasons,” which was made for them in 2019. “The Seasons,” a huge ballet to Glazunov’s score of the same name, left me lukewarm at its premiere. But in this case, the pas de deux was isolated from the big messy whole and stripped of its garish costumes, and it was a highlight of the night. Boylston wore a simple, flowing crimson dress and Whiteside was in rust-colored tights and a plain white blouse. What had seemed like busy-work to me before now read as expressively lush. And Boylston and Whiteside’s genial rapport and seamless execution were a real pleasure. These pared down costumes, like the attire for “Bernstein in a Bubble,” were uncredited in the program. Somebody had a great idea—I’m sorry I don’t know who!

On the flip side, I was looking forward to Brandt’s Rose Adagio, which opened the night. Her debut as Aurora was another casualty of the coronavirus. But this excerpt underwhelmed. One problem was that the dancers wore the elaborate costumes from Ratmansky’s traditional “Sleeping Beauty,” but there was no sumptuous scenery to frame them. Against an extra-bright purple cyclorama, the quartet of suitors looked like the Village People as rendered by Andy Warhol.

In the full-length ballet, the Rose Adagio—which is Aurora’s first entrance—demonstrates how beloved she is to the entire kingdom, and by extension the audience too. She must charm the whole theater for the narrative to work. Her emotional interaction with these suitors is not the focus. They are stock figures (and dated stereotypes at that, best not to look too closely); she must project far past them. Also, when there is a big set, big costumes, a big cast, and a big crowd, these steps have just the right density. Anything more would be overkill. But without all the stuff, and without the throngs onstage and off, the dance felt void and overly simple. It resembled a repetitive pas de deux class.

Brandt, to be sure, flawlessly executed every moment of it. But it almost looked too easy, in no small part because perhaps the most incredible dance video to emerge from the entire lockdown period was of her doing a Rose Adagio attitude promenade on pointe without any partner at all. Really, google it. Or don’t—just fast forward to that absurd, magnificent turkey trot.

Next
Back to the Barre